Kids, This Is Why You Make Sure You're Pen Works

Last weekend, The New York Knicks hosted various rallies all over New York City. They are in the Playoffs, facing the Boston Celtics and they were appearing all over the Big Apple getting New Yorker's excited about the possibility of a long playoff run which hopefully will cumulative in an NBA Title, the first for the Knicks since the 1972-73 season.

Looking on the Knicks official website, www.nyknicks.com, I was able to find out where, when and who was making apperances for the Knicks. The team was sending out former players to meet with fans, sign photos and hand out prizes. I found out that John Stark would be appearing at Traffic Sports Bar in Manhattan, while Larry Johnson, Anthony Bonner and the newest member of the Basketball Hall Of Fame, Bernard King, would be appearing at the Knicks Fan Fest, to be held the next day in front of Madison Square Garden before Game 1. I really wanted to get John Starks on a mini basketball then get King on a full sized ball and LJ on a mini.

I went to Traffic right after work. Starks would be appearing from 7:00 PM to 10 PM. There was a rap contest with bar patrons (some of the worst "rapping" I've ever heard), trivia contests and give a ways  That's was all good and well, but I was there to meet the man who once dunked over Michael Jordan and Horace Grant during Game 2 of the 1993 Eastern Conference Finals and won an NBA Sixth Man Of The Year Award, so I waited. And I waited. And, waited some more. Finally around 9:30, I asked one of the gentleman who worked for he Knicks if Starks had arrived and was told he wasn't showing up. Ticked off, I litteraly took my ball and went home. Not showing up for something you were scheduled to to appear at was so bad. I hope word got back to the Knicks that there was some upset fans who was looking forward to meeting him that night.

The next day, I got to MSG bright and early. I was not only hoping that Bonner, Johnson and King would show up, but I was hoping to get them to sign a couple of autographs. 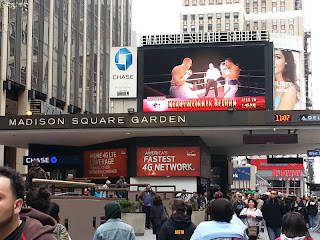 The Knicks Party Van was parked right outside 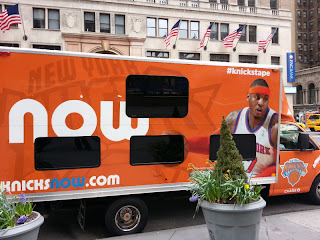 You know this is your team when it's your mug that's plastered on the side of the Party Van. 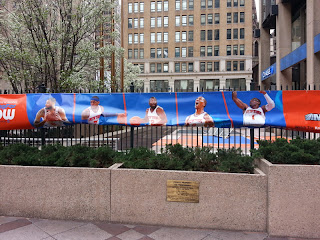 The Garden was decked out in blue and orange on this day. Game One was taking place inside the Garden at 3 PM that day. While there, you could get a Playoff buzz cut with the Knicks logo shaved into your head or have your face painted in blue and orange. A lot of kids showed up with their parents to take part in the festivities. The Knicks did this one right. 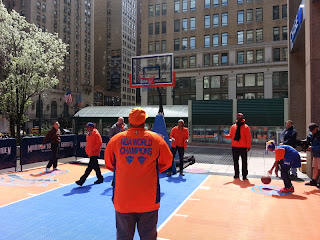 You could also shoot baskets for a chance to win Playoff tickets. I tried. I sucked.

There was an appearance by the Knick City Dancers 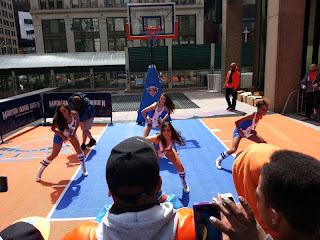 And by the New York Sticks who usually drum in between periods of games in the Garden to entertain the crowd. 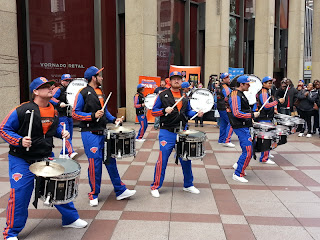 Or, you could try and dunk on this guy 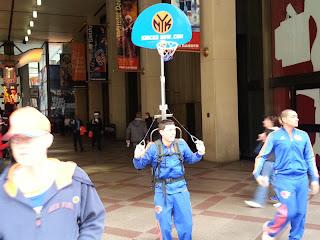 Finally, Bernard King, Larry Johnson and Anthony Bonner made their way to the basketball court area to meet the fans. With all the fans that was there, This could have been a mob scene, but luckily, I was able to get to King first and ask him to sign my basketball.

Now, I had looked high and low for a Deco silver paint pen for this occassion. Of course, I would have a better chance of getting punched by Mike Tyson as he sings "In The Air Tonight" than to find this elusive paint pen in NYC. So, I finally gave up and bought a Sharpie Silver and a Sharpie Gold Paint Pens. I had spent much of the morning prepping the pen, making sure it was working and it was all morning. That is, until Mr. King was handed the pen. After signing the ball, he handed it back to me. This was the signature I got. 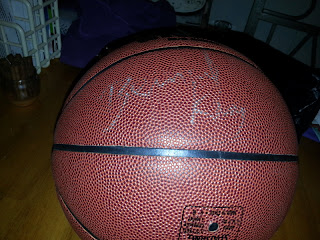 Curse you, Sharpie! I have been trying to get King to sign a basketball for years and when I finally get him, the pen craps out on me. Grrrrr. I have King sign my New York Knicks Official 50th Anniversery Book I am working on. He borrowed someone else's Sharpie. Surely, I would get a better signature in the book, right? 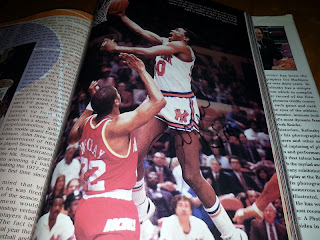 Nope. His pen crapped out on him as well. Close up of the autograph. 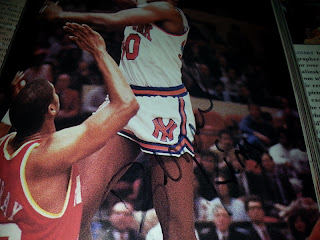 He signed the first page of the book, right under the book plate I had another brand new Basketball Hall Of Famer, Richie Guerin, sign. Why did he sign his last name first?

Then I finall got to LJ. I mke small talk with him, asking if we were going to see a return of Grand Ma Ma. He laughed as he attempted to sign the mini ball in the same black pen as King signed the book with. When that failed, he grabbed my garbage paint pen and quickly signed my mini basketball with it. 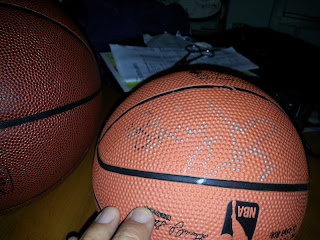 You may not be able to see it. Nor can I, for that matter. But I assure you, it's there.

At least we finally got the correct pen for him to use in the book. 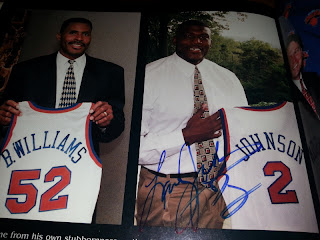 And that was that. I got my autographs and took off as it was getting more crowded. I couldn't even have taken a picture of the players if I tried. That's the hazard of free appearances. Everyone wants to meet the players, which is what they were there for.

Although I am very happy I met the players, I am quite disappointed at how the autographs came out. One you can barely make out and the other, not at all. So, now what do I do? Do I Goo Gone the autographs and try again, knowing that these players really don't make appearances all that often? Or do I just keep the autos, as is? I'm leaning toward keeping the King auto and cleaning off the mini and trying again for LJ with a better pen or someone different all together.

So, the morale of the story is, hunt down a Deco Paint Pen if you are going to get a basketball or football signed. Leave the Sharpies to photographs only. If you do not heed my warnings, you will end up like me, sitting on the floor of my apartment, wondering where it all went wrong. Shaprie no, Deco, yes!
Posted by Unknown at 9:09 PM