Recently, The Yankees announced that this season there will be 5 bobble-head give a way dates during the 2013 season at Yankee Stadium. 4 player and a second Snoopy bobble-head given away. Here are the dates:

I am not too crazy about this list as the Yankees have given away Jeter, Matsui and Rivera before. I would have like to have seen a CC, Cano, Teixeira or maybe a Mantle, Ford or Gossage bobble-head  Anyway, I won't complain too much. I'm just thrilled that the Yankees are giving away bobble-heads. Now, I don't have to look at Giants or Dodger fans green with envy.

The Yankees released a picture of the Derek Jeter bobble-head recently. Here is the Jeter: 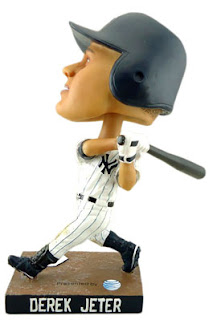 I have two thoughts. A-I hope this is not a mini bobble-head  B-I'm thinking this looks like the 3,000th hit. Maybe the Yankees are doing a great moments set, which might explain why we are getting a Matsui. Possibly, it could be one of him during the 2009 World Series or his Grand Slam during his first Yankee Stadium game. Rivera's could be him on the mound, tipping his cap after getting save # 602. Not sure what Yogi's could be. Yogi behind the plate? Been done already. I hope they come up with something good for Yogi.

I cannot wait until these bobble-heads are given away. I have been screaming and pounding the drum for the Yankees to give out bobble-heads again, especially since I missed out when they initially gave them out during the 2002 and 2003 seasons. I have been slowly picking those up off eBay. Now I am praying for sell outs so the Yankees will continue to give out bobble-heads each season. I'm still praying for a few players to add to my bobble-head collection, so I hope Yankee fans support these great give away and make it hard on the dealers who come out and hog up all the bobble-heads to sell.

Excuse me, I have to make room on my bobble-head shelf for the new arrivals.