One thing I love to do is to search the internet and find new blogs to read. I came across a blog called Drop The Gloves. There is a bat around blog where you are asked one question: How Would You Spend $1,600 For Cards On eBay? Here is the link to the blog: http://www.fightstrap.com/blog/2013/04/19/marathon-bombers-boston-and-a-contest/

Admittedly, I had a hard whittling down the list I came up with. I came up with so many cool cards. Cards I have always wanted to add to my PC's, but after playing around with the list a bit, I was able to come up with 3 cards I would kill to have in my collections. They cover teams and players I collect, both vintage and modern. Here are the three cards I chose 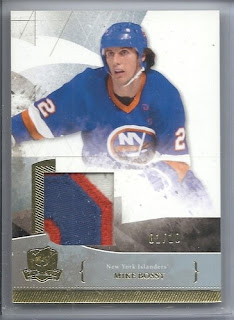 I have autographs and game used cards in my Bossy PC. But I do not have a patch card in my collection. The one I chose has a gorgeous three color patch from what was the home uniform. Back when I first started watching hockey many, many moons ago, the whites were the home and the colored were the road unis. I miss those days. 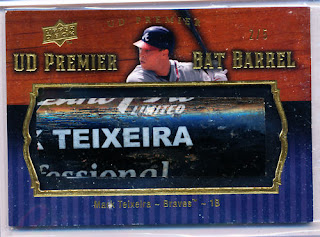 I know. For that price, I could probably own a whole Teixeira game used bat. But since we are just spending our theoretical $1,600.00 on cards, this would be one card I would absolutely love to own. I'm betting this was a piece of a bat used from his days as a Texas Ranger, but I do not care. I have always wanted to own a bat barrel card and the chance to own one from one of my favorite players would be too good to pass up. 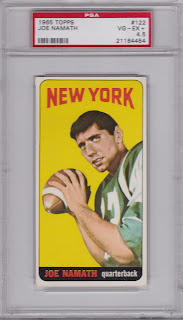 The number one card I have to buy before any other would be a 1965 Topps Joe Namath rookie card, the card to own from the 1960's. Originally, I was looking for a raw card as I generally do not collect slabbed cards. But the ones I saw were not in great shape, not that a grade 4.5 is. But this one looks better than the others and at the Buy It Now price, I could still pick up the other 2 cards for my collection. This card would be the centerpiece of my New York Jets PC.

So, there you have it. the 3 cards I would pick up if I could spend $1,600.00 on cards on eBay. I'm sure I probably could have gotten more if I played around some more, but if we are talking quality, then I don't think I could have picked a better 3 cards to add to my collection. Maybe one day, I will be able to. But for now, I will drool over these pictures.
Posted by Unknown at 6:11 PM