One of my goals for 2013 was to finally start building Knicks team sets. I have a bunch of Knicks cards, but I haven't had time to really put them into 9 pocket pages and binders as I have been concentrating on getting my Yankees and Jets collections into some sort of order. With the Knicks in the playoffs and playing well, I have been wanting to pick up some Knicks cards to add to my collection.

One of my other main goals is to pick up more vintage cards. I have been doing this with my Yankee team sets and my Jets, to some extent. Now that I working on building Knicks sets, I want to start adding vintage almost right off the bat. Luckily, I came across an eBay listing for 3 1972-73 Topps Knicks cards that could start me on my way toward my goals. After winning the auction for the extremely high price of $4.95, I got me some vintage. 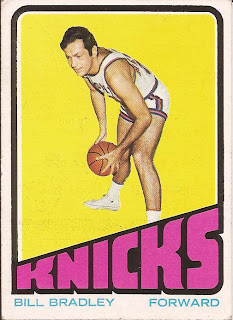 The first card I got was a Bill Bradley. The future Senator was a starting forward on 2 World Championship winning Knicks teams. He was also an NBA All Star, Had his number 24 retired by the Knicks and was inducted into the Basketball Hall Of Fame. He was backed up by a future coach who would go on to win 11 Championships as a coach, Hall Of Famer, Phil Jackson.

Right off the bat, I love the way these cards look. they just scream 1970's with the lettering and choice of colors. Then there is the lack of background. No arena, no crowds, not even a gym. Just a yellow background and the player in a "basketball" pose. I like the simplicity in that. Nothing to distract you from the player whose card you are holding. 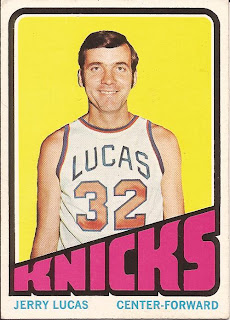 Probably one of the smartest players to have ever played for the Knicks. And I mean smart as in brainiac smart. As a player, he was a 7 time All Star, an NBA Rookie Of The Year, an NCAA Champion, won a Gold Medal in the 1960 Olympics and won a Championship as a member of the Knicks. He was inducted into the Basketball Hall Of Fame in 1980 and named to the NBA 50 Greatest Players. After his retirement, he wrote 3 best selling books and works as a educator and memory expert.

What strikes me about this card is the jersey. There is no orange New York across Lucas's chest, but his last name and number stands out. It's like the photographer told Lucas to turn the jersey around and wear it backwards. I'm sure Topps didn't have the licence to show the NBA team logos and uniforms, but this is ridiculous. They couldn't just wipe out the lettering? Still, it's pretty unique to see. 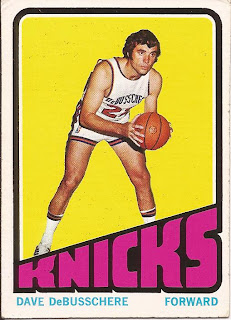 The last card I bought in the lot was a player who I have read so much about and has become one of my favorite players without my ever seeing him play a quarter. Dave DeBusschere was known as the missing piece of the Knicks puzzle. He was drafted by the Detroit Pistons out of the University of Detroit. He was traded to the Knicks for Walt Bellamy and Howard Komives. He won 2 World Championships with the Knicks, was an 8 time All Star and had his number 22 retired by the Knicks. He was also named to the NBA's 50 Greatest Players list.

My memory of DeBusschere was during the 1985 NBA Lottery, when the Knicks won the first pick of the upcoming draft, DeBusschere, who was the Knicks GM at that point, pretty much jumped out of his chair and banged his fist on the desk in front of him. The Knicks used that pick on a center from Georgetown named Patrick Ewing. I bet you didn't know that DeBusschere was also a baseball player, pitching 2 seasons for the Chicago White Sox. In those 2 seasons, DeBusschere went 2-3 with a 2.90 ERA.

DeBusschere's death from a heart attack in 2003 broke my heart, personally. It was around this time I was learning more about the 2 World Championship teams and how much DeBusschere meant to that team. I had hoped to have the chance to meet him one day, but unfortunately, I never got the chance to.

I am a huge fan of the 2 World Championship Knick teams. I love watching film about them and reading about them. I have always wanted to collect those 2 teams and now, with this awesome purchase, I have begun that collection.

The Knicks cards I am now needing from this set are:

Now, unless I am not looking at a complete checklist or there were no cards made of them, I see two big names missing, Willis Reed and Earl Monroe. Now, I'm not the most knowledgeable about basketball cards (just yet), so I am now wondering if there are cards of them in this set.

Not only do I need to hunt down the cards I am missing, but I need to find out the riddle of the missing Hall Of Famers. Riddle me this, Batman!

Oh, and the seller threw this in for free 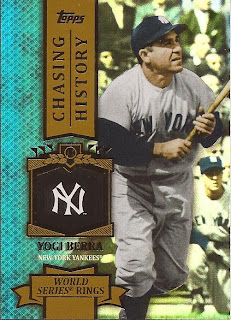 Come on, who doesn't love Yogi?
Posted by Unknown at 7:49 PM