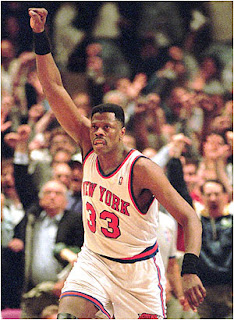 A couple of weeks ago, I posted a blog showing off cards from my David Lee PC. David Lee is one of my favorite Knicks of all time...but not the ultimate favorite. That honor goes to number 33, Patrick Ewing. I first became aware of Ewing while he was playing with Georgetown. I was watching St. John's basketball at the time and saw the epic battles between Chris Mullin and the then Red Men and Ewing and the Hoyas. Those were some great games, which Georgetown got the last laugh, winning the Big East Title that year. Ewing would go #1 to the Knicks in the 1985 NBA Draft and he became, arguably, the greatest Knick ever.

In 16 seasons, Ewing averaged 21.0 points, 9.8 rebounds, 2.4 blocks a game and shot better than 50% for his career. He was an 11 time All Star, an NBA Rookie Of The Year, an NCAA Champion, a charter member of the Dream Team which won Olympic Gold, was named to the NBA 50 Greatest list, had his number retired by the Knicks and was elected to the Basketball Hall Of Fame. All those accomplishments, but my fondest memory of Ewing was after the Knicks finally made it to the NBA Finals, Ewing jumped up on the broadcast table and celebrated with his arms outstretched. 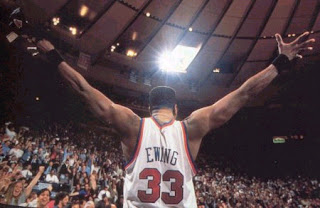 I saw a T shirt of that image made and I want it.

I started a Ewing PC a year ago and have been able to add some nice cards. No autographs and just 2 game used cards because Ewing stuff is pretty pricey. Most of the nicer Ewing cards I own are inserts, which is fine because I am a fan of inserts and the 90's had a lot of them. I'll show some of my favorites in a later post.

A couple of friends of mine recently sent me cards and in them were some pretty sweet Ewing cards. 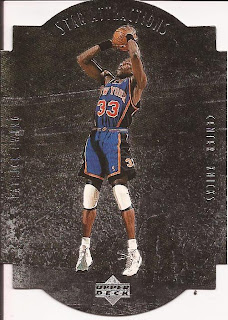 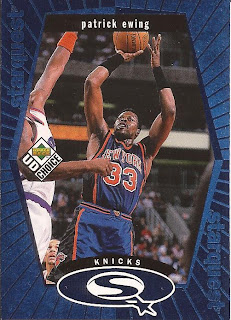 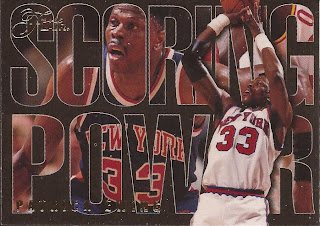 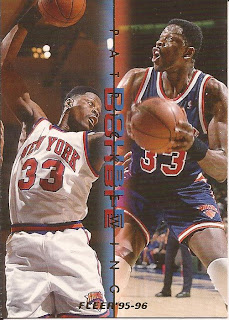 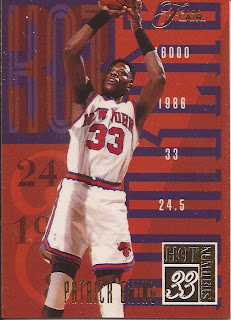 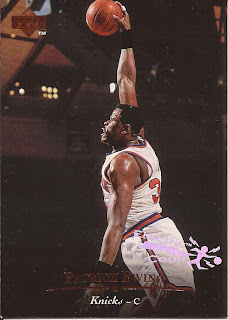 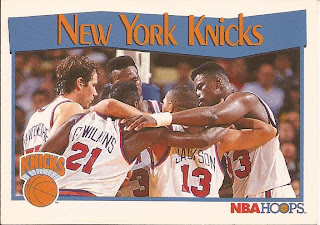 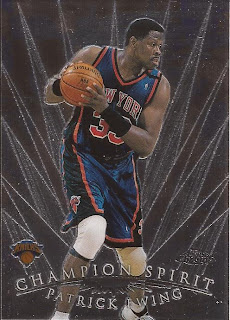 I got some really nice cards to add to the growing Ewing PC, so I'd like to thank my buddies for the new additions. I'm always looking on eBay and card shows for Ewing cards that I don't own. Would love to own a Ewing autograph one day, I'm always looking for deals on one. Ewing is not much of a signer, so his autograph is a good 2-300 dollars, which means my collection will not have one for quite sometime.

I got to see Ewing from the very beginning to the end of his career. Collecting Ewing is like reliving my youth when Ewing, Mark Jackson and Anthony Mason were running Madison Square Garden. No matter who comes along or if Carmelo Anthony wins an NBA Championship as a Knick, no one will replace Patrick Ewing as my favorite New York Knick.
Posted by Unknown at 7:34 PM