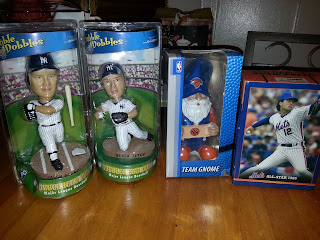 This was a pretty busy weekend for me, running around attending various Knicks functions, watching the Knicks beat Boston in Game 1 of the NBA Playoffs and attending a Mets game. I did find time to hit the post office and pick up some eBay bobble head wins.

I won these two Yankees Alexander Global Bobble Dobbles for a ridiculous price. 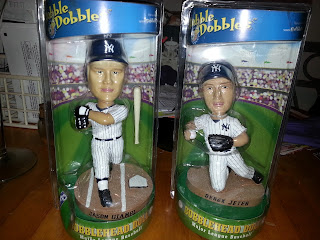 I initially bid on and won the Derek Jeter bobble and won it for about $7.00, shipped. The seller sent me an email asking if I was interested in a Jason Giambi Bobble Dobble for the low, low price of 4 bucks, shipped. So, less than a week later, these 2 beauties arrived at my postal box. Very pleased to be able to add them to the Yankees PC. Now, I might go after the set. I do love the Hideki Matsui and Reggie Jackson in this set.

Today, I went to Ron Darling Bobblehead day at Citi Field. Now, I am not a Mets fan, yet I do have a small collection of Mets bobbles. I picked up a couple of Mr. Mets and I have 3 of their SGA bobbles from last season. I'd like to say I wouldn't go out of my way for a Mets bobblehead, but going to Citi Field from my home in The Bronx, is kinda out of my way.

I meet my buddy, Mark in front of the Apple outside Citi Field. This apple is the one that used to be inside Shea Stadium. I will admit, it's pretty cool that the Mets have it outside Citi Field for the fans to snap pictures in front of it. This has become what the Bat outside the old Yankee Stadium used to be: a place for fans to meet before the game. When I meet up with Mark, he hands me this as a belated birthday present. 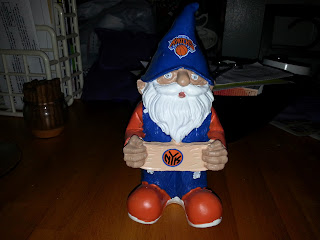 A Knicks Forever Team Gnome. Very cool gift. One that I am looking forward to adding to my small Knicks collection. I have an Allan Houston SGA bobblehead and a Knicks Christmas figurine. I'm still kicking myself for not picking up the Jeremy Lin Forever bobble I saw at Lids for 10.00.

But today's trip out to Mets-ville was all about getting the Ron Darling bobblehead the Mets were giving out. Darling was drafted by the Texas Rangers, but was traded to the Mets, along with Walt Terrell for Lee Mazilli. Darling was called up in 1984 and was one of their top pitchers until 1991. He was named to the National League All Star team in 1985, won a Gold Glove and was a member of the 1986 World Championship Mets. He is now considered one of the top color commentators in all baseball, working on the Mets telecasts as well as TBS nationally. Darling is rumored to be up for Tim McCarver's spot on Fox's Saturday Baseball telecasts, along side Joe Buck.

Let's check out the bobble: 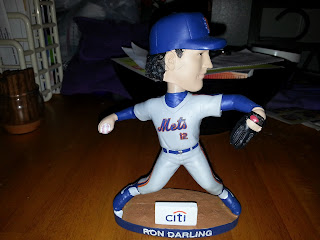 Citibank sponsored this giveaway. Ron is shown here in what I believe is the 1985 Mets road uniform. I was never a fan of this uni, I always liked the road uniform with "New York" in that classic lettering the Mets had and are using to this day. Another peeve I had with the Mets in the 80's was the racing stripe running down the side of the uniform. I know some fans like it, I just never dug them. Call me old fashioned, but I always liked the classic uniform with Mets across the chest and blue pinstripes. Hated the black Mets tops and the all-white unis they still wear. I do like the blue tops they wore in the 80's and they bought a similar jersey back for this season. 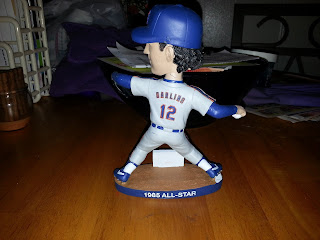 Here is the back of the bobblehead. Darling's number 12 and last name is on the jersey and the base says 1985 All Star. Why wouldn't that be on the front of the base? I think it would have looked a lot better there.

The bobblehead is nice. My only complaint is it really doesn't look too much like Darling. I do like that they used a uniform that is different from previous bobbleheads, even if I'm not a fan of it. I'm curious to see what the other bobbleheads that the Mets are giving out look like. The remaing bobblehead dates are:

Looks like the Mets are doing an All Star Theme, giving out bobbleheads of players who have played in an All-Star Game. Would make sense as the Mets are hosting this years All Star Game.

Funny side note, on the day the Mets gave out this bobblehead, Ron Darling wasn't even in the ballpark. He was in Baltimore, working the Orioles/Dodgers game for TBS. They probably should have given this out the Saturday prior. Would have been nice if he had thrown out the first pitch. Instead, it was his brother.