Five From The Collection: Martin Brodeur 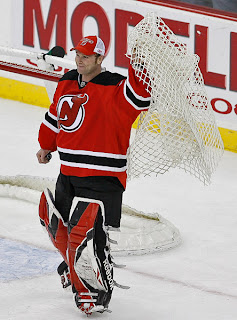 My hockey world was defined by two legends. As a child, Mike Bossy was my favorite hockey player. As an adult, it's been number 30 for the New Jersey Devils, Martin Brodeur. I have been watching Marty play with the Devils since his cup of coffee back in the 1991-92 season. I had started watching hockey again the year before and was looking for the next "Bossy". The next player to capture my imagination like Bossy had.

Brodeur did that for me during his rookie year of 93-94 when he finished 2nd in the NHL in Goals Against Average and 4th in Save Percentage, winning the Calder Trophy as the NHL Rookie Of The Year. He led New Jersey to the second best record and almost took them to the Stanley Cup Finals, but lost a heartbreaking (for me at least) Eastern Conference Finals to the New York Rangers (excuse me, I threw up in my mouth a little) 4 games to 3.

From there on, Broduer won 3 Stanley Cups and  4 Vezina Trophy's. He is a 10 time All Star and has won 2 Olympic Gold Medals. He has broken records and still continues to play at a high level even at the age of 40. He hasn't said if he is retiring at the end of this season or if he will play another year.

My favorite Martin Brodeur moment was watching him break Patrick Roy's all time wins record. I took the day, March 17th 2009, off from work and got to the Prudential Center (or The Rock) at 8 am for a 7 PM game. I had to wait on line for the 10 dollar seats. Lucky for me, I was able to score a pair and watch Marty beat the Chicago Blackhawks 3-2. To watch him cut the net was a thrill for me, one that I will never forget.

So, as you can imagine, I do have a Brodeur collection. It's not as extensive as I would like it to be. Broduer is a very expensive player to collect. Even a lot of his game used cards are usually sold over 10.00 on eBay. I am pretty proud of the stuff I do have. Here are my 5 favorites 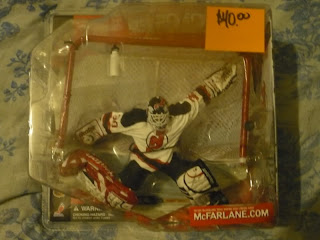 This Brodeur McFarlane was the first Sports Pick I owned. I loved this figure when I had it and had it prominently displayed at my desk at work. Unfortunately, someone either liked the figure and stole it or hated the figure and rubbed it out. Either way, it took me a couple of years to replace it. I found it at a comic book convention, of all places. Needless to say, I will not be taking this one to work. 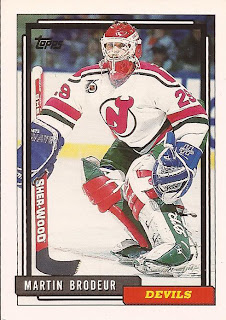 Love this Topps rookie card of Brodeur. Here, his number is not 30, but 29. He's got on an almost all red goalie mask, but most important to me, he's rocking the old school Devils jersey with green in it. I prefer the "Christmas Tree" jersey, which is red and green as opposed to this jersey, which was the home jersey at the time. I would love to see the Devils wear this jersey one more time before Marty retires. 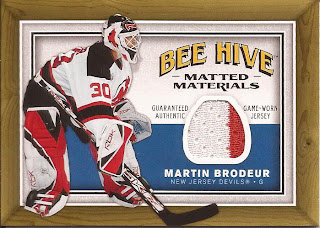 Sometimes, you will see a Brodeur game used jersey for under 10.00. When I do, I usually jump on it. I did with this card, winning it for 4 bucks. Love that its a 2 color swatch, probably taken from either the arm of the jersey or the bottom. Either way, this is a cool card and I'm glad I have it. 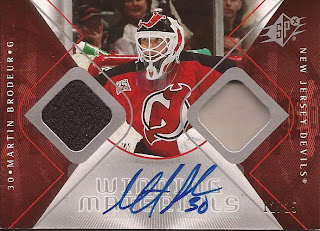 I don't own very many Brodeur signed items. Including the card above, I have 3 cards, a 5x7 photo from an apperance at the NHL Store in Manhattan and a huge group picture of the 2002 Stanley Cup team that bears only his signature. The above card was not cheap either. I was rocking my Brodeur home jersey at a card show when a dealer called me over to is table. He took out this card and told me he had just bought it and asked if I was interested in it. I didn't have a Brodeur autograph at that point, so I was extremely intrested until he told me he wanted 100.00 for it. I said no thanks and started to walk away. He called me back and asked me what I was willing to pay. I told him 50.00, still a hefty price for me. He counter offered with 75.00 to which I told him 60.00. He said he wanted the card to go to a Brodeur fan and sold it to me at 60.00. 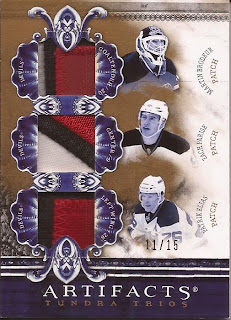 Probably the coolest card in my Brodeur collection. I really dig this sick triple patch card of Brodeur, Parise and Elias. I traded Malkin autograph card to get this baby. A steep price to pay, but so worth it. It's a trade that made both parties happy as the kid who got the Malkin is a die hard Penguins fan, so I felt good trading it to him for this. What a filthy card. God I love it!

I would love to one day own a game used stick of his. That is the holy grail for my Brodeur collection. I would also love a signed puck and jersey as well. Like I said, he is an expensive player to collect, but I do hope I can be abe to add these items to my collection one day.

It's sad how little attention Brodeur get in this area. He is one of the greatest players to ever play the game and should be revered like Mariano Rivera, Derek Jeter, Mark Messier and Lawrence Taylor is, but because he played in New Jersey his whole career, he goes largely unnoticed in NYC. It's too bad. When Brodeur retires there will never be another like him. I guess the best way I can pay tribute to him is to continue collecting and watch him play until he skates off the ice for the final time.
Posted by Unknown at 8:41 PM