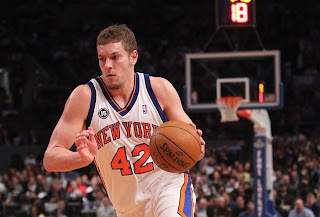 Tonight, The Knicks won the Atlantic Division crown and the magic number for sewing up the number 2 seed in the playoffs is down to 2. As I celebrate this achievement, I find myself looking out west and keeping an eye on the Golden State Warriors, who right now are in for the 6th seed, yet haven't locked up a playoff spot. I am hoping they do soon. My current favorite player is on that team and I would like to see him get to the playoffs as well.

As you can guess, I am talking about David Lee. I have followed his career since his first year in the NBA. This guy was, and still is, good for a double-double every night. He hustled, fought for the ball, and was one of the better rebounders in the league. I remember in a double overtime against the Bobcats, he scored the game winning basket on a tip in with 0.1 seconds left on the game clock. He got better every year, but for some strange reason, when his contract was up, the Knicks signed Amar'e Stoudmire, he of bum knees and bad back and traded Lee to the Warriors. I consider that one of the dumbest moves the Knicks made in a while. Lee has averaged 18.6 points a game with 11.30 rebounds per game this season, while Amar'e has been injured much of the season. I know a lot of people like to say the Knicks don't get Carmelo Anthony if Lee is a Knick, which I disagree with. Anthony wanted to come here and would have even if Lee was here. My only fear is Lee would have been included in that deal.

I started collecting Lee cards during his time with the Knicks. I have kind of stopped because I focused on other things, but would still pick up the occasional card here and there. Lee is very affordable, so I know I can, and will, start picking up a lot of his cards in the very near future.

Here are my 5 favorite cards in my David Lee collection. 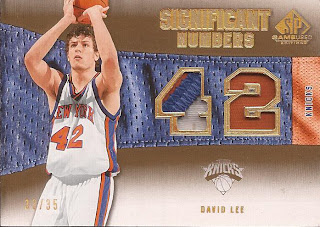 I'm a huge fan of patch cards. I love the Knick colors and I think they look great on card. Here's a pretty nice one. I picked this up off eBay pretty cheap. In fact, almost all of the David Lee prime cards (autographs and game used) I picked up were under 10.00, with the exception of 1, which I will show later. 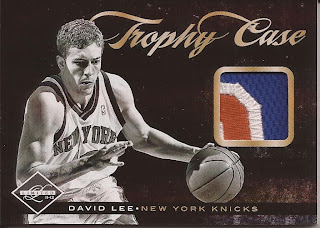 This one is one of the more recent cards I picked up. Gorgeous 3 color patch. Love how the orange, white and road blue look on this card. Saw it and had to have it. 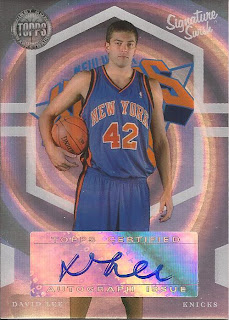 Love this Topps Front Row autograph. The silver card with the Knicks logo behind Lee in the background looks great...and shiny. I like shiny cards. Lee's autograph is a simple D-Lee, which is fine because that's his nickname. Of course, you want the full name, but I have seen worse autographs. 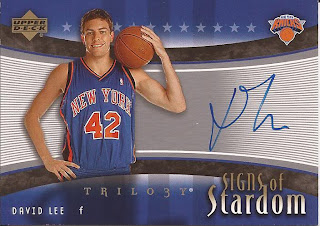 This Upper Deck Trilogy Signs Of Stardom is one of my very favorites because it was the very first David Lee autograph I picked up. Real cheap too. 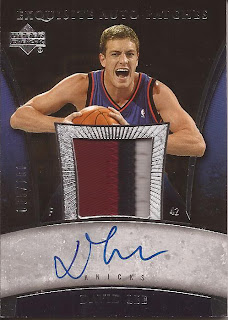 This is my favorite David Lee Card. As you all know, Exquisite is one of the more expensive cards you can buy. I have seen this card on eBay recently for about 120.00. Remember when I said there was one card I paid over 10.00 for? This was the one and I paid the astonishing price of 12.00. How I got that deal, I will never know but I am happy it's in my collection.

I want to add more Lee to the collection. I do not have a card of him in a Golden State uni. My original intent was to collect his Knicks cards, but I am willing to grab some Golden State ones as well. I would love to add an autographed Knicks jersey, signed ball, 16x20 signed photo and maybe a game used shoe, signed.  Maybe one day I can. I have been hunting for a Lee jersey or T-shirt, Knicks, that I can wear and replace my Marbury jersey. Yes, I have a Marbury jersey.