This One Bleeds In From The House Of Swag 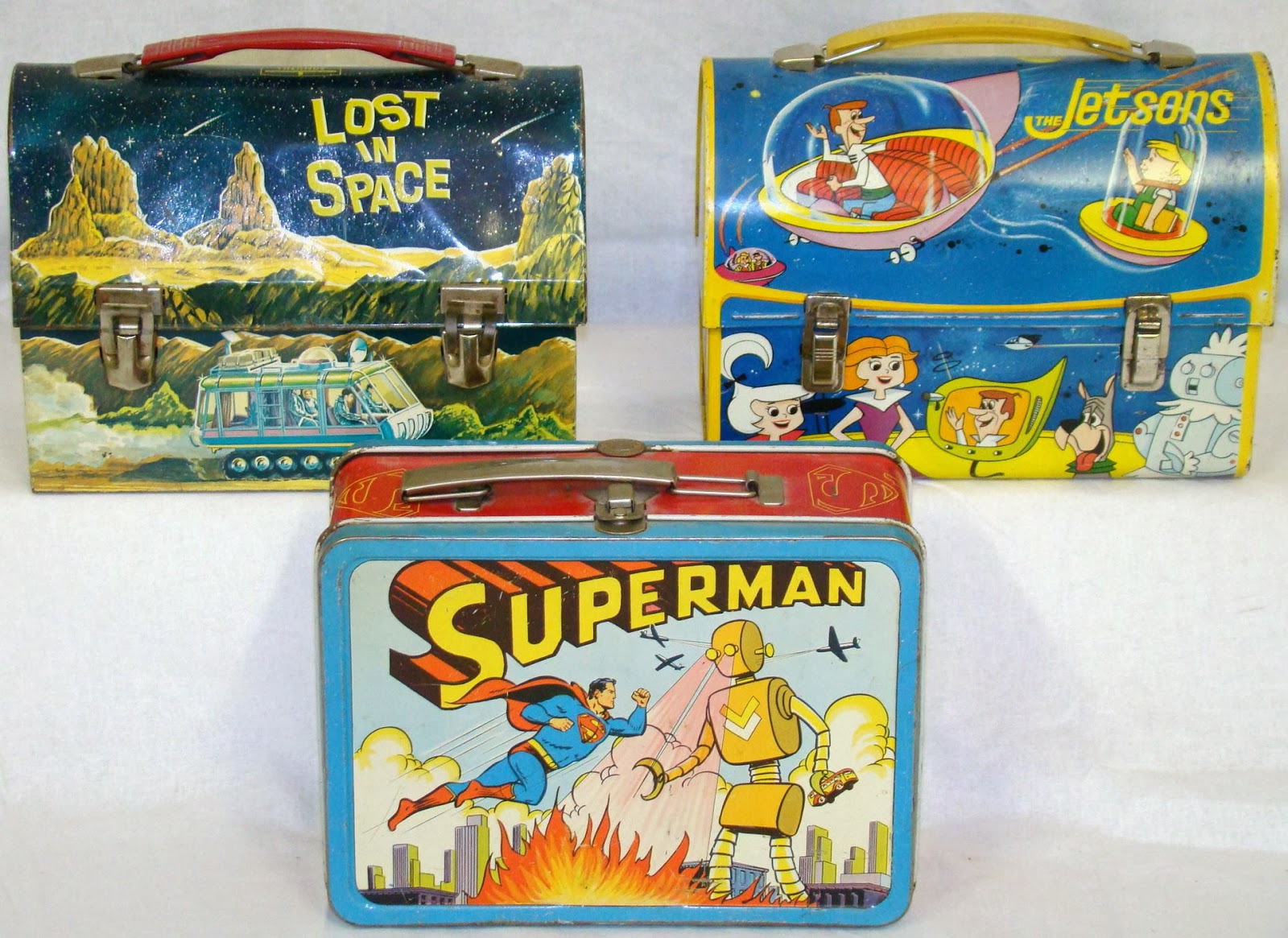 A couple of days ago, I posted on the Sports Room's brother blog, The Sexy Geek's House Of Swag, about an item I had been long interested in starting a collection of. If you can't what that is by the picture above, that item is lunch boxes.

While writing about them, I started thinking if there has been any sports lunch boxes I have come across in my youth and it triggered some memories that I had buried in the deepest regions of my brain. I HAD come across not one sports lunch box, but two of them in my days. 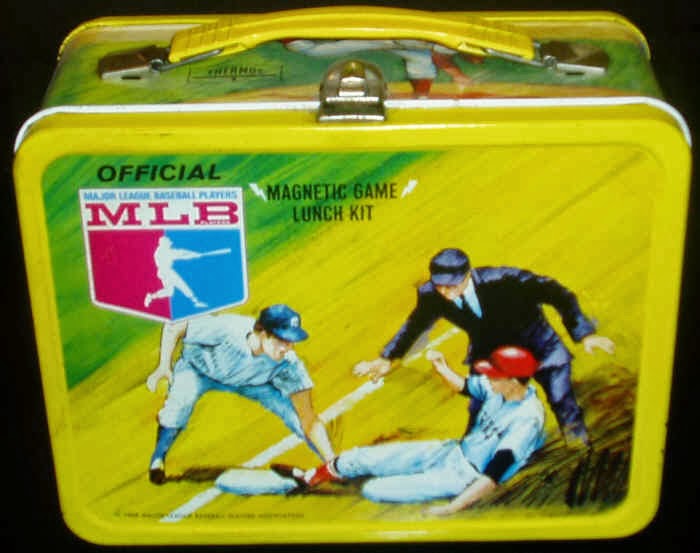 At the school I attended as a youngster, there was this MLB lunch box just lying around somewhere. The counselor who was assigned to my group either felt bad for me or got sick of my constant yapping about these cursed things and would let me play with this lunch box. I say play because if you look on the back of it... There is a picture of an infield, a scoreboard and one lonely outfielder. I used to take this lunch box and play an actual 9 inning game with a spitball and a pencil. I recorded the outs, hits, strikeouts, walks and everything in between. I even had my own team, the Bronx Bombers. Yeah, not very original, I know. The team was made up of my friends and I and I would keep stats for each one of us and pad my own stats. I think I had 100 home runs one year. I even designed uniforms for us.

I would love to grab this lunch box. Obviously, the memories of the hours of joy playing the game in the back has something to do with it, but I just love the lithography on it. On the front, you have an obvious picture of a Red Sox player sliding into third base while a Yankee player is administering the tag (He was out, ump!). The side panel on one side has a Baltimore Oriole swinging a bat (Frank Robinson, maybe?) and the top has a pitcher at the tail end of making a pitch. If I had to guess what team he could be from, I'm guessing he's a Cardinal.

Moving on to a different sport, I also seem to recall a buddy of mine, a Steelers fan, if I remember, having this awesome lunch box. 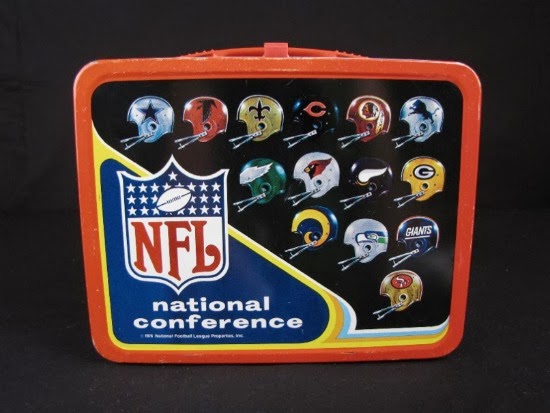 This is really cool. What it has that the baseball one doesn't have is official logos, or helmet logos in this case, of all the teams that were in the National Football League. I had fun looking at the helmets on this lunch box, trying to count how many teams still were using the same helmets that was on this 1970's lunch box. On this side, The Cowboys, Saints, Bears, 'Skins, Lions, Cardinals, Vikings, Packers and Niners all have just about the same helmets.

These football lunch boxes must have sold well because during the 1960's and 70's there has been numerous NFL lunch boxes offered for the fans to pick up. 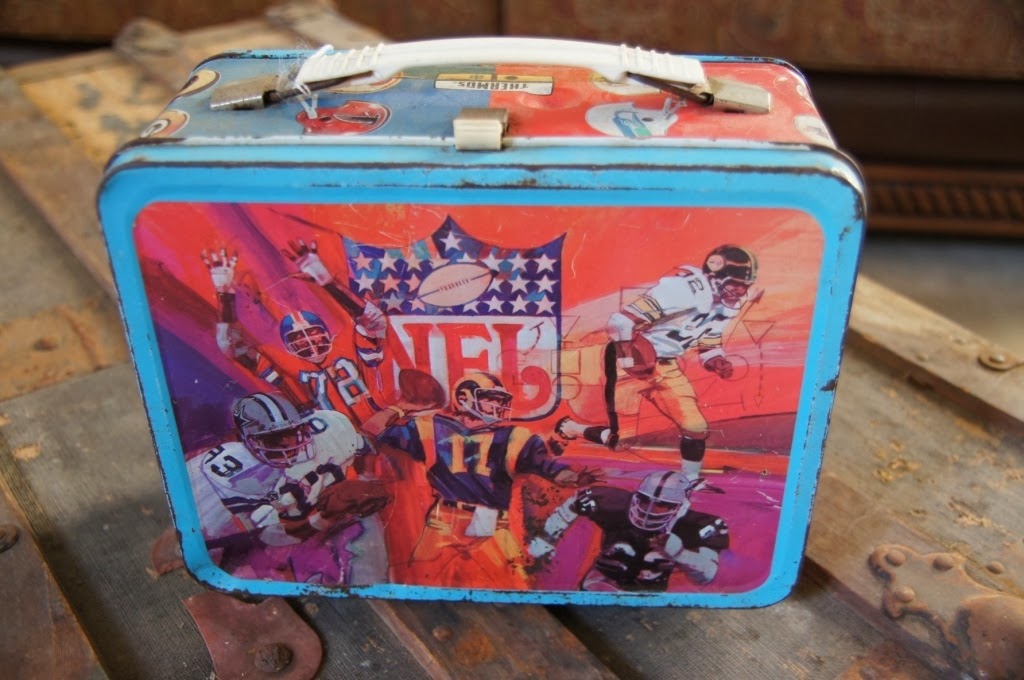 Here's one from 1978. I love the painted action shots n the front of the lunch box.  The Cowboys, Steelers, Rams, Raiders and Broncos are all represented here. Where is my team? 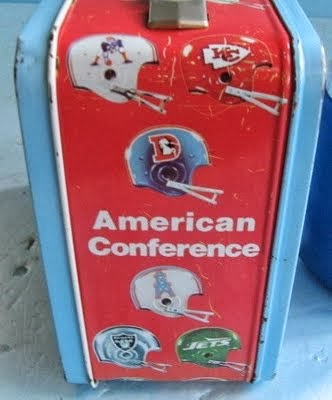 Right under the Houston Oilers helmet. 1978 was the year of this lunch box as well as the first year the Jets wore those helmets. I wish they would wear them again as alternates instead of the Titan unis. 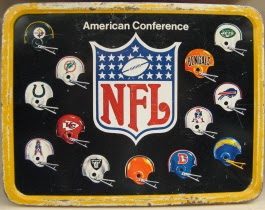 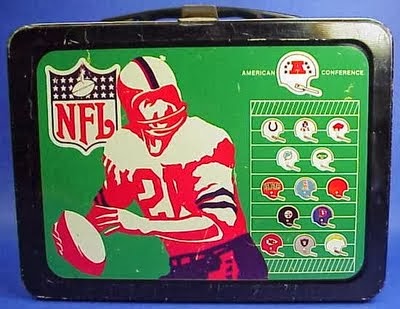 Here's one from 1973. Love the blue Oilers helmet on this lunch box.

There was one other from the early 1960's that I couldn't locate a picture of, unfortunately. I have seen it before. What I remember of it, it had a drawn action shot of a QB from the Bears dropping into the pocket while his offensive linemen tried to stop the blitz from the Green Bay Packers. 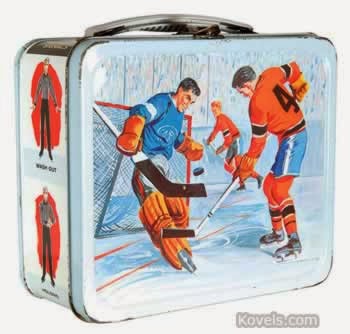 Borrowed that one from Kovels's site. 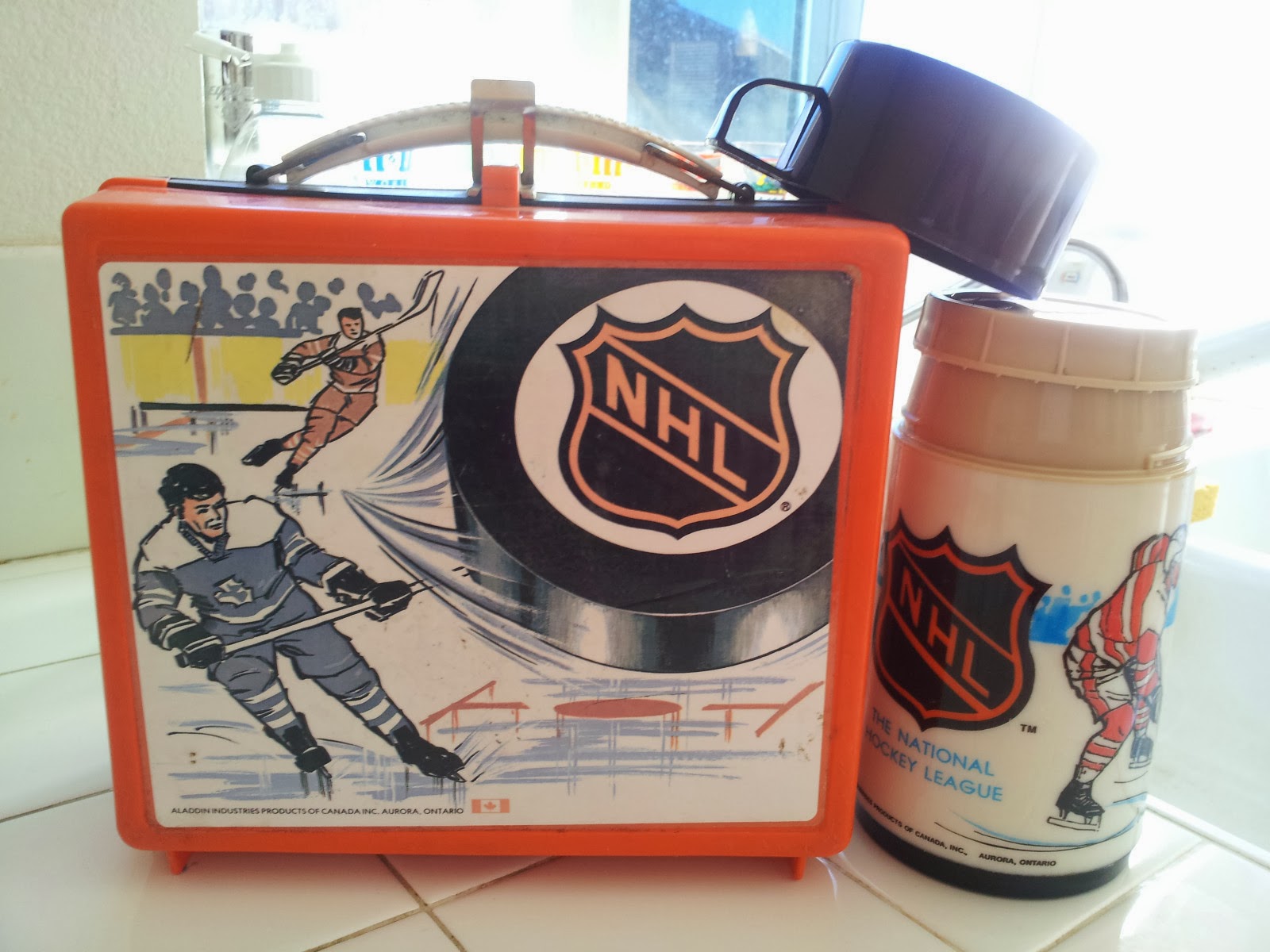 NHLPA had lunch boxes of their own 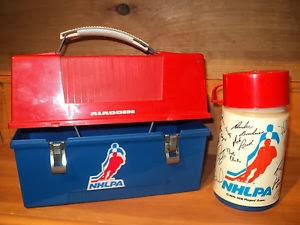 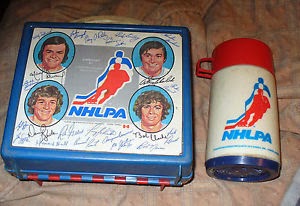 And the players had lunch boxes of their own. Bobby Orr had a few all to himself. 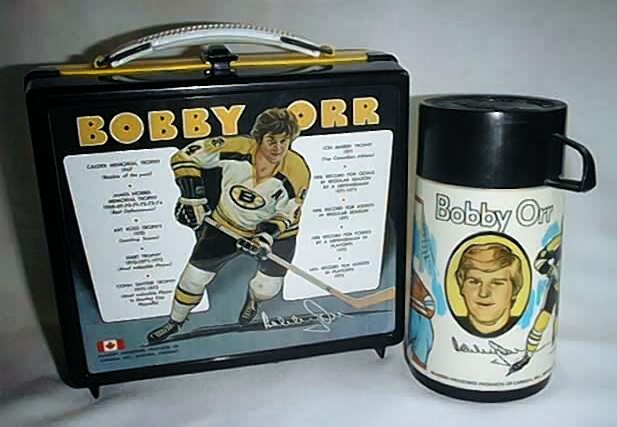 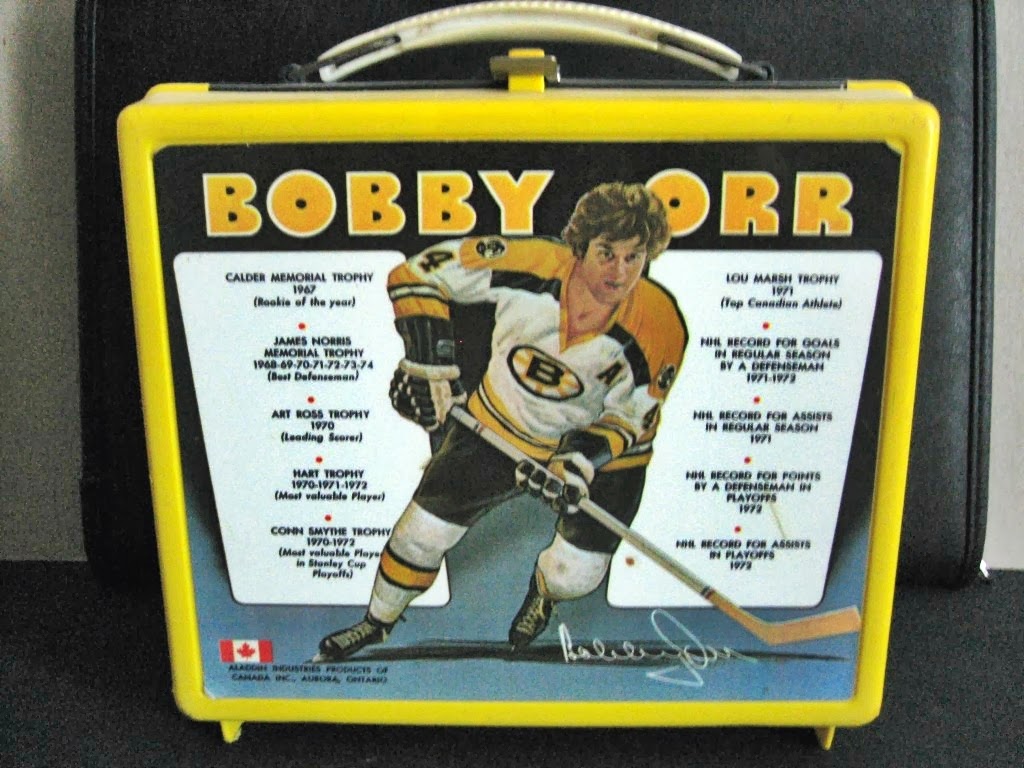 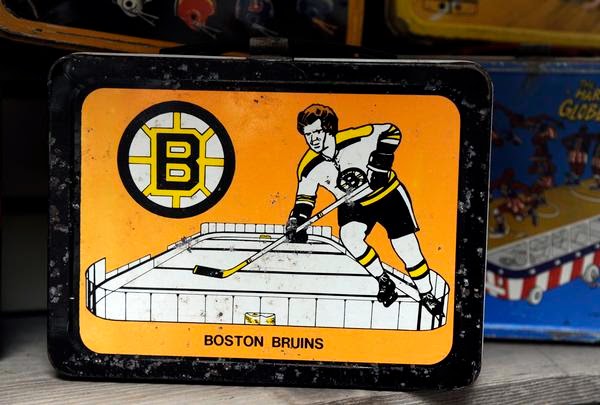 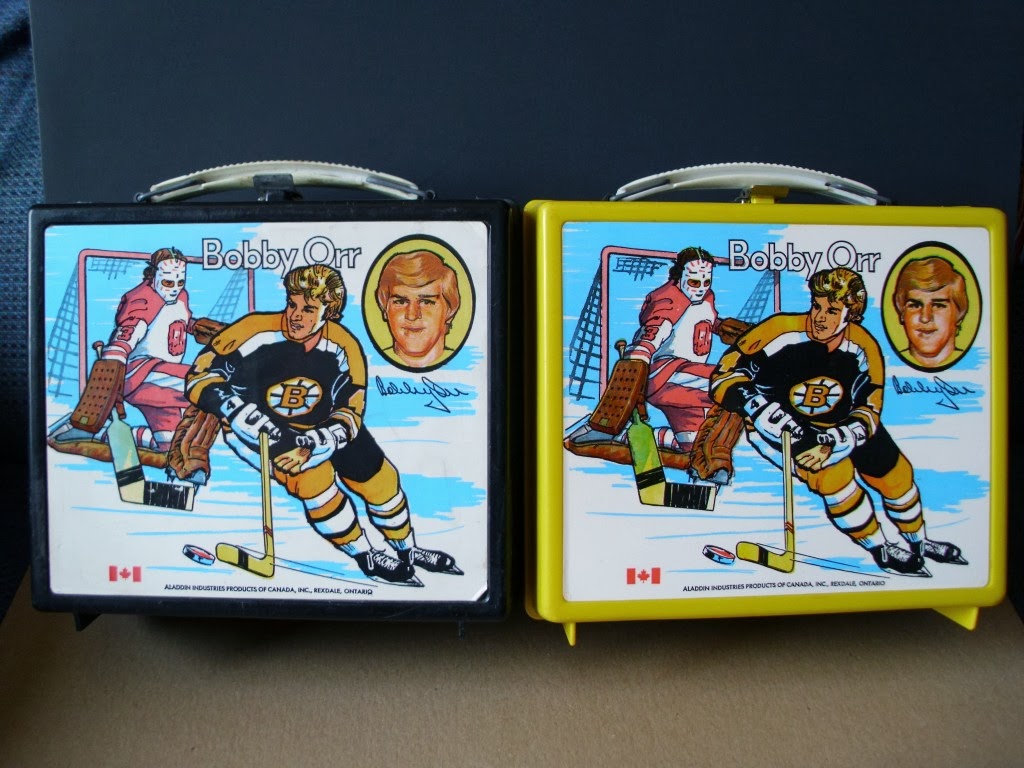 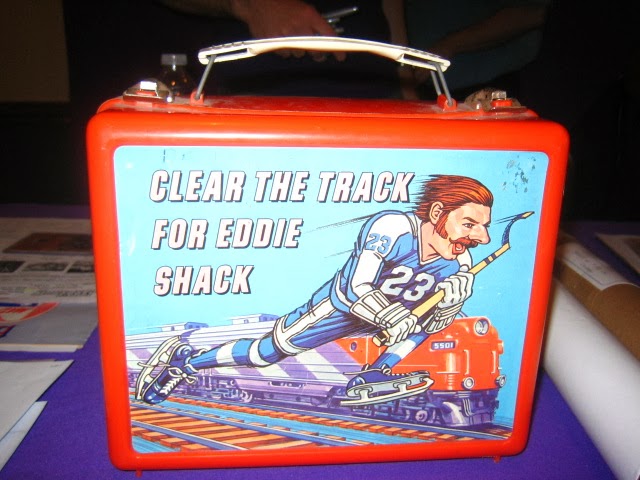 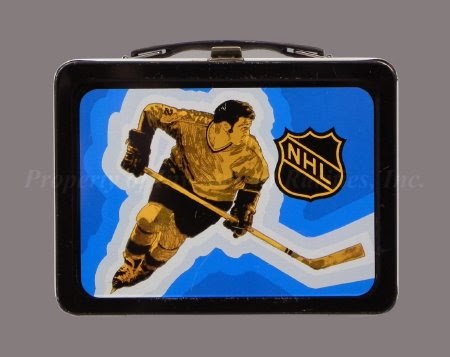 Not an official player lunch box, but you can clearly tell that's Phil Esposito. 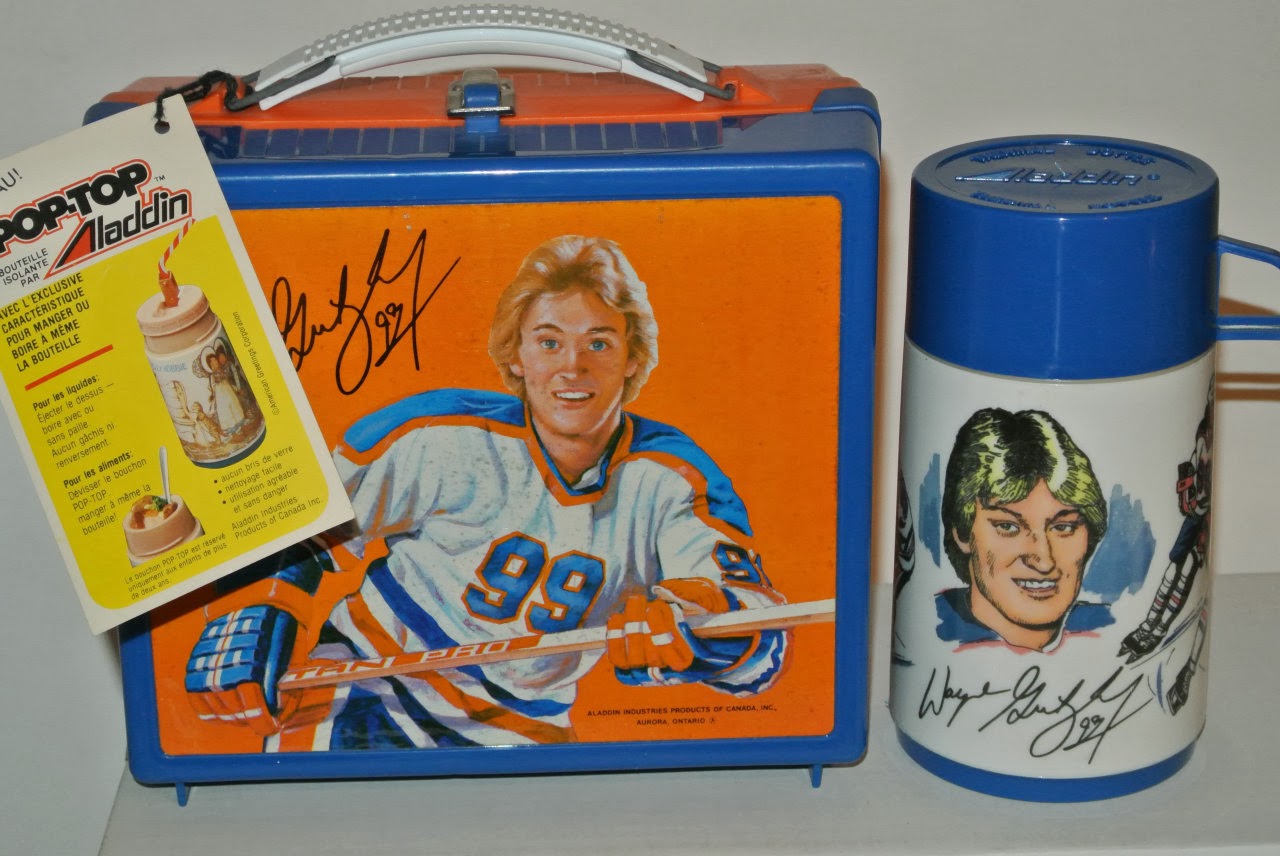 Of course, Wayne Gretzky has to have a lunch box of his own.

Shockingly, I could not find any examples of any vintage NBA lunch boxes. I would have thought with popularity in the NBA growing during the 60's and 70's, there would have been some lunch boxes produced, even if it was of players like Wilt Chamberlin, Jerry West, Walt Frazier, or Oscar Robertson. Aside from a Harlem Globetrotter one, there was nothing from basketball.

I did find one for you soccer fans. I remember when Pele came to New York to play for the Cosmos. It was huge. I knew absolutely nothing about soccer, but when Pele played, I would watch the games. That's when I realized that soccer was not for me. I would give the sport a few more shots during various World Cups, but it just doesn't tickle my fancy.

So, as you can see, if you're a collector of a sport, team or player, chances are there was a lunch box produced that would nicely into your collection. The prices on these vary. They depend of if there is a thermos and condition, but most could be had for around the $50.00 mark. If you have the means, I would definitely suggest grabbing a few to add diversity to your collection.
Posted by Unknown at 3:42 PM