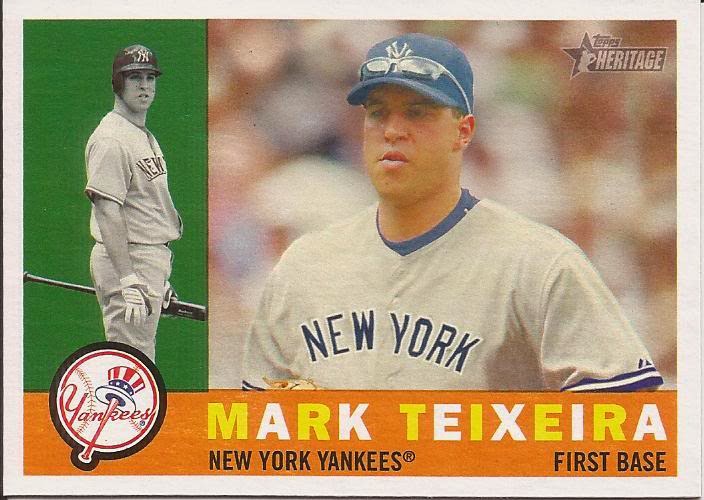 One of my favorite releases of the year is always Topps Heritage. I love vintage stuff. Cards, toys, comic books, magazines, old black and white movies, 1950's and 60's Rock N' Roll are just some of the things I love. My buddy claims I have an old soul. It's either that or I just realize some things were better back in the day. That isn't to say I don't love the modern conveniences we have today. I guess you can say I love classic with a modern twist.

That's why I love the Heritage sets so much. A classic card design with modern ball players. Ever since Topps introduced the line back in 2001, I have tried to complete the Yankee team sets of this series. I do have some work on some of the sets, but I do love the thrill of the chase and I will continue to chase the cards I need to complete my Yankee sets.

The past few weeks I have been doing a lot of card organizing. I am creating binders for certain sets and on Sunday, I worked on my Heritage binder. Looking through the binder once it was done was pure enjoyment. To a lot of people, organizing can be a chore, but when it comes to my cards I find that it's a relaxing way to spend a weekend day. Put on some music and it makes the day that much better.

The 2009 Topps Heritage set was based on the design of the 1960 Topps set. 2009 was Teixeira's first season with the Yankees after signing a 8 year, 180 million dollar contract with the team. Usually, you get your first glimpse of a player in new duds in the Heritage set where the company will super impose the team colors, logos and whatever else on to the player. You can clearly see it in the photo above. The New York looks small and funny as well as the interlocking NY on his cap. I don't care how funny it looks, I love this card.

The moment Tex became a Yankee, I knew I would be collecting his cards. I was a fan of his when he was in Texas but I never collected him. The moment he put ink to paper I was on eBay looking for cards of his to buy. When this set came out, I was thrilled to have my first Teixeira card in pinstripes.

Even if the NY was Photoshopped.
Posted by Unknown at 10:11 PM