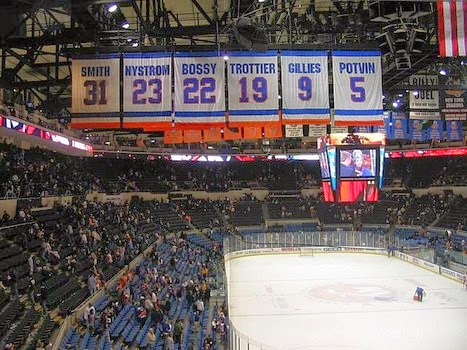 There has been no official announcements made, but today on the team's website, it looks like the team will be bringing back from their Stanley Cup winning teams as well as celebrating players and milestones from each decade. Plus the team will be hosting Fan Appreciation Nights as well as holding open practices.

You can read what the team posted, as well as watch a video posted by the greatest goal scorer in Islanders history, Mike Bossy, here: http://islanders.nhl.com/club/page.htm?id=97075

It looks like it's going to be a fun and emotional season for us Islanders fans next season. As excited as I am for the move to Brooklyn,  I am going to miss watching the team on Long Island. I am going to enjoy this as much as I can before the puck is dropped on the ice for the last time.
Posted by Unknown at 4:14 PM