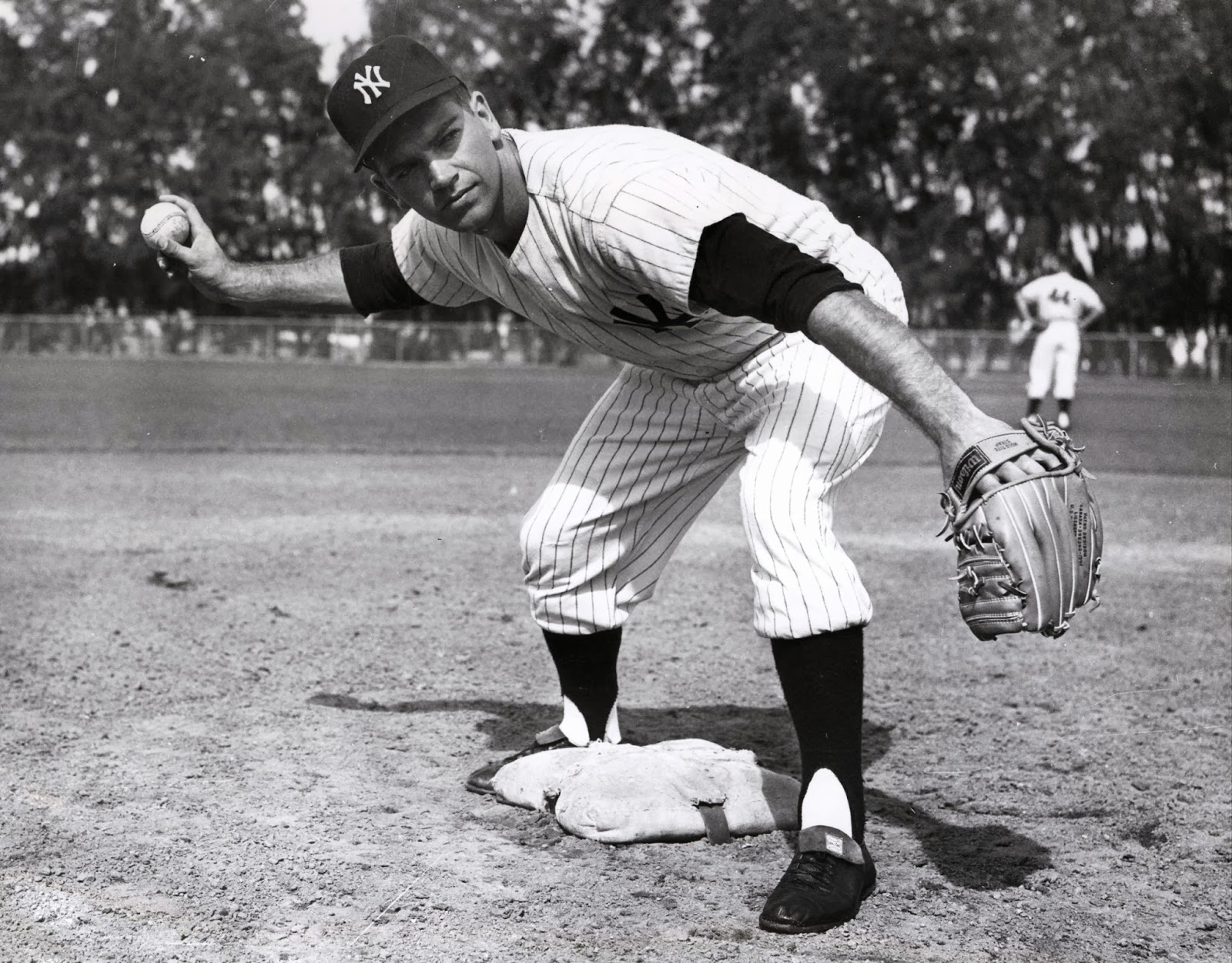 To me, Bobby Richardson is one of the unsung heroes in Yankees history. Sure his stats are not up there with Mickey Mantle or Roger Maris or Yogi Berra or any of the other Yankee stars in the years he played on the team. But he was one of the better defensive second basemen of his era, winning the Gold Glove award from 1961-1965. He also led the American League in his in 1962 with 209, while batting .302 with 8 Home Runs and 59 RBI's. He finished 2nd in the voting for the American League MVP to Mickey Mantle that year.

He won 3 World Series with the Yankees, winning the MVP of the World Series in 1960, becoming the first player to be voted as MVP from a losing team after hitting .367 with 12 RBI's during the Fall Classic. He also caught the final out of the 1962 World Series, which was a hard hit line drive off the bat of Willie McCovey. Had it been hit a bit higher, San Fransisco would have won the World Series. In the 1964 World Series, Richardson tied a World Series Record with 13 hits in a Series.

I have been lucky enough to add 3 different Bobby Richardson autographs in my Yankees collection. All three are items I cherish and would not part with for anything. 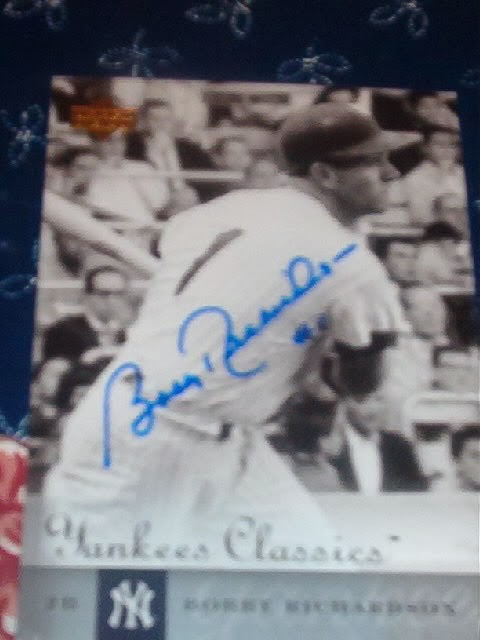 The first autograph I got was a through the mail signature, sent to Bobby's home address. Richardson has always been a great signer through the mail and I was able to get him to sign this 2004 Upper Deck Yankees Classic card. If I remember correctly, this card only took a couple of weeks to get back to me. 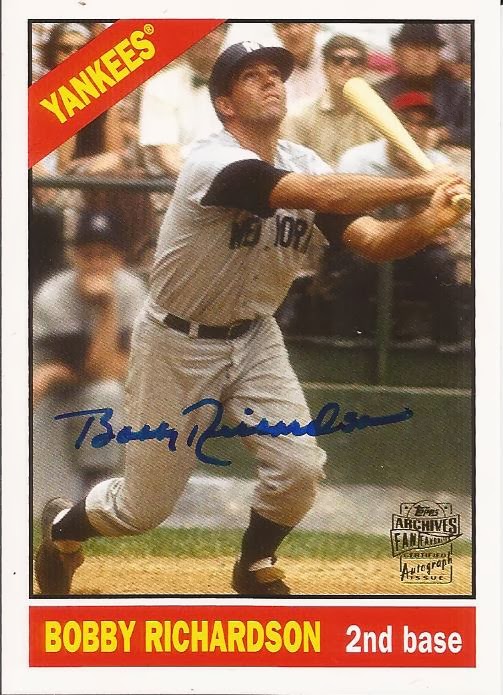 The second autograph was a gift from one of my fellow team collectors. Within a package of Yankee cards, sat this gorgeous 2012 Topps Archive on card autograph. I love this card because A-It's an on card autograph. B-It has that vintage look to it and C-Richardson has a terrific looking autograph and it shows beautifully on this card. 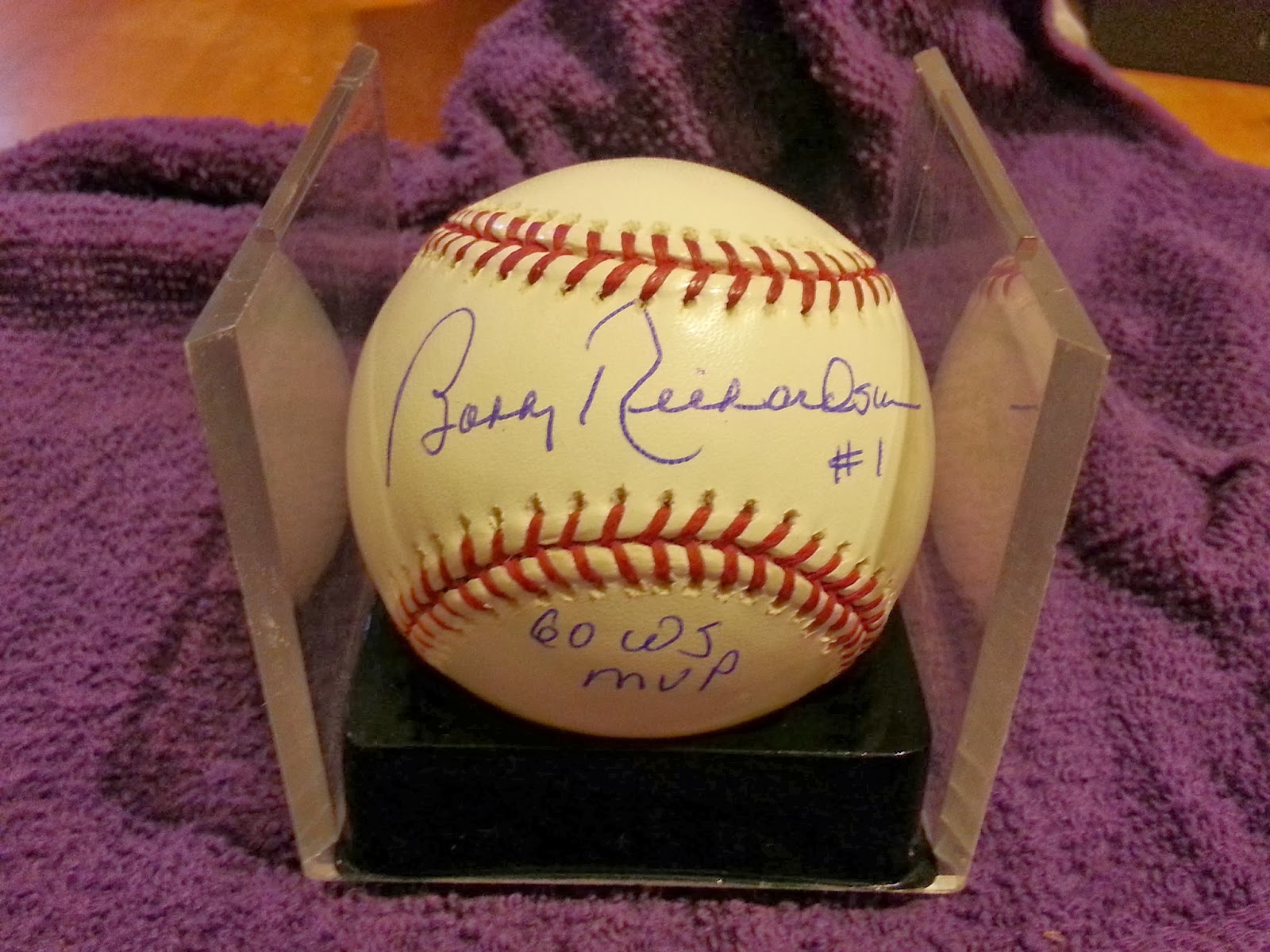 My third and final autograph is an in person autograph. Last year, Richardson was appearing at the Westchester Sports Card Show, so I decided I wanted to have a chance to meet Bobby and have him sign a baseball. Richardson was a little bit late, but when I met him he was very pleasant to talk to. We discussed that famous catch of his to close out the 1962 World Series. He told me he gets grief from McCovey whenever he sees him about that catch. McCovey always asks him if his hand has stopped hurting from making the catch. Richardson signed the baseball and added the 1960 World Series inscription without even my asking. He is a class act.

I will always be more than happy to add Bobby Richardson items to my Yankees collection. I am working on some sets and his autographs are missing from them and I am always looking for Yankees vintage cards to build my team sets and his cards are definitely on my radar. Richardson may not have been the most famous Yankee, but he was a solid player and as clutch as they came. He will always be welcome in my Yankees collection.
Posted by Unknown at 3:38 PM