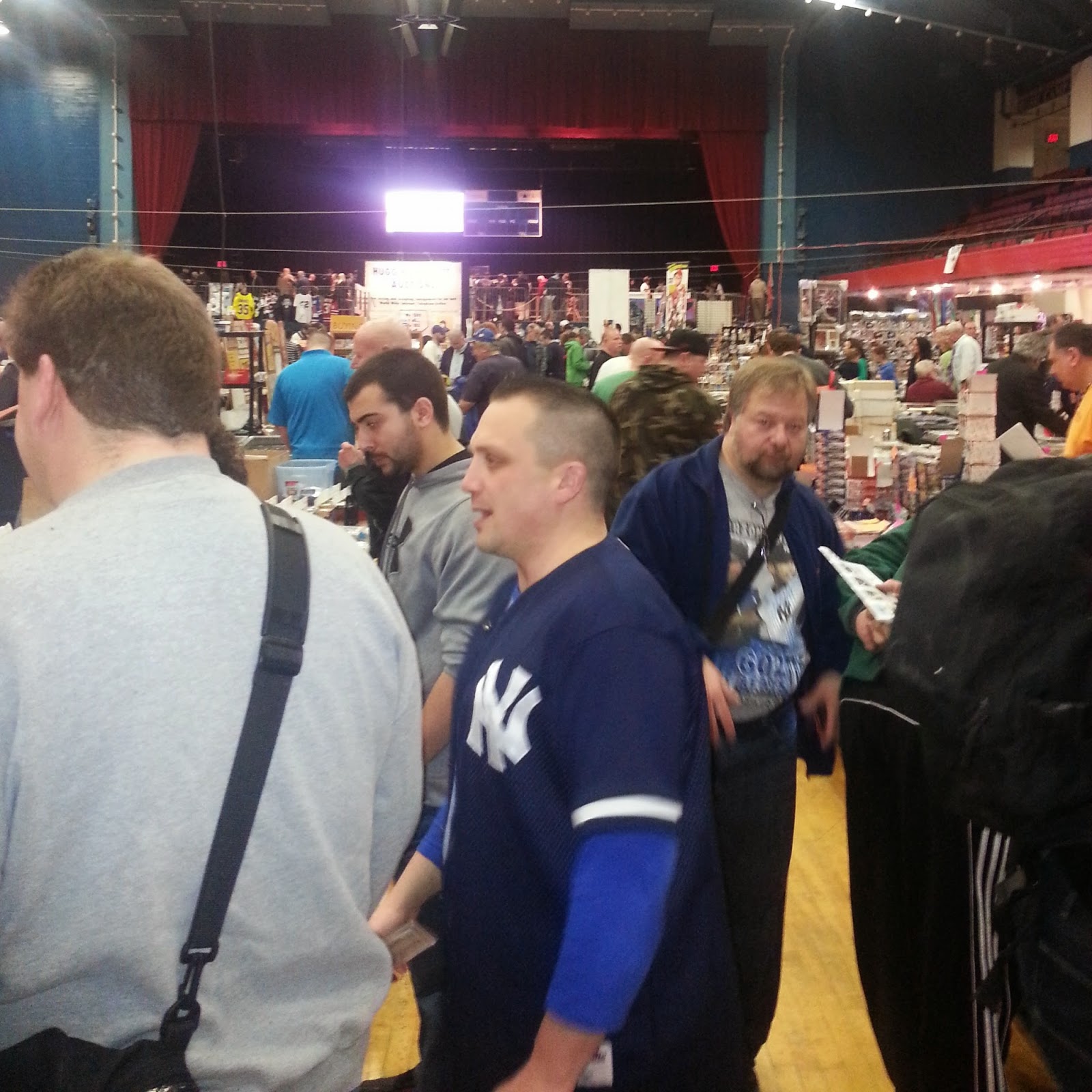 I attended the Westchester Sports Card Show at the Westchester County Center today. I originally wasn't planning on attending, but my buddy, Victor, wanted to get Mariano Rivera, who was appearing at the show, to sign a piece for him, so I agreed to attend. Rivera was a 300.00 autograph so there was no way I was getting to meet him today. I am confident that I will meet Rivera someday soon. But for today, I made due with meeting former Texas Ranger and New York Yankee, Ruben Sierra. 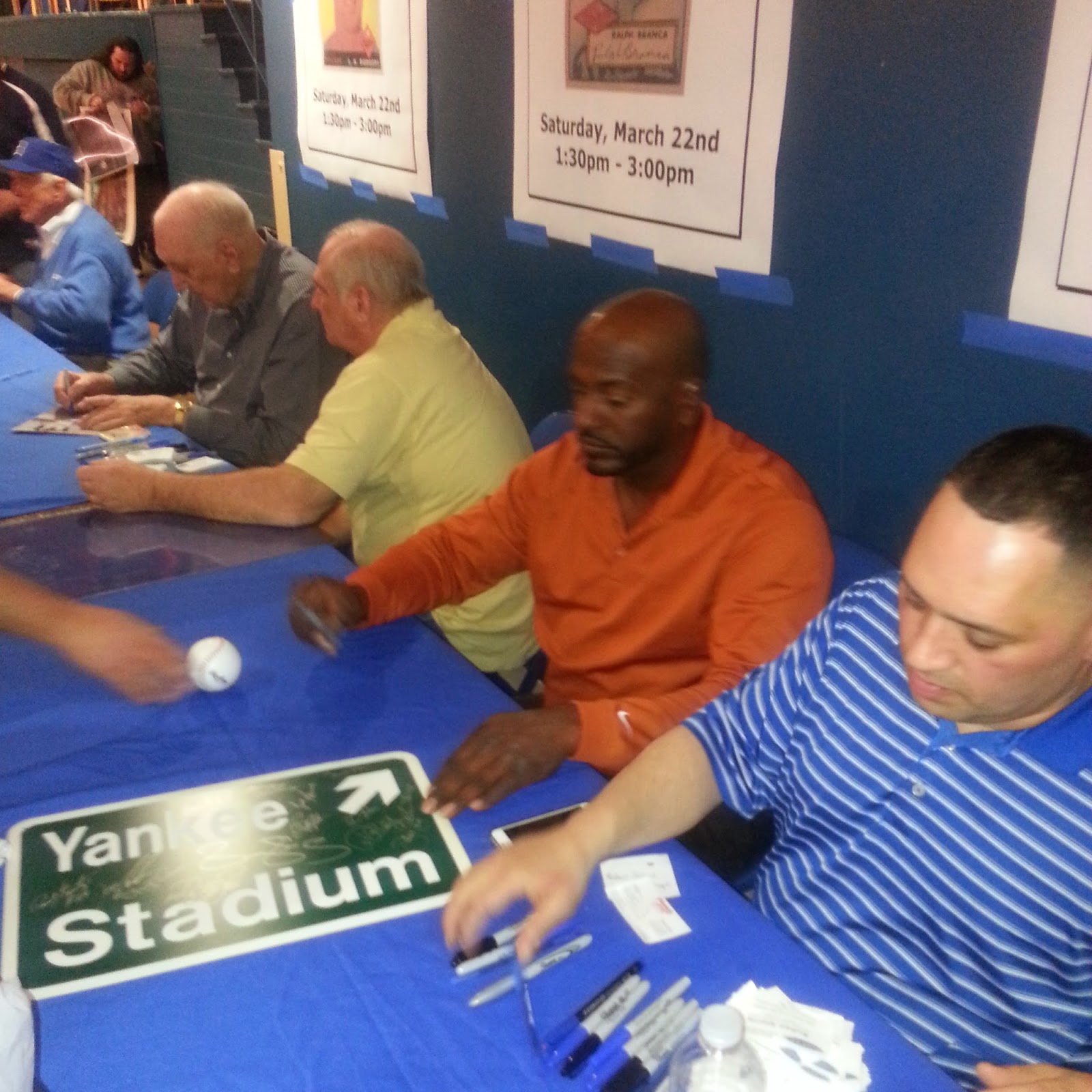 Sierra was signing autographs from 1-3 pm, but I got caught up at looking at the dealer tables that I was late getting in the line. By the time I had got on,  the signing had started. As of late, the line for the free signings have been incredibly long and today was no different. When I got to the back of the line, it had snaked down to where it was close to where Sierra was signing! I could have turned around and handed my stuff to Sierra to sign.

So for the next hour and a half, I passed the time by talking to my sweetie and playing Solitaire on my phone. My buddy went up to meet Rivera while I was waiting. By the time he was done, I was still waiting. Ridiculous. Next time, I will be in line before the signing even starts.  Slowly, but surely the line started moving and I finally made it to the front of the line to meet Ruben.

As I passed off my items I said hello to Mr. Sierra. Sierra didn't even acknowledge me, instead he chose to continue his conversation in Spanish with his buddy. I tried again to engage him in friendly banter as he signed my items to no avail. He didn't even look at me as he slid my stuff across the table to me. I didn't even say thank you, choosing to just grab my stuff and leave. Look, I know I'm not anything special, but have some manners and at least say hi when someone comes up to you at a signing that you were paid to be at. It wasn't just me he ignored either. I saw other fans and a child or two get he cold treatment from him as he signed without acknowledgement to the fans.

At least I got 2 nice autographs for my Yankees PC 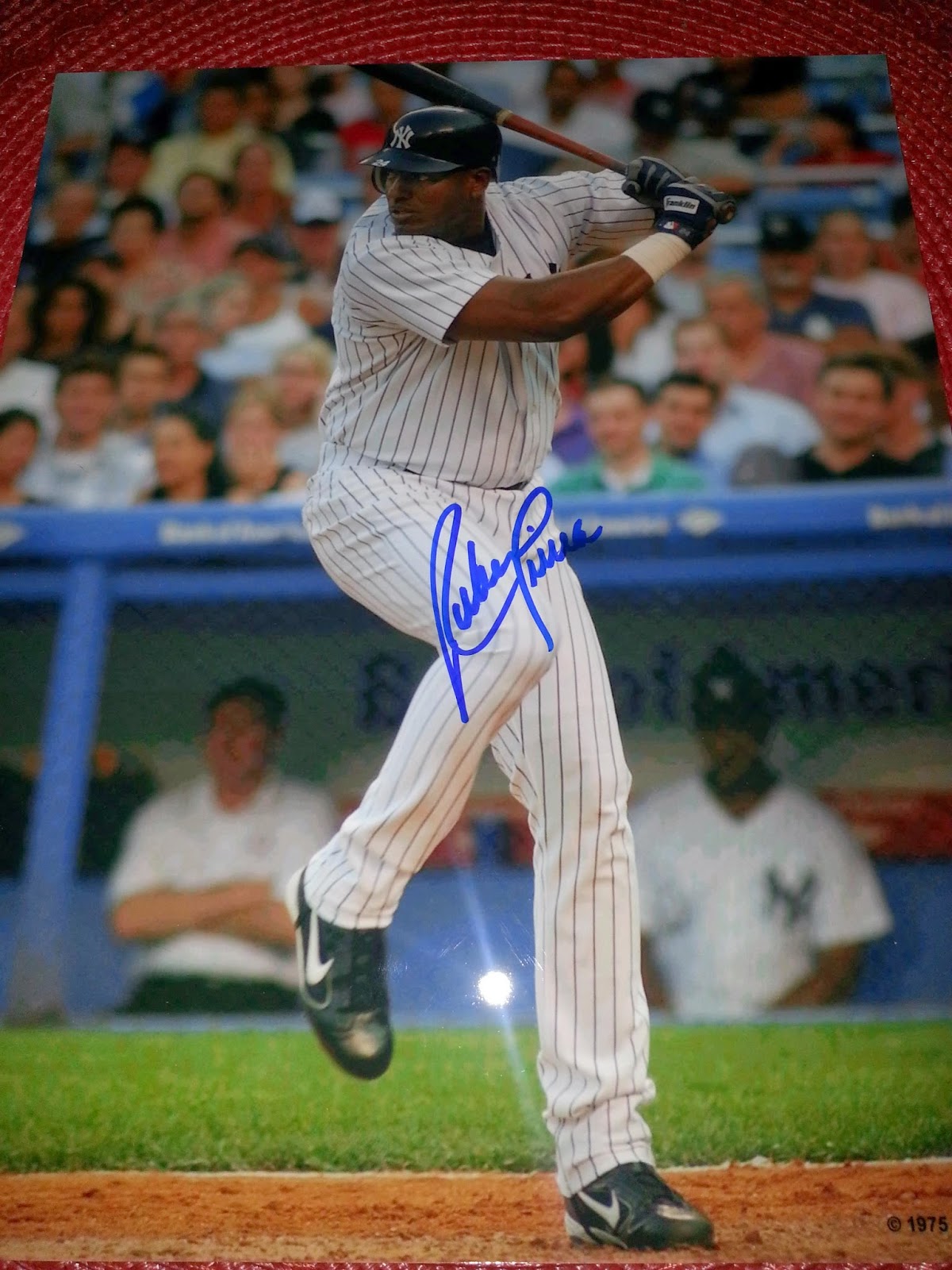 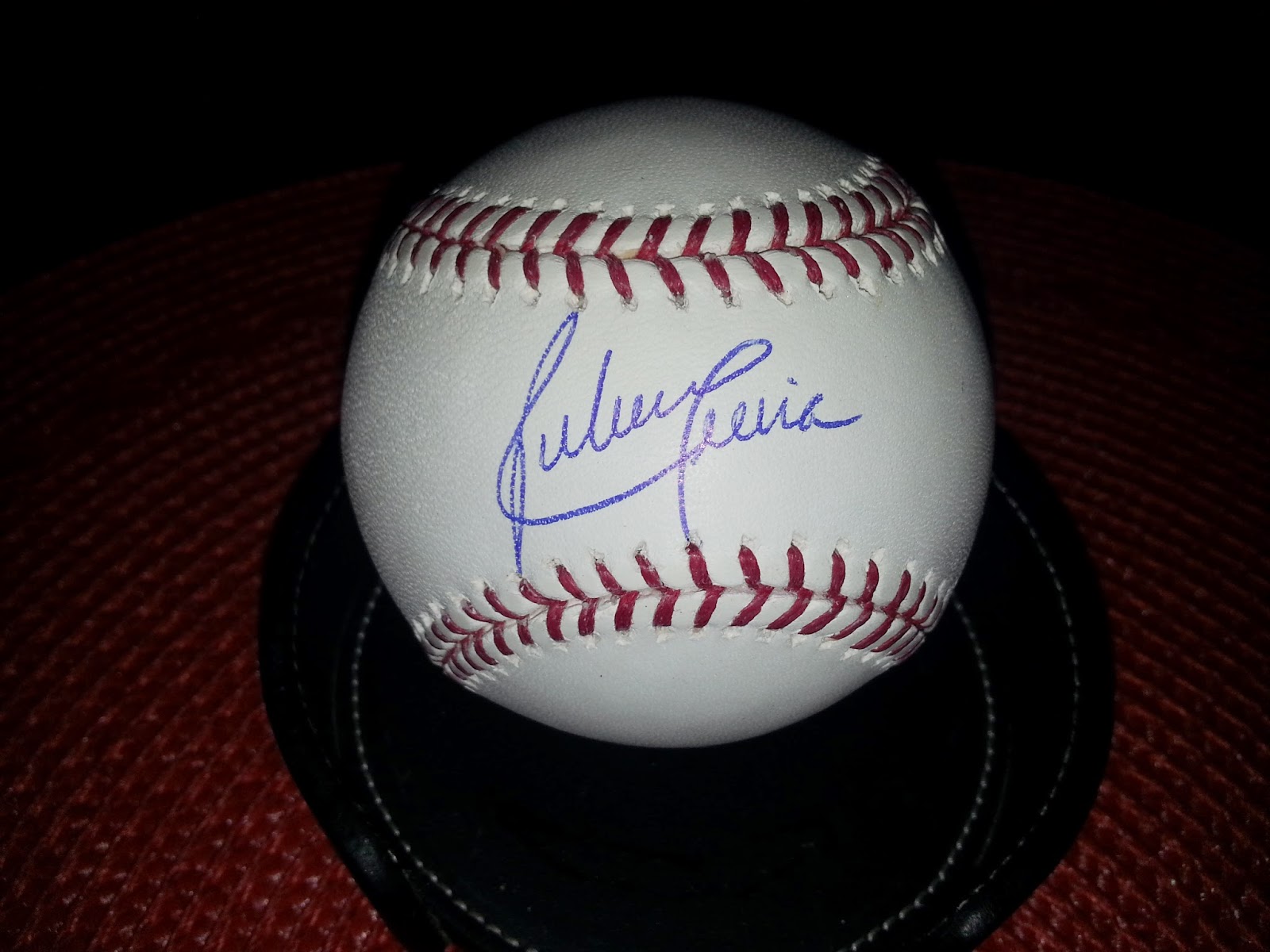 I wasn't going to let that jerk ruin my day at the show, so I circled the floor a couple times, looking at dealer tables. 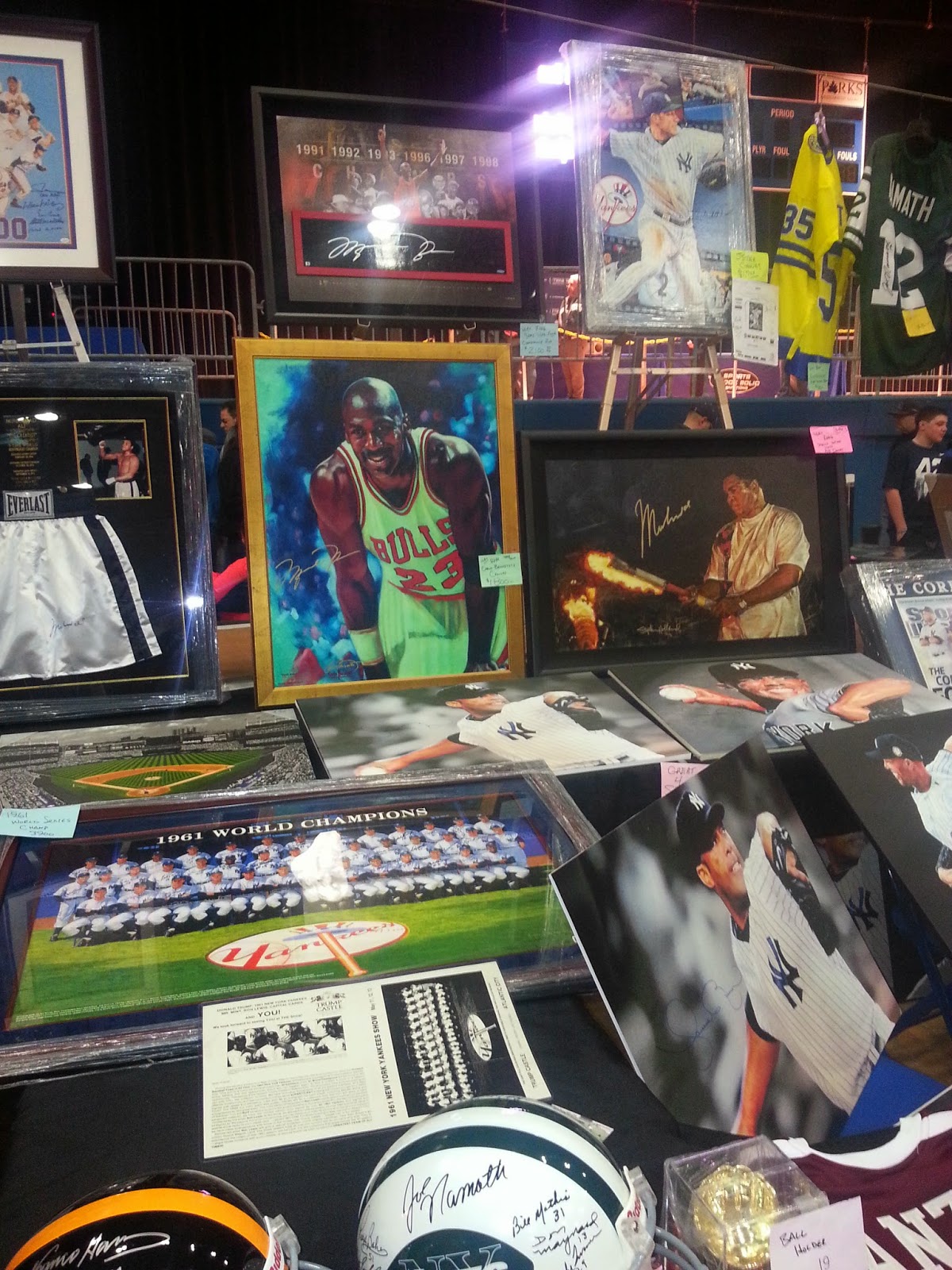 For various reasons, I didn't bring a whole lot of money with me to the show, so I had to be very picky about what I picked up today. I decided to keep it cheap and stick with looking at cards that were under a dollar. I wanted to look for cards to add to my Tino Martinez and Mark Teixeira collections. After looking through a couple of boxes, all I found was 2 cards. 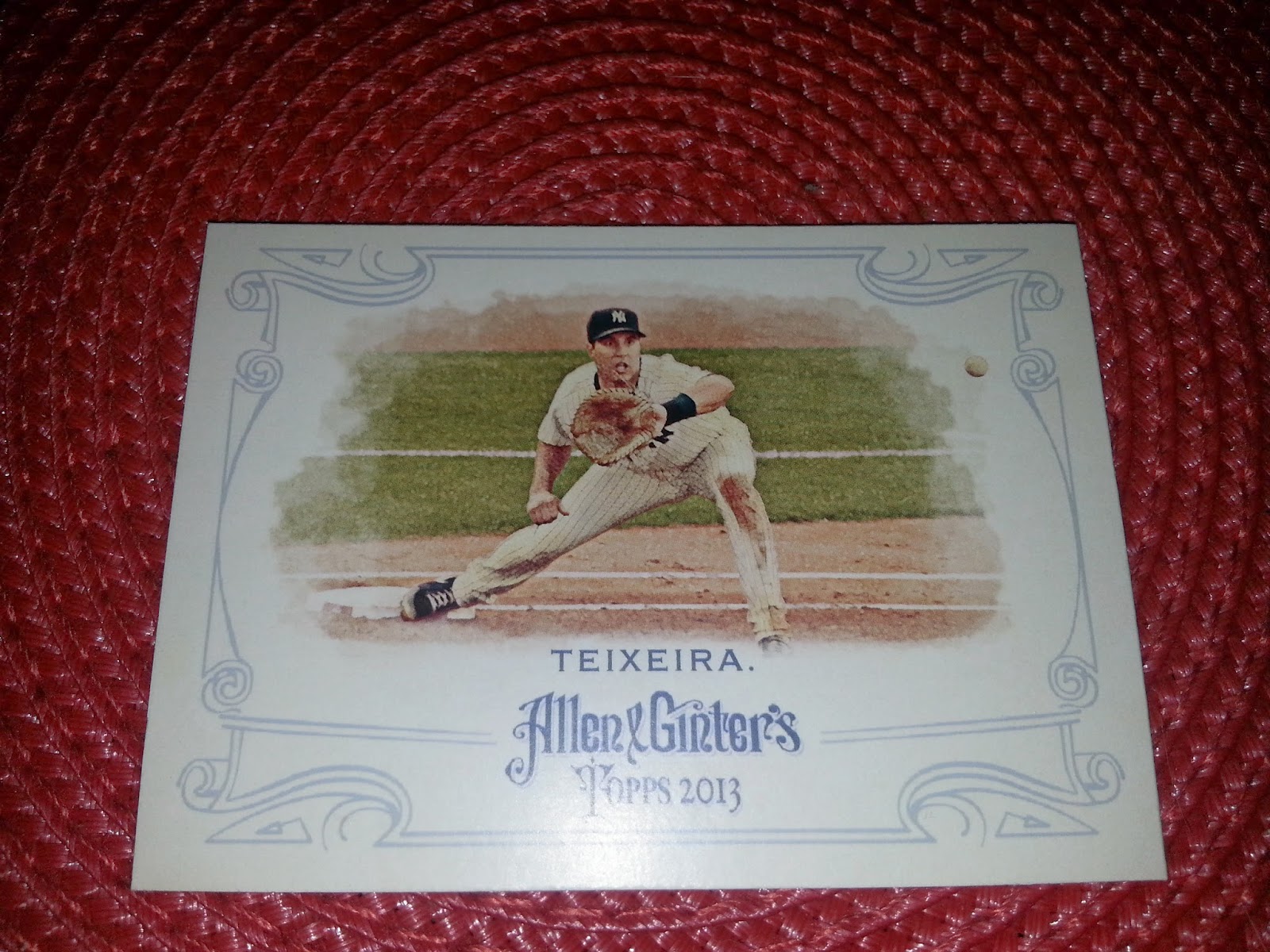 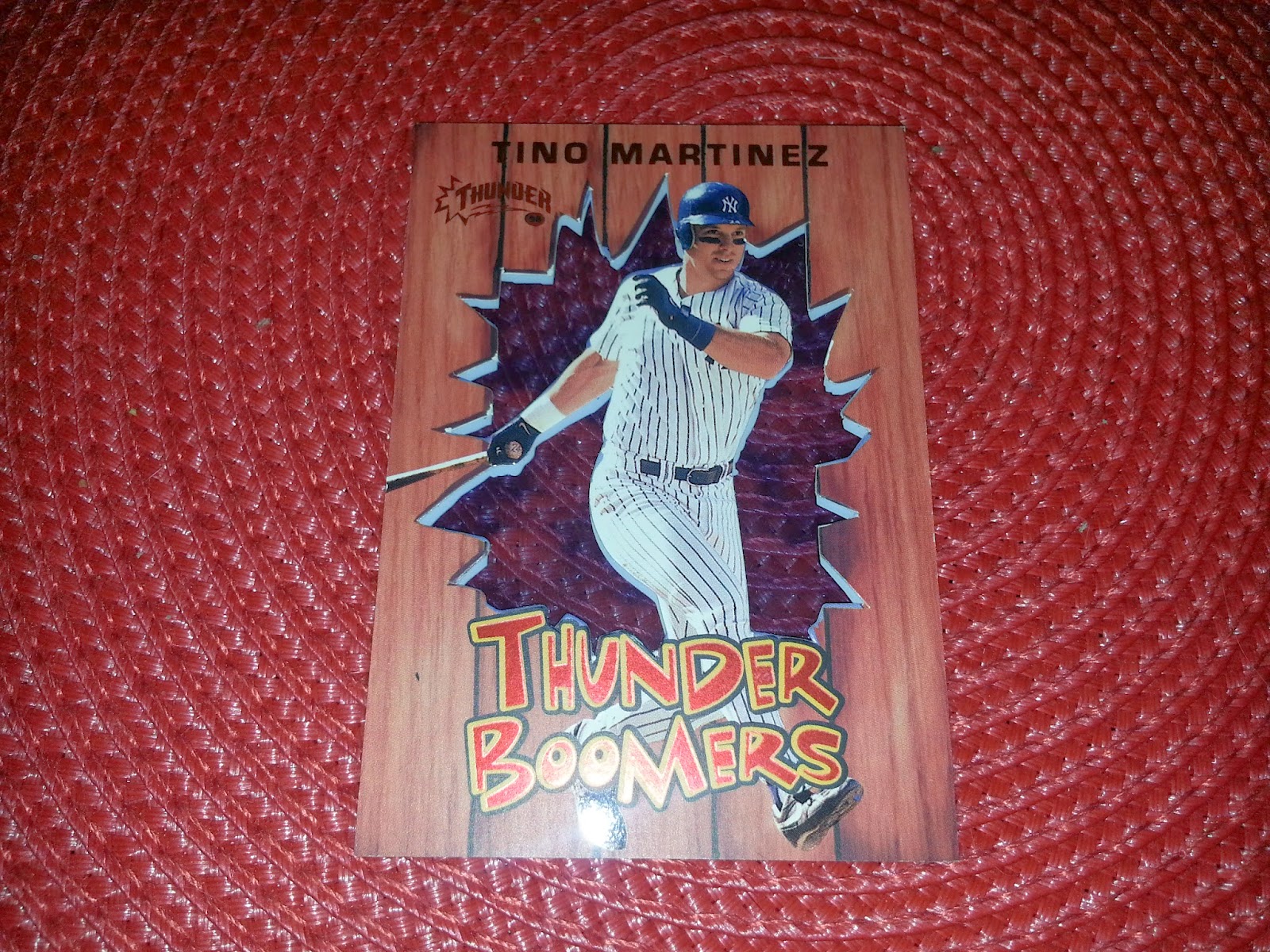 Not exactly what I had in mind when I decided to stick with these two players. Disappointing to say the least. Guess I will just stick with COMC to add to my player PC's. But all was not lost. I was able to add 2 pieces to my Jets collection. 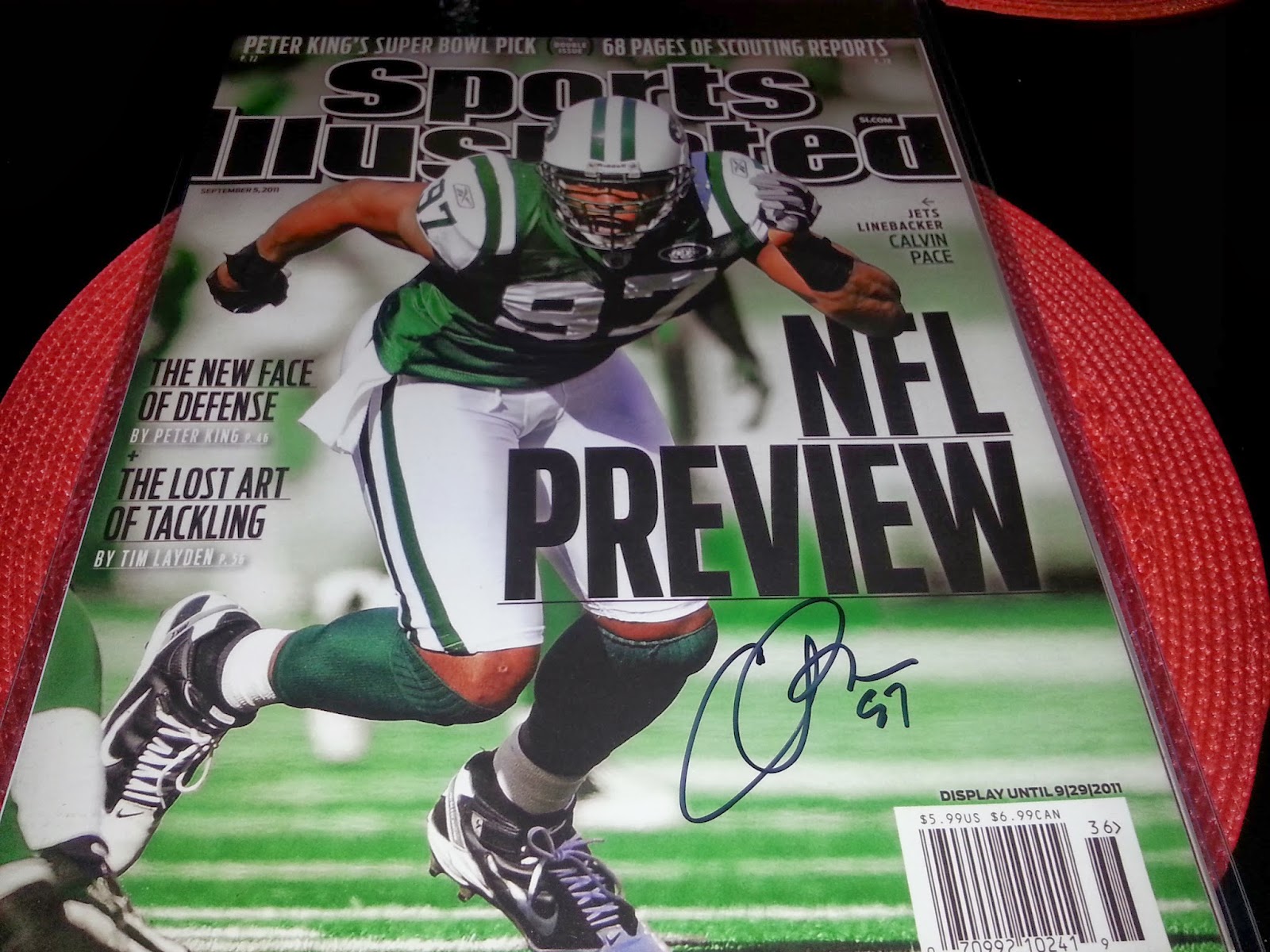 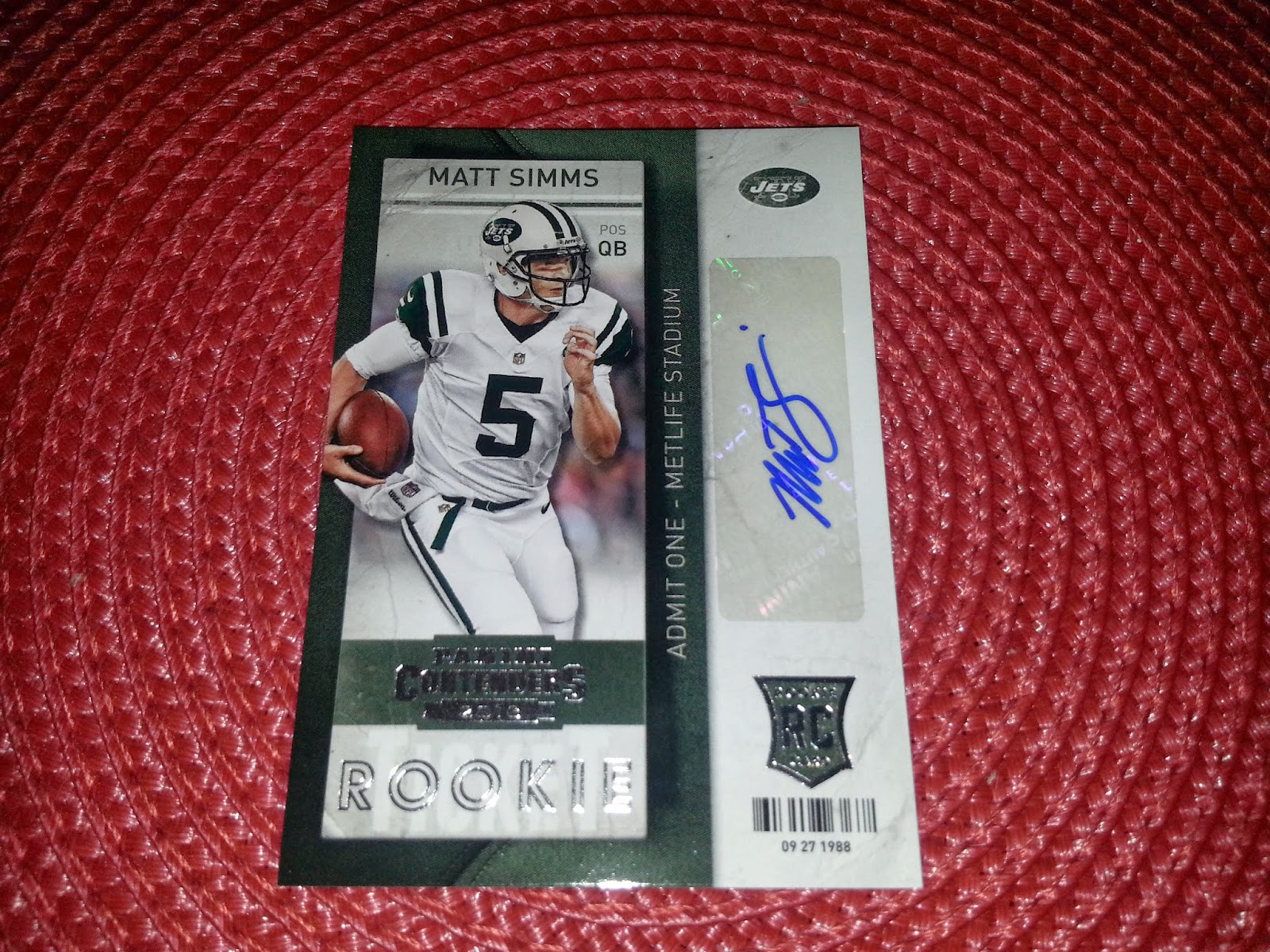 Picked up a 16 x 20 Calvin Pace signed SI cover, blown up. The dealer had a ton of Jets stuff and would have thrown in the Calvin Pace for free if I had bought a Darelle Revis signed mini helmet for 50.00. Unfortunately, I didn't have that much, so I just took the Pace auto for 10.00.

The Matt Simms card cost me 3.00 at a table where a dealer was trying to get my friend to pay up to 400.00 for a Panini Matt Harvey autograph/Patch card. My buddy is not a card collector, but even he knew that guy was overpricing his cards. The patches were pretty sweet, but I think if he really wanted them he could get them cheaper on eBay. The dealer wanted 5.00 for the Simms, but I talked him down to 3.00. He also had some Stephen Hill Patch/Autograph cards, but wanted 40.00 for them. He said he still believes in Hill. Well, at least someone still does.

I also got a free Mariano Rivera card at the door with paid admission. 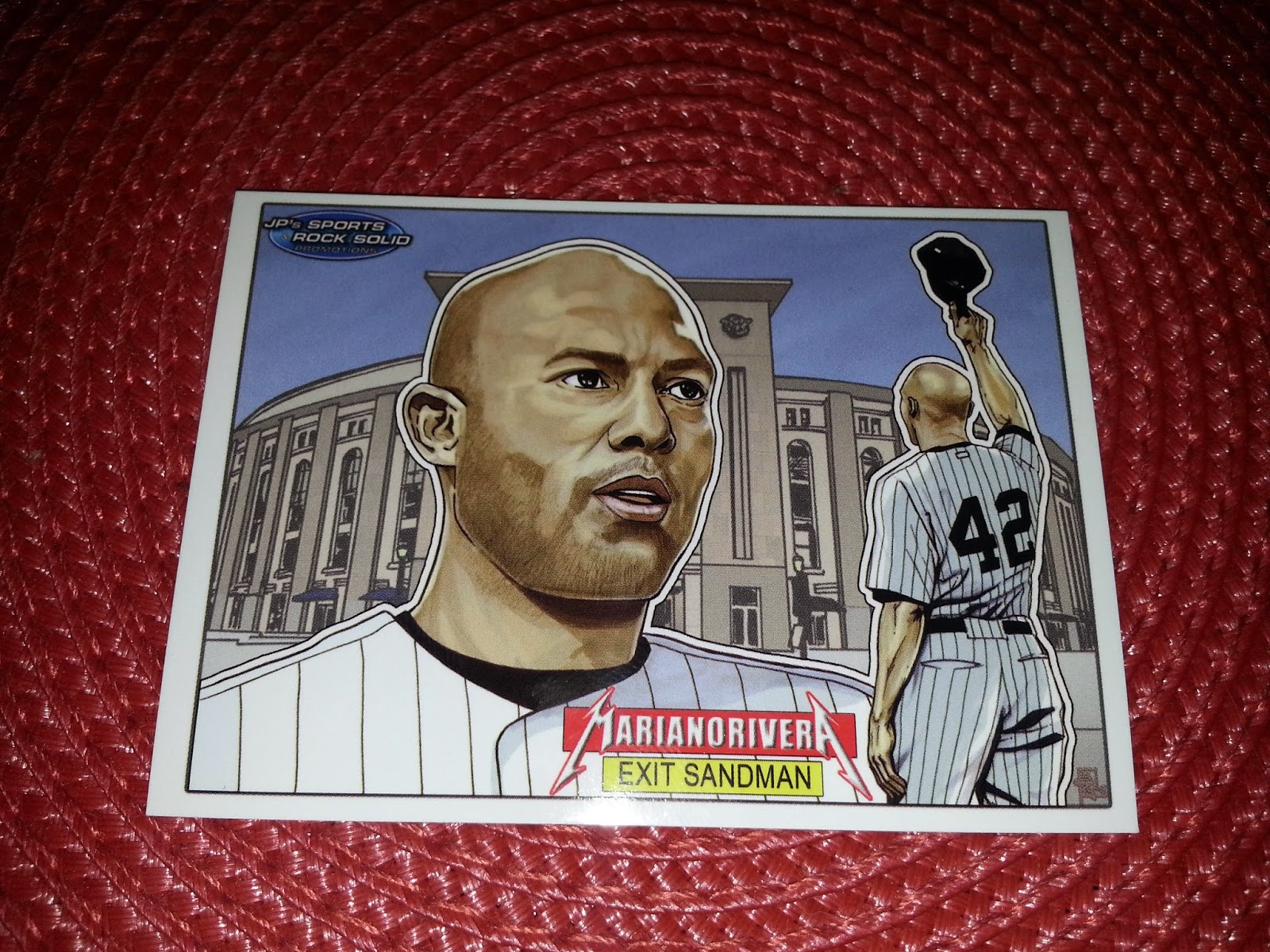 The drawing on the card was done by Brian Kong. I have long been a fan of his work on various Topps cards as well as some Marvel comics. He had a table set up, but wasn't there when I went to his table. I looked at some sketch art he was selling. If I had the cash, I would have picked up a piece. I'm a huge fan of original sketch art and saw a sweet Don Mattingly he was selling. Had I known he was going to be there, I might have bought along an artist card and asked him to sketch something and sign it. I'll keep an eye out for his next appearance. The Rivera card is a pretty cool and unique addition to my Yankees PC.

All and all, despite my funds being on the low side, I managed to have a bit of fun and add a few pieces to my various collections. It just goes to show you that if you plan out your day properly, then anyone can have a good time, regardless of what you have in your pocket.
Posted by Unknown at 8:45 PM