A few weeks ago, I was in my closet, looking for a couple of things when I came across a box of some old baseball stuff I had as a kid. Among the goodies, I found some old Yankees mugs that were given away during Fan Appreciation Day back in the 1980's (I'll show those off in a future blog post) and a couple of old baseball cards. In the very bottom of the box, I found this envelope 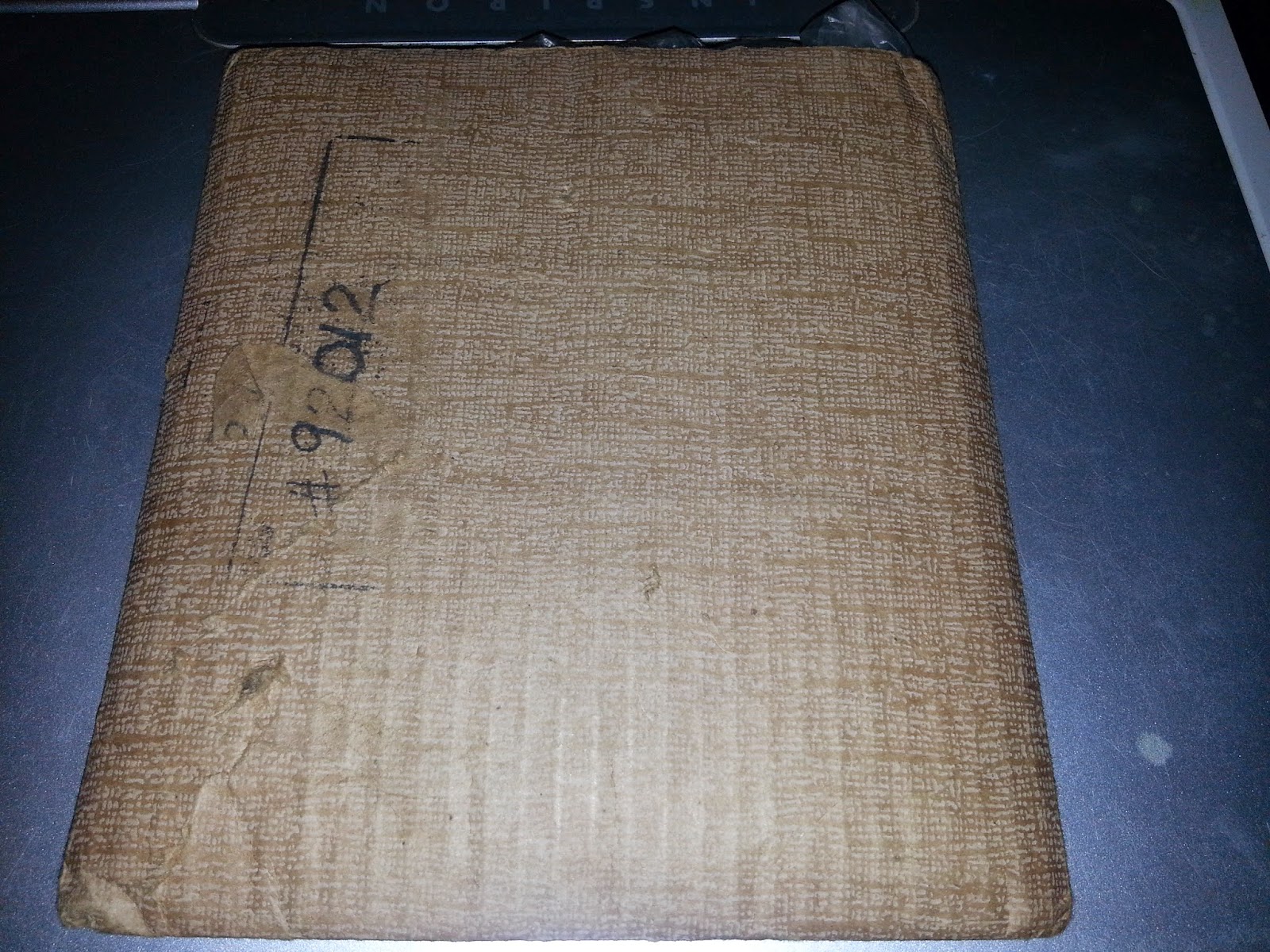 The envelope looked vaguely familiar to me, yet I couldn't place what was inside. Once I pulled out the plastic bag I remembered instantly what they were and how I came about owning these. 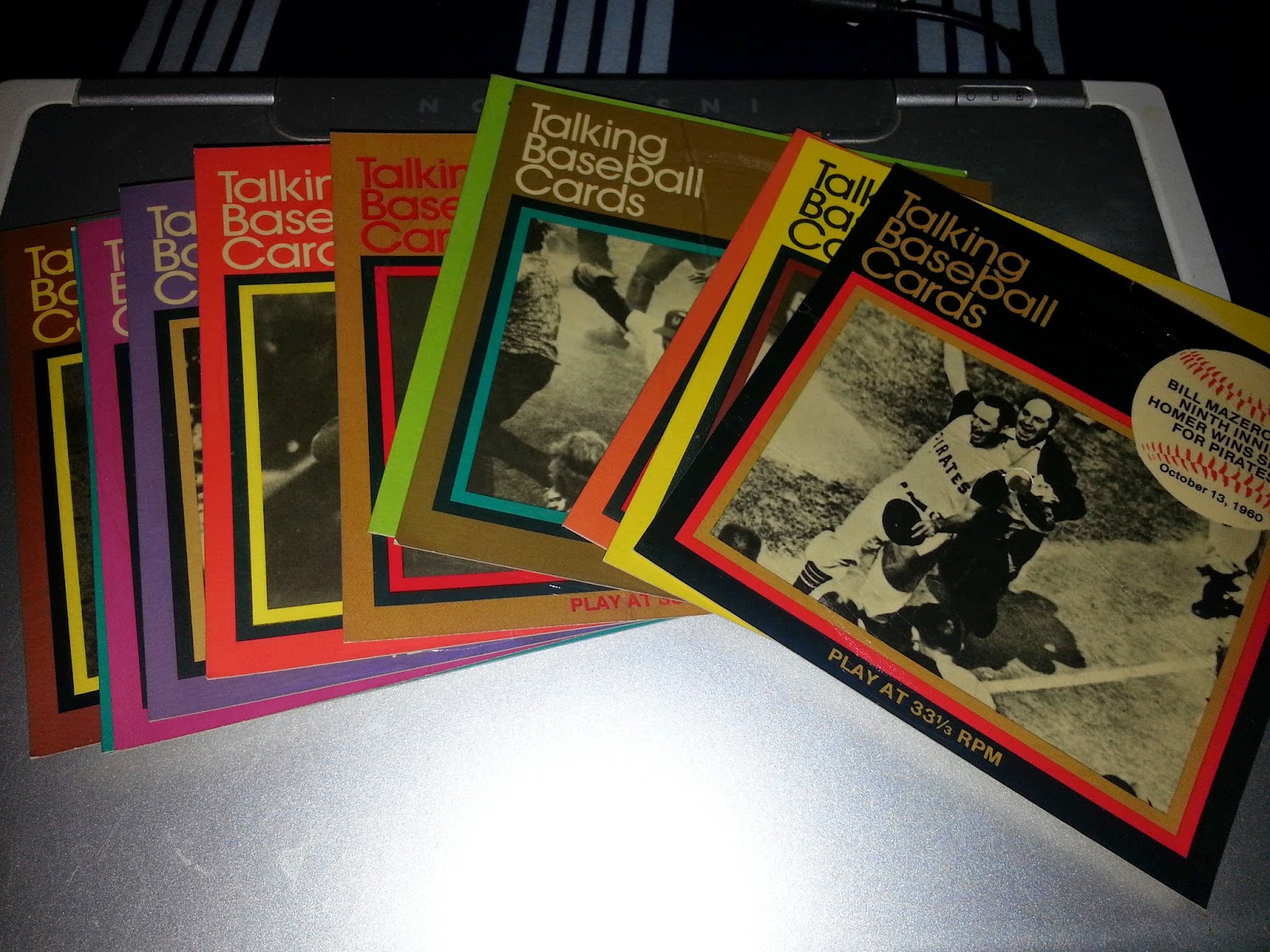 These were the Talking Baseball Cards that were put out by Collectors Marketing Corp. They were actually records you played at 33 1/3 that had the calls of some of the greatest moments in baseball history. My mom had gotten these from the Sears Christmas Catalog for me as a Christmas gift in the 80's. I remember when I initially got these I was less than thrilled, but over time I was very thankful I had them because I could listen to the radio calls and learn all about some of the great achievements from some of the biggest names in baseball.

Now, when I was trying to find out the year these came out, 1989 was a year that popped up a lot and I can surely tell you that I did not get these in 1989 as I was a senior in high school and I was listening to CD's of groups like The Beatles, Depeche Mode, The Cure, KISS, Guns N Roses and other bands. I doubt I even owned a record player back then. I'm almost certain I got these in 1982 or 1983.

Among the records I got were: 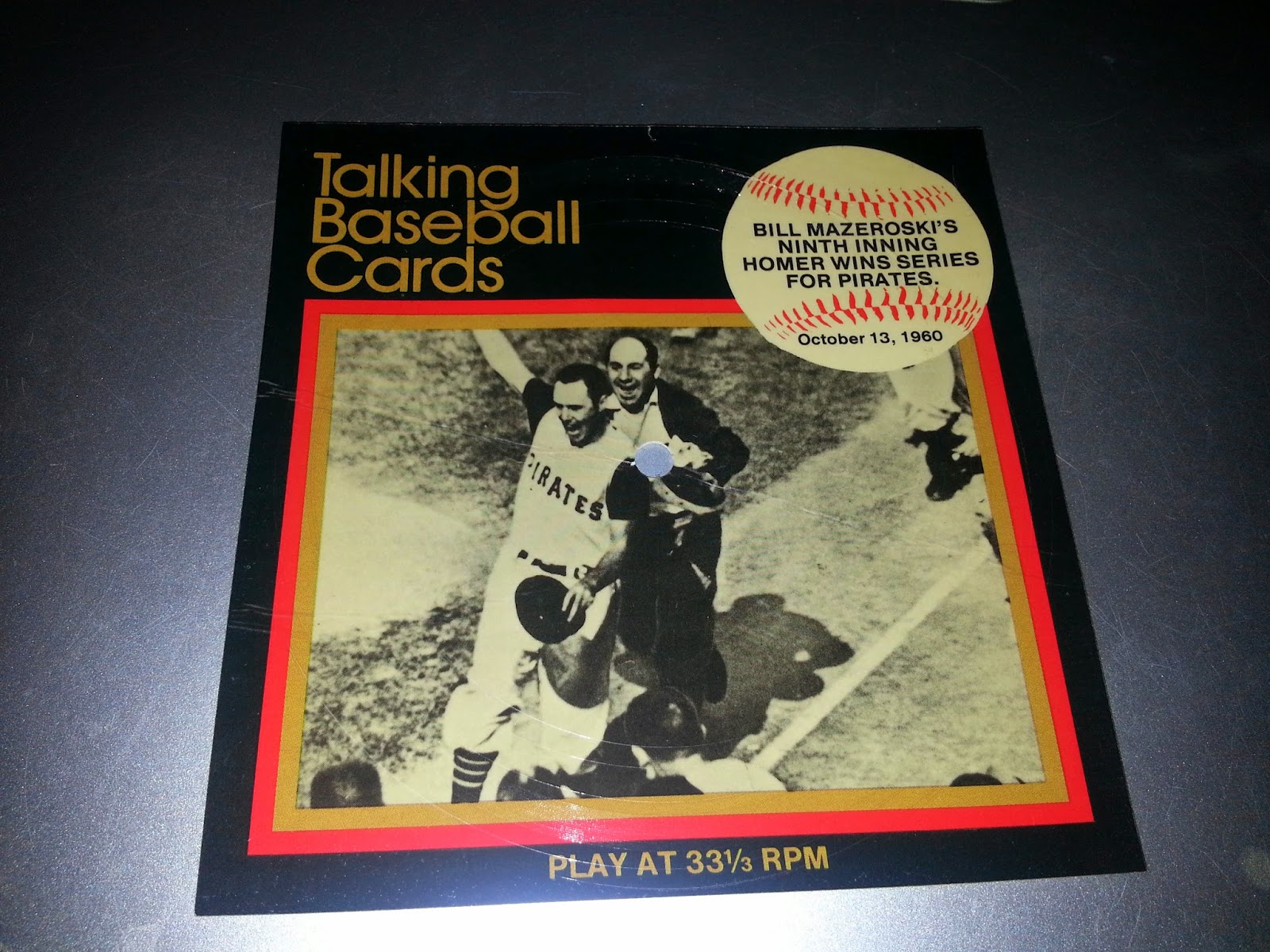 Even though this happened 11 years before I was born, I barely listened to this recording of Bill Mazeroski walking off the Yankees in Game 7 of the 1960 World Series. Although Roberto Clemente was on that team, I still dislike knowing the Yankees outscored the Pirates in that series and still lost. It cost Casey Stengel his managers job because it was thought that had Whitey Ford pitched in Game 1 he would have pitched game 7 and the Yankees would have won the series. Oh well, I chalk it up as the Pirates revenge for the 1927 World Series when the Murders Row destroyed Pittsburgh. Still, this was a nice moment in baseball history. 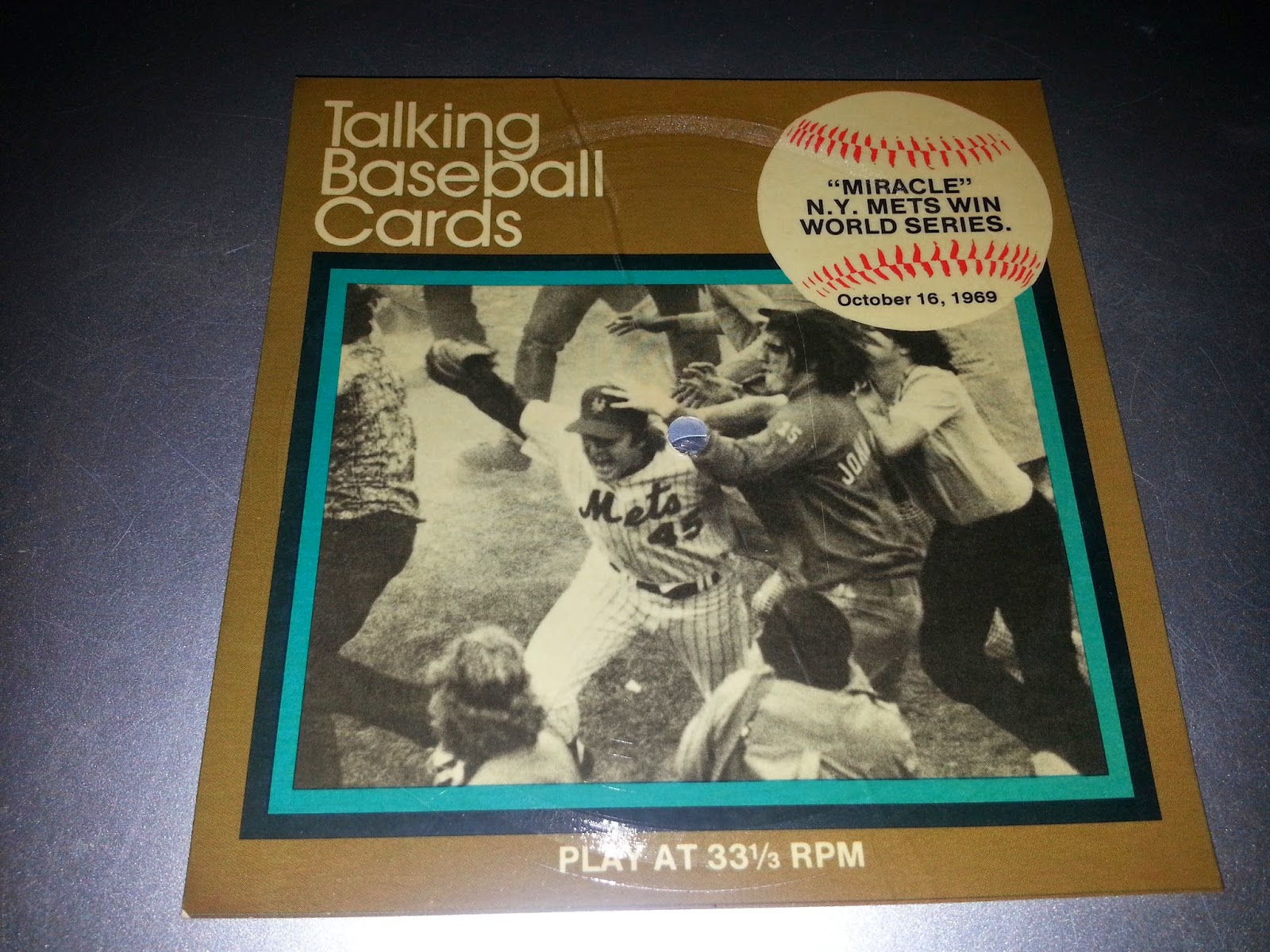 Another nice moment in baseball history was the New York Mets having their moment in the sun when they beat the Baltimore Orioles in 5 games to win the World Series in 1969. 1969 was a great year in New York sports. The year started off with the Jets upsetting the Baltimore Colts in Super Bowl 3 and the Knicks would win the NBA Championship later on. Now that I think about it, Baltimore had a lousy sports year in 1969. Also, I am pretty sure that picture is not from the 1969 World Series but from after the last out from the 1973 NLCS when Tug McGraw led the "You Gotta Believe" Mets into the World Series. 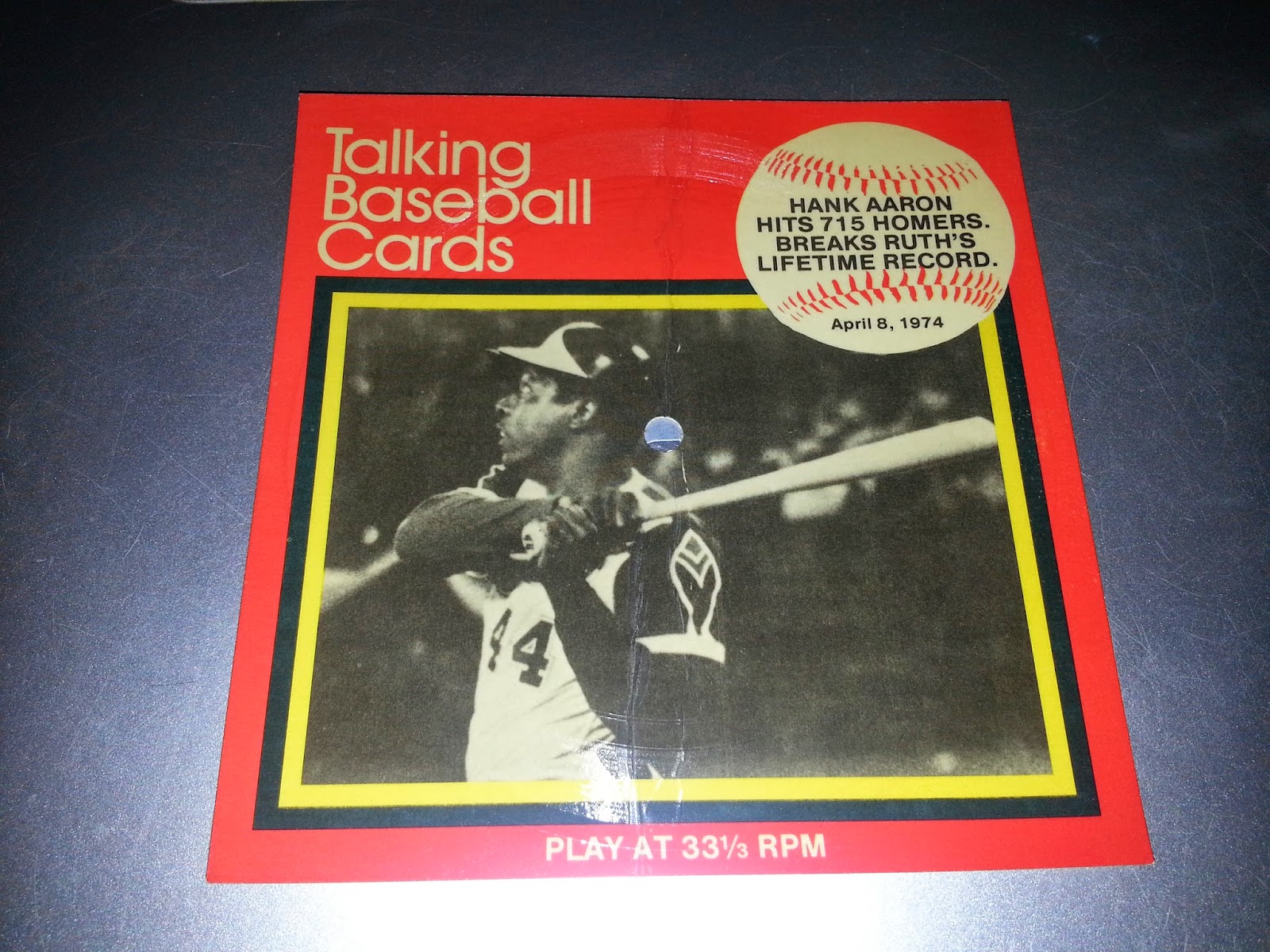 Here's a recording that I enjoyed listening to. I had always wished I was able to watch this happen live. Unfortunately, I didn't start watching baseball for another 2 years, so at the time, this was all I had to relieve that moment when Hank Aaron broke what was thought to be the unbreakable record and that was Babe Ruth's all time home run record of 714. I still have a great amount of pride when I watch video of the record breaking moment, but I just wish he didn't break the record in such an ugly uniform. 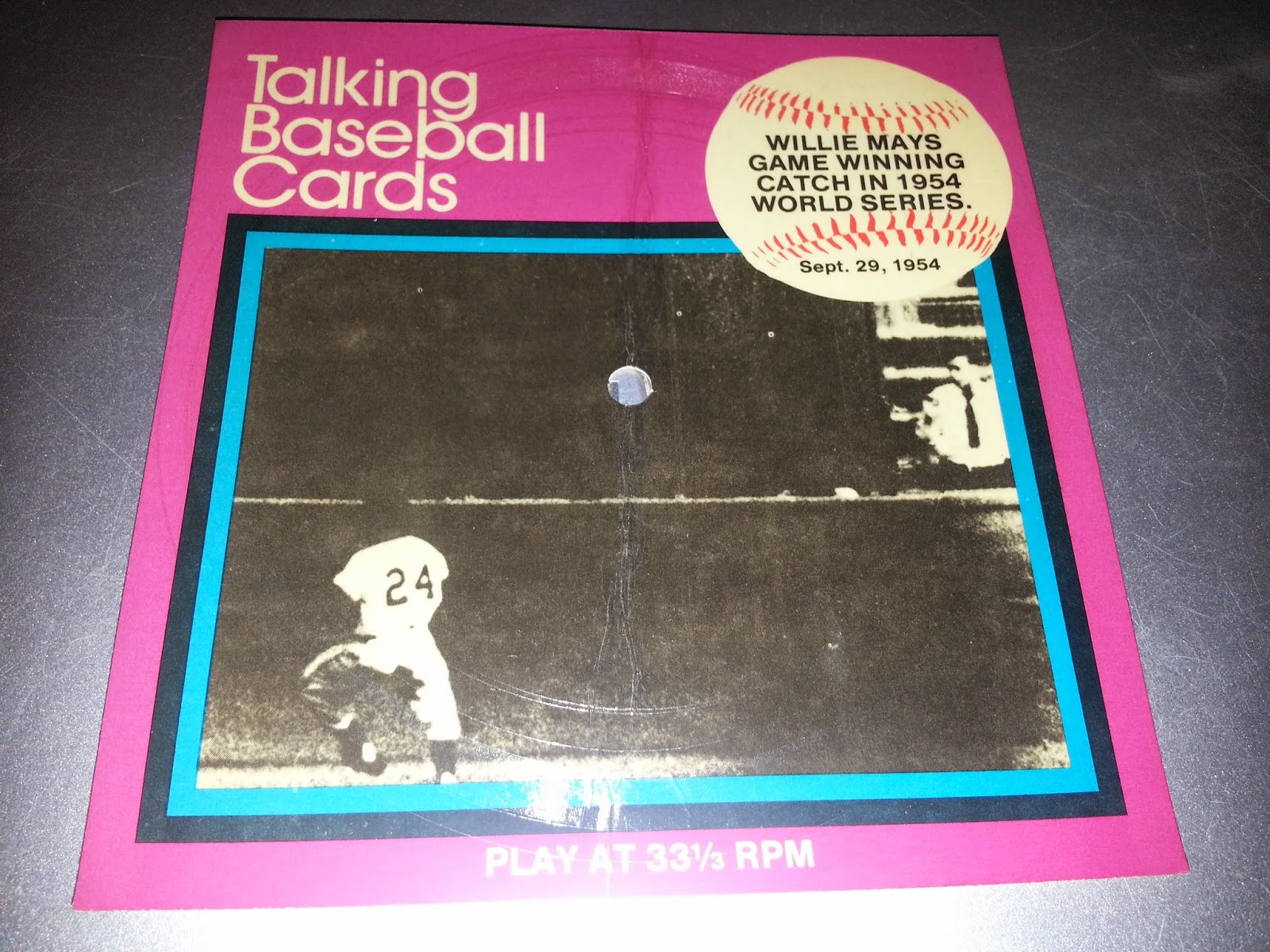 One of the greatest catches in baseball history was captured on vinyl so I could listen to it over and over. I am pretty sure I had seen film of Willie Mays's catch by the time I got this record set. I was a frequent viewer of "This Week In Baseball" and I am certain that they played clips of this catch and other great moments in baseball history. One of the coolest things about this record was I got to hear the term "optical allusion" over and over. 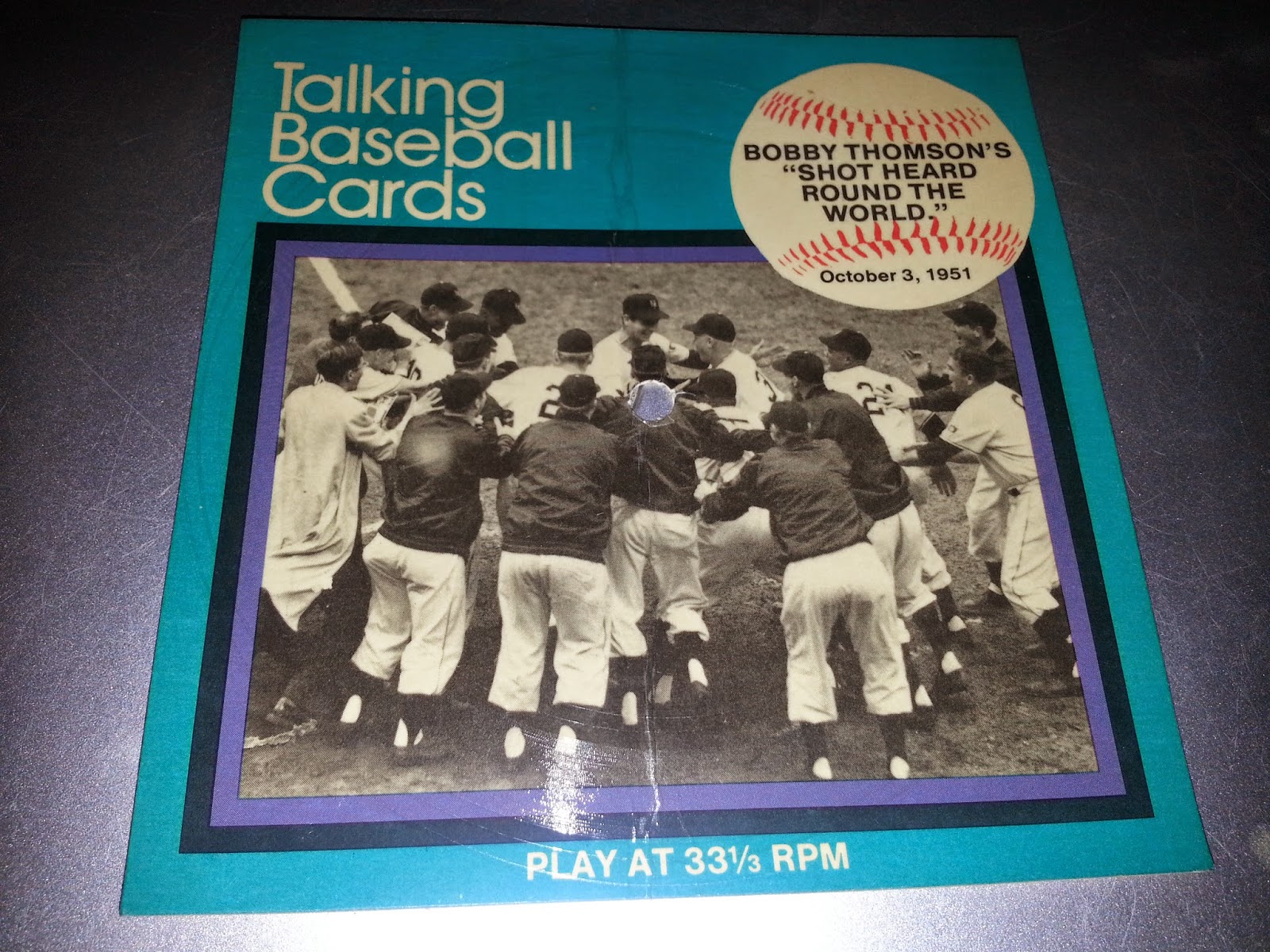 Here's a record that I'm sure my Dodger buddies won't be happy to see (Hey, if I had to listen to Maz's home run over and over, you can deal with this :P). One of the greatest walk off home runs in the history of the game was hit by Bobby Thompson in the deciding game of a 3 game playoff between the Brooklyn Dodgers and New York Giants. We all know the story by now. Ralph Branca came in to pitch to Thompson and Thompson yanked the one out of the park to put the Giants in the 1951 World Series. Of course, there is the controversy that the Giants may have been stealing signs from the Dodgers through a telescope that was positioned in the Giants clubhouse in center field and relayed those messages to the Giants dugout through a buzzer wire. Branca, always never wanted to take away from the significance of the moment, always said that even if Thompson knew what was coming, he still had to hit it. I always though that was classy of Branca and the moment is still a significant one in the annuls of baseball. 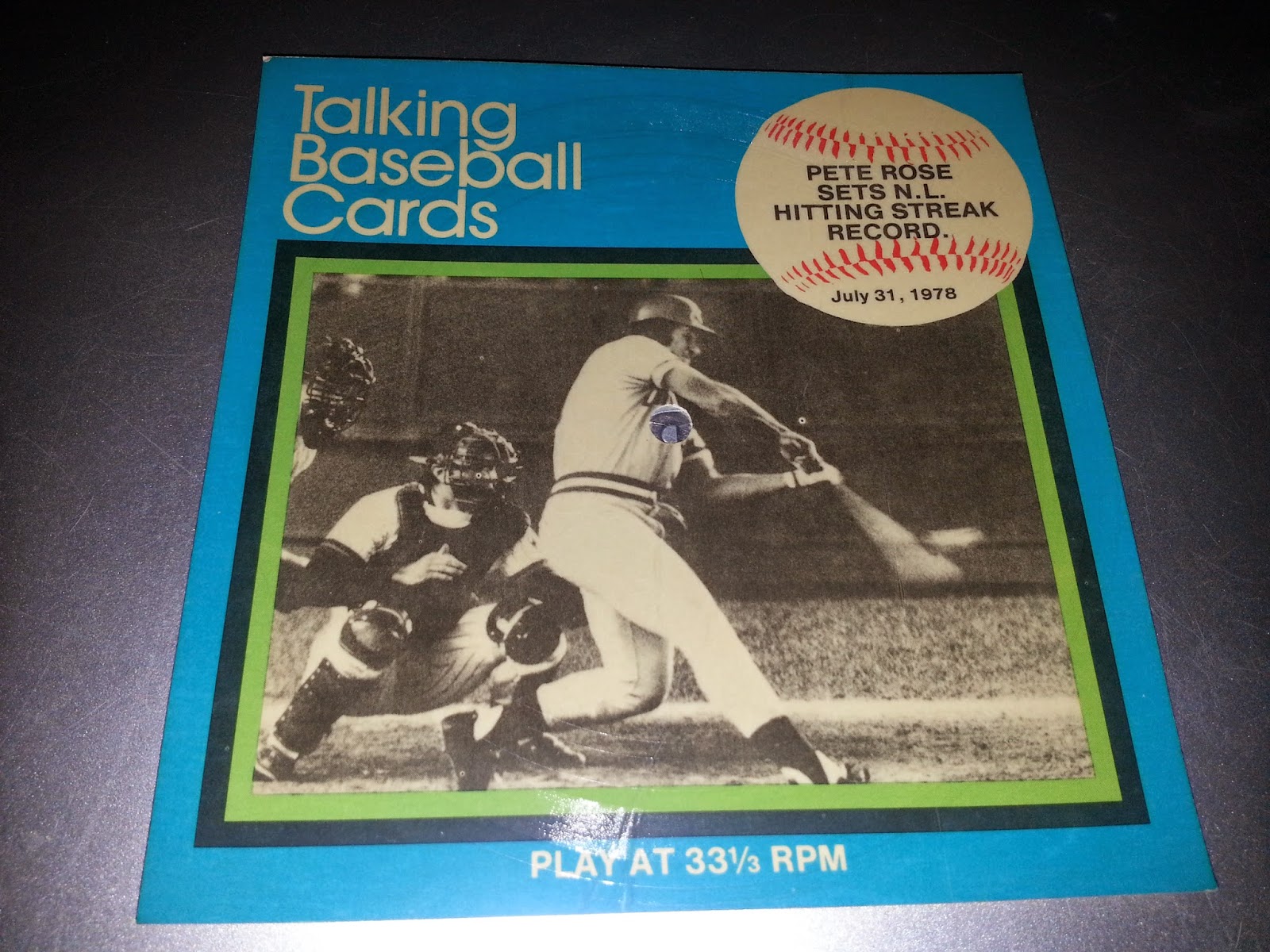 Pete Rose, friend to Mets fans everywhere...OK, maybe not after almost killing Bud Harrleson during the 1973 NLCS. On this recording, he sets the National League Hit Streak Record against the Mets at Shea Stadium by hitting in his 44th game in a row off Pat Zachary in the 7th inning. I actually remember watching highlights of this game and seeing what a big deal it was, although I didn't realize it at the time, especially since Joe Dimaggio had the 56 game hitting streak. In my opinion, that record will never be broken. Btw, Pete Rose For The Hall Of Fame! 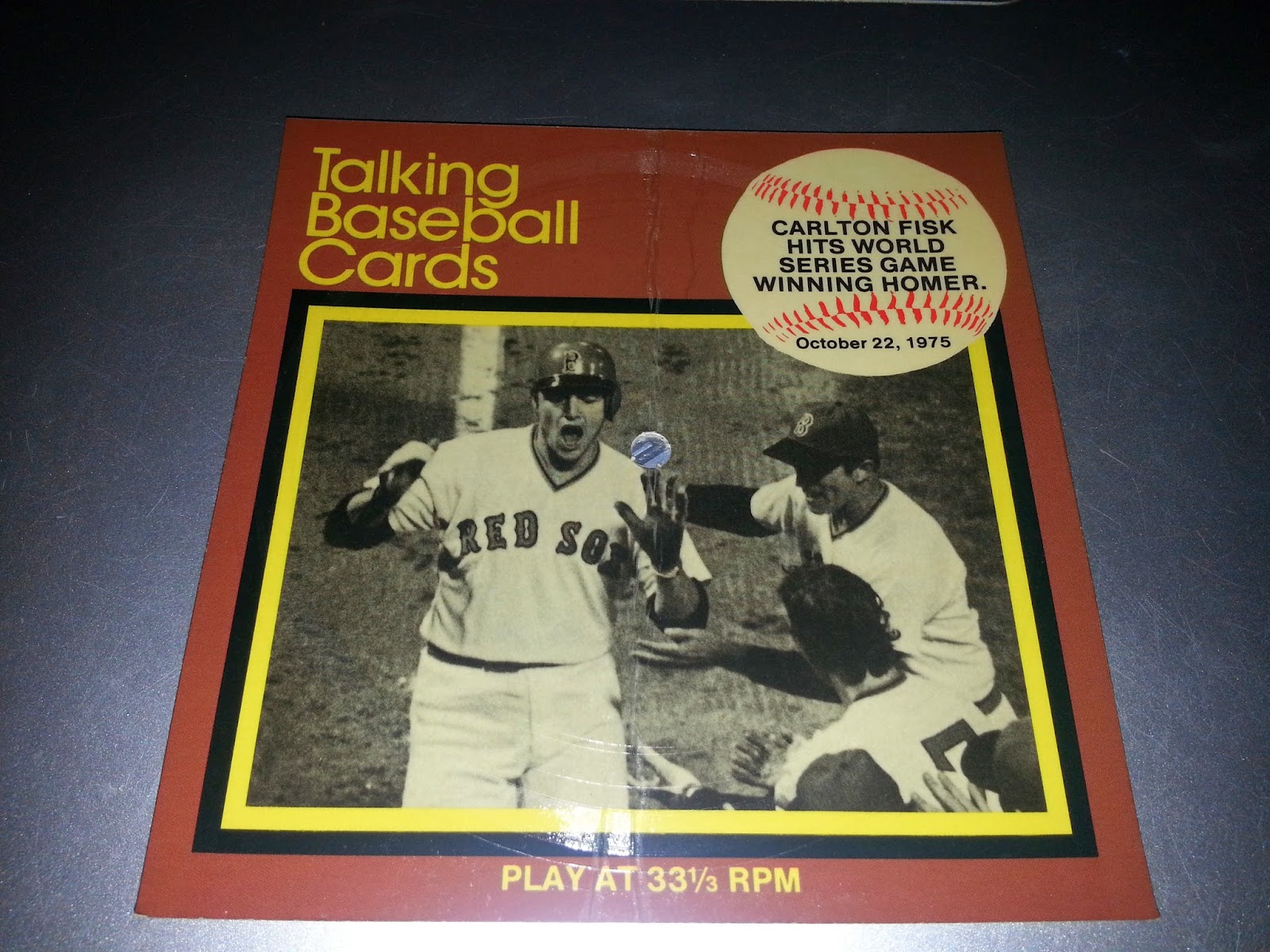 I just missed seeing this World Series live by one year. From what I heard, I missed a great Series. Although the Reds won the Series in 7 games, Carlton Fisk had his moment in Game 6 when he led off the 12th inning and hit one out. The visual of Fisk willing the ball fair on the first base line is a sight that will be replayed for forever.

Of course, I have my fair share of Yankees in this set: 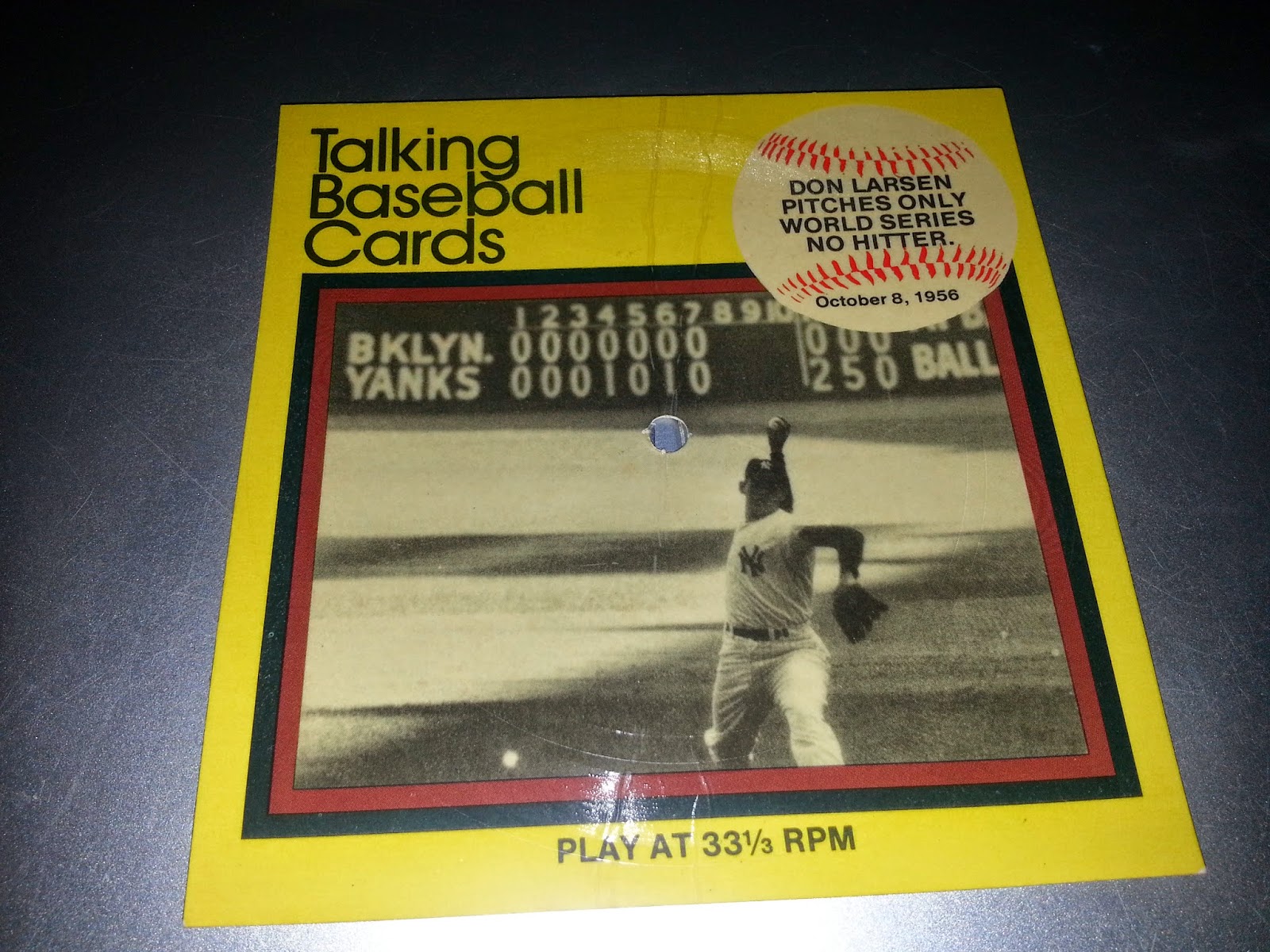 Don Larsen's Perfect Game in the 1956 World Series. The funny thing was he started game 2 and couldn't get out of the 2nd inning and he didn't think he would get another start in the Series. Well, I guess he made the most of this start. 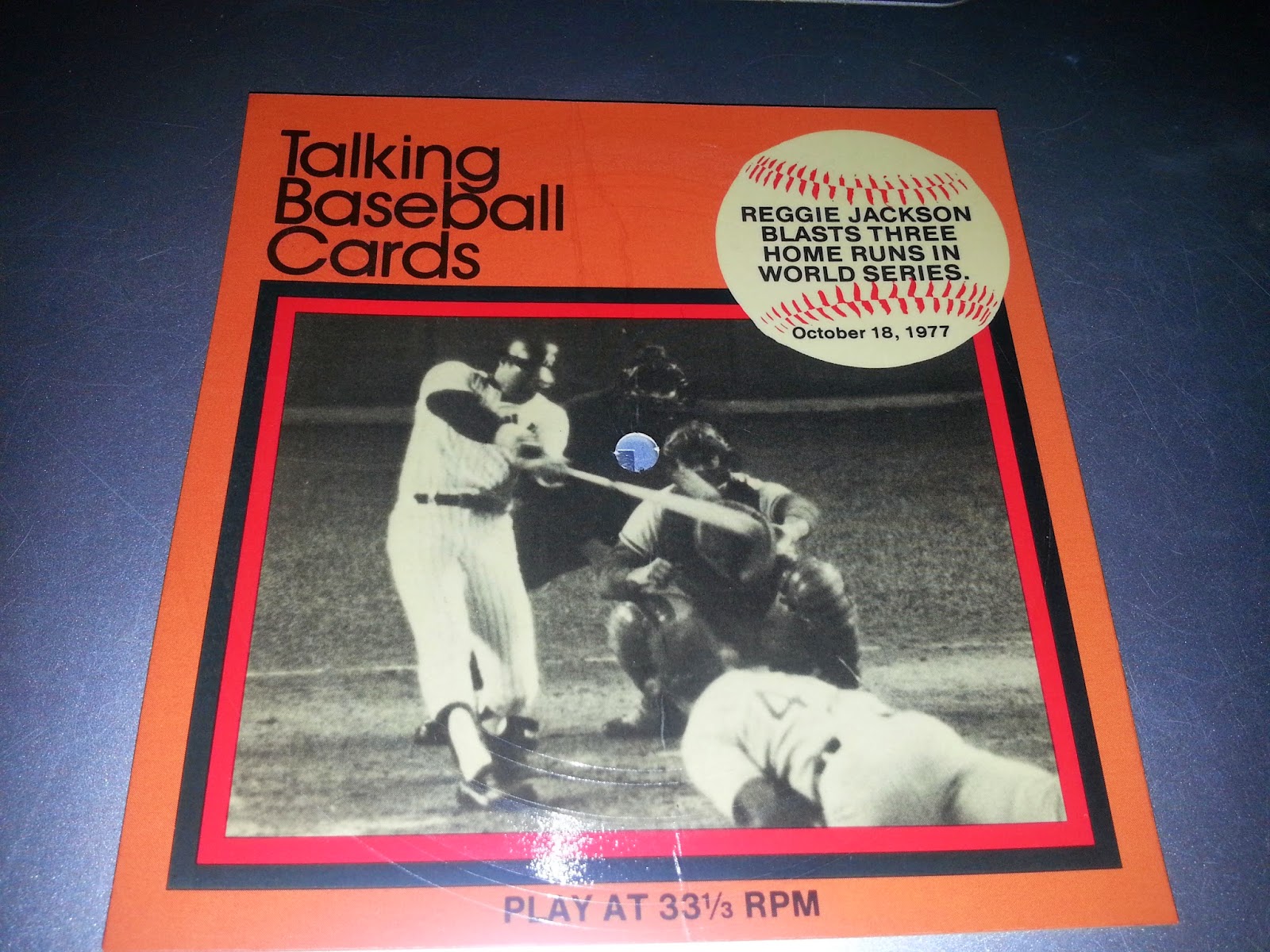 I remember watching this game with my mom. Reggie Jackson was my mom's favorite player and he made Game 6 of the 1977 World Series a memorable one for us both as we watch Reggie go yard in the 4th, 5th and 8th innings on just 3 swings. The old ballpark in the Bronx was rocking that night as Reggie helped bring the Yankees their first title since 1962. If my love for the Yankees was born the year before, this game cemented the Yankees in my heart for a lifetime. 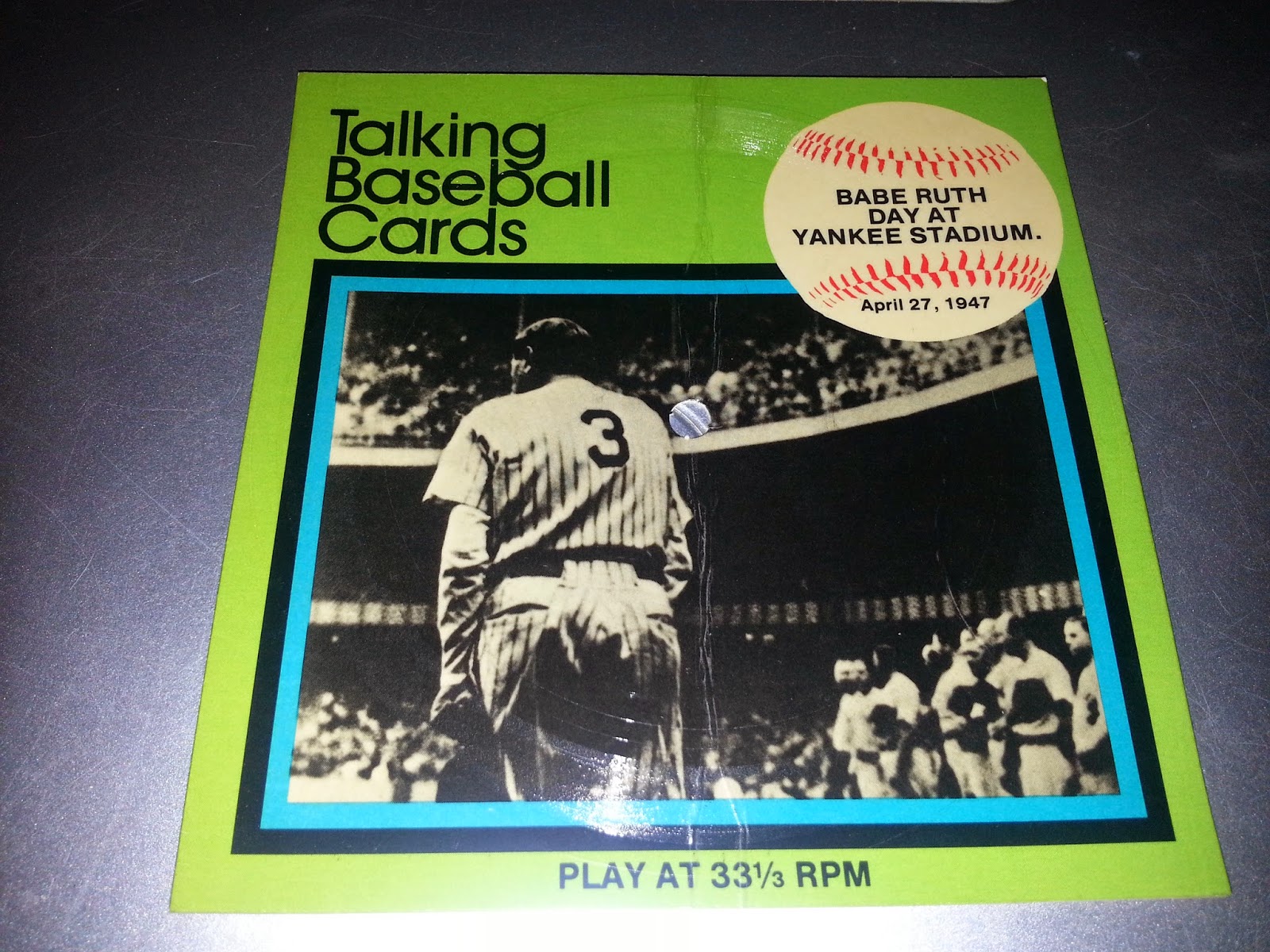 This one was a particularly sad recording as it's of Babe Ruth's final speech at Yankee Stadium with his throat ravaged with cancer. It was a rough and raw sounding Ruth and it's a sound that I have never forgotten and I'm so glad I still have this record. 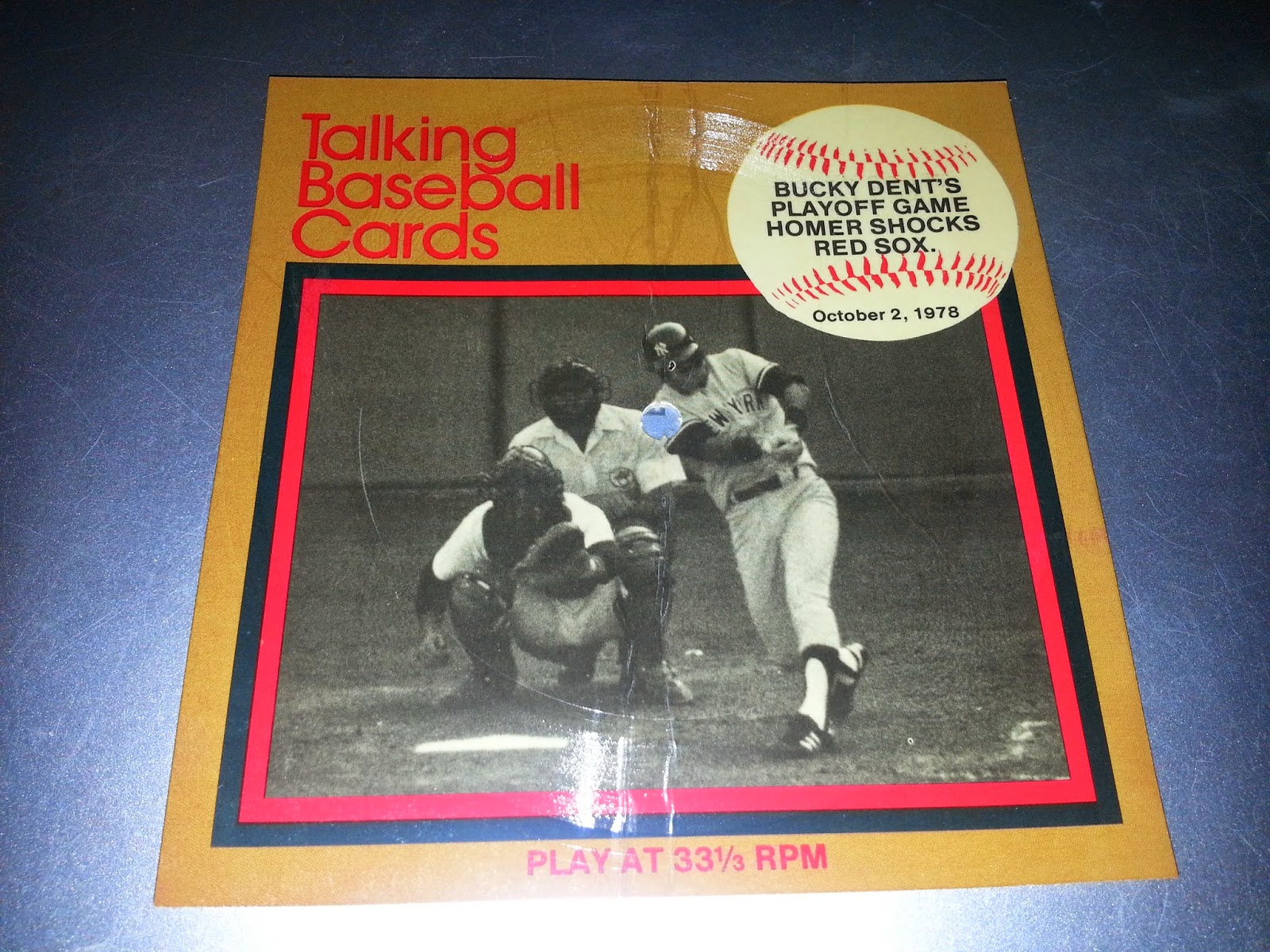 Another game I can say I watched. This recording is of the Bucky Dent home run off Mike Torrez in the 1 game playoff that the Yankees won and moved on to the ALCS to play the Kansas City Royals. Now a days, a game like this would have been shown on ESPN, TBS or Fox, but back then it was shown on a Yankees telecast on Channel 11. I actually remember Bill White's call of "Yastremski's not going get to it, it's a Home Run!" Three straight years I was treated to great Yankee moments and I haven't stopped enjoying them since. 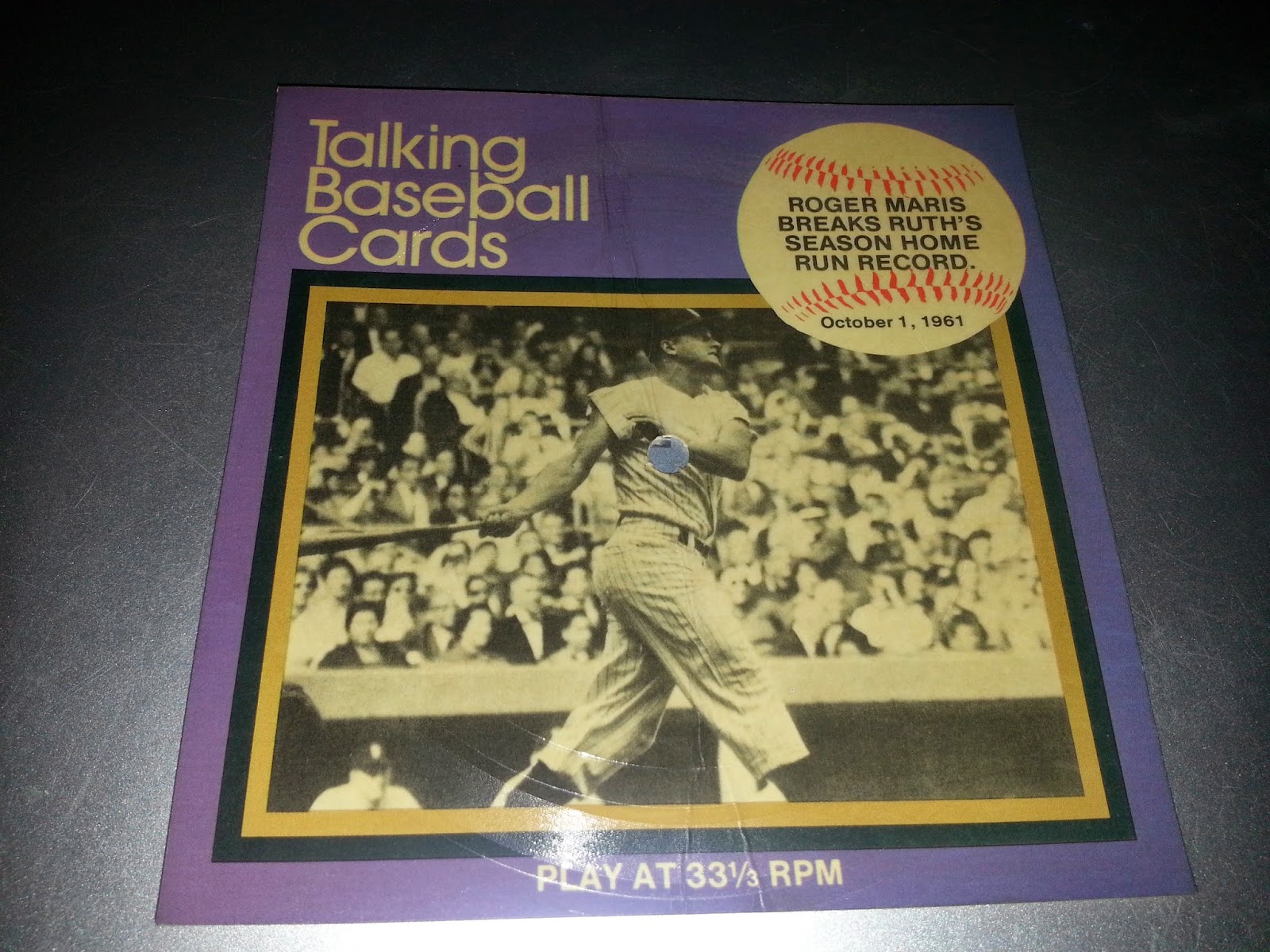 Finally, I have the recording of Roger Maris's record breaking 61st Home Run in 1961. After seeing Bily Crystal's wonderful film 61* and reading about the chase between Maris and Mantle for Babe Ruth's single season home run record, with the fans behind Mantle, The Commissioner of Baseball proclaiming any record had to be broken in the same time period that Ruth had since it was an expansion year, and the press hounding Maris, I'm sure it was gratifying for him to have been able to hit that home run. It's another of those moments in baseball history that I wish I could have seen.

I always wished we had gotten records of Jackie Robinson's first game in the majors, Roberto Clemente's 3000th hit,  Lou Gehrig's speech (I don't think a full version of it exists), Joe Dimaggio's 56th hit, Ted Williams final at bat at Fenway, Bob Gibson's 17 strikeout performance in the 1968 World Series. But I am happy that I had these records as a kid. I was able to learn baseball history in my spare time.

Now, these records have been listened to quite a bit, so they are in less than mint condition. I actually doubt I can play these even if I had a record player right now. But they are still very cool pieces to own and I'm really glad I still have these and if I can figure out a way to display them with my collection, I definitely will show them off proudly
Posted by Unknown at 2:44 PM