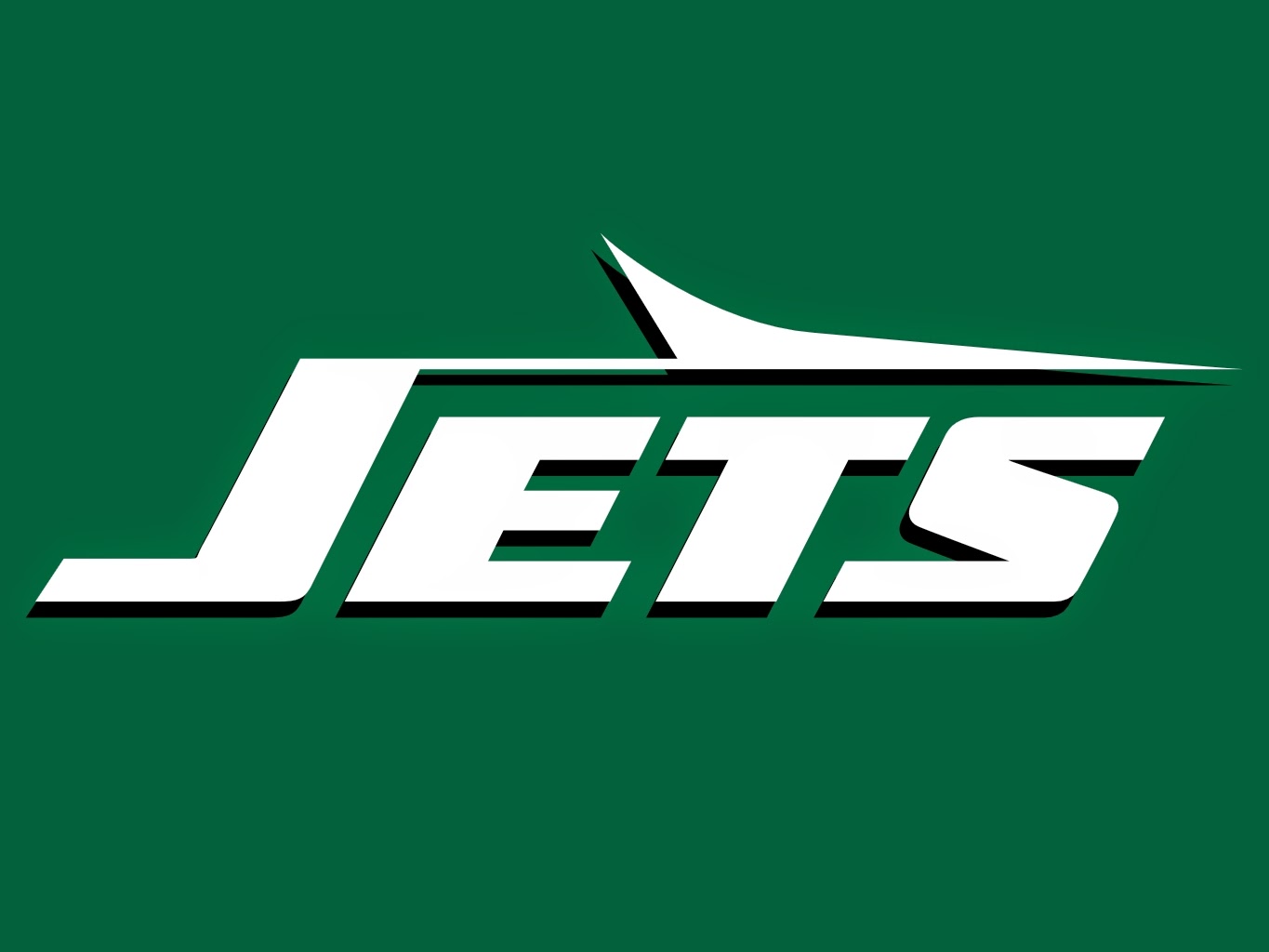 This blog post spurned from a conversation I had with my buddy, Kerry. Kerry and I have been friends for about a year now. He saw a TTM success and hit me up on Facebook asking me where he can find the addresses. I turned him on to sportscollectors.net and he was so appreciative that he sent me a package of Jets goodies and we have been tight ever since. Kerry is one of those guys that you talk to once and you feel like you've known him forever and I am quite thankful I can call him my friend.

He and I was talking about Jets football and collecting Jets stuff, as we are both die hard Jets fans when I was suddenly hit with an idea about a Jets related project to start working on. Why not start collecting signed mini helmets of the top 10 all time players in New York Jets history? The more I thought about it, the more I thought I could totally pull it off.

I then realized that I may have gotten a few of the players in the top 10 players already. That would make things a lot easier on me I thought. So, I looked today at some lists and based on all the ones I read, here is the ten players who wore the Jets green and white I will go after in my Jets mini helmet collection, starting with 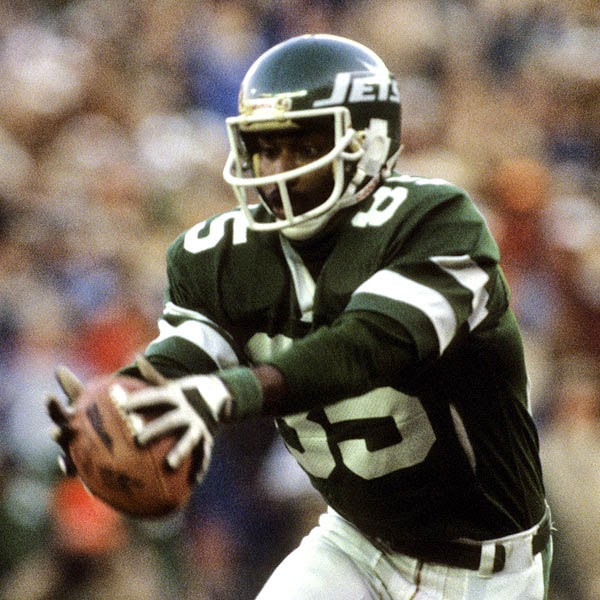 When I first started watching the Jets, Walker was the number one receiver. He played with the Jets from 1977 to 1989. He lead the league in receiving in 1978 and was named to 2 Pro Bowls in his career. My favorite memory of Walker was his 4 touchdown performance against the Miami Dolphins, one of them being the game winner, as the Jets beat Miami 51 to 45 in a wild game during the 1986 season. That's a game I wish NFL Films would release on DVD. I don't ever see Walker making any public apperances, so this might be a toughie to track down. 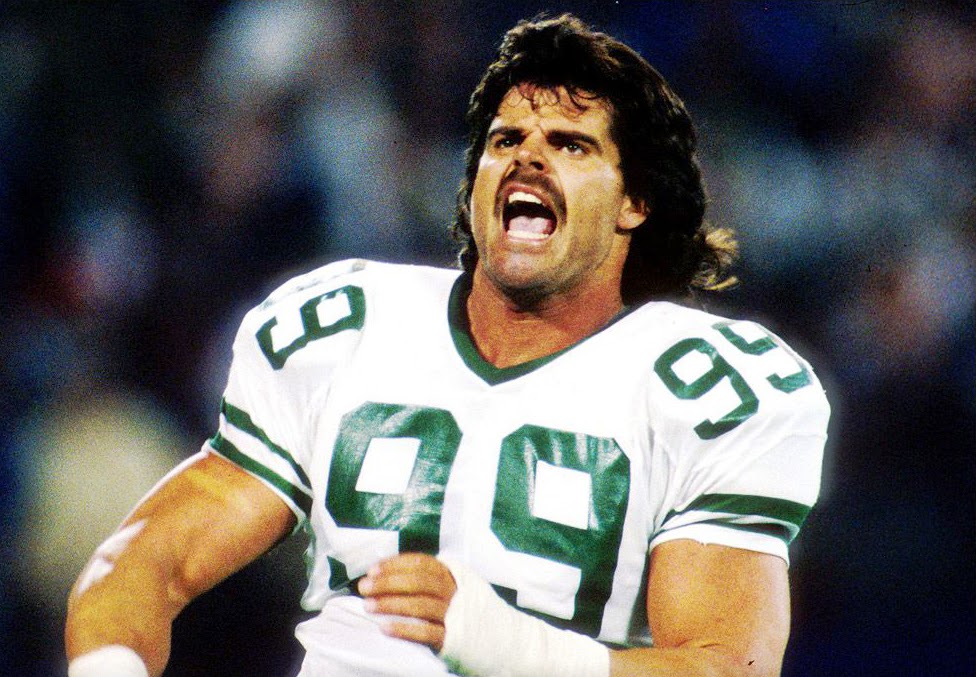 Although he will always be known for a late hit on Bernie Kosar during the 1986 Playoffs (we won't be discussing that.), this guy was a beast and quite entertaining after he sacked the quarterback. A member of the New York Jets from 1979-1988, after sacking the QB, he would do a dance that would either have him spinning around or waving his arms about and running in place emphatically. I dug this crazy cat the moment I saw him, although he wasn't exactly Mr. Popular among his teammates for crossing the line during the first NFL Players strike in 1987. A member of the famed New York Sack Exchange he was voted to 5 Pro Bowls, 5 All-Pros, 5 All AFC, was the 1984 AFC Player Of The Year and was the NFL Defensive Player Of The Year in 1982.

I managed to get Mark to sign a Jets throwback mini helmet for me during an in store appearance at a Staples in the Bronx back in 2006, I think. Yet, for some strange reason, I do not have a picture of it. Trust me, I do have one. 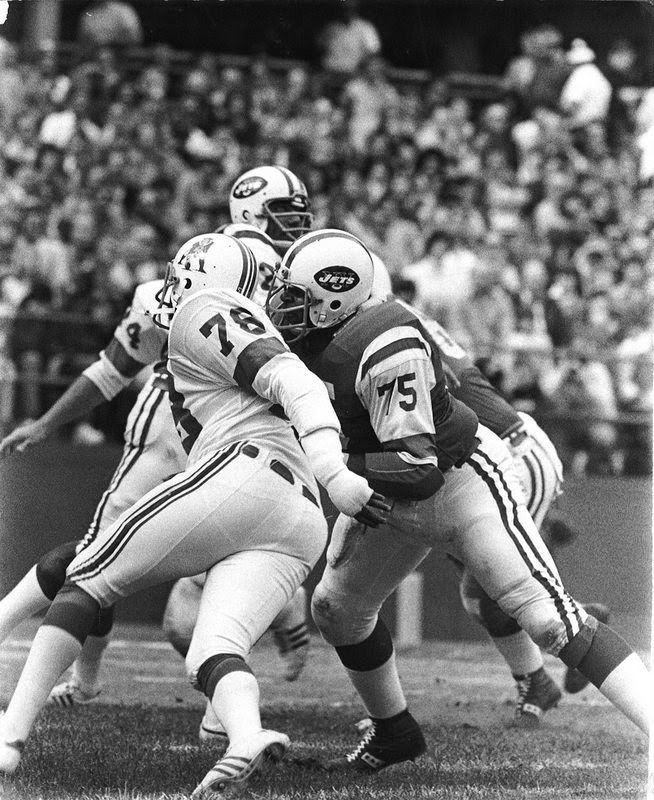 Winston Hill played with the Jets from 1963-1976. In that time he had the 10th longest string of starts in Pro Football History with 174. He played on a line that protected Joe Namath and opened holes for Emerson Boozer, Matt Snell and John Riggins. He was a 4 time AFL All Star and played in 4 Pro Bowls. Despite having his number retired by the Jets and being a member of the Jets Ring Of Honor, Winston Hill is not a member of the Pro Football Hall Of Fame. Hill will be another toughie to get on a mini as he doesn't make any appearances. However, he has signed in the past care of his restaurant, so I may try my luck the TTM route. 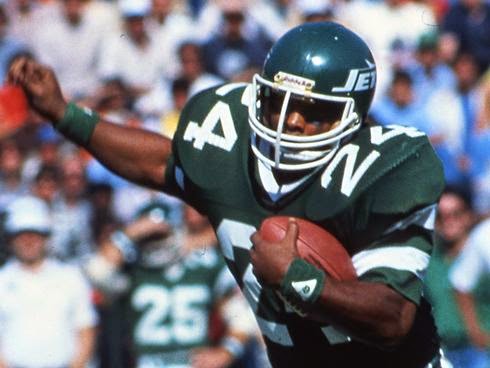 Another former Jet I hold close to my heart. He was the Jets running back from 1981-1992. He led the league in rushing in 1982, which was the first time a Jet led the league in rushing. He is second in rushing on the Jets all time list behind Curtis Martin. He was a 3 time Pro Bowl and a 3 time All Pro selection. He and Johnny Hector were part of a tandem that was among the best in the NFL through out the 80's. How good was Freeman? The Dolphins were playing the Jets in the 1983 AFC Championship game. Miami was flooded with rain leading up to the game. So, in an effort to slow down McNeil, the Dolphins didn't cover the field and the field was a wreck. It worked as the Dolphins beat the Jets and forever earned my hatred.

Of all the players, McNeil may be the toughest to get a mini helmet signed. I have never seen him make any appearances here in NY nor does he sign through the mail. My only hope is getting a signed helmet through the secondary market. I just have to be careful I'm not buying a fake. 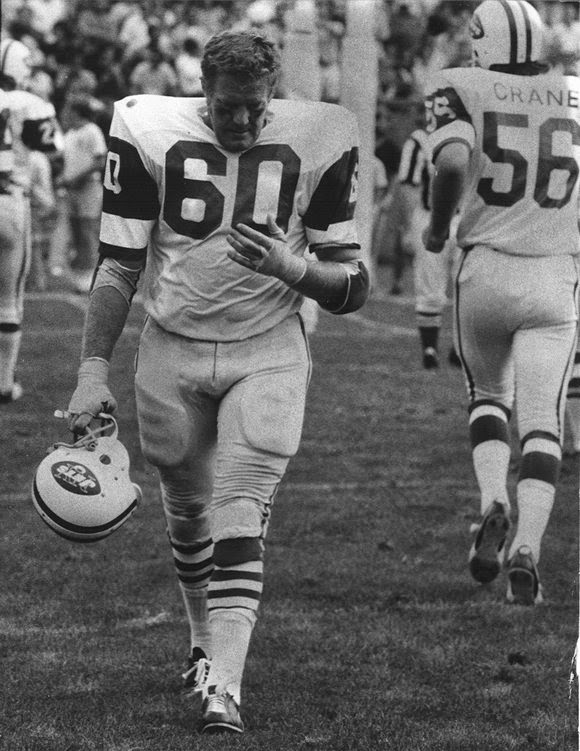 An original Jet. Grantham is only one of 2 men on this list to play for both the Titans Of New York and the Jets. Grantham was an outside linebacker and was always among the Jets leading tacklers. He played with the Jets from 1960-1972. He was voted to 5 AFL All Star teams and is a member of the AFL All Time Second Team. One of the lasting images I have of Grantham, since I never seen him play, was after the Jets won Super Bowl III, he went and grabbed the football from the referee, ran and jumped in the air in celebration.

Grantham has not been in the best of health these past few years. He's another who will be a tough autograph. My one time asking through the mail, he asked for 50.00 for the signature. I haven't as of yet sent it out, but if I am serious about completing this project I may have to. 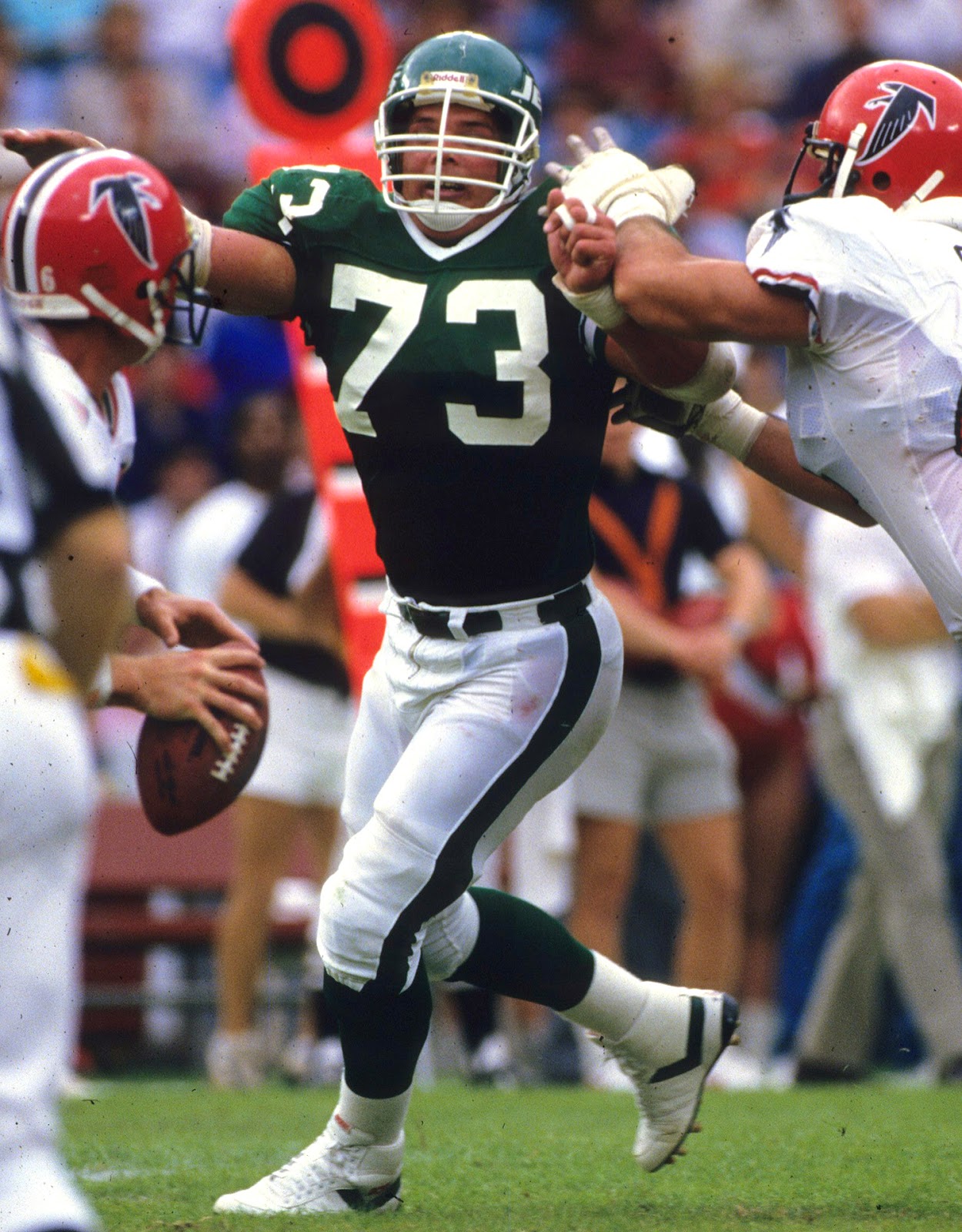 If it's a crime not having Winston Hill in the Hall Of Fame, then not having Joe Klecko in is insanity. This guy was an All Pro at three different positions. He was a 4 time Pro Bowl selection, two of them being All-Pro. He was the 1981 NFL, AFC and PFWA Defensive Player Of The Year. How the heck is this dude not in the Hall Of Fame?? The Hall Of Fame committee must have something against a player who gave his heart and soul to the Jets. No one was more feared in that Sack Exchange more than Joe Klecko. I have read countless interviews from players that said this. Get Joe In The Hall Of Fame!!!

Klecko is an in studio commentator for SNY during the Jets regular season games. I may wait one Sunday outside SNY and try to get Joe to sign a helmet for me. 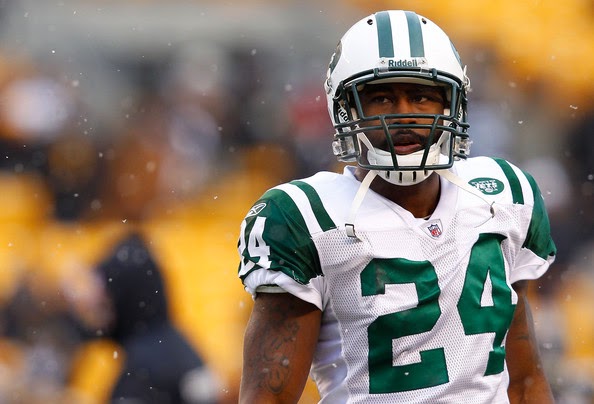 OK. Either this guy is hated by Jets fans or loved by Jets fans. I fall kind of in the middle. I disliked that he held out for so long and was threatening to do it again and as traded because of this threat, but dammit, I loved knowing that if any opposing QB was throwing in his direction, it was probably getting intercepted. Revis is arguably the best defensive player the Jets ever had. And he wanted to come back this season. Woody Johnson, in his infinate wisdom, decided not to bring Revis back. Big mistake. Our secondary is horrible. We could have used Revis, who only is a 5 time Pro Bowl player, 3 of them being All-Pro and 4 appearances was as a New York Jet.

I'm not even waiting to try and get Revis to sign. I will be shopping for a signed Revis helmet as soon as I am able to. 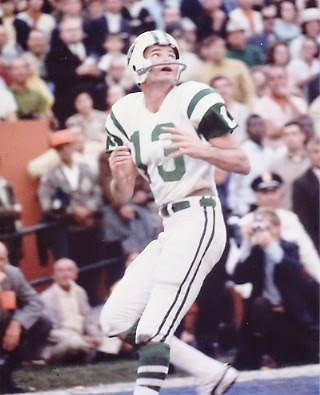 The Tandem of Namath to Maynard was the AFL's most feared. They shredded defenses on their way to a Super Bowl title. Maynard was named to 4 AFL All Star Teams, AFL All Team and was inducted into the Footbal Hall Of Fame.

I was able to get Maynard to sign a Jets mini helmet at the Long Island Card Show back in 2005. 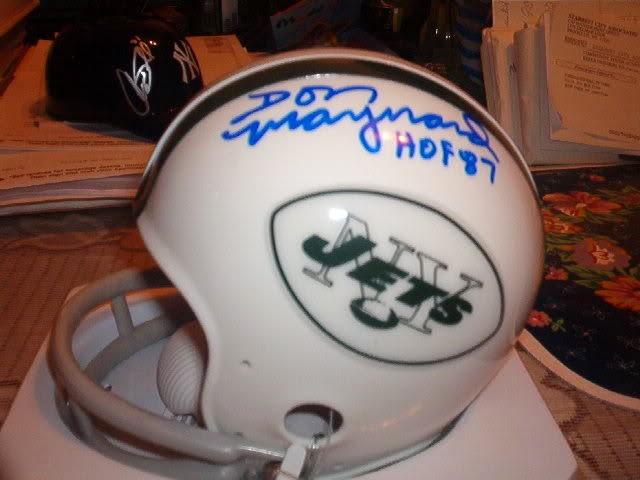 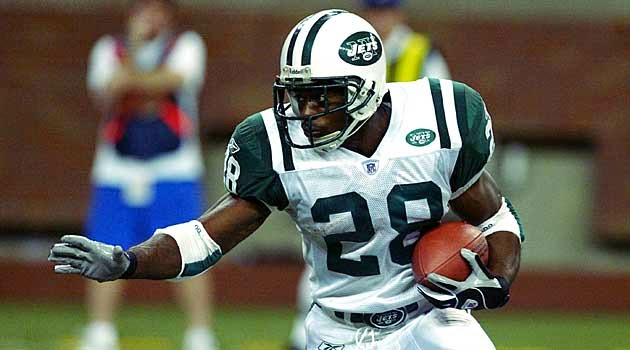 The one thing I love about the Jets getting Curtis Martin was we got him off the Patriots. One of the greatest running backs I ever seen, Curtis was a Jet from 1998 to 2005, was a three selection to the Pro Bowl as a Jet. He was the oldest player to win the NFL Rushing title at age 31. He had his number 28 retired by the Jets and was inducted into he Pro Football Hall Of Fame in 2012. I would say that Curtis Martin was the best free agent signing the Jets ever made.

I was able to get Martin to sign a mini helmet for me at Jets camp back in 2005. There was a surge of fans who made their way to C-Mart when he started signing. Lucky for me, I stuck out my arm and he saw the mini helmet and signed it. 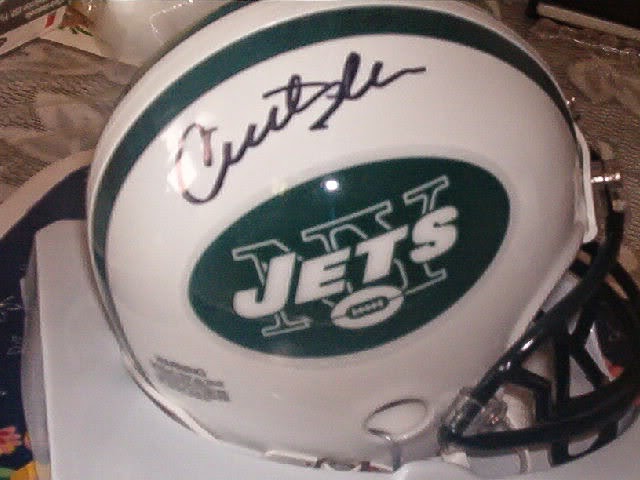 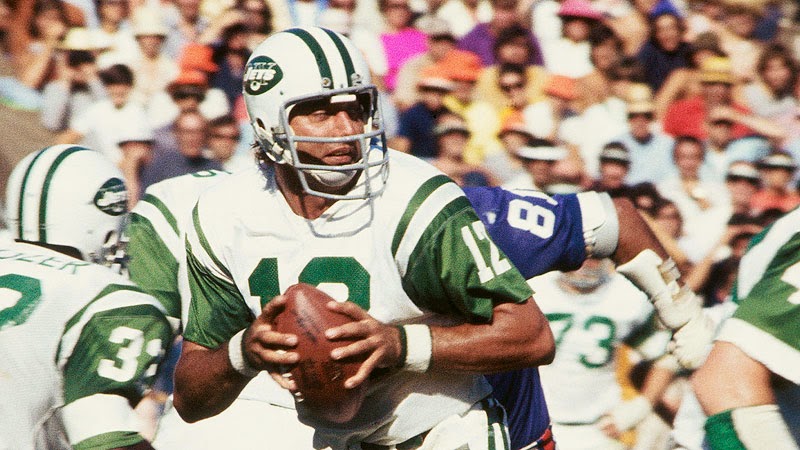 What, did you think I would say Quincy Carter? No, Quincy is a fine NFL player, but he's no Broadway Joe.

Then again, who is? Joe was the first quarterback to ever pass for over 4,000 yards in a season. He was the AFL Rookie Of The Year in 1965, he was a 4 time AFL All Star, He was also selected to a Pro Bowl in 1972. a 2 time AP AFL MVP, an AP AFL First Team All Star, a 3 time AP AFL Second Team All Star, a PFW NFL Comeback Player Of The Year, a member for the All AFL team and was inducted to the Pro Football Hall Of Fame in 1985. Of course, he led the Jets to their only Super Bowl Appearance and Championship.

Bottom line, Namath is the greatest player in Jets history.

I was extremely lucky to get Namath to sign a mini helmet for me at an in store signing for Sprint in Manhattan back in 2007. 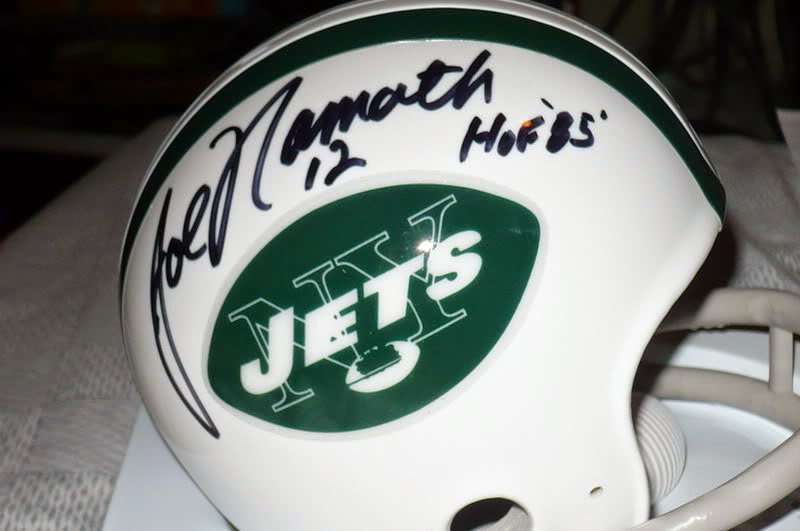 So as I start this project, I already have four of the top 10 Jets signatures on mini helmets. My one rule as I go about this is that the helmets I get the players to sign are the same helmets the players wore during their careers as Jets.

This is a project that I think I'm going to have a lot of fun with. To be able to get helmets signed by some of the greatest players in Jets history will be a thrill for me. A lot of these players were guys I watched when I first started watching the Jets back in 1980. The others, I've seen on film or read about have left an impression on me nonetheless and it would be an honor if I could add their autographs to my Jets collection. Who knows, maybe after I'm done, I can start on the next ten great Jets players.

Thanks for the idea, Kerry.
Posted by Unknown at 6:33 PM