Great. Now I Will Have The Fox Sports Theme In My Head Whenever I Watch The Yankees 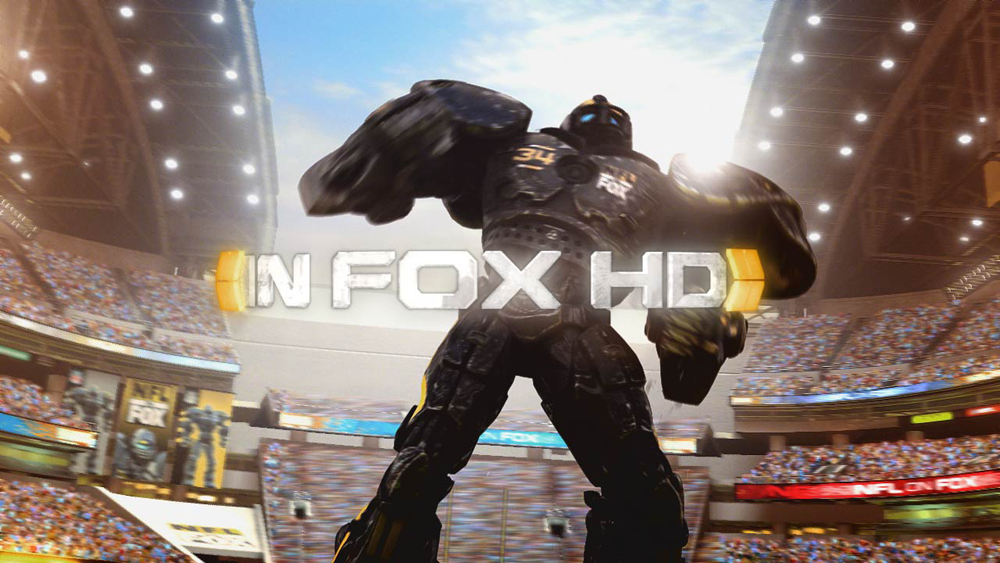 Ahhhhh, nothing gets me excited about Baseball and my New York Yankees like......Cleatus, The Fox Football Robot??

Bear with me folks. I have not been sipping on the funky wine. Yes, Cleatus is synonymous with football on Fox, but the good folks at Fox allowed a company named ActionHeads to produce figures of Cleatus in different NFL team colors. I do like the Jets figure and have been meaning to pick it up.

So, when I was in California visiting my girlfriend, Gina, we went into Fanzz, a sports shop in Westminster Mall. We were going to the Dodgers game later that night and I wanted to get a Dodger player t shirt to wear to the game. I was able to get a very nice Matt Kemp Brooklyn Dodgers t shirt and Gina bought me a Jackie Robinson Dodgers player t shirt. While we were walking to the register, I saw a boxed figure that warranted a closer inspection.

When I picked it up, I noticed it was a Cleatus figure, but it wasn't painted in any football team colors. It was a Cleatus painted in Yankees colors. I had never seen one before. Figures, I would find this 3,000 miles away from home. It was pretty cool, but after much debate, I decided to put the figure back and save the money for the trip.

So, when I get back to New York, Gina tells me I have a package coming my way. I was wondering what she could have possibly sent my way. Maybe a memento from our trip to Dodger Stadium? A Spider-Man Lucha Libre mask I saw on Olvera Street? When I got the package, it was none of the above. It was the Cleatus Yankees figure I wanted. Does this woman know me or what?

Now, after a year of it sitting on my shelf by my autographed baseballs and being oh so lazy, I finally break him out and review him. 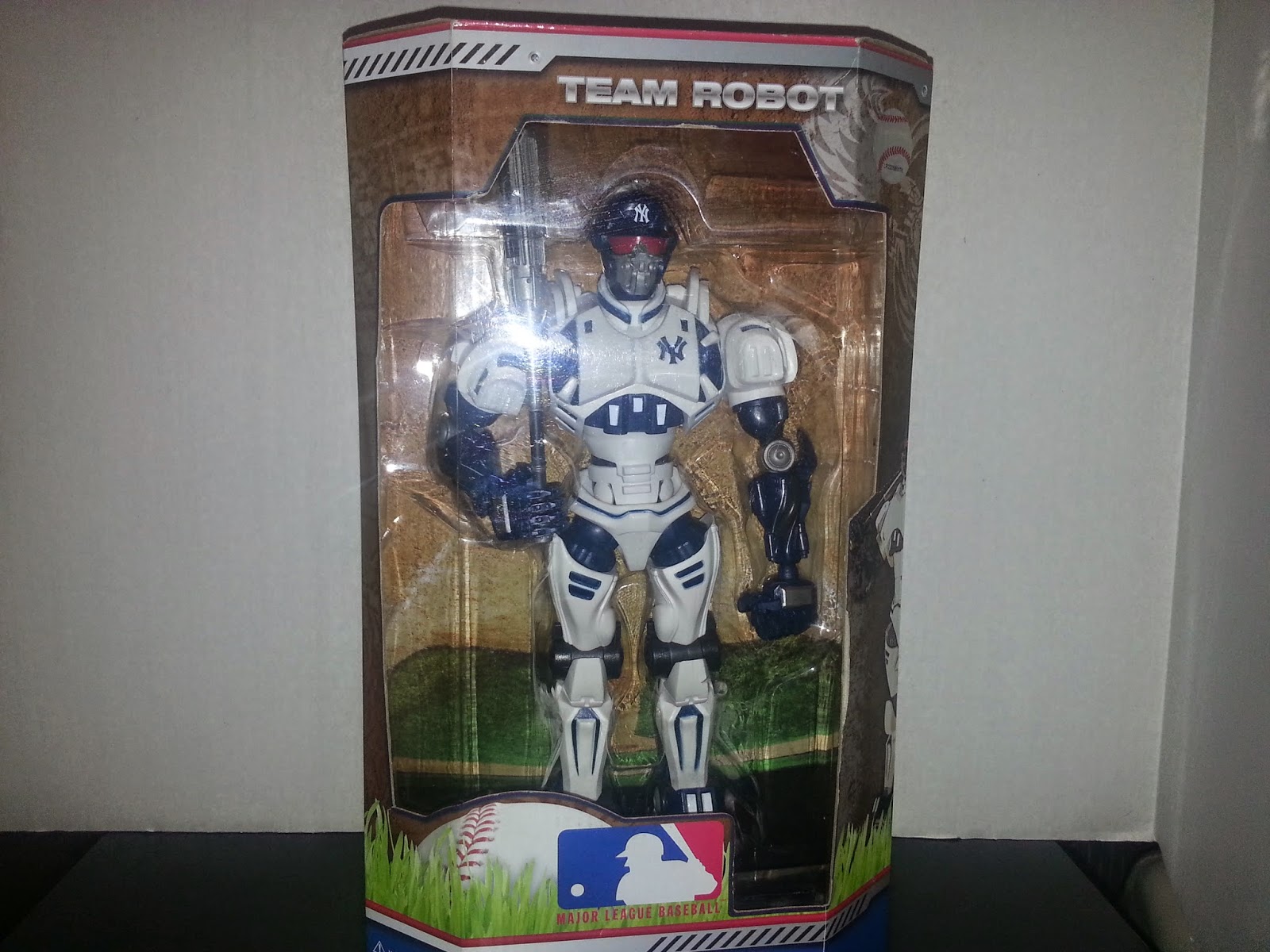 The robot comes in a pretty generic box. Would have been nice if it was at least in team colors. 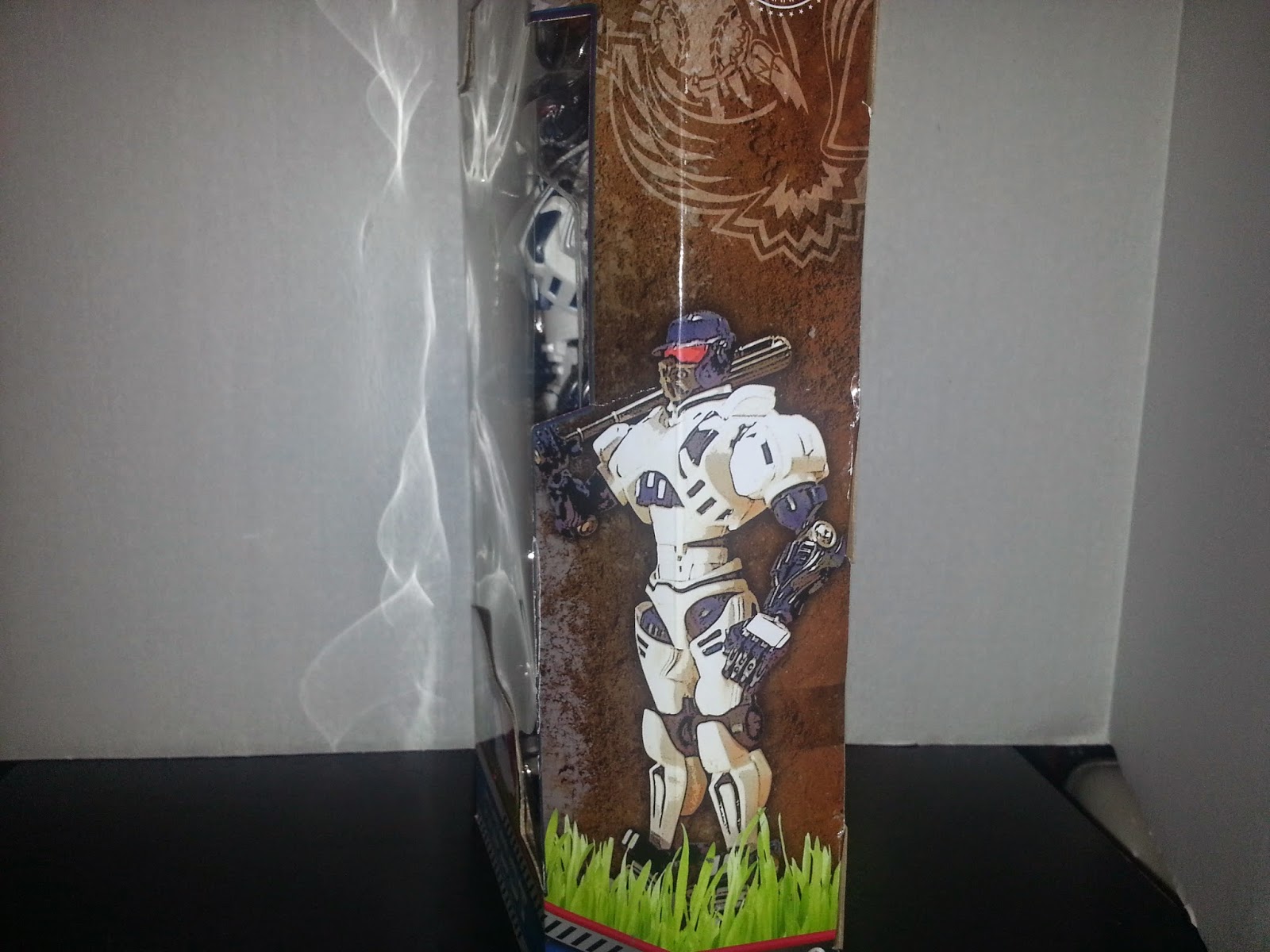 Side of the box has a picture of Cleatus. At least he's in team colors here. 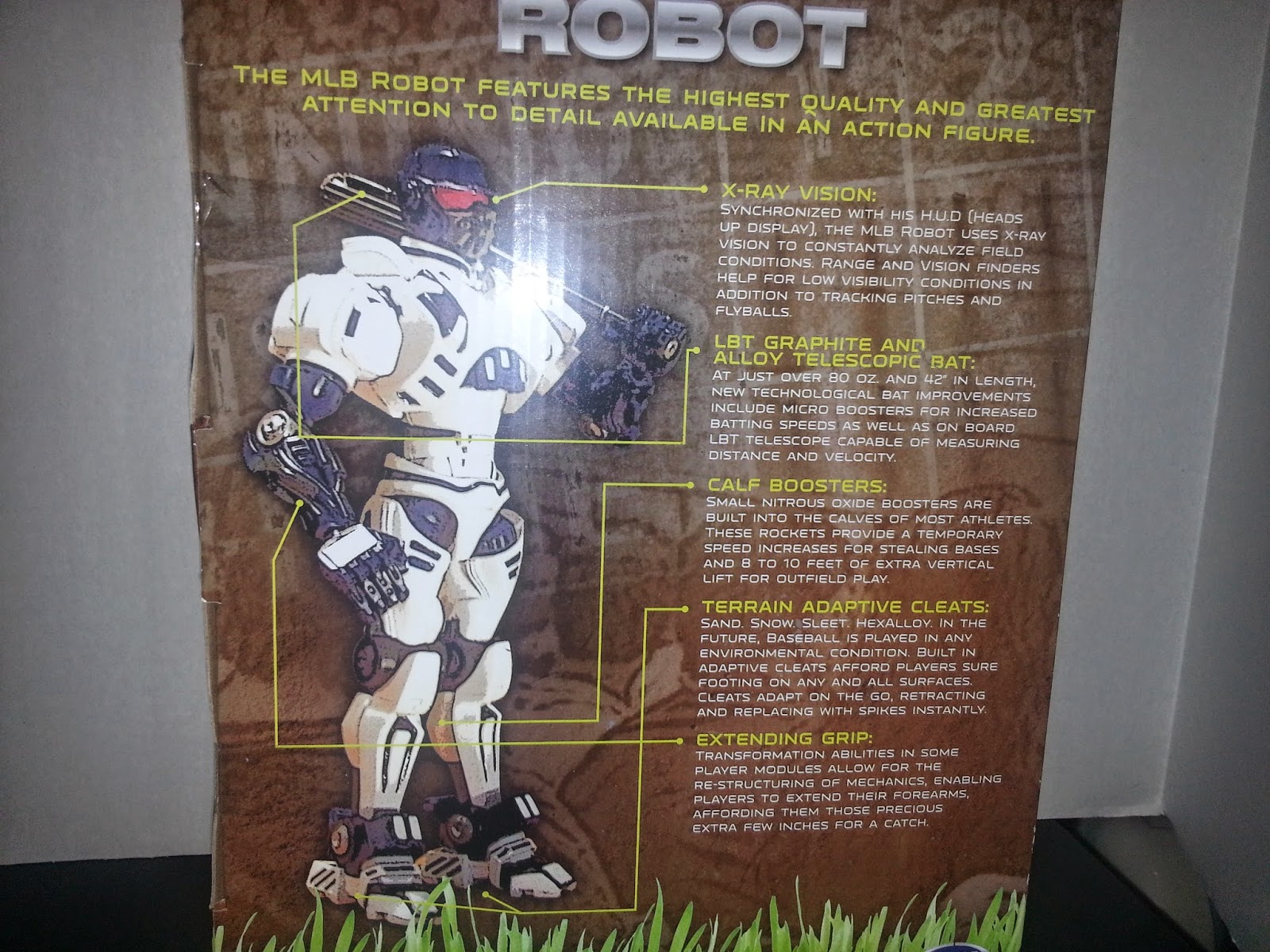 The back of the box has the supposed specs of Cleatus. Looks like he would be on the Mitchell Report in no time. 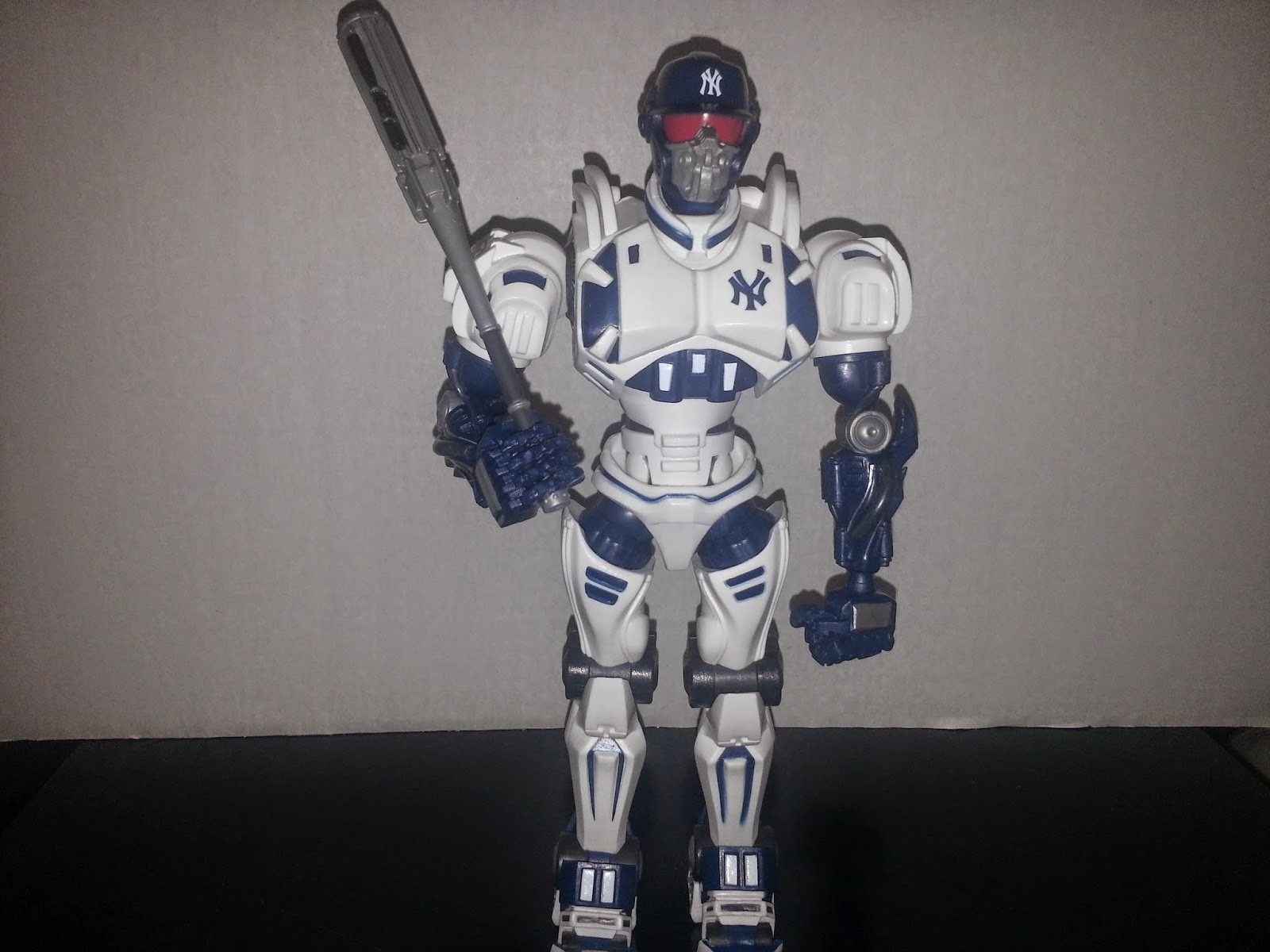 I'll tell you what, Cleatus looks pretty bad ass out of the box. I love the colors on him. Perfect combination of Yankee blue and white. 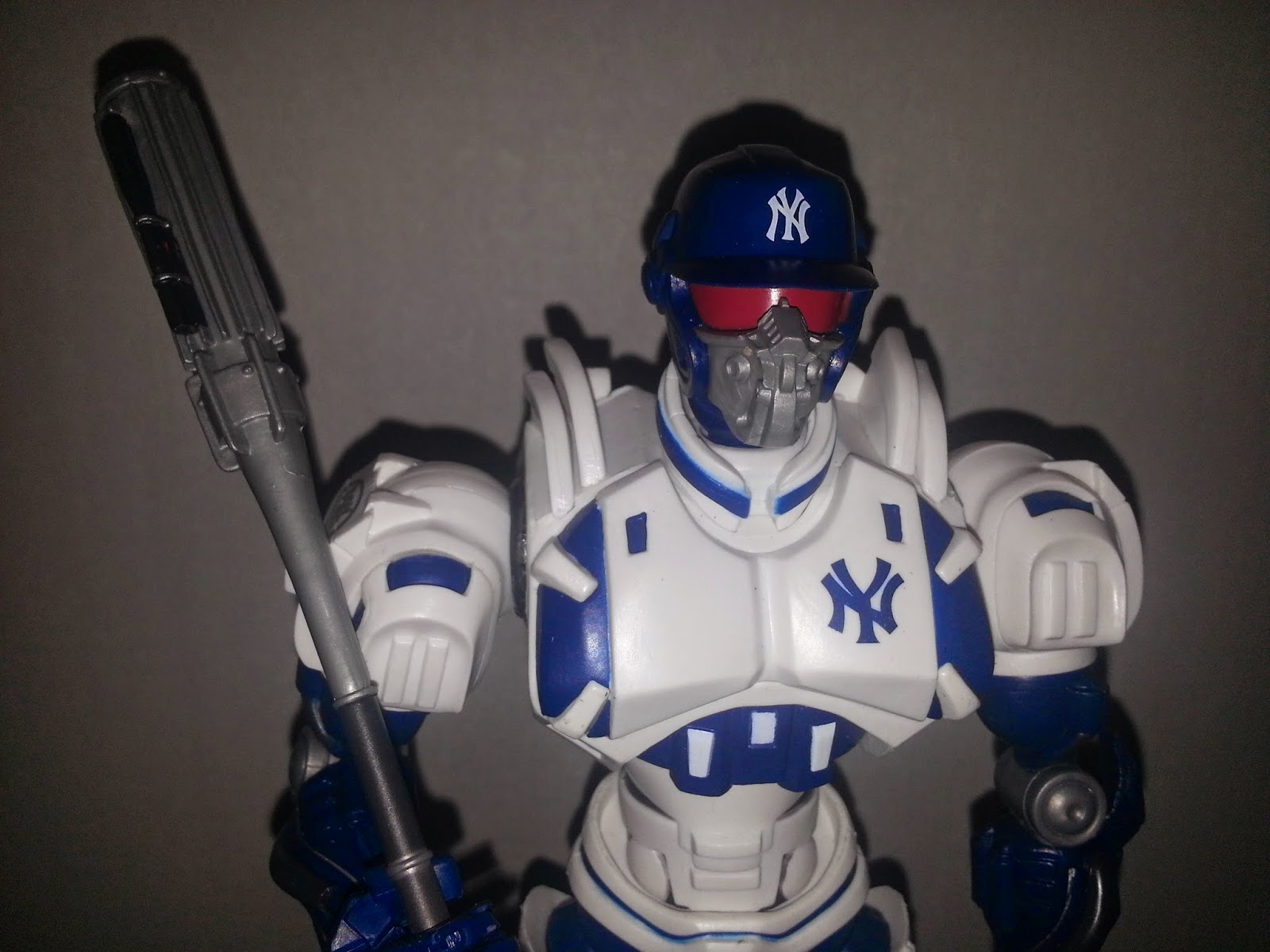 Close up of Cletus. Had that interlocking NY on his chest, which I think is awesome. With the red sunglasses, he kinda looks like Optimus Prime. 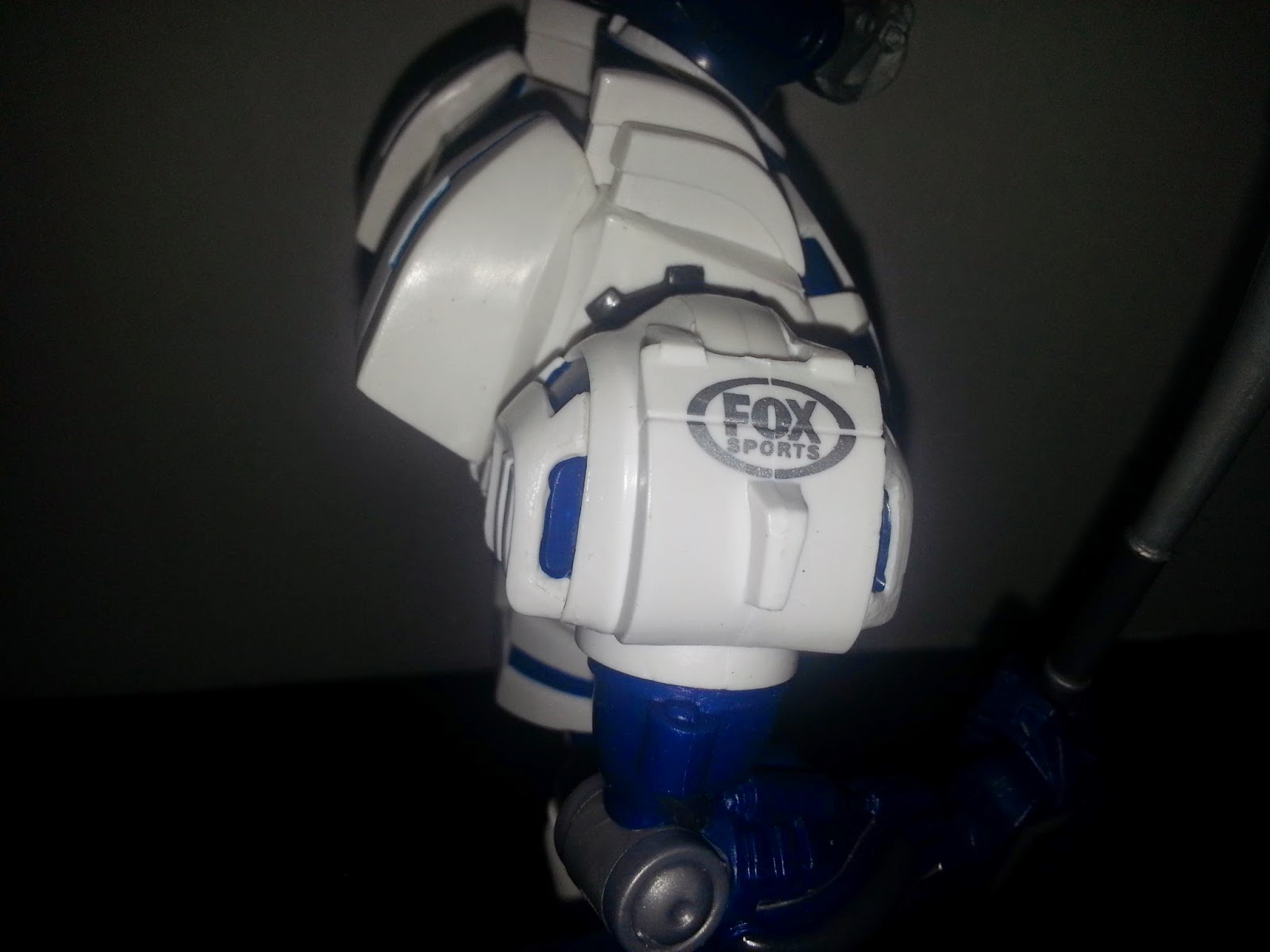 Cleatus is wearing a special Fox Sports patch on his right shoulder. Wonder if this will sell for the hundreds of dollars that the Lou Gehrig patch did on eBay. 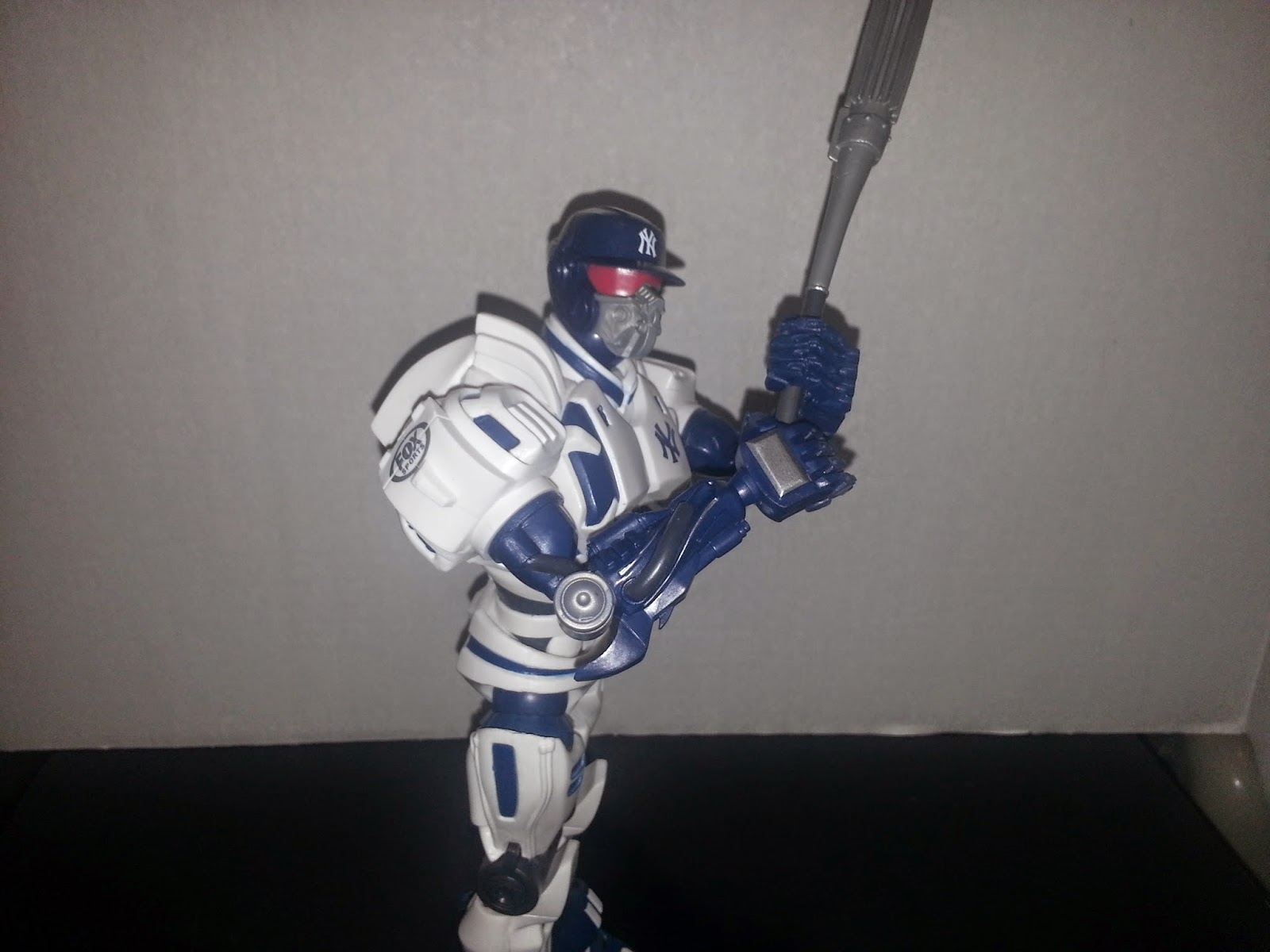 One of the unfortunate things about the figure is that the fingers don't open or close. Would help holding the bat on both hands if you wanted to pose him that way. 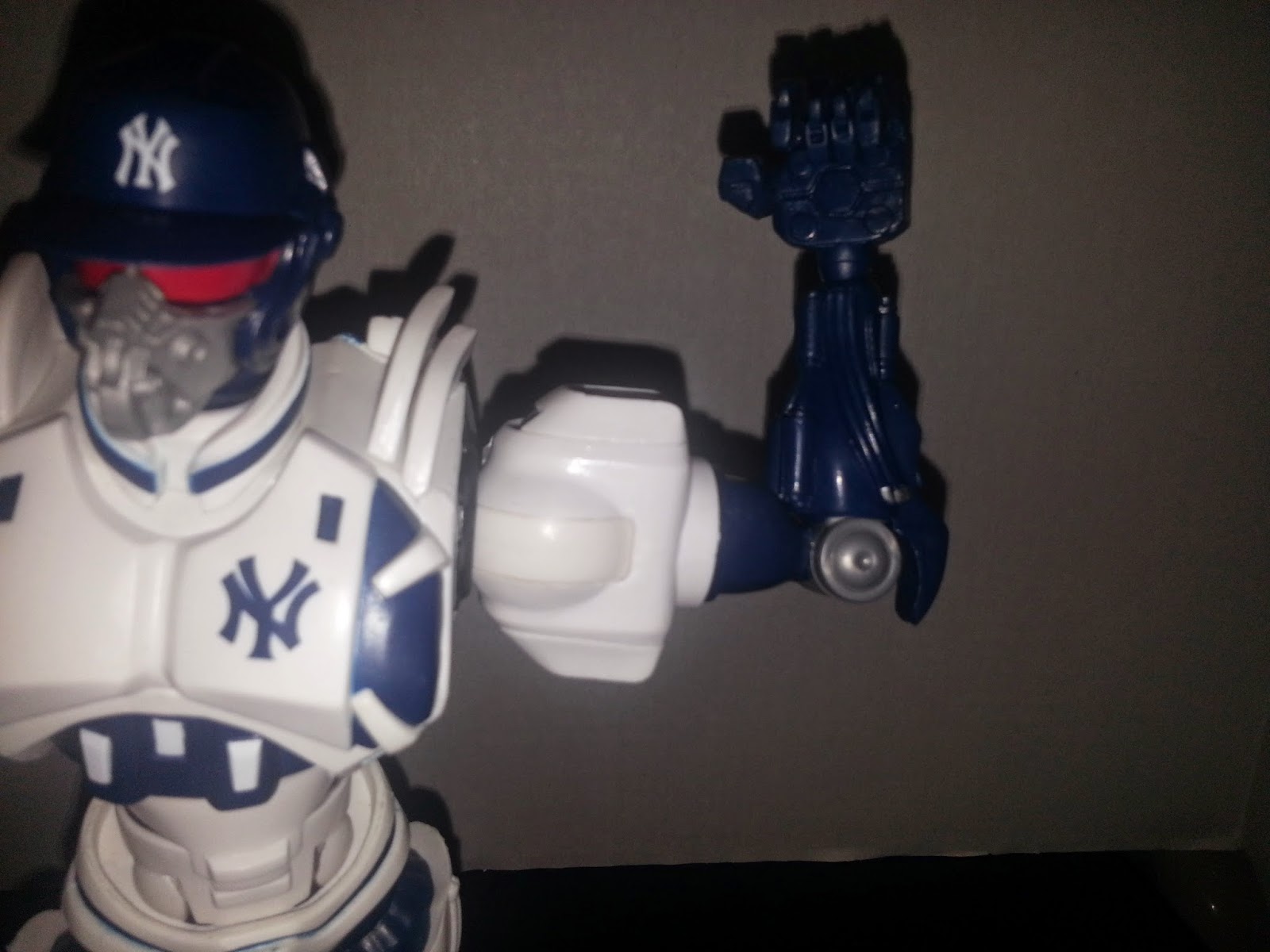 Cleatus has ball joints on the shoulders and a bend at the elbows. There is no bend on the wrists, although they do spin around. 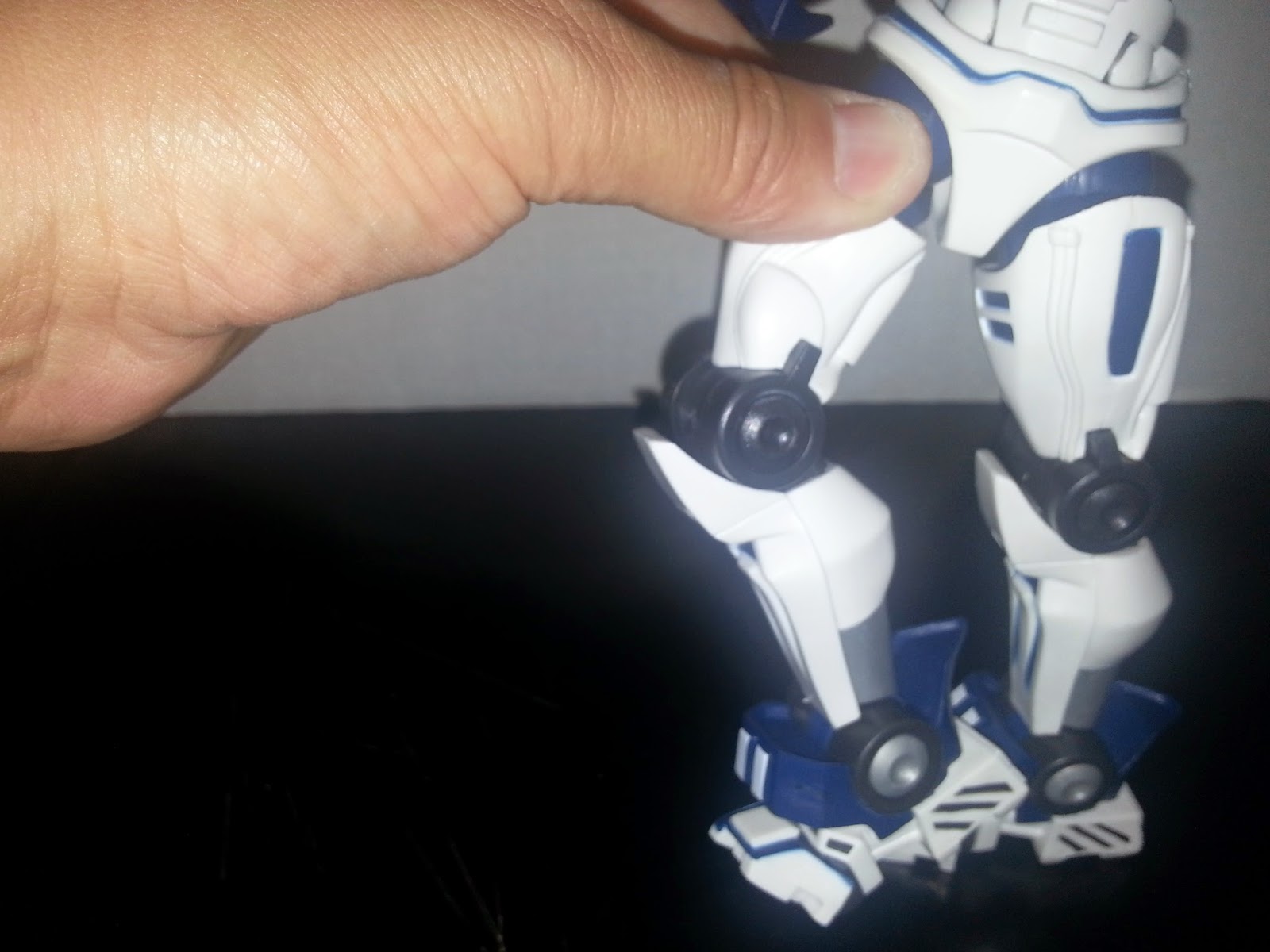 There is a bend at the knees, ankles and at the toes. Unfortunately, since the figure is pretty top heavy, Cleatus is prone to falling over like I am after a few too many adult beverages. Like the wall does for me, I had to hold Cleatus up to show the bends. 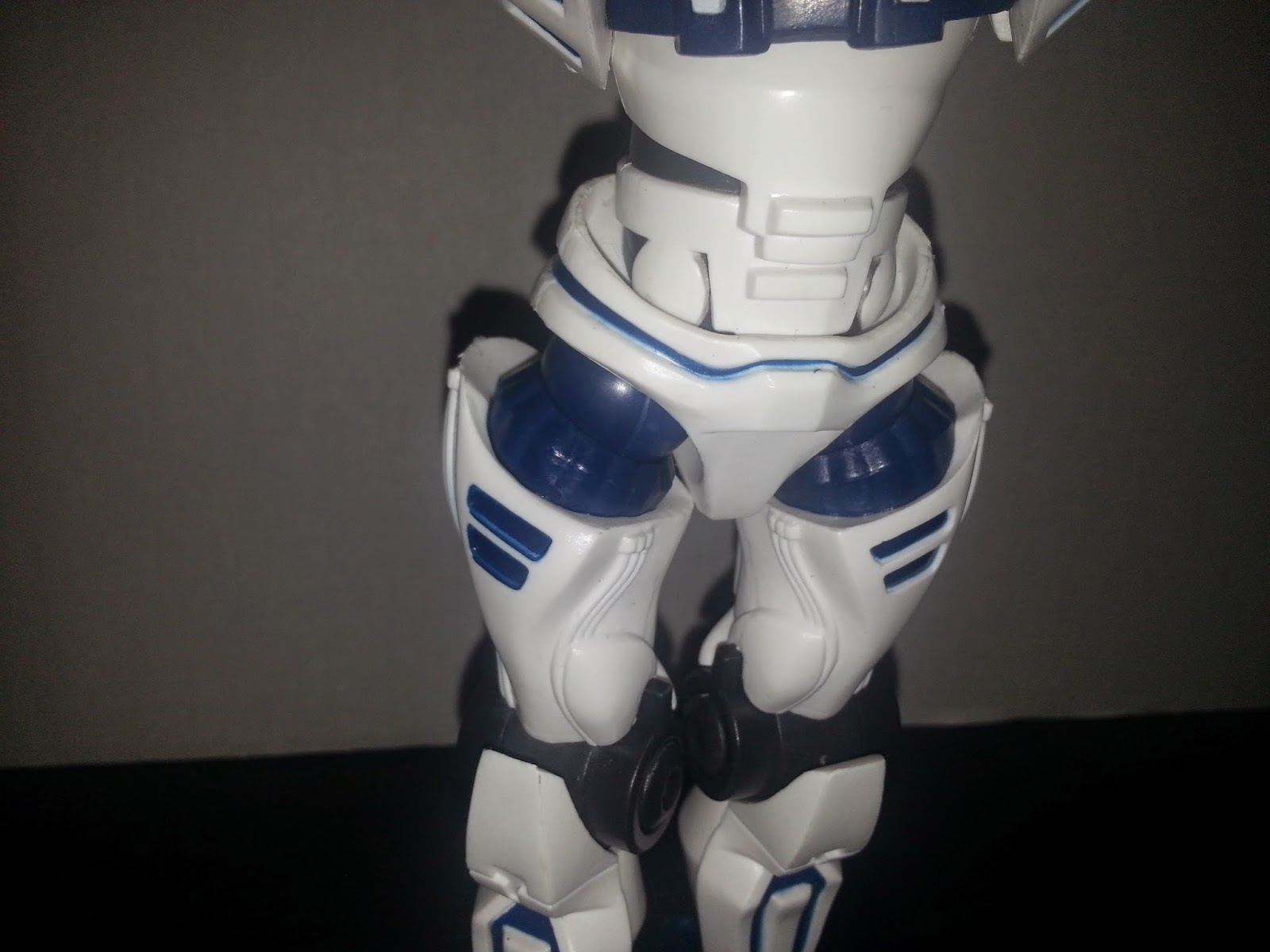 Cleatus has a hip swivel and ball joints on top of the legs. 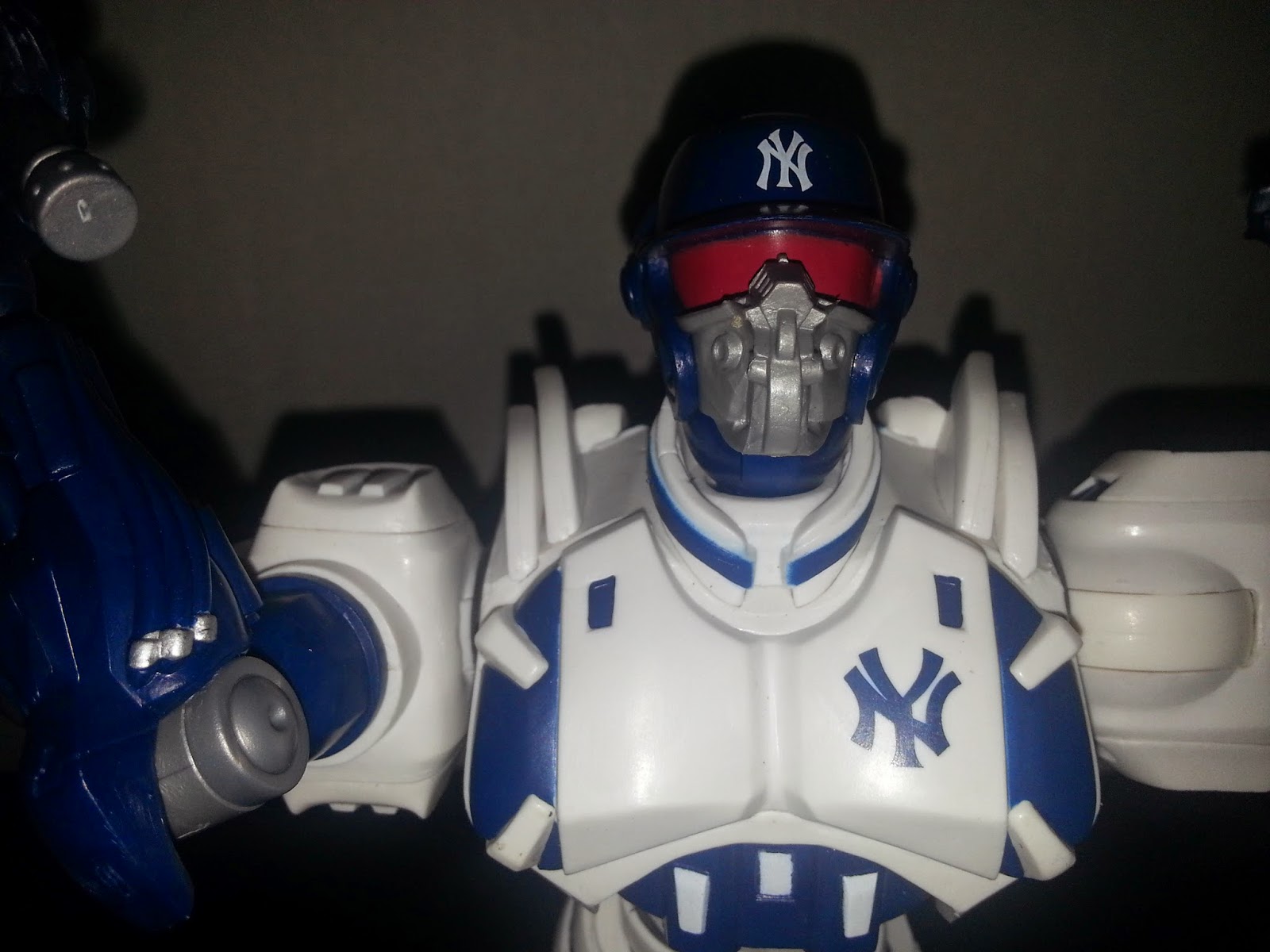 The head can go side to side, but barely goes back and forth. Not going to get a whole lot of movement in the neck area.

The figure has some decent articulation. Once you get the joints loose you will be able to pose Cleatus just about anyway you want to. You will have some limitations, but a collection with a better imagination that I do will be able to get some decent poses out of this figure. Just remember that he is top heavy and is prone to falling over. I will just keep him in the box until I can get a display case and I will put him with my other Yankees statues, bobbleheads and figurines. I really like having this figure and think Cleatus will make a great addition to any baseball collection.

Thank you to my sweet baby for the great addition.
Posted by Unknown at 8:34 PM