Autographs. What Do I Need? 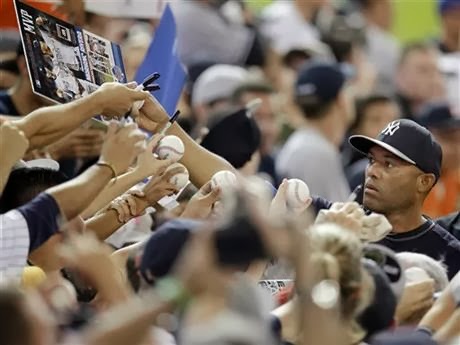 One of my main goals for 2014 is to get back into the autographing game. I used to love going to the old Yankee Stadium and just wait outside the players entrance and try to get some baseball cards, baseballs or pictures signed by various Yankees and other players.

As I got older and the hobby grew, I got tired of having to deal with pushy collectors and dealers for autographs, so I stopped hanging outside the ballpark. A lot of collectors will push an old lady out of their way for a signature. It's disgusting.

I started attending signings were it's more of a controlled environment (sometimes), even if I sometimes had to pay for the privilege of having my item signed or picking up what the player will sign. Then the prices started going up and I stopped going to those as well.

To fill my autograph needs I started buying certified autographed cards. I filled a lot of holes this way and I will still continue to pick up autographs as long as the price is right. I also sent a lot of requests through the mail, or TTM as we call it in the autograph community. Due to lack of time, the letters stopped going out and I completely stopped collecting autographs.

Being able to attend the NFL festivities this past week not only got me wanting to get back into the hobby but also got me thinking about what autographs I want to add to my collection. Now, I have a lot of nice certified signed cards, players like Derek Jeter, Joe Namath, Walt Frazier, Martin Brodeur and even a Babe Ruth.

What I want to add is more signed baseballs, photos, magazines, etc. I also started thinking about which players I want to add. I would like to also one day get a few jerseys signed, but I have a hard time buying jerseys for me to wear, much less buy them for autographing purposes.

So, I kind of came up with a "wish list" of players I want to have something other than a card signed. Meaning, I may already have a card signed by the player, I just want something I can display on a shelf or on my wall. Something that will grab anyone's attention as they enter wherever I ultimately display my stuff. Hopefully in my home.

I also narrowed the list down to players who are still living. Kind of hard to get a someone who's passed on to sign a ball for you. That being said, here's the list

Jeter is one of the most expensive autographs you can buy (Thanks a lot Brandon Steiner for that.). A legit signed Jeter can run you anywhere from $150.00 to about $500.00. Jeter is also a tough signature to get. Listening to various collectors, Jeter may only sign for children and women or not at all. Then there was the report that came out a couple of years ago where collectors would be lined up outside the Yankees complex in Tampa when Jeter was rehabbing, waiting for him to come out. He would either pull up his car and sign a handful or none at all leaving collectors who waited as early as 4am to walk away empty handed. Jeter might be one of those I may have to save my pennies and buy.

I'd either love to have a ball 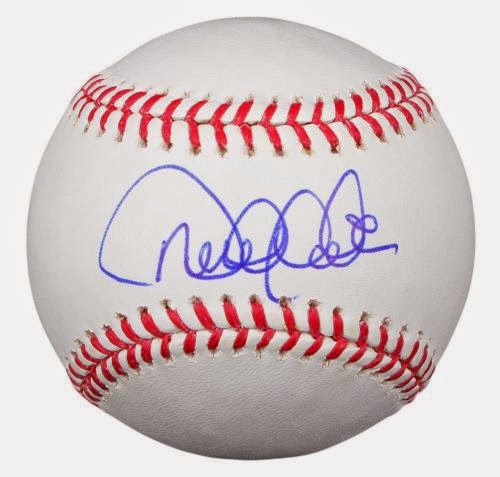 Or a framed signed photo 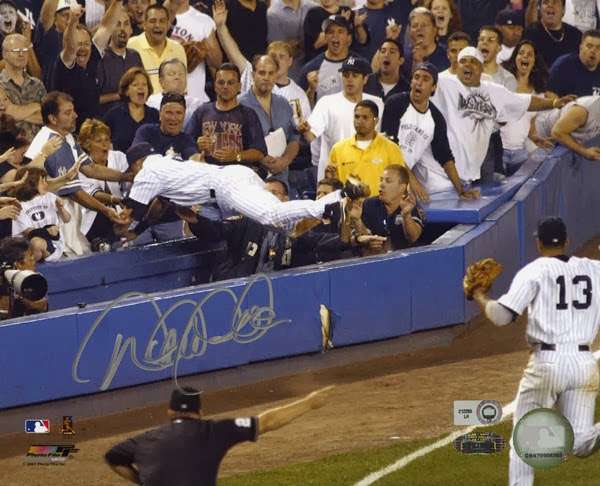 As a hockey fan, I feel it's imperative to own an autograph of the greatest player to ever skate. Gretzky can be a pricy autograph as well, with signed pucks going for about $200 dollars, but sometimes you can find a signed puck in the $75 dollar range if you look hard enough. I have heard that Gretzky is accommodating when approached. That said, I will be keeping an eye out for appearances by The Great One this year. 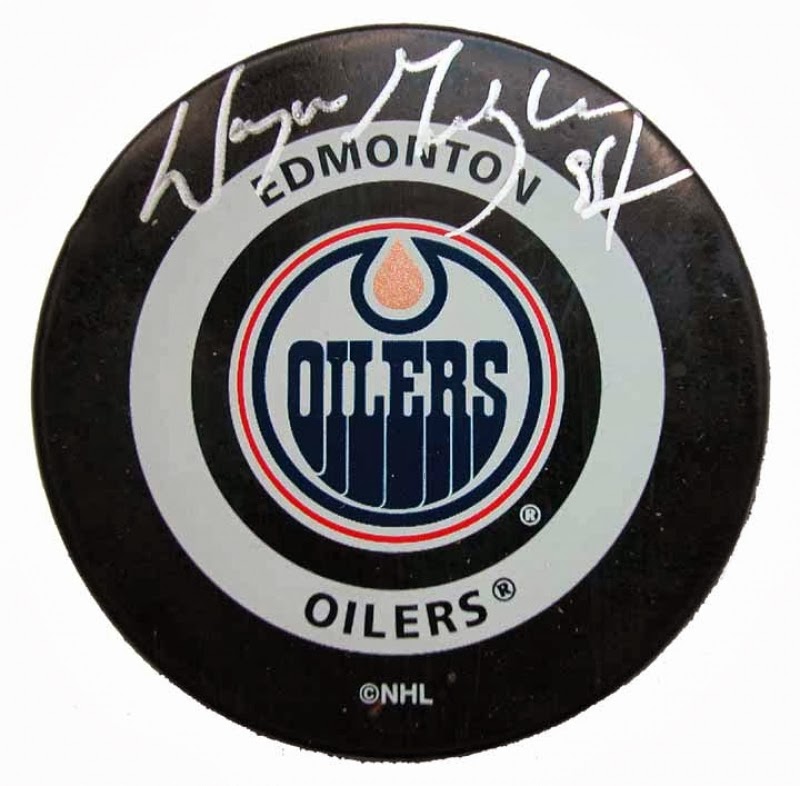 And maybe a photo 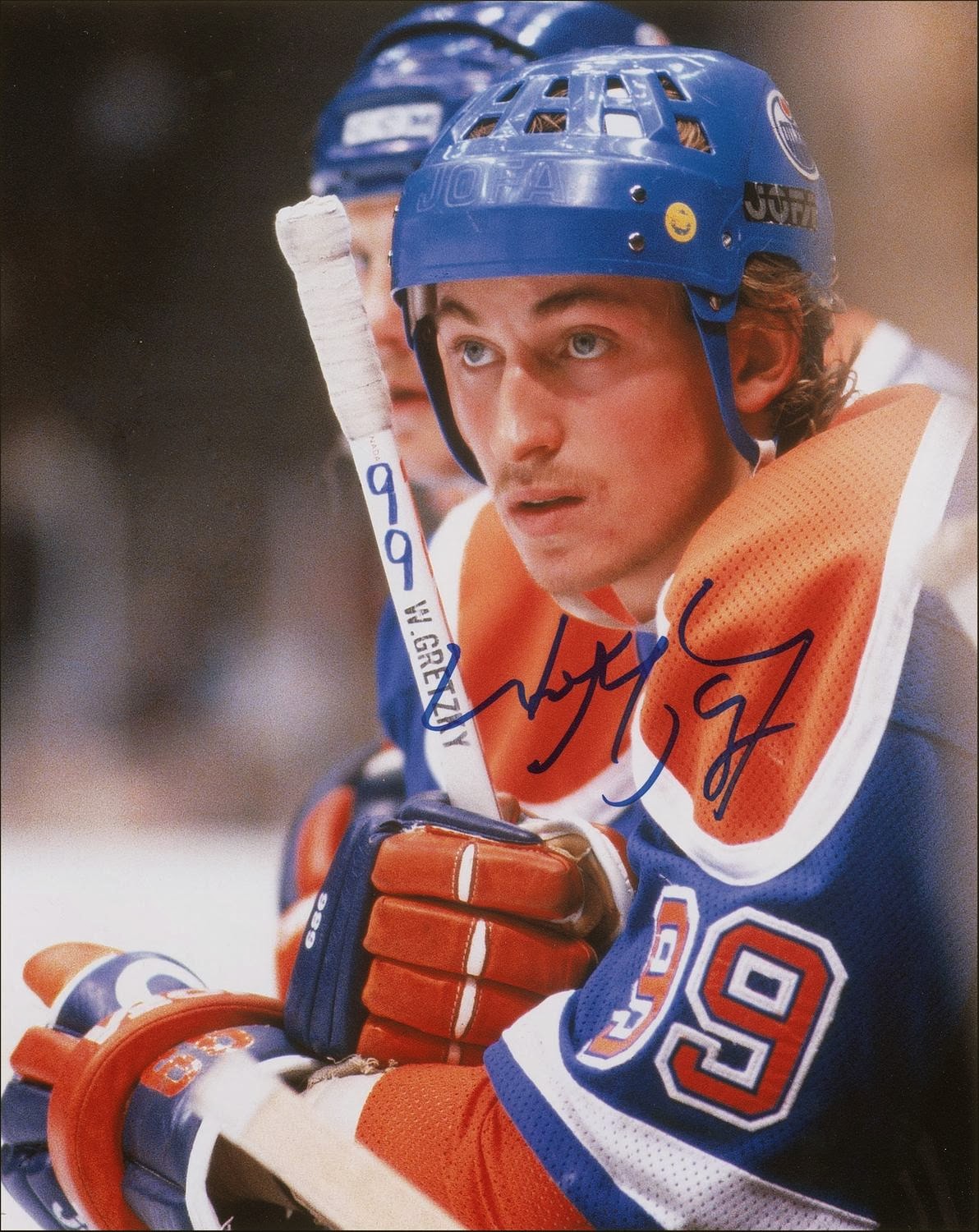 I would get some Kings stuff signed as well. Just no Rangers Gretzky.

As one of my all time favorite hockey players, you would think I would already have Bossy in my collection, and you would be right. I have a few certified cards in my Bossy PC, but I don't have any signed memorabilia of his. That should change come March when Bossy does a card show not too far from the Nassau Coliseum where he played during is career. I am of mind that I don't care what it will cost to have him sign for me. Bossy signed pucks are among the most relatively inexpensive for a NHL Hall Of Famers and of the all time great snipers in the history of the game and I could have picked one up a few times. Reason why I haven't is because I really want to meet one of my childhood heroes and I just may have that opportunity next month.

I really want a signed puck to put on my Bossy shelf when I put one up. 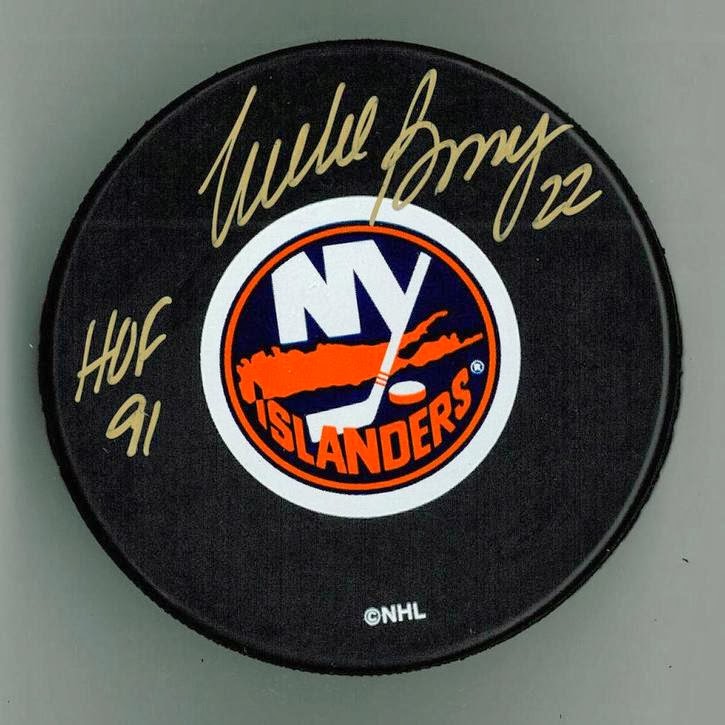 I hope to also add a signed photo and McFarlane figure at some point. 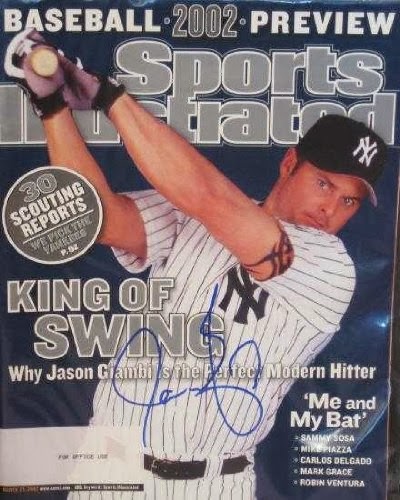 With Giambi signing to play with the Indians this upcoming season, I may have my shot at getting him to sign one. I just have to find this issue.

Ewing is my all time favorite Knick. I do have a PC of Ewing and nothing would be better if I could add a Ewing signed basketball to my Knicks signed ball collection. Ewing is a tough autograph to get. I did hear rumors that while he worked for the Knicks MSG playoff games in studio he would sign a couple after leaving, so I missed out on him. His autographs are pretty expensive, going for anywhere from $200 dollars for a certified card to $700 dollars for a signed basketball. I will have to be lucky to add Ewing to my collection.

I would love to add a signed basketball 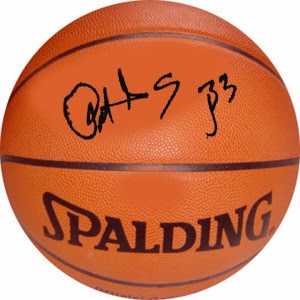 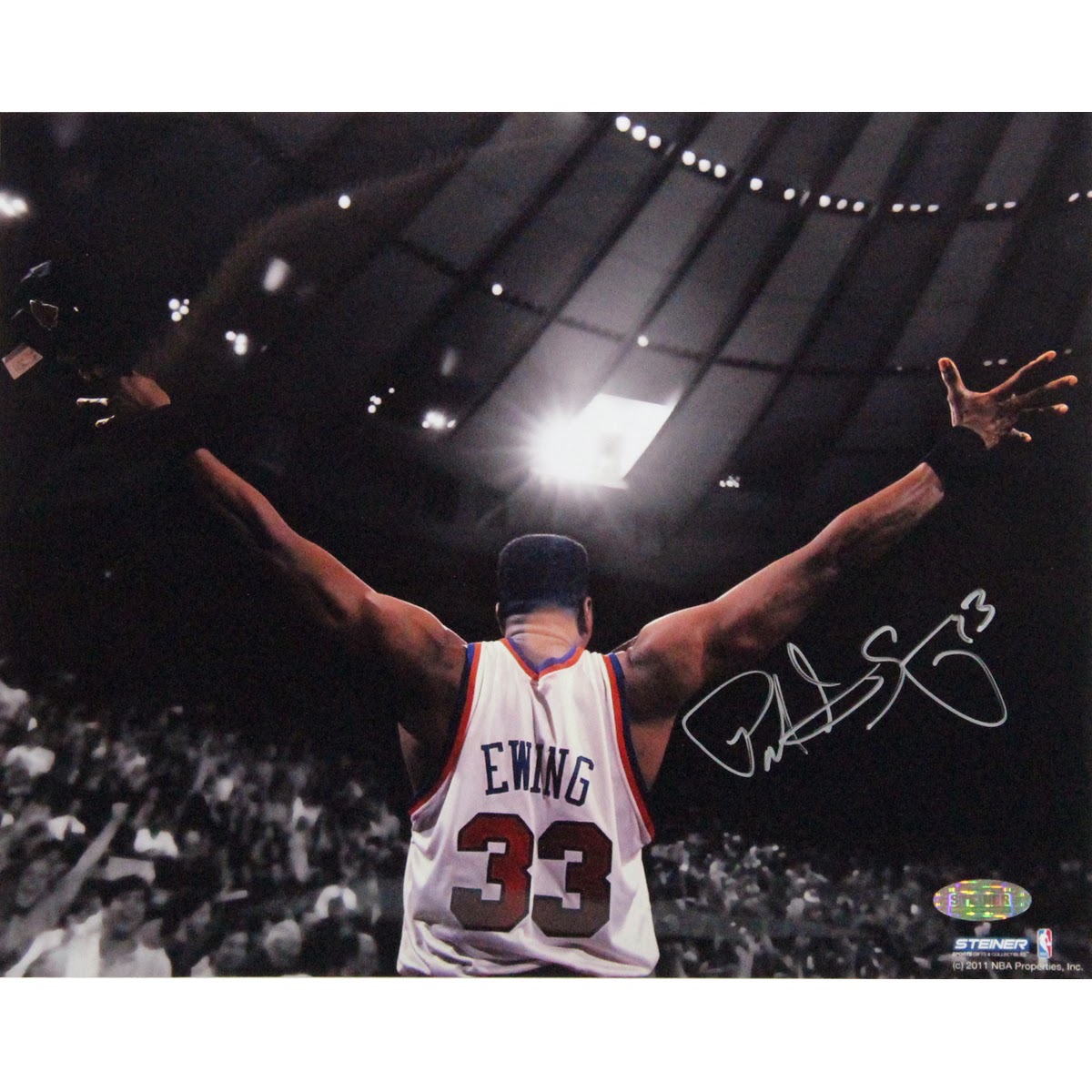 Howe is another autograph that any hockey fan needs in his collection. Gordie was considered the greatest player until number 99 donned the ice and broke all of Howe's records. Howe used to sign through the mail for free, but once the hobby boomed that stopped. Howe is one of those missed opportunities that I kick myself for and will be another that I will have to purchase as at his age appearances are very rare. Howe is pretty inexpensive for someone of his stature, averaging about $75 dollars. 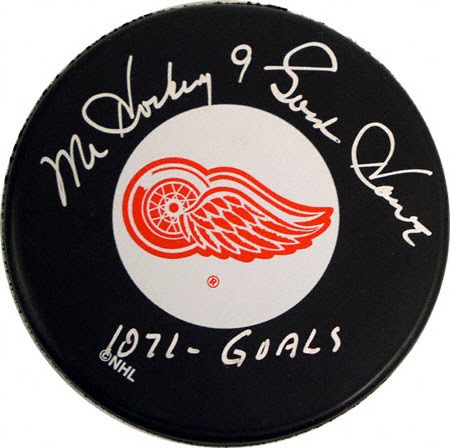 One of my all time favorite Yankees. With all due respect to Mr. Jeter, the Yankees do not win all those World Series if it wasn't for Mariano. With his retirement, I actually expect Rivera to be around making appearances. I missed out on a few last summer, but I will not do so again if I can help it. Like Jeter, Rivera's autograph has become pricey (Thanks again Brandon Steiner), but I am confident that I can get Rivera at an appearance.

I do want a Rivera signed ball pretty badly 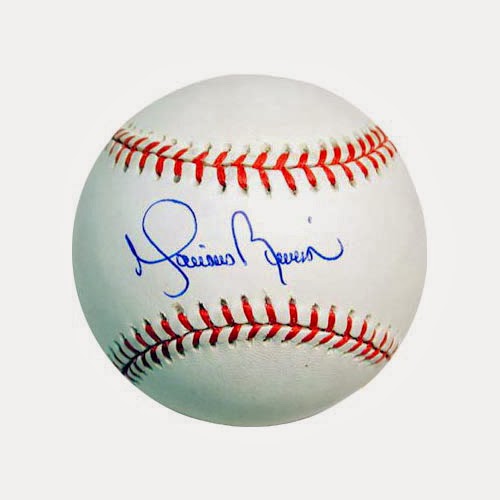 But this signed photo makes me drool every time I see it. 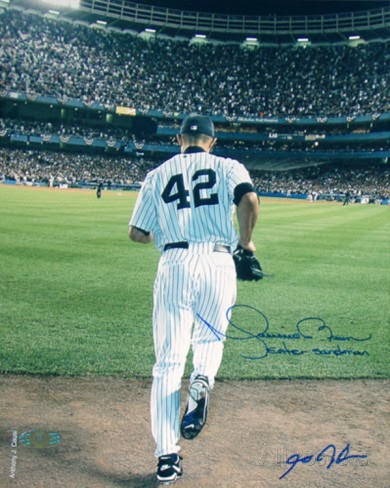 I don't care what anyone says. Martin Broduer is the greatest goalie that ever played the game. End of story. Save the arguments for Roy, Sawchuck, Belfour or Parent. The numbers back up my claim. All time wins leader, check. All time shutouts leader, check. 3 Stanley Cups, 4 Vezina Trophys and 2 Olympic gold medals support my argument. I have had the pleasure of meeting Broduer a few years ago when he made an appearance at the NHL Store here in NYC and got a 5x7 signed photo the store gave out. I have also acquired a couple of signed photos, but what I don't have is a signed puck and I would like to add one this year. I have a Broduer PC of cards, figures, pucks and other stuff. Would like that signed puck for the PC. 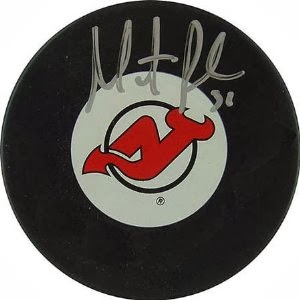 When I first started watching football, Joe Klecko was a player I really liked. He was a hard nosed player who made All Pro at 3 different positions. How is this man not in the Pro Football Hall Of Fame? It's a joke that he is not enshrined in Canton. I haven't really seen Klecko making any apperances, but he does work at SNY doing the Jets post game shows and the studio is in NYC, so I could have waited outside the studio for him to come out, but because Sunday is Jets day and I am usually home or it's cold, I never went. 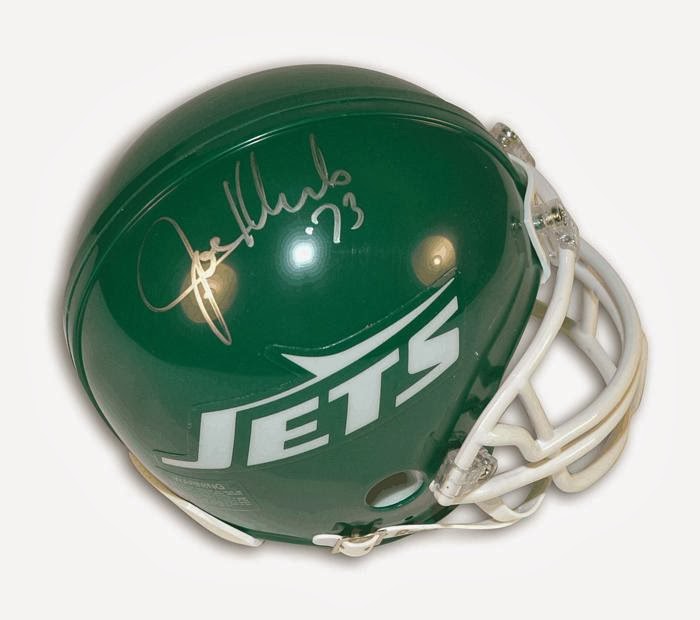 My favorite all time Yankee. Tino was intense, a fantastic glove and a great bat on those World Series clubs during the 90's and early 2000's. Another player who I have a PC of as well as a few signed certified cards and a mini helmet, I don't have a signed baseball from him. He's been my Moby Dick, very elusive. Each time he is scheduled to make an appearance I ether miss out for one reason or he winds up cancelling. My last chance was when I was in Los Angeles and he was still coaching the Marlins. I waited after the game for him to come out and sign but after about a half hour I wound u leaving with my girlfriend, who was a heck of a trooper for waiting. The next day, my buddy Dodger Bobble tells me he came out 10 minutes after I left and signed. I just can't win.

I want a signed ball to add to my Tino PC 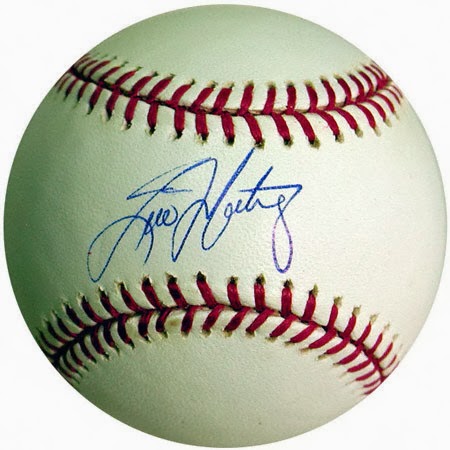 There are a lot of other players I would love to add to my collection. Hall of Fame players like Nolan Ryan, Cal Ripkin Jr or Sandy Koufax. Legends like Vin Scully, Teemu Selanne and Terry Bradshaw as well as players from my favorite teams like Bernie Williams, Walt Frazier, John Tavares and John Starks. I hope I can add all of these players to my collection at some point. I know it will take a lot of work and probably money, but  believe that if you work hard enough and want it bad enough, you can have anything you want in life. Lucky for me, my dreams are pretty simple. If I can get all of these signatures, I'll be a pretty happy guy.
Posted by Unknown at 3:53 PM