Before McFarlane's Sports Picks figures came out all of us sports fans were collectors of Kenner's Starting Lineup figures. These 4 inch figures that had no articulation what so ever and questionable likenesses to the players were ultra popular within the collecting community.

Except for me that is.

Let me explain. When Starting Lineup debuted in 1988, I was a junior in high school. I really wasn't doing much collecting at that point. I was too busy writing articles for the school paper, memorizing lines for the school plays and singing for the school choir. Toys? I had no time to collect. Heck, I barely had time for actual classes, but that's another story for another time.

I had friends who had some and I thought they were pretty cool. My buddy had all the Yankee releases and I thought that one day I would start picking them up, but that day never really came. All the money I made working went to other things. CD's, movie tickets, clothes, lunch money. I didn't ever think about spending any of my green backs on action figures. At this point, I had even given up collecting cards.

Fast forward about 15 years later. At this point, I am back into collecting cards and I also had started picking up McFarlane's Sports Picks. I was grabbing as many Yankee players as I could as well as Jets. So, it was just a matter of time before I would look towards the past and look into Starting Lineup figures for my Yankees collection. I would pick up a couple here and there, but I never really got too into them.

At one card show in White Plains, I came a cross a table that was selling various items for $5.00 and under. After looking through it, I came across 2 large Starting Lineup figures that featured Mickey Mantle and Babe Ruth. I was intrigued by them and paid the man 10.00 for the pair and took them home. I then put them away and they have been in my closet for about 7 years. I found them the other day and bought them out, figuring I could put up a blog post about them. 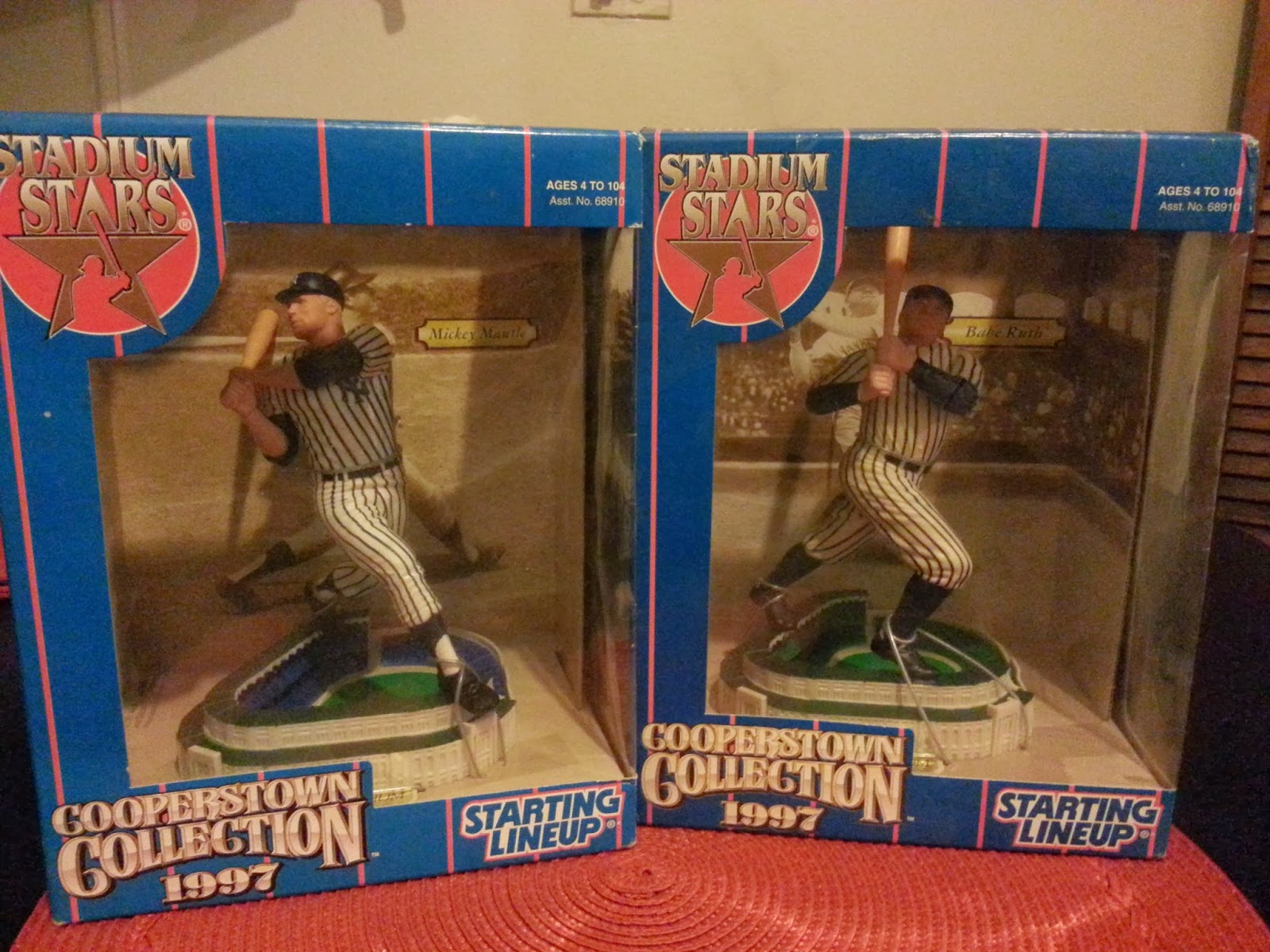 I picked up these figures for a few reasons. I liked that these figures were larger then the usual Starting Lineup figures. I also loved that the bases for the figures was plastic molds of the original Yankee Stadium. That was something I had not seen at that point and that to me was the selling point. 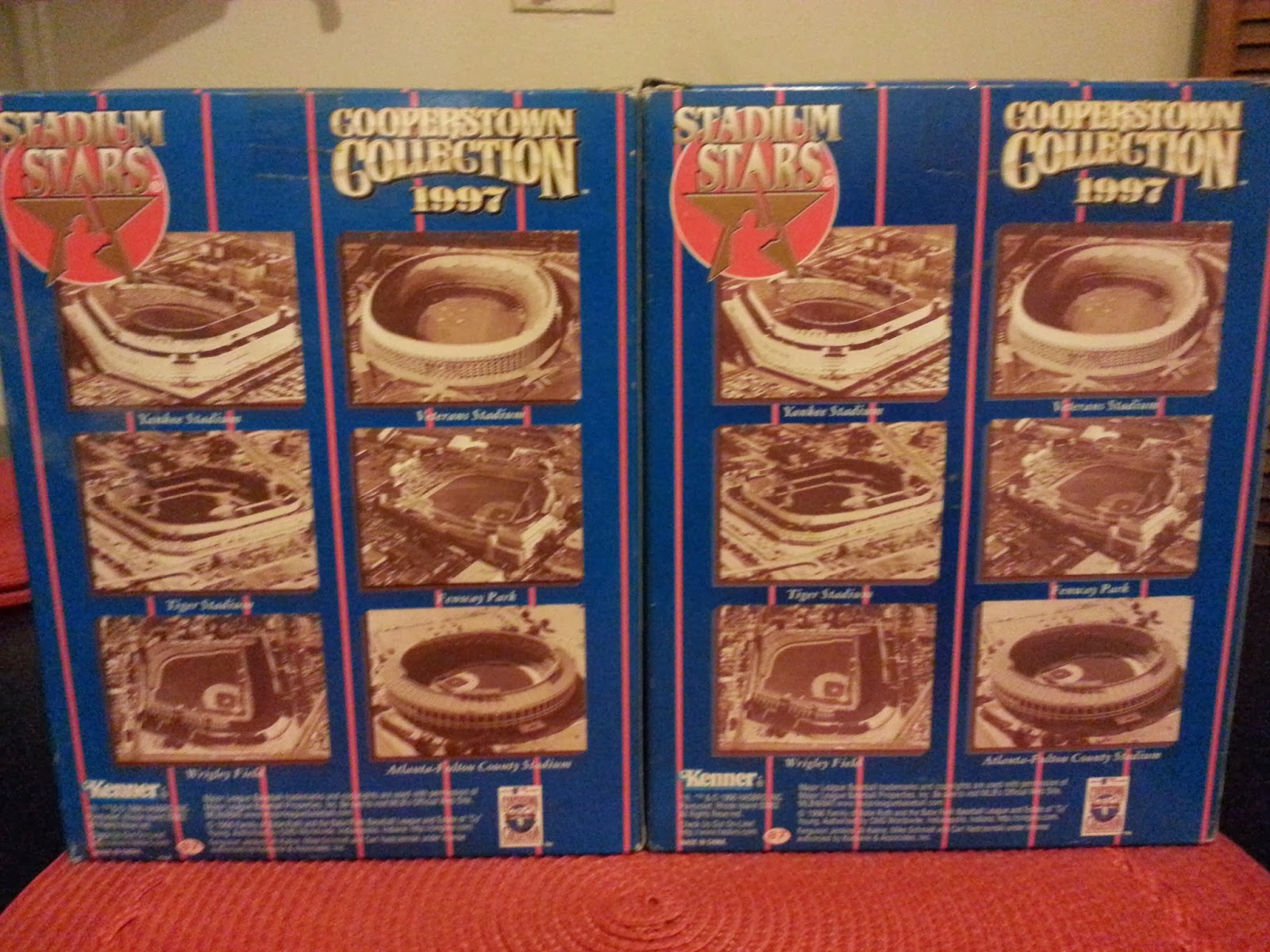 The back of the packages has vintage shots of all the stadiums featured in this series. Only two stadiums that was in this series are still standing today. If you guessed Fenway and Wrigley, then you win absolutely nothing! 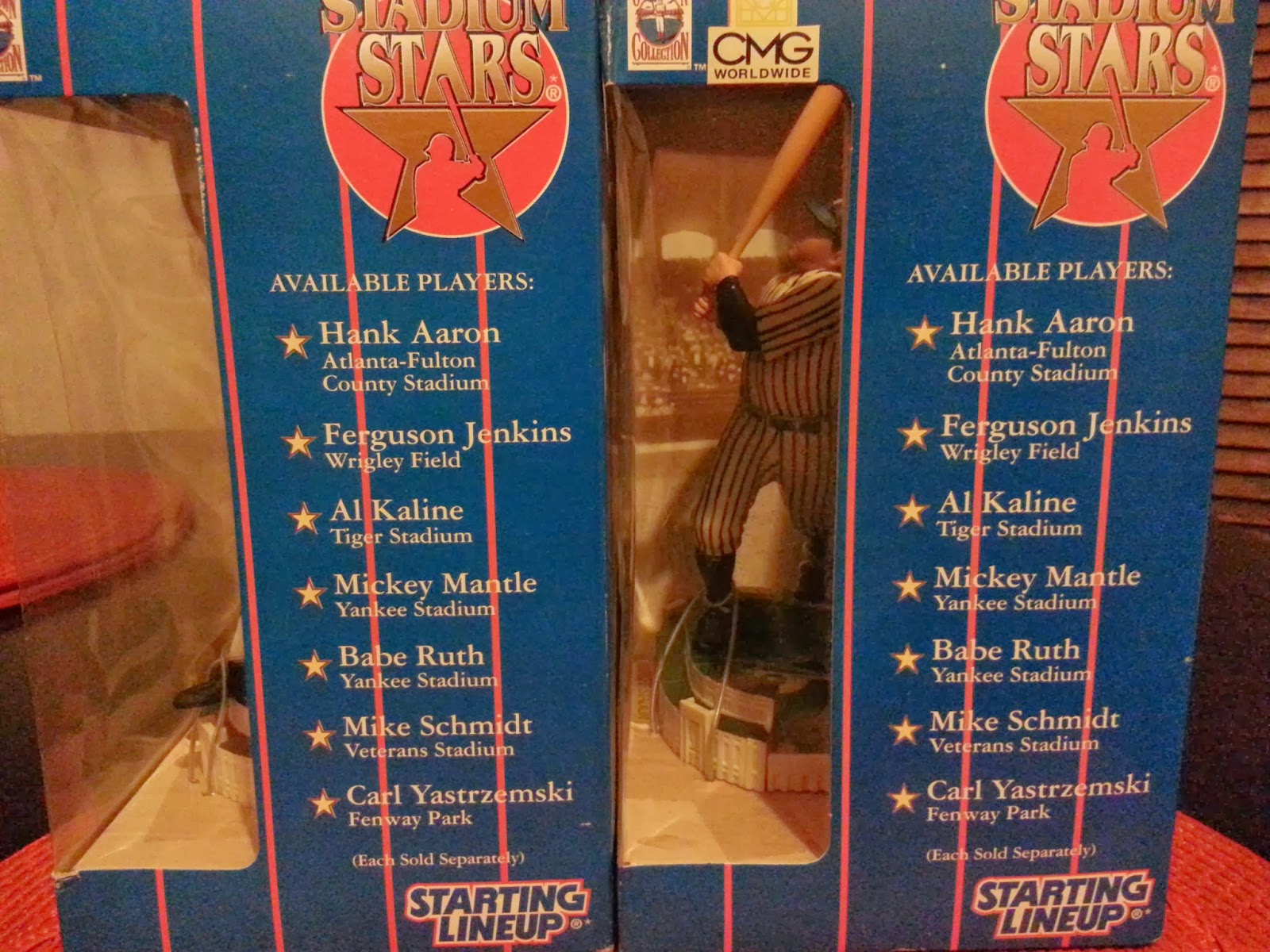 Kenner listed the players in this series on one side of the box. All of these players are Hall Of Famers and I would think a must for any Hall Of Fame/team/player collector. 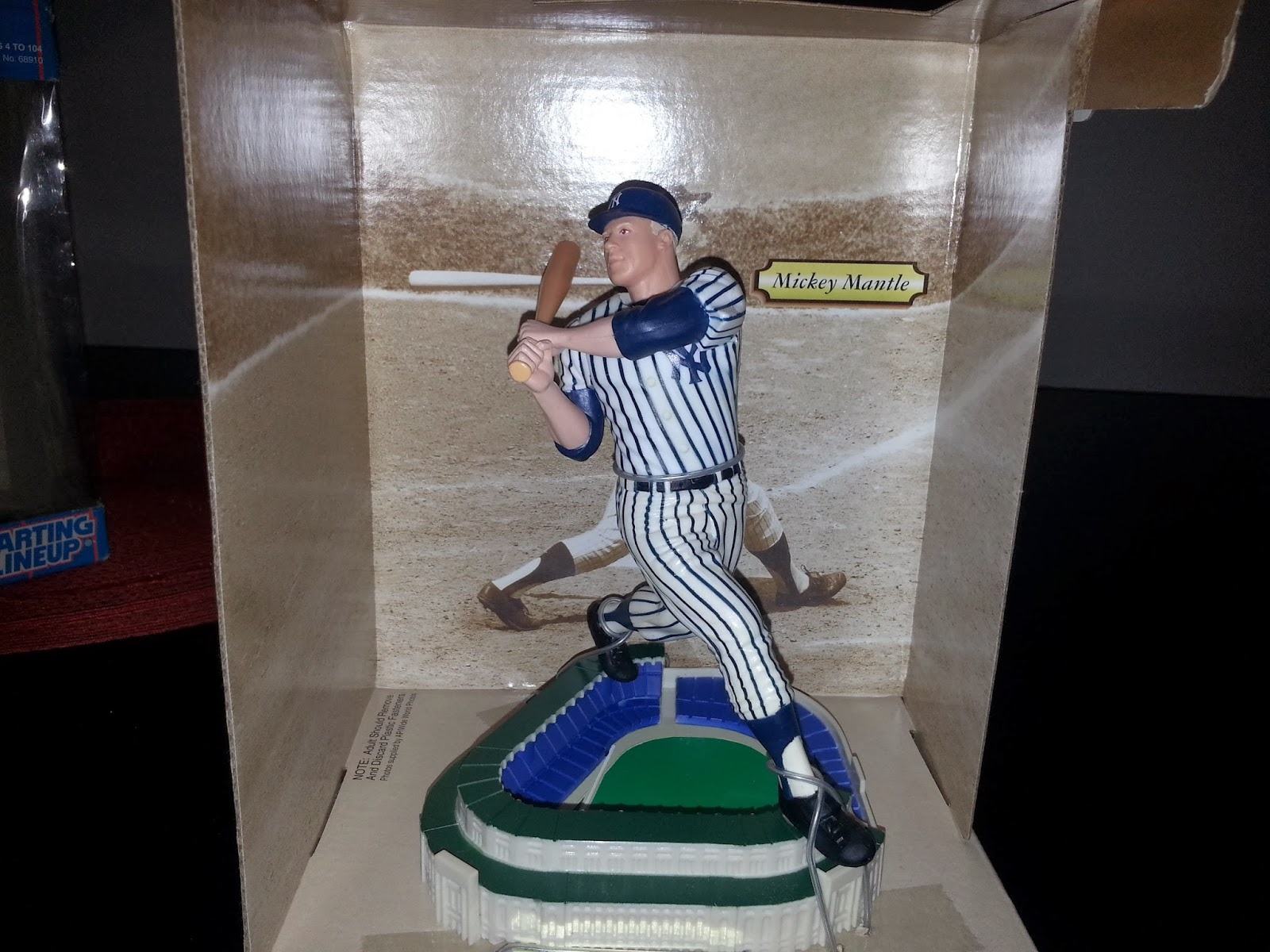 I opened the Mantle first. This would be the first time I would be opening these figures. I wondered at first if I should be doing that, but I'm an opener and a firm believer that toys must be opened in order to truly enjoy them. Once I pulled the Mantle from out of the box, I noticed the backing had a shot of Mantle behind the figure. Then of course, I forgot to take pictures of the backing. Trust me, it was a nice shot of Mickey. 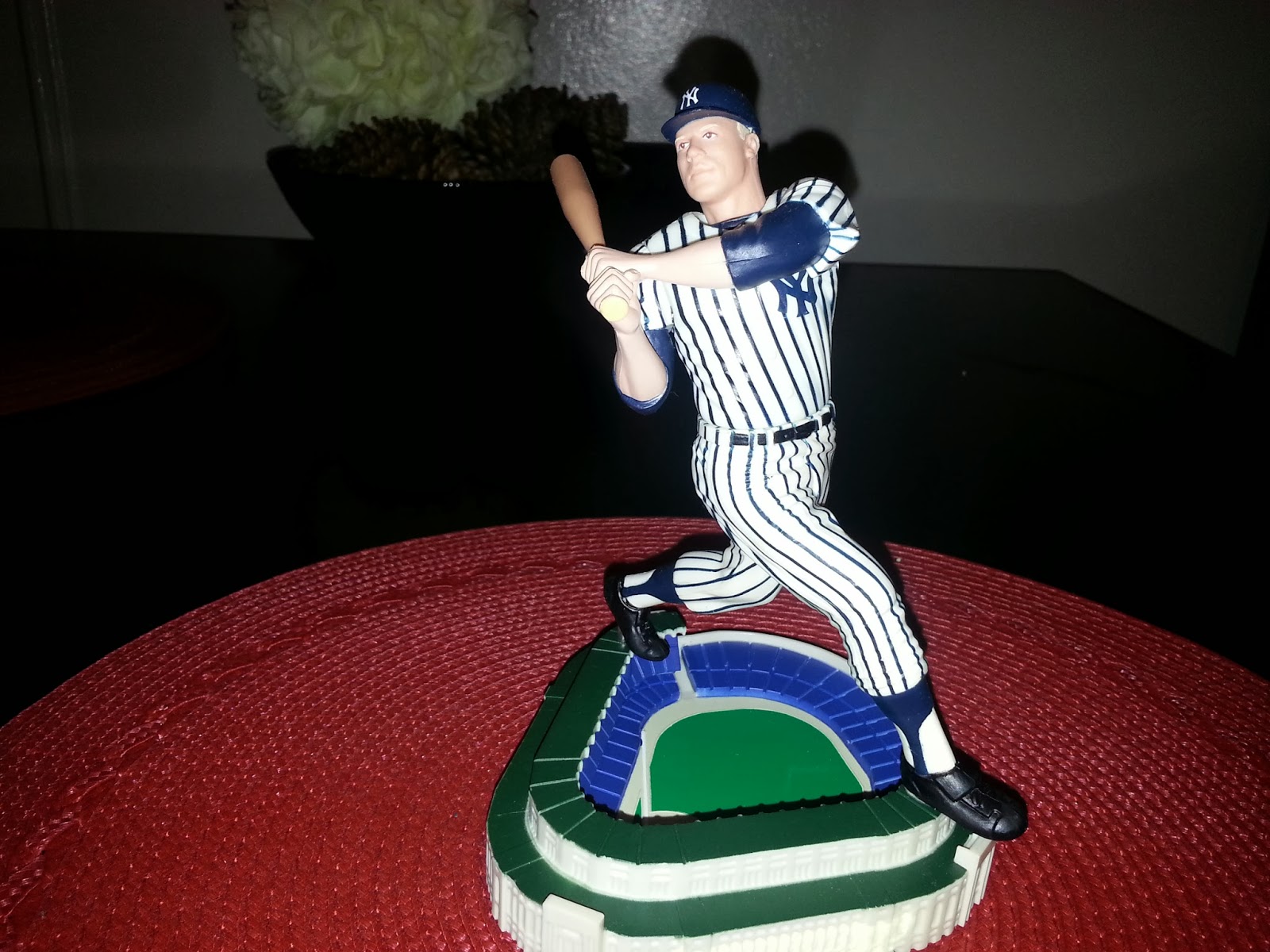 After struggling with the multiple twist ties that held the figure firmly in the box, I was able to pull Mantle off the backing. Looking at it, I was actually impressed with it. The figure itself is pretty simple in it's beauty. The figure is made of hard plastic with everything painted on. The stadium was made of a thinner plastic, but still solid nonetheless. 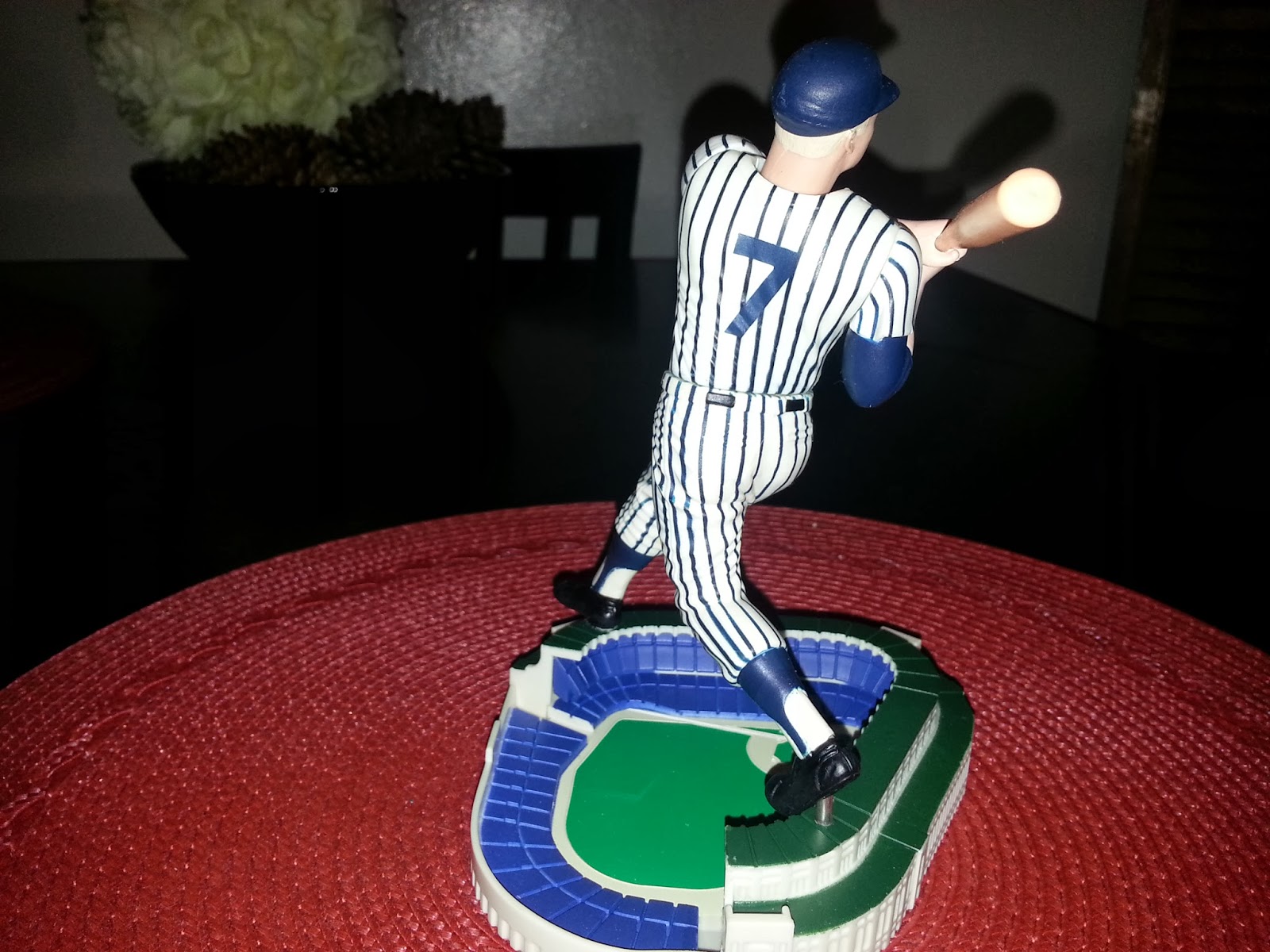 The paint job on this figure is pretty accurate to how the uniform looked when Mantle played. That was very important to me. Starting Lineup always did a pretty decent job of recreating the uniforms of different eras. 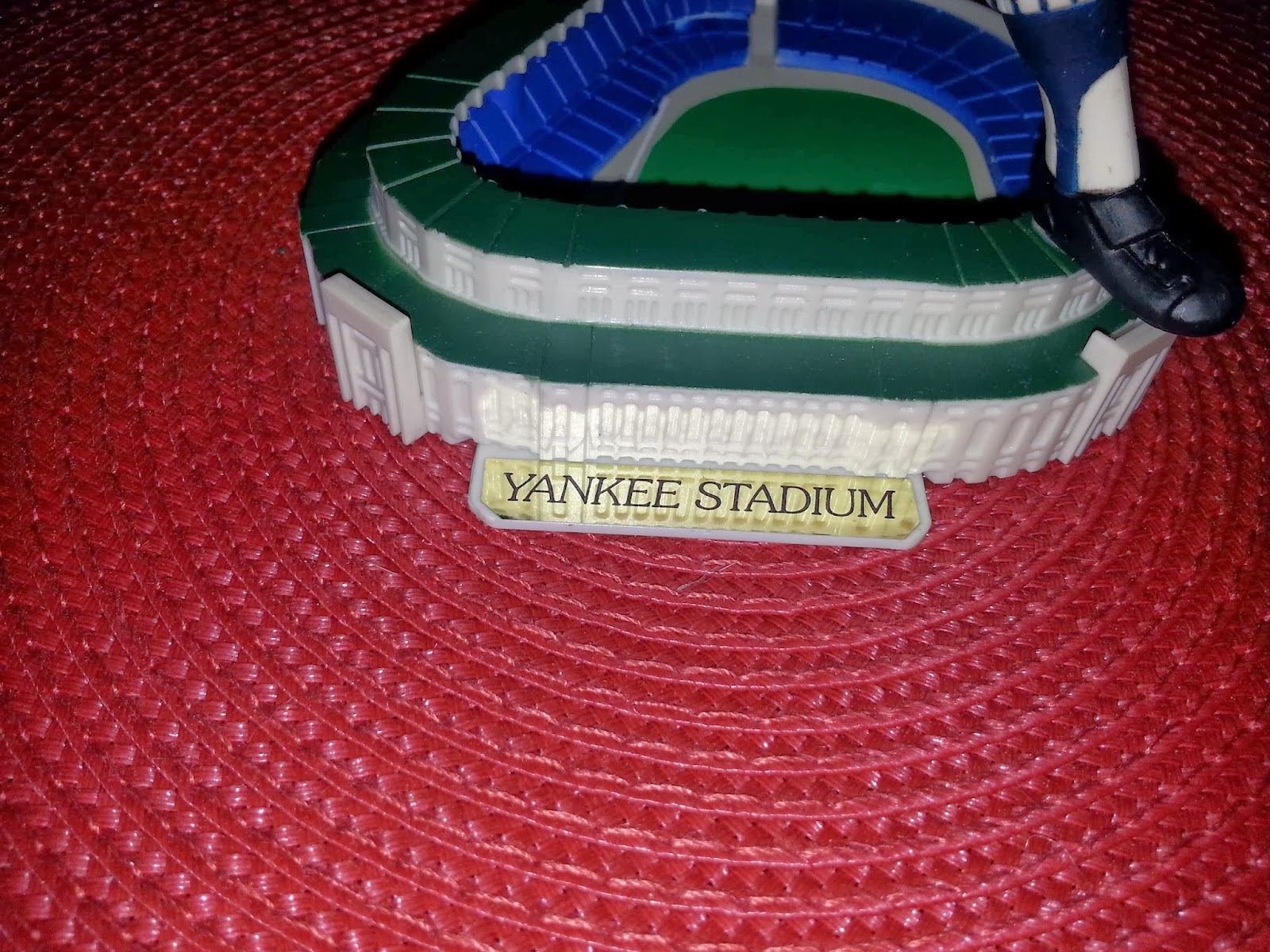 The Yankee Stadium base is very charming. The detail Kenner put into to it is simple, but effective, Not a ton of painting on it except for the green roofs, green grass and blue seats. I'm sure the stadium was molded in the stone color you see and the rest was painted in. Love the tab that let's you know that is indeed Yankee Stadium. 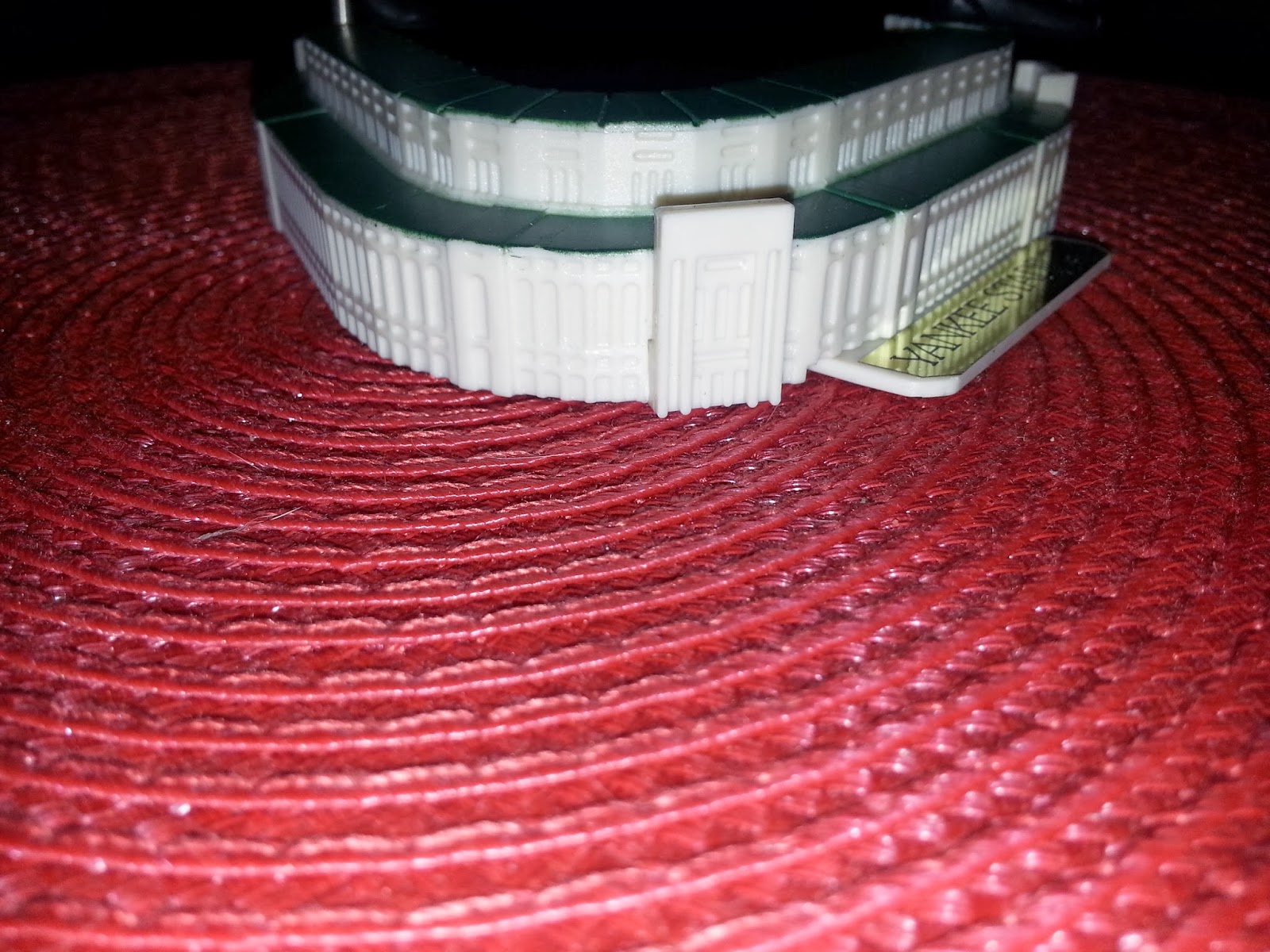 Some other shots of the stadium base it's self. 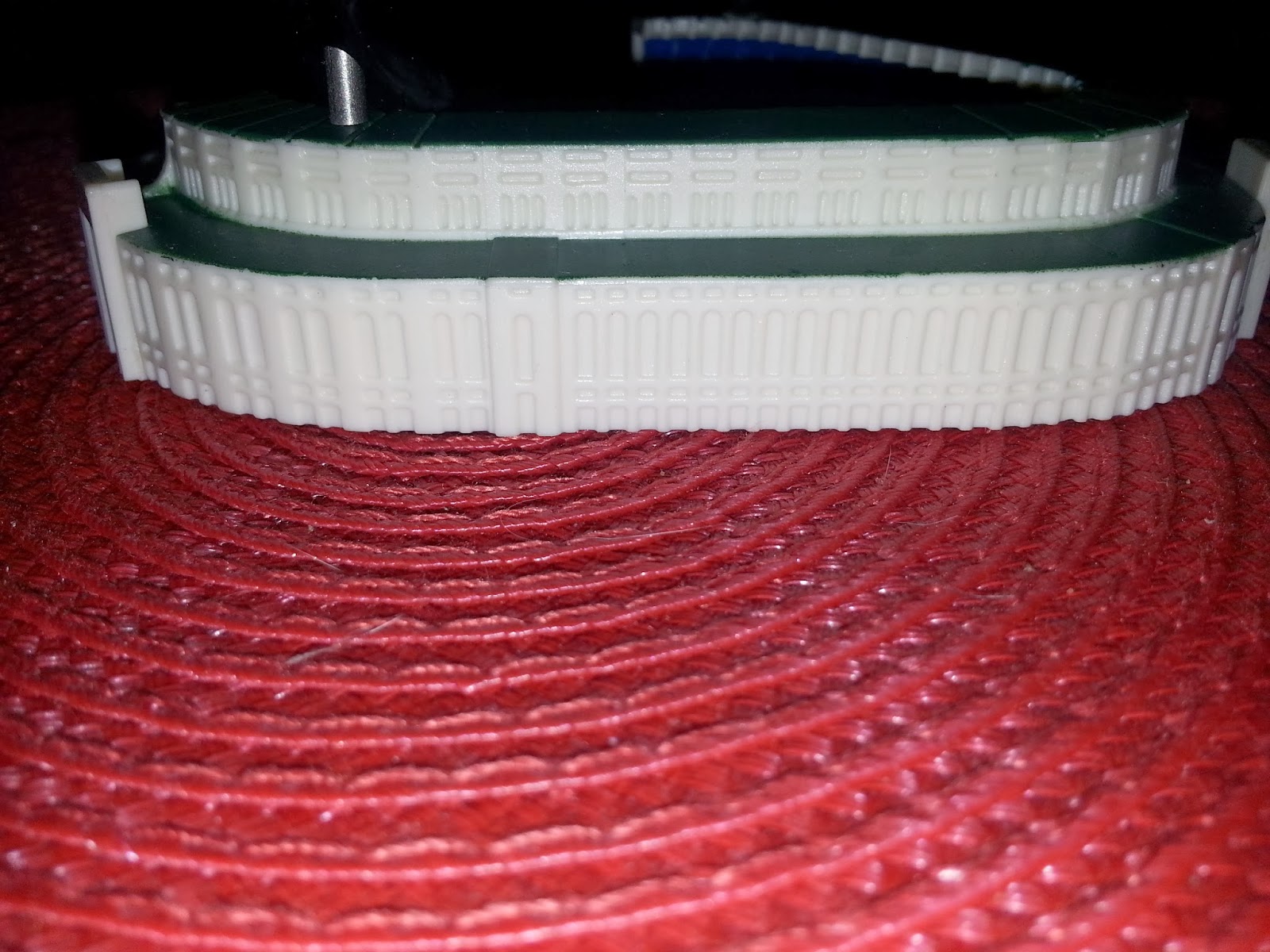 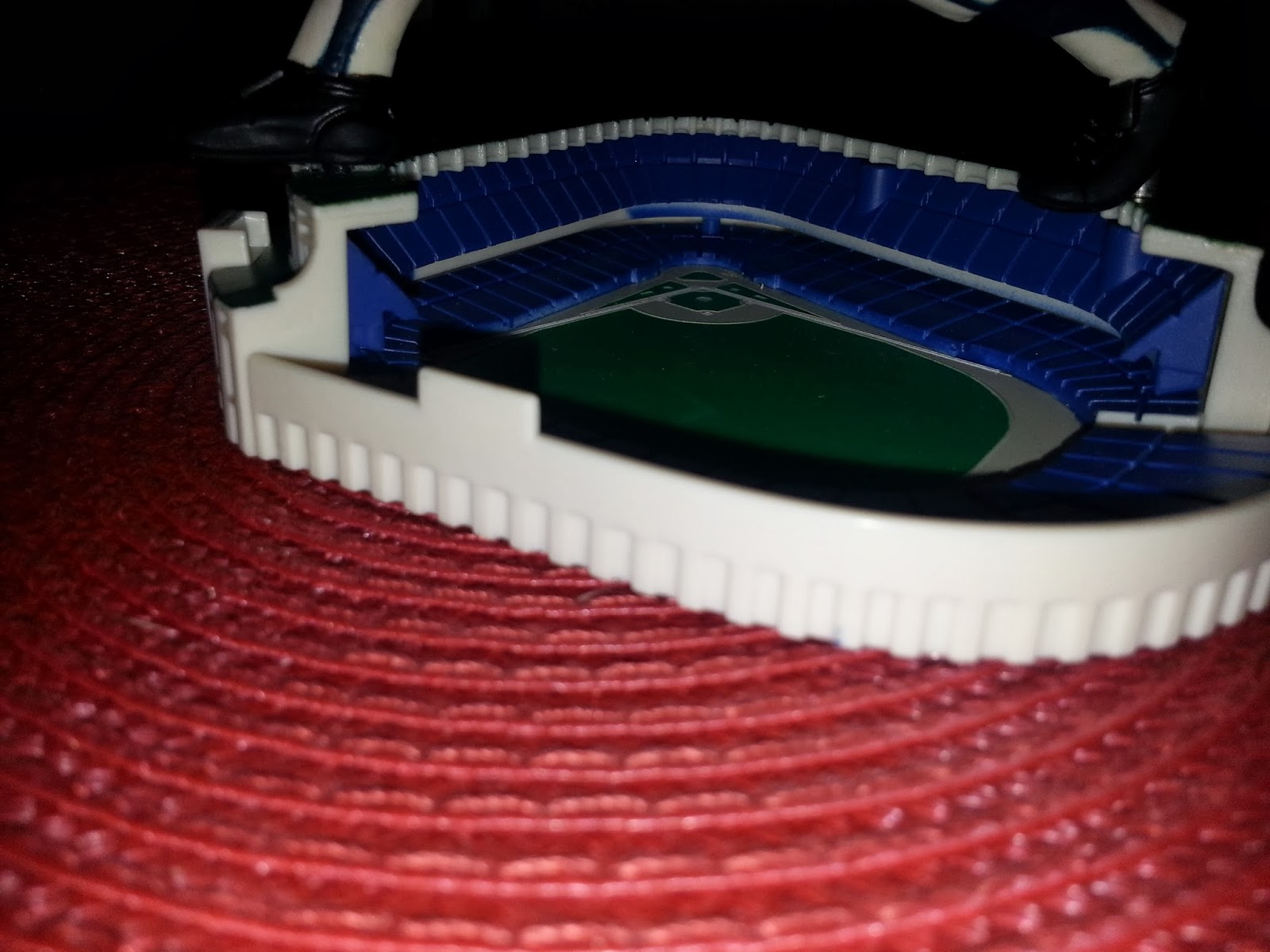 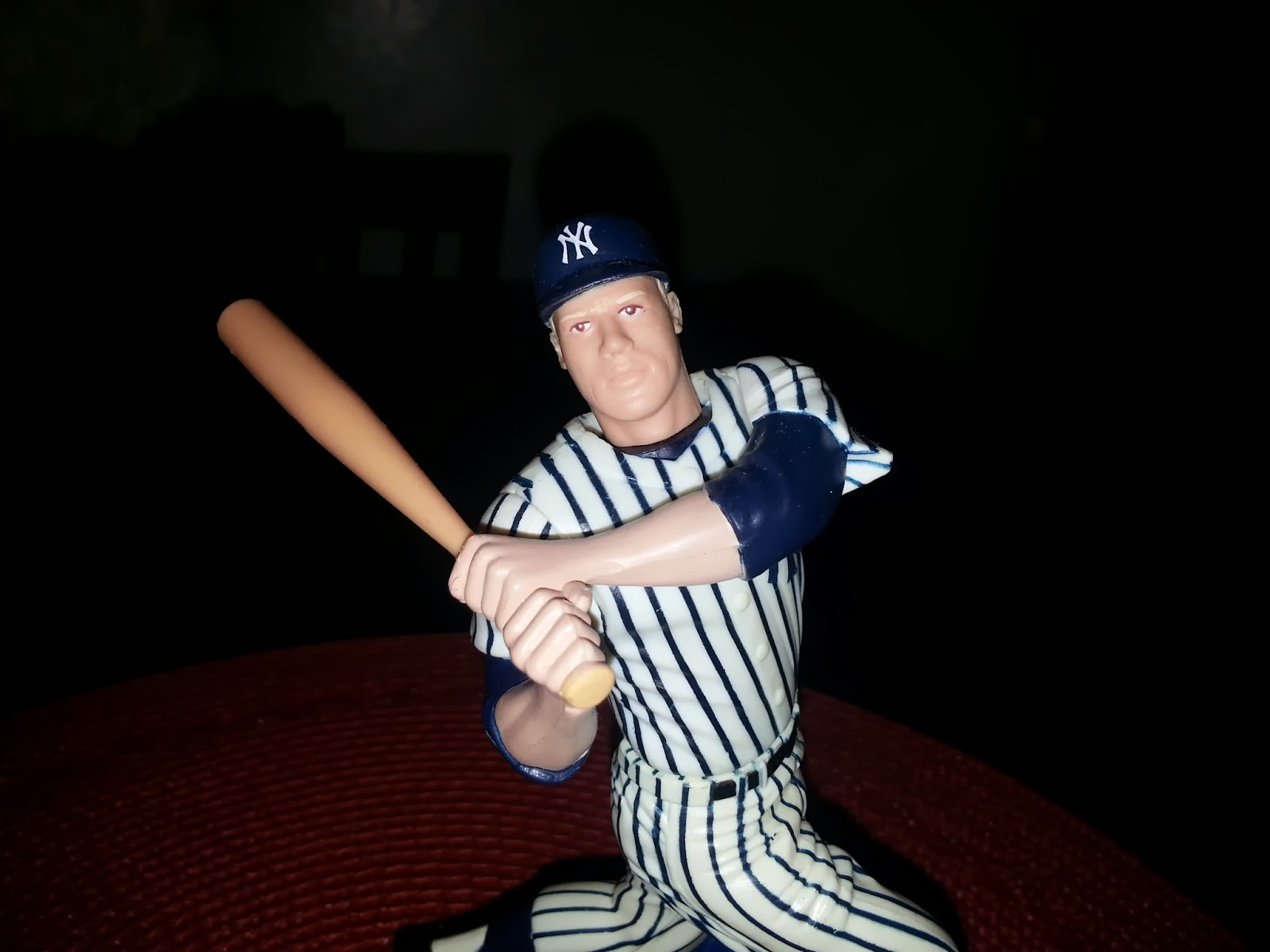 Let's take a look at the Babe. 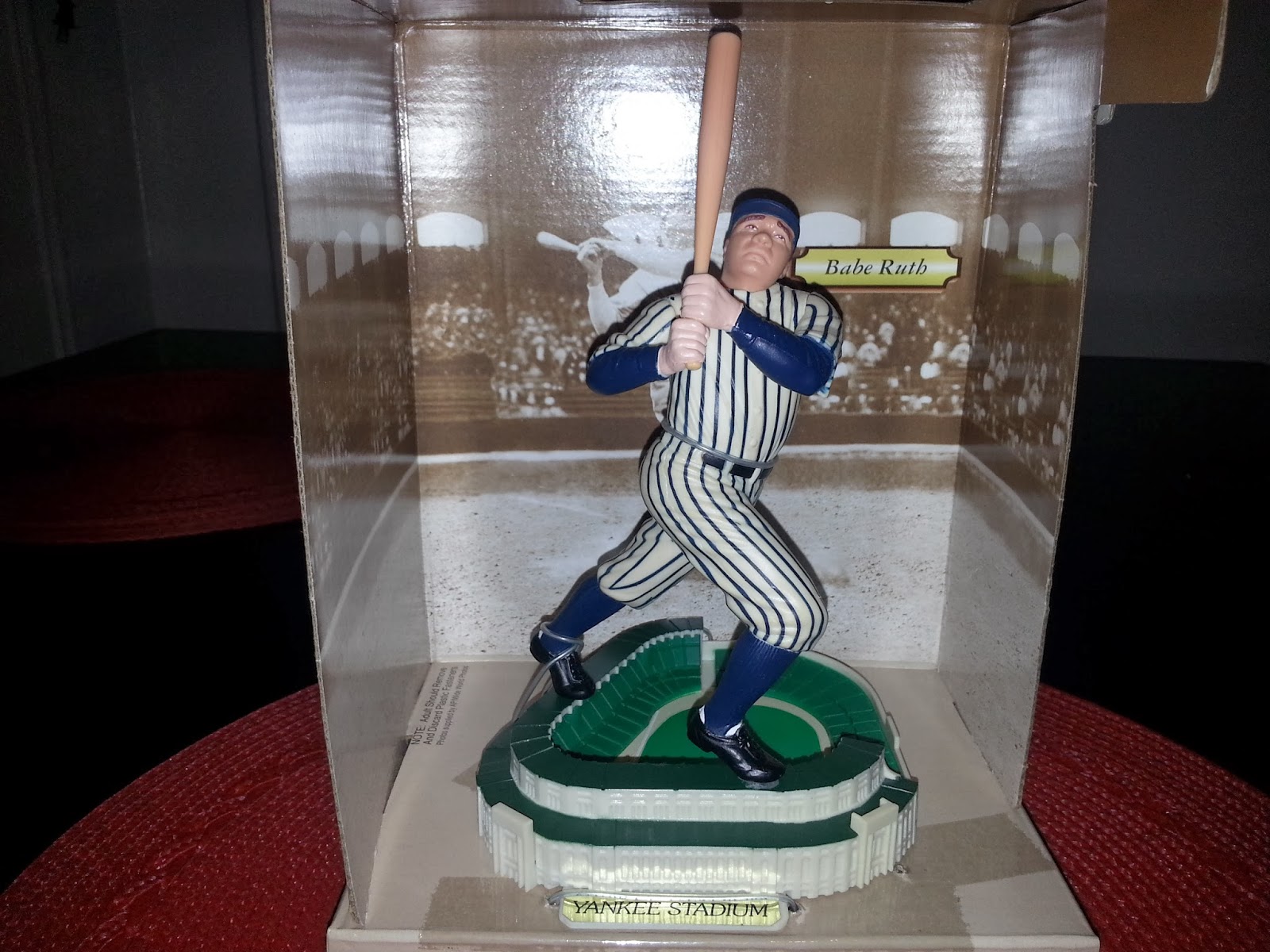 Same concept that the Mantle figure had. Twist tied to the backing board which featured a picture of Babe Ruth at the plate. 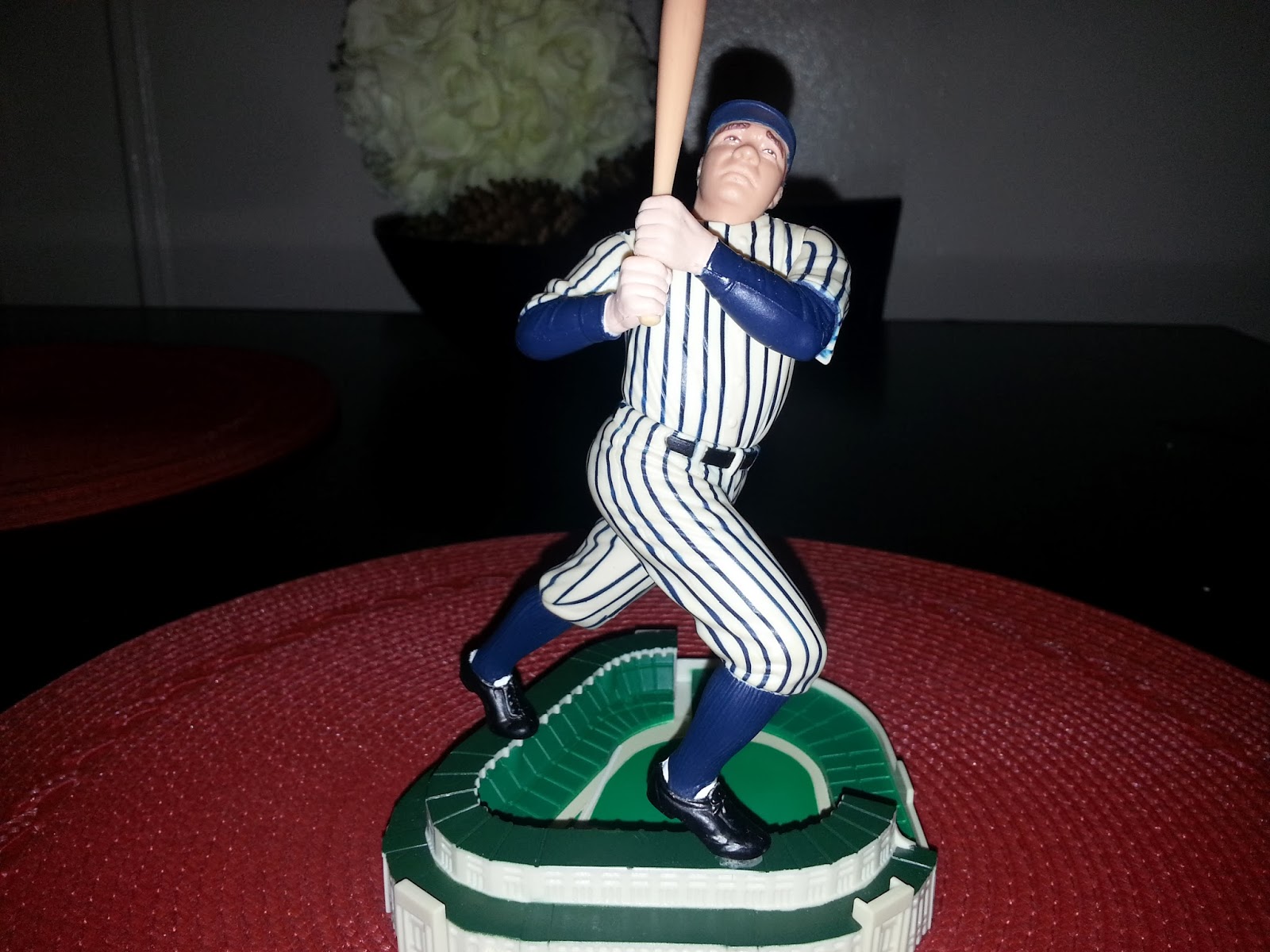 Again, Kenner nailed the uniform. Even right down to not having the interlocking NY on his jersey. I have seen a lot of Ruth figures that made the mistake of including it when in fact, Ruth never wore that version of the Yankee uniform, professionally. The team didn't start using the interlocking NY until 1936 and Ruth left the club in 1934. Ruth did wear it once or twice when he returned to Yankee Stadium for appearances after he retired. 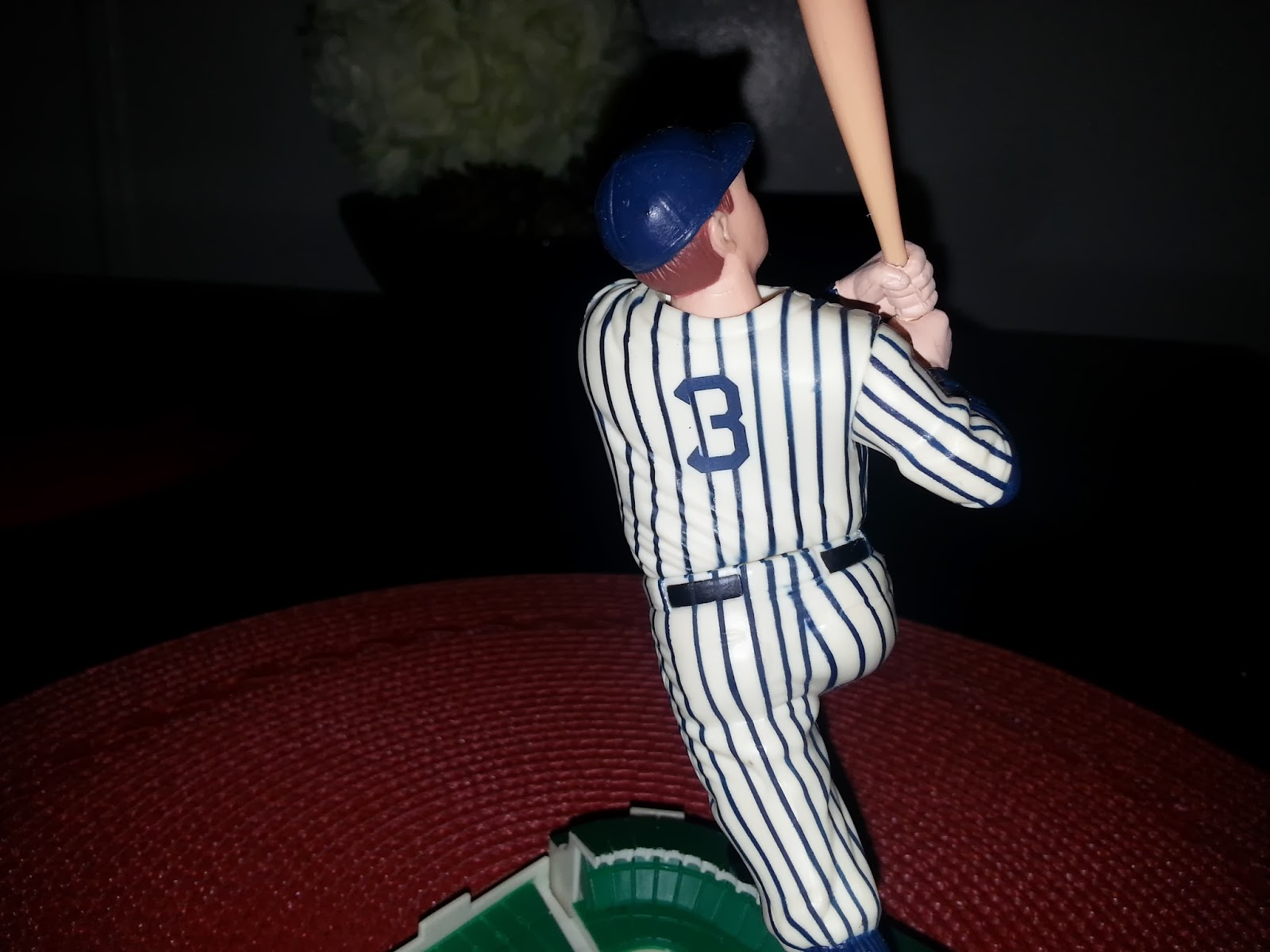 That number is iconic. I have never understood why it's not retired throughout baseball. Ruth saved the game single handed after the Black Sox scandal. He bought in unforeseen revenue to both the Yankees and baseball. Crowds from all over would pack their teams stadiums when the Yankees were in town, just to see the Babe. To this day, people talk about Babe Ruth and the name still carries a lot of weight .

I decided not to take pictures of the Yankee Stadium base as it's the exact same one as the Mantle base. 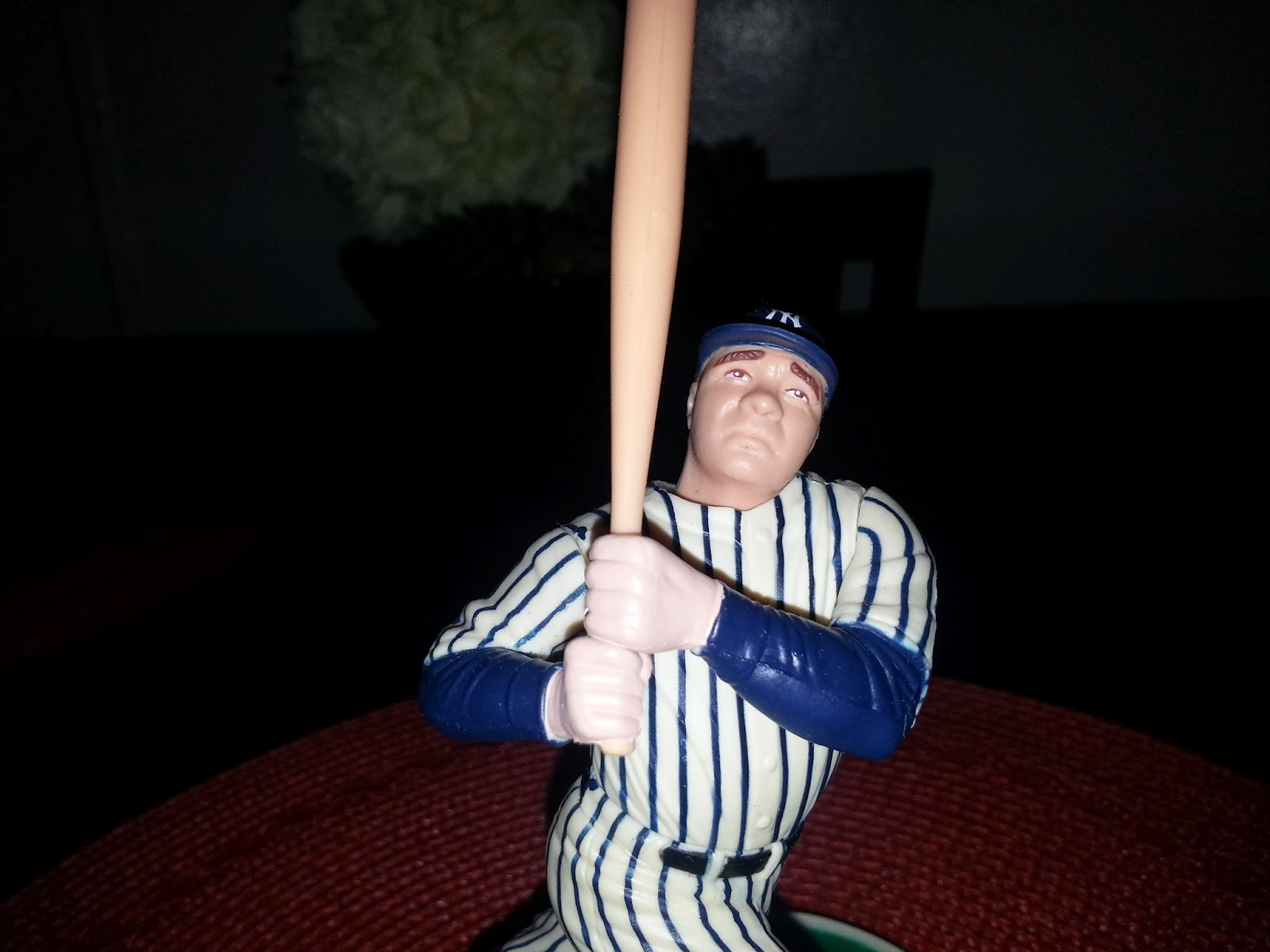 Kenner did a decent job of getting the likeness. I mean, if you saw this figure, you would think it's a Ruth. Not the greatest, but it gets the job done.

I think these are two fun pieces to have in any baseball collection. They were different than most of the other figures Starting Lineup put out. I'm not sure if they were successful or not as I don't see any others made other than the series shown on the side of the box. If you're interested in picking these or any of the others, I have seen them on eBay go for fairly cheap. I do have a few other Starting Lineup figures I'll show from time to time, but I can honestly say that these two are my favorites and I can't wait until I can display them with my Yankees collection.
Posted by Unknown at 11:28 AM