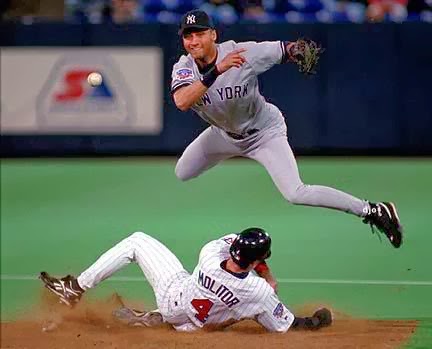 By now, you all know that Derek Jeter announced that the upcoming 2014 season will be his last. He suffered more injuries the past few seasons, his fielding has regressed and he will be 40 years old this season. I did think this would be his last season, but I'm still a bit shocked at the news. Just because Jeter was going to be 40, I always believed that he would rebound. It would not have shocked me if he batted around .290 and had over 200 base hits as he usually does. I still think he will have those kind of numbers. Maybe I have been a bit spoiled, can you blame me? Jeter has been putting up these numbers year in and year out.

What has always gotten my goat is how all the Yankee haters would say things like "If Jeter played in Kansas City, no one would know him." I have always believed that was an insult to Kansas City, plus you are just selling the man short. Jeter has played in 13 All Star Games, has won 5 Gold Gloves and 5 Silver Slugger Awards. He was the Rookie Of The Year in 1996 and was the first player to win MVP of both the All Star Game and World Series. Oh yes, he has 5 World Series rings. How many players are around that has that much hardware? Not a lot, if any.

Like Rivera, Jeter is going to be one of those future first ballot Hall Of Fame players I can say I may have seen about 95% of his games played. I have seen his first hit in 1995 against the Mariners, saw his first home run against the Indians in 1996. I watched dive into stands, become Mr. November, save a playoff game with "The Flip", kill the Mets in the 2000 World Series, become the all time Yankees hit leader, then score his 3,000th hit in Boggs-like fashion with a home run off David Price. Overrated? Yeah, sure he was.

What I'm going to do, from time to time, is show off various Derek Jeter items in my Yankees collection through out the year. Over the years, I have accumulated some nice Jeter pieces. From inserts to game used. From figures to bobbleheads and so forth.

Today, I am going to show off my Jeter autographs. I have yet to be lucky enough to score a signed baseball, picture or bat. My autographed Jeter items are certified cards I have either pulled or bought and I am extremely proud to have these signatures in my Yankees collection and I will never give these up. 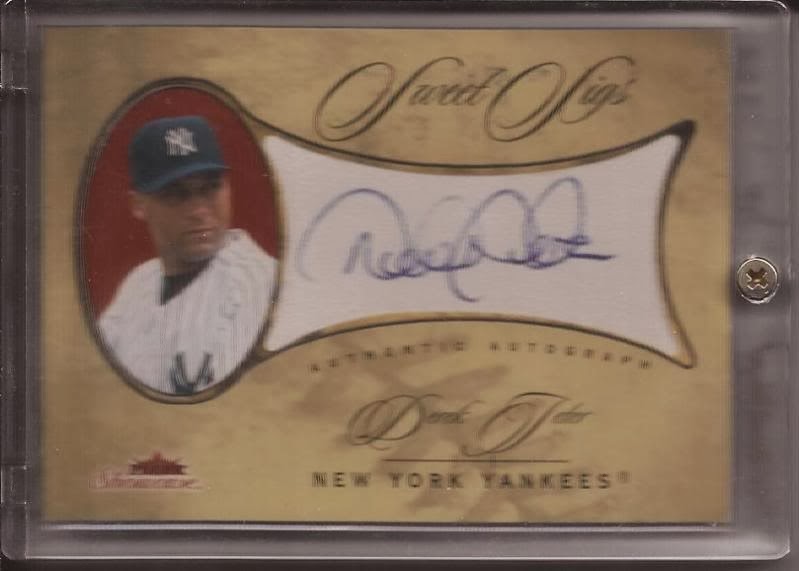 This was my first Derek Jeter autograph and the only Jeter autograph I paid for. This was bought at the White Plains Sports Card show back in either 2005 or 2006. I had wanted a Jeter autograph for sometime and I had some extra money to play with. I do remember I went into that show determined to pick up a Jeter autograph. After comparing prices, I settled on this card. I got a deal on it, paying $75.00 after getting it down from $100.00. 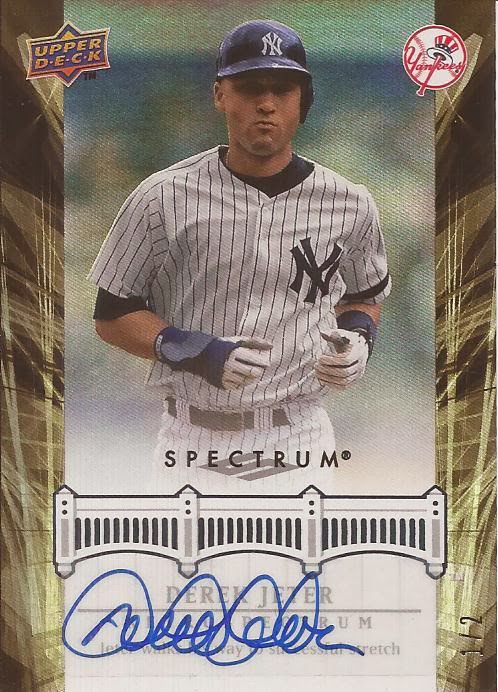 This was the first Jeter auto I pulled, or should I say, had pulled for me. This was part of a group break with my team collectors group. I actually missed this pull and when I went logged on in the middle of the break and asked if I missed anything it was met with a somewhat sarcastic no, I didn't. Guess I shouldn't have been late. 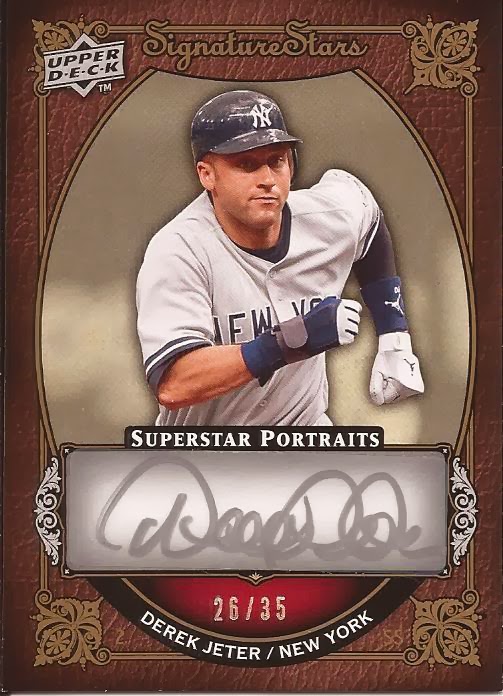 This Jeter autograph was also pulled during one of the Team Collector group breaks. This time, I got to see the pull. Needless to say, I've been pretty lucky in the group breaks, as far as Jeter pulls goes. I wish he didn't sign this in silver ink though. A darker color would have stood out better, in my opinion. Still, I am proud to own it.

I'll probably show a different Jeter item once a week until I have nothing left to show or when his career ends, whichever comes first. With the amount of Jeter cards I own, I could probably show off one card a week for the next couple of seasons. Going forward, I'll probably just show one Jeter item per blog, just to make sure I have something to show.

Now that Jeter announced his retirement, the 2014 Yankees season will be a season you won't want to miss. Yes, the Yankees added players like Beltran, McCann, Tanaka and Elsbury. But we will all be focusing more on Derek Jeter than any of those stars, as it should be. I wouldn't be surprised if the Yankees win it all in Jeter's final season. Don't laugh, it could happen.
Posted by Unknown at 10:11 PM