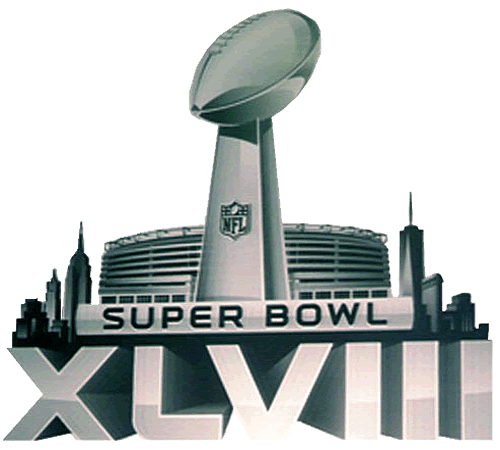 Since I had a great time during day one of the Super Bowl festivities, I made sure I went back for day 2. Thankfully, it wasn't as cold as it was on Tuesday. Wednesday's high temperature was 25 as opposed to 17 the day before. I cannot wait until Spring.

My day started later than the previous day. I learned that Brian Cushing and Mo Wilkerson was signing at Body Armour's exhibit in Grand Cenral Station. It was a football lesson for some kids with Play 90. LaVarr Arrington was the "moderator" of the event and was the main instructor. Arrington needs to get a TV job. He has personality and quick wit.


The autograph signing was scheduled for 12 noon, but as the time got closer, the lessons weren't slowing down. Then around 12:20, someone came by and told one of the workers that Cushing had to leave. Once Cushing left, so did Wilkerson. I thought my chance to get Mo to sign my Jets book had come and gone until I saw Cushing standing around and talking to a few gentlemen, so I hung around and waited. Sure enough, Wilkerson came out and I got him to sign my Jets book.


While we were waiting, someone told us that Victor Cruz would be signing at Footlocker, so we headed there after lunch. When we got there, the line was pretty long. Having gone to previous signings at Footlocker, I had a feeling that the line would move quickly once Cruz arrived and we would get to meet him.

As I suspected, once Cruz arrived, the line moved pretty quick and within 25 minutes we were inside meeting Cruz. Btw, never let a store employee take your picture while your meeting with an athlete. The picture always comes out wrong. For the sake of my very small ego, I will resist showing you the picture that was taken. I will show off the picture I got signed.

After this signing, we went to get in line for Jim Brown at Macy's and the day went downhill from there. Once we got there, we were told that Brown would only sign merchandise that was bought at Macy's and you had to spend $50.00 to get the signature. OK, I wasn't going to argue it. So, I bought an NFL mini helmet for Brown to sign and a Jets mini for later use.

As I got to the front of the line, I started getting the mini helmet ready to be signed. As I did this, a Macy's rep came up to me and told me that Brown will not be signing anything other than the pictures that were provided up front. This infuriated me. I spent $60.00 on overpriced mini helmets to get this guys autograph because I was told by Macy's that I had to spend over $50.00 to get the signature. What was worse was when I got upfront Brown didn't even look at me. His representative handed me the photo. That made me even more angry. If your going to tic off the fans who waited 3 and a half hours for you, have the courtesy to look up, say hi and shake a hand or two.

Once I left the signing area, I made a beeline for the register to return the helmets. I wasn't the only one as the lines at the registers grew to amazing proportions. Once I got to the register, a rep from the NFL Team Store told me that it wasn't Macy's nor was it Jim Brown that ixnayed the signing of merchandise. It was his representative that me the signed photo with Macy's all over it. She saw how ticked I was. Couldn't have explained why she wouldn't allow Brown to sign merchandise that was bought specifically for this event? I still blame Macy's for allowing that to happen. He was paid to be there. Macy's should have enforced that rule. They just wanted 100 fans to spend $50.00 and more at their store.

What's worse, even after being lied to, a Macy's representative tried to take back the signed photo. I refused to give it back since three people where in front of me and walked off with their photos after returning their merchandise. The rep let me go, but told the guy at the register I was the last one. Morel of this story, Macy's sucks and I won't go back for another signing again.

Because the Brown debacle took forever, we got to Modell's for the Jamal Charles signing too late. The line was too long and we were told by a Modell's employee that the first 100 were guaranteed an autograph. I was willing to stay to attempt to get the taste of that Brown signing out of my mouth, but my friend wanted to go, so we left and the day ended on a sour note.

I started Friday at an early hour. I was going for just 2 autographs. Dee Milner was signing at Modell's at 12 noon and I wanted to add the Jets CB to my Jets collection. But the reason I got to Manhattan so early was because I had heard that Yankees pitcher CC Sabathia was going to be appearing on an ESPN show, so I got to Bryant Park around 10am. CC arrived around 10:15am and was walked in by security pretty far away from where the graphers were standing. I waited around and saw Cam Newton being led out the same way CC was led in; far away from us. CC came out around 11am and when I saw he was walking in the same direction I bolted from my area up front. I ran from one corner to another and slowed down to a brisk walk so that I didn't have a cop jump in front of CC thinking I was a wack job, but also because I left my lung on the sidewalk behind me. I'm too old to be running as fast as I did.

Once I got to where CC was, I saw that there was no graphers around. Just CC, a cop, his entourage and little ole me. I politely asked CC if he could sign my ball and he said sure and took my baseball. As he waited for me to give him a pen and I went into my bag to get one, I realized after fumbling around that I forgot my Bick pen at home. I embarrassingly asked one of his people if they had one and thankfully, someone had one. I shook CC's hand and wished him luck this upcoming season. Thanks to my almost killing myself, I was able to walk off with this gem: 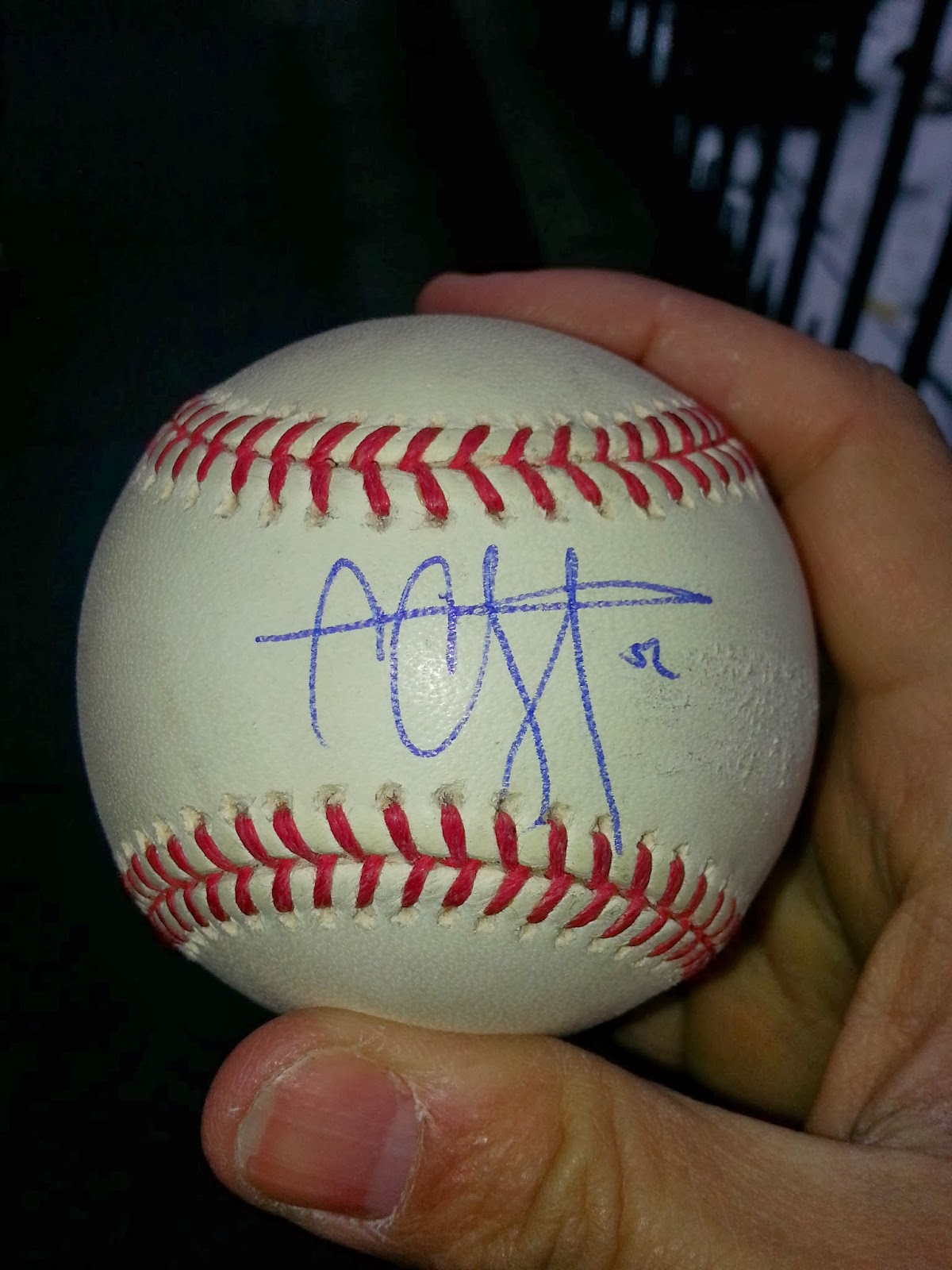 After that, I headed over to Modell's, hoping that the line wasn't too long. When I got there, I saw there was no line. "Lucky Me", I thought. I went inside and asked an employee when the line would start and was told that the Milner signing was cancelled. As disappointed as I was, getting CC to sign the baseball for me was enough for me and decided to end the day.

I did walk along Super Bowl Blvd and took some pictures for you guys to check out.

Well, I had a great time running around getting some autographs for my collection and experiencing all the hoopla surrounding the week leading up to the Super Bowl. I realize that this might have been a once in a lifetime event here in NYC and I made sure I made the most of it. My only complaint was that this should have been held in doors. I don't understand why it wasn't held at the Javitz Convention Center. With the weather as cold as it was, it should have been held indoors. That said, I'm glad I was able to attend this event and I hope that I can do so again one day. If you have the chance to attend when the Super Bowl is in your town, I urge you to go out and attend it. You won't regret it.
Posted by Unknown at 6:35 PM