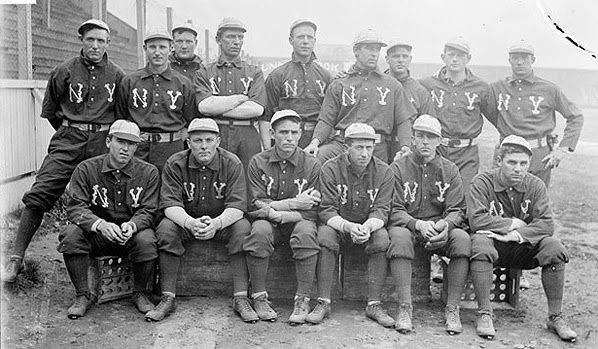 As a bobblehead collector, I am always looking for items to add to my collection that will make it stand out. Due to my current financial situation, I cannot get some of the older bobbleheads I'd like to add, but every now and then I came across something that just makes me want to have it.

Not too long ago, I came across a bobblehead on mlb.com that I had never seen before. Forever came out with bobbleheads of various teams in their classic treads. Now, as a Yankees fan, I know our uniforms have pretty much stayed the same since 1936 when the classic combination of pinstripes and interlocking NY came together for good. So, whatever classic uniform Forever used would have to come before then or not use any at all. 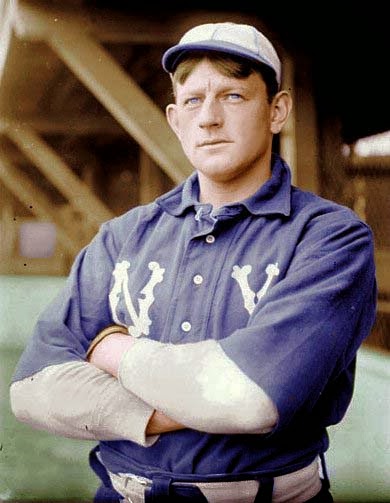 Forever released a bobblehead of a generic player in a 1904 New York Highlanders road uniform. To my knowledge, it's the first time a Highlanders bobblehead has been released. As you can see from the our model, Highlanders pitcher Jack Chesboro, the uniform is very different from the ones the Yankees would ultimately wear. There's no road greys, no navy blue lettering or even numbers. Back in 1904, the Highlanders sported a blue collared shirt (yes, I did say collared) with buttons that ran halfway down and the sleeves were half sleeves.

In 1904, the Highlanders were in their second of existence were managed by Clark Griffith, who would go on to manage, then own the Washington Senators until his death in 1955. That year, the team featured players like Wee Willie Keller, who hit .343, Jack Powell, who went 23-19 with a 2.44 ERA and struck out 22 batters and Jack Chesboro who went an amazing 41-12 with a 1.82 ERA and struck out 239 batters. Chesboro's 41 records is still an American League record for wins in a single season by a starting pitcher. The Highlanders were in the pennant race all season, but lost the race on the final game of the season when Chesboro threw a wild pitch allowing the winning run to score and giving the pennant to the Boston Americans, who would later go on to become the Red Sox. The Highlanders would finish in second with a record of 92-59.

Enough of the history lesson. Let's check out the bobblehead. 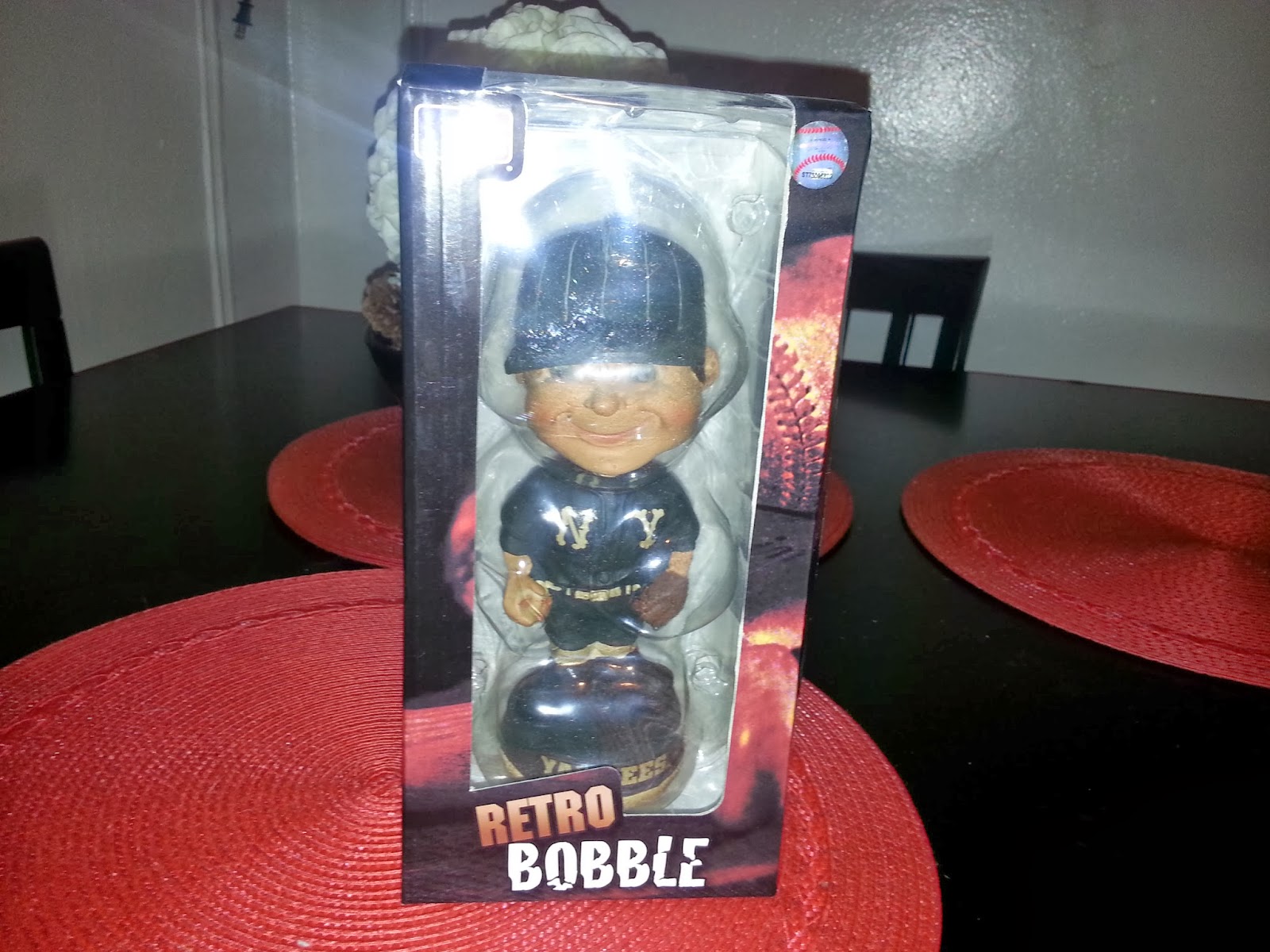 When I got the package from mlb.com, the bobblehead came in a package that had a clear front with Retro Bobble on the front and a baseball and bat in the background. 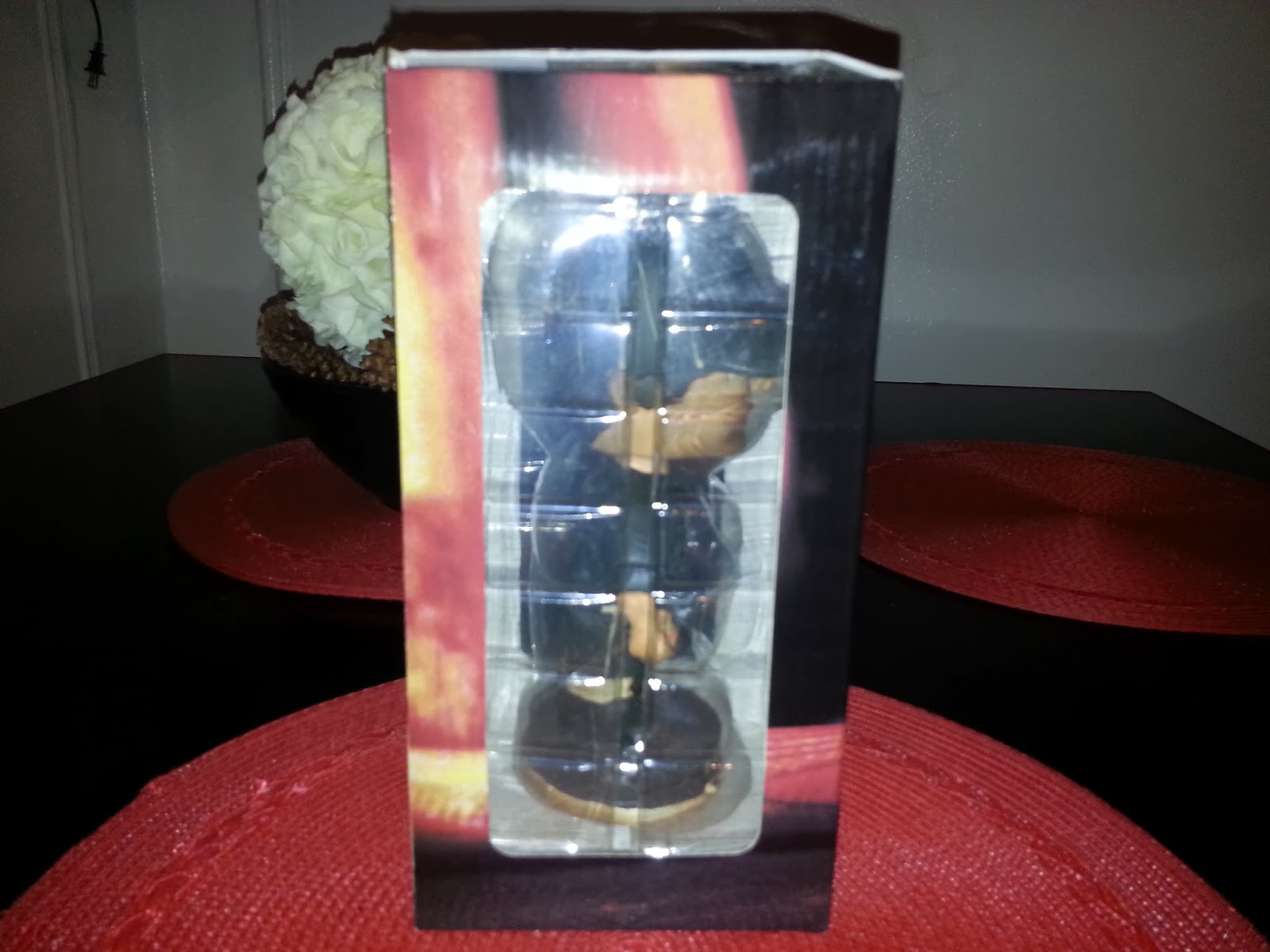 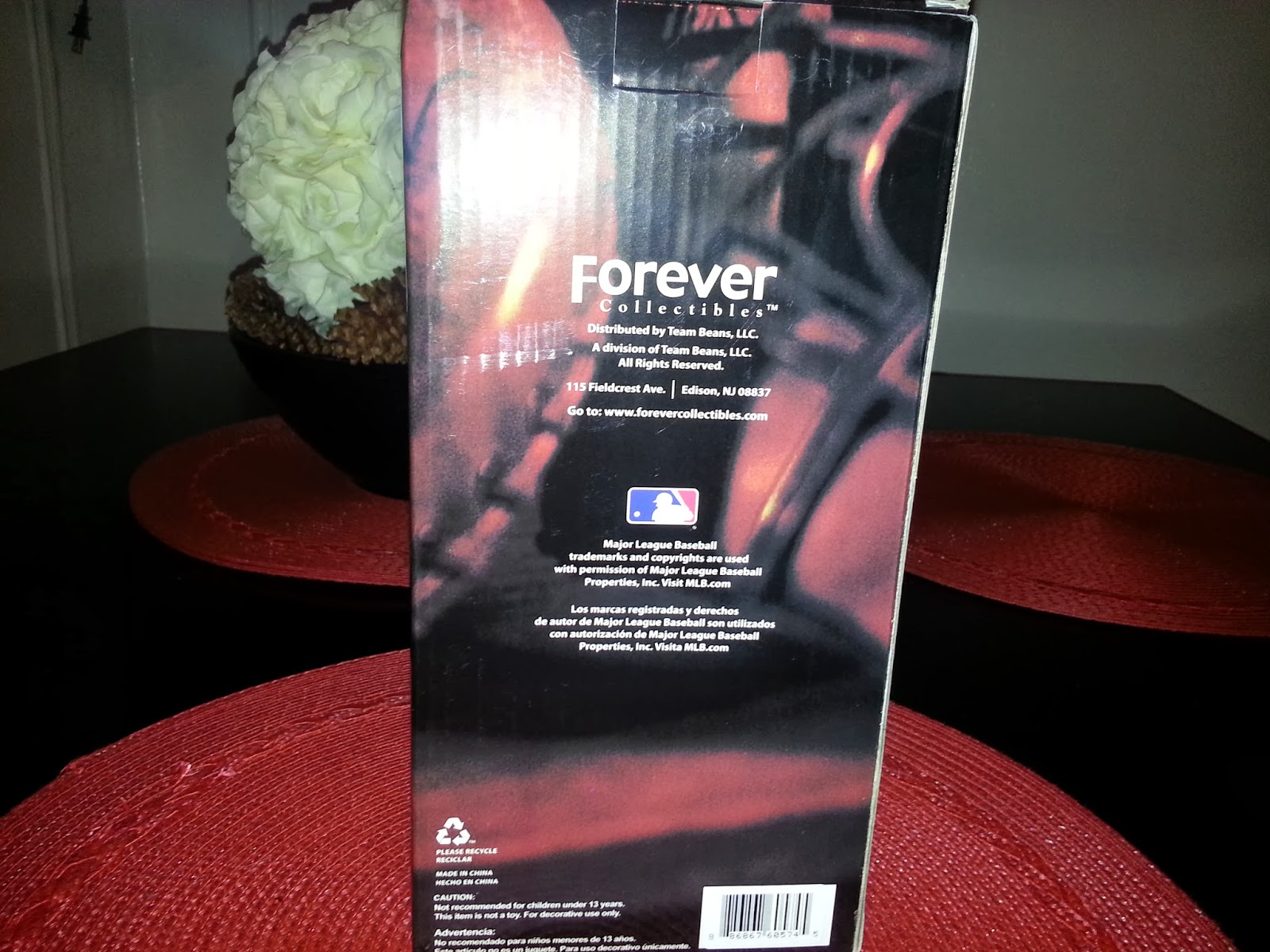 The back of the package just gave you information on Forever and MLB trademark rights. 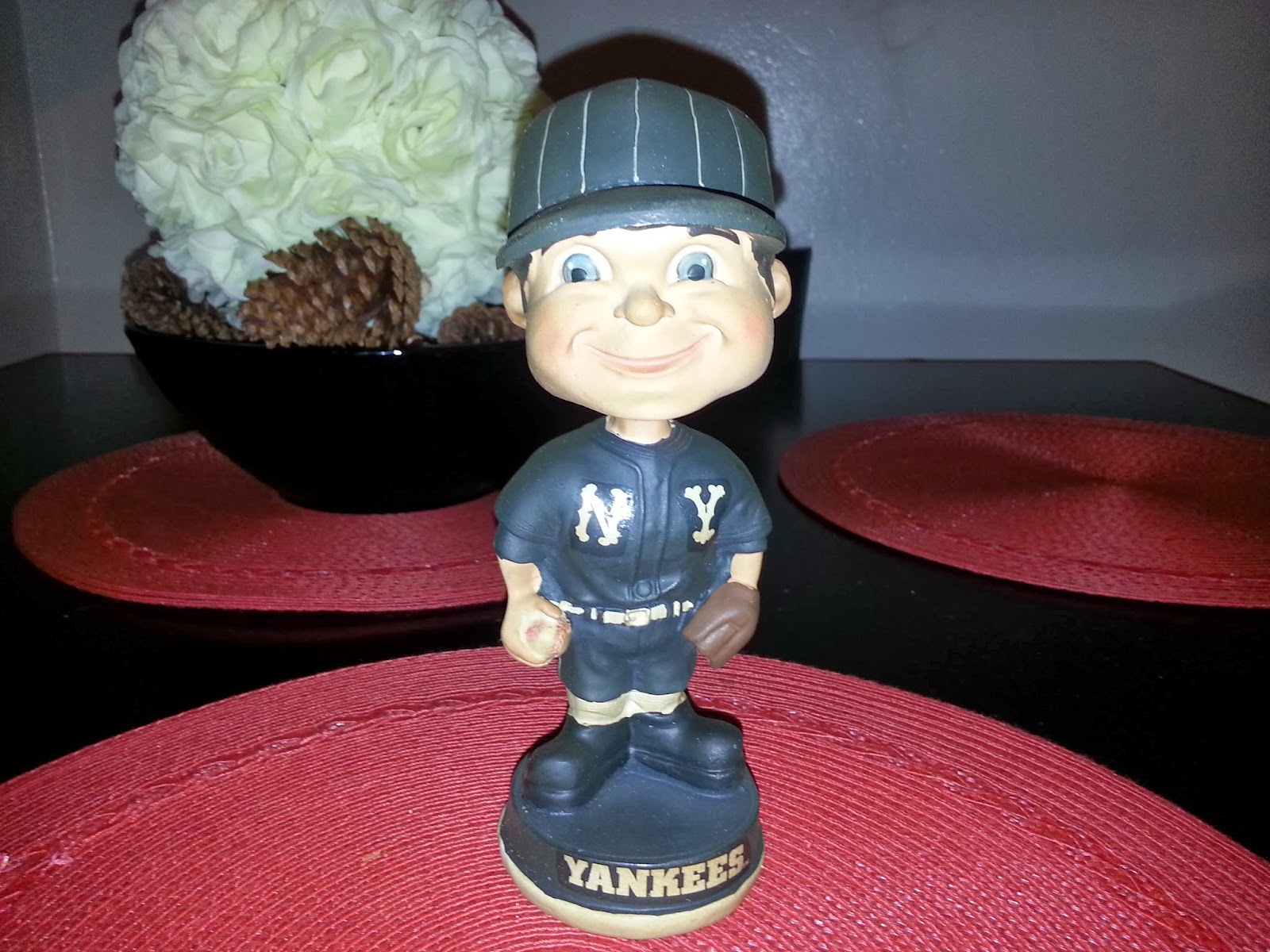 Here's the bobblehead out of the package. As you can see, it's in the dark blue Highlander colors. The lettering, belt and socks are not white, but a sepia color to give it an old style look to the bobblehead. The bobblehead is made of a hard plastic that almost has a rubbery feel to it. I bought a Mr. Met bobblehead at Citi Field a couple of seasons ago and that bobblehead felt exactly the same. At the time, I was expecting the bobblehead to be made of plaster but I knew what to expect this time around. I'm still not 100% sure if I like that. 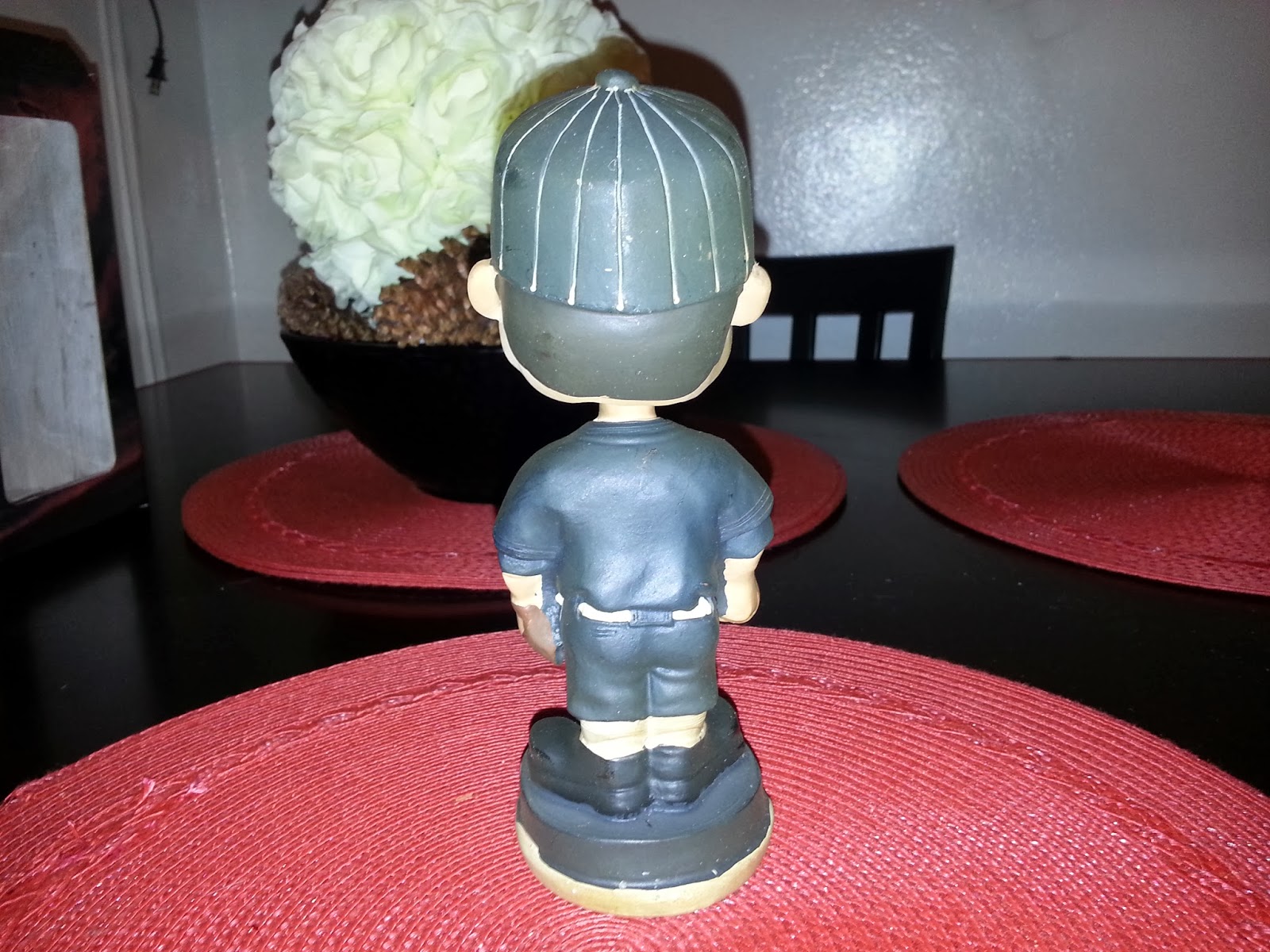 The back of the bobble has no numbers as no team had them back then. The Yankees wouldn't have numbers on the back of their uniforms until 1929 and were the first team in the majors to have them. The paint job on the back here is pretty good, except for the back of the base where it looks it was painted over the base lines. That doesn't matter much to me because I don't display the back, just the front.

Overall, I do really like this bobbehead. The hard plastic is growing on me although I would rather it be made of plaster like most bobbleheads are. Making a Highlander bobblehead is a great idea, one I'm surprised the Yankees haven't done as a SGA yet. I hope to see a bobblehead in a 1927 uniform at some point as well as a 1912 uni. But I am thrilled that I am able to add this bobblehead decked out in the 1904 Highlanders road uniform to my Yankees collection and hope to add more this upcoming season.
Posted by Unknown at 7:20 PM