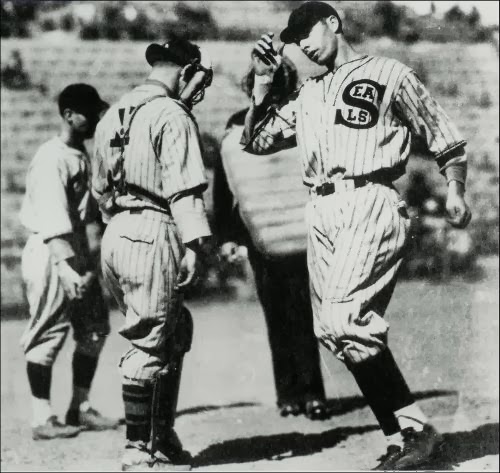 Normally, I don't buy bobbleheads from other teams. Yes, I have been to a few Mets games solely for the purpose of attending their bobblehead giveaways, but for the most part I stick with Yankee bobbleheads. I would like to one day start a bobblehead collection of players who are in the Hall Of Fame, but that's for when I have the room and most importantly, the money.

However, there was one bobblehead that was given out by a team not located in NY (well, they were at one time) that I really wanted and thanks to a fellow member at the bobbleboard.com, I was able to land this awesome piece. 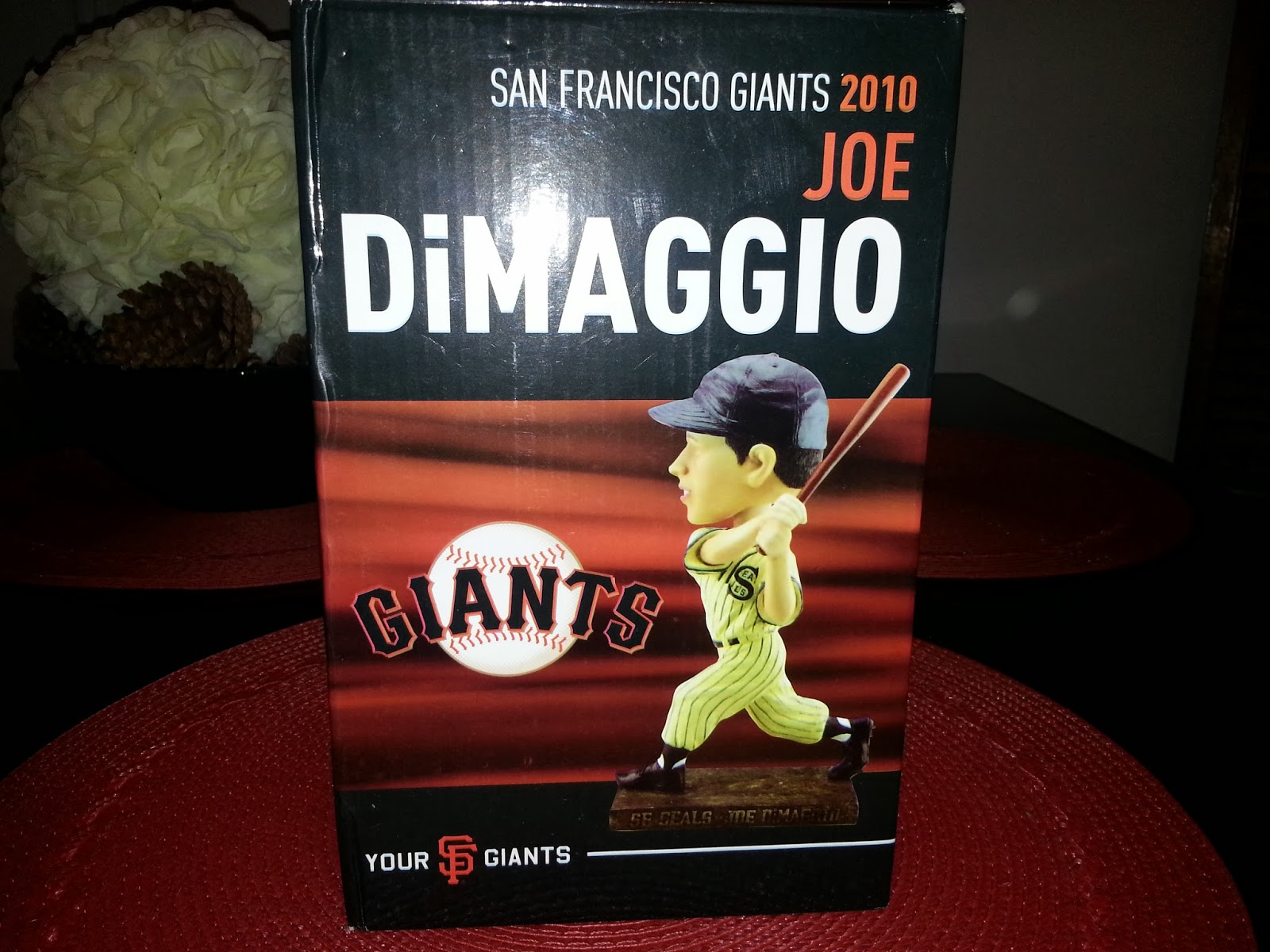 The front and back of the box looked exactly the same. A picture of the bobblehead with the Giants logo next to it. 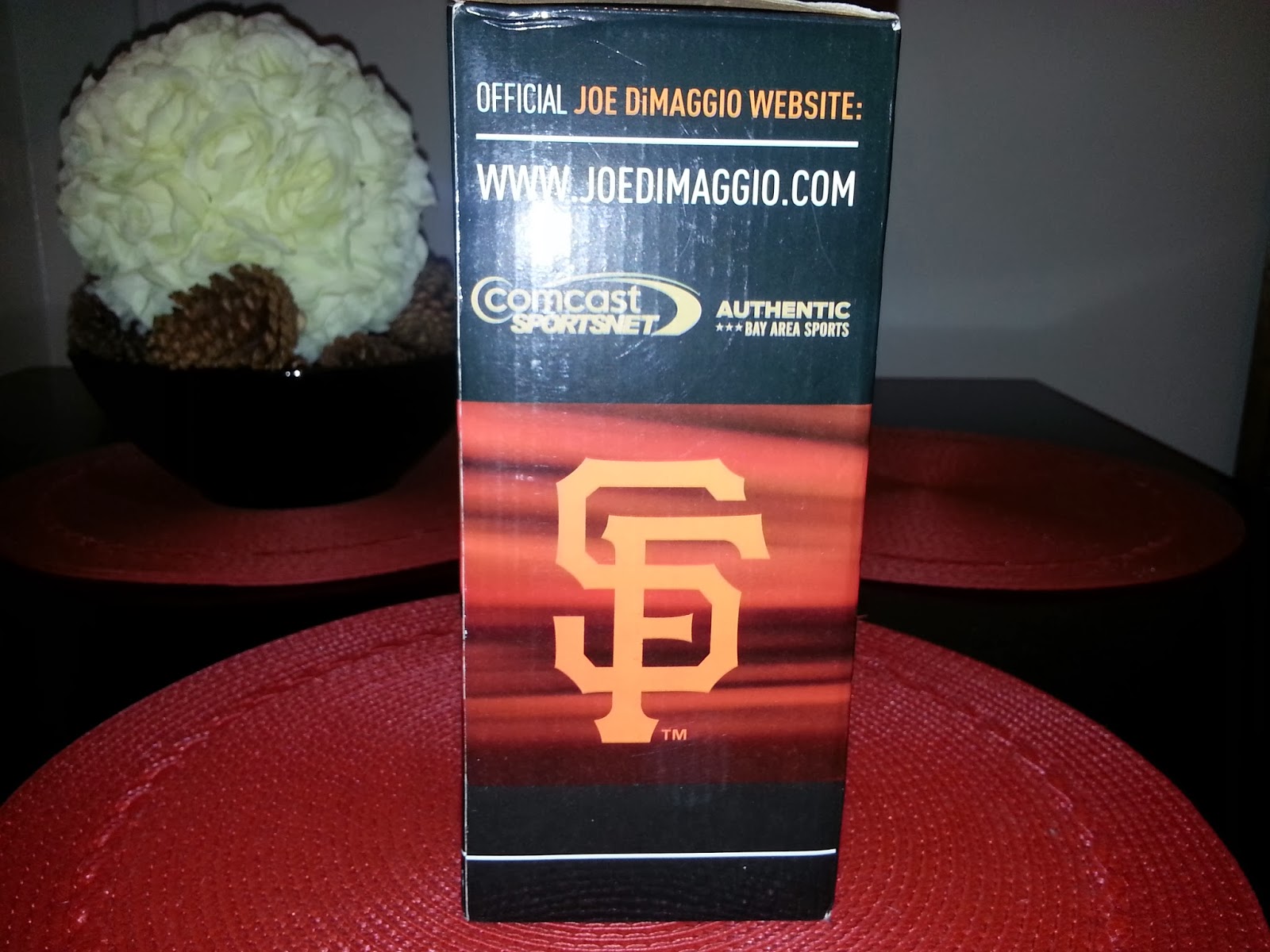 Also, both of the side panels had the web address for Joe Dimaggio's official site, the sponsor and the Giants secondary logo. 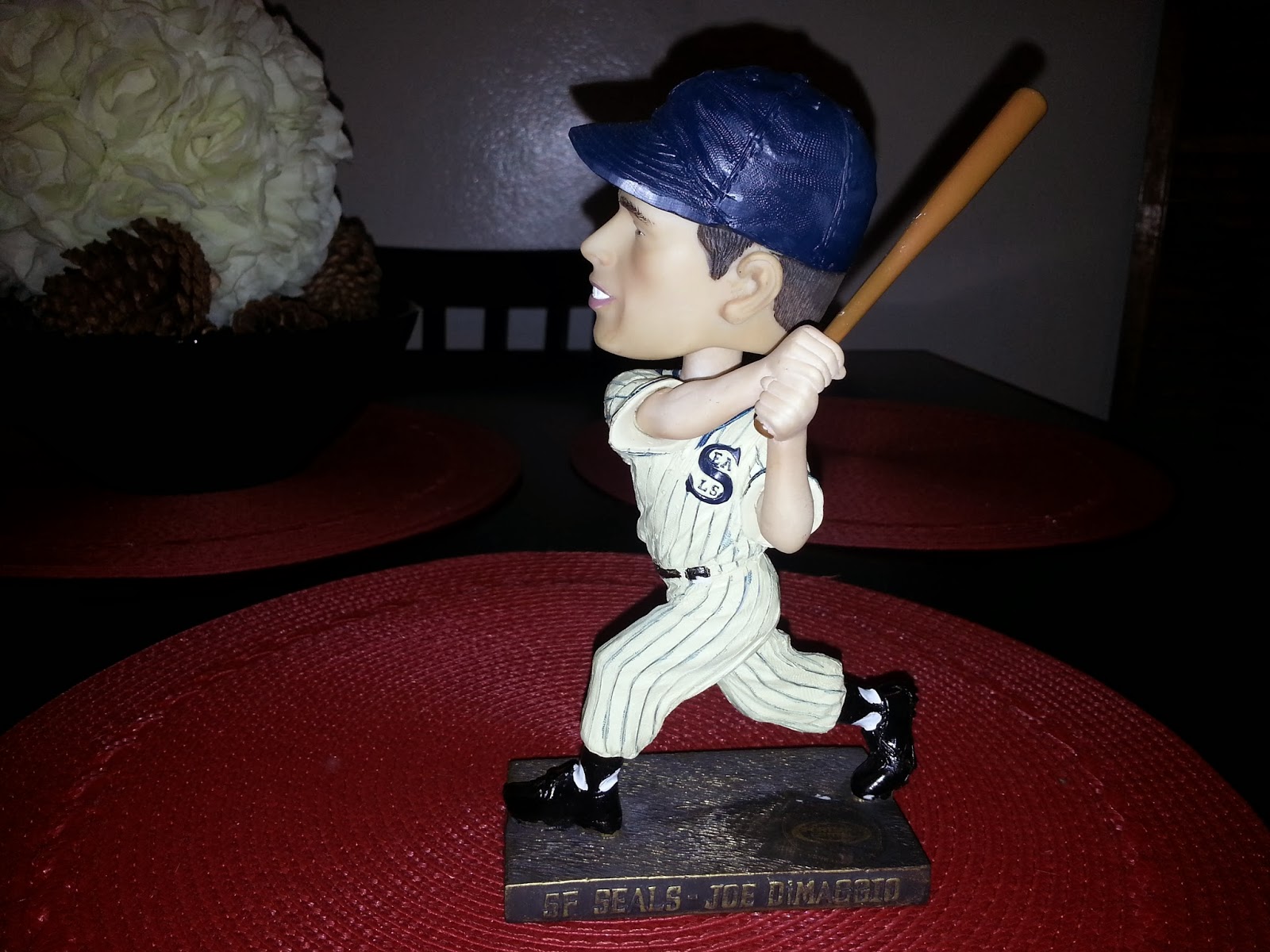 Out of the box, I can tell you this bobblehead looks brilliant. The bobblehead has him wearing the 1933 Seals home whites with pinstripes. He is captured in his classic follow through as well as his classic over bite. 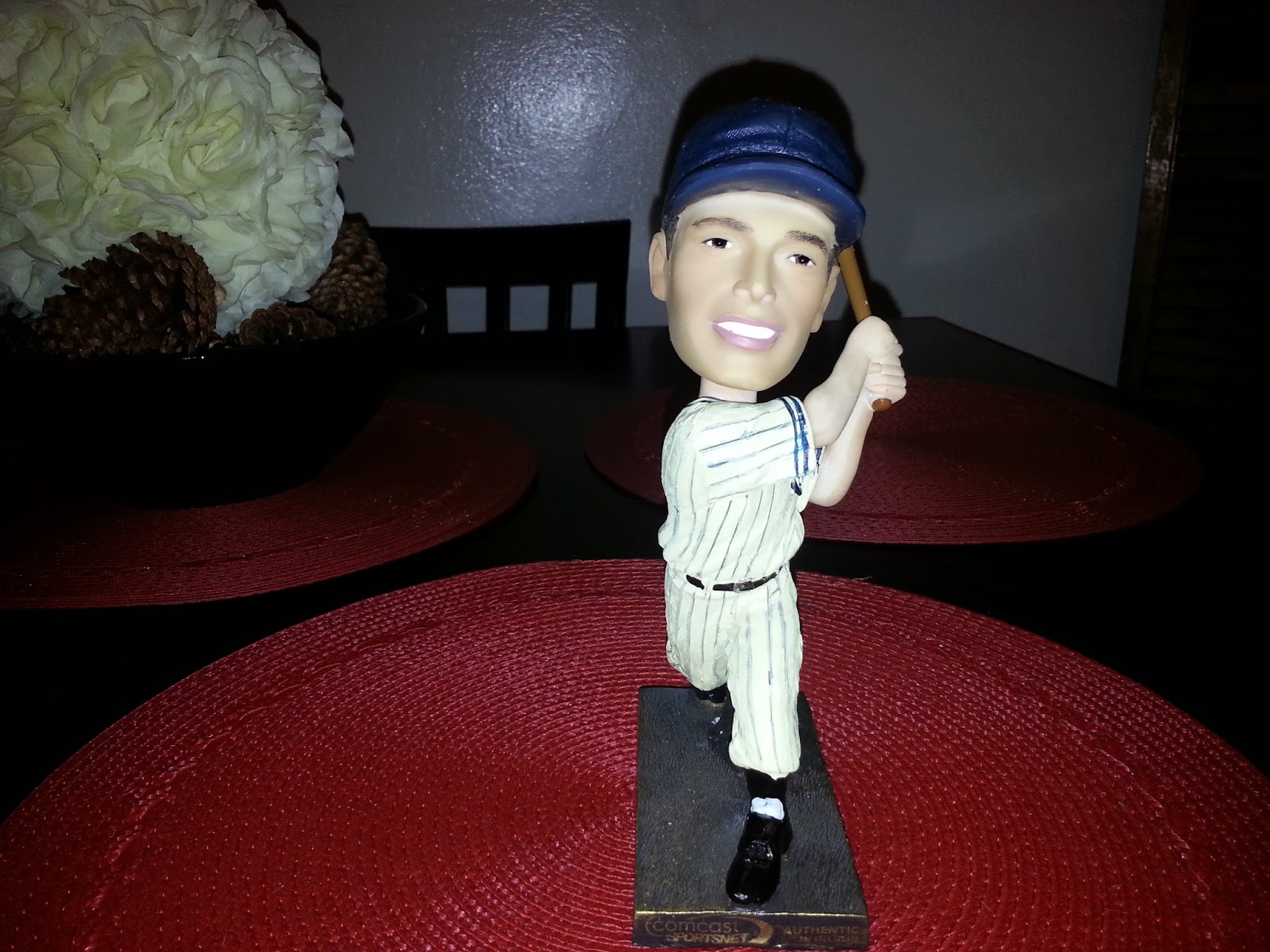 As you turn the bobblehead so that it's facing forward, you can see that he is smiling as if he knows that no one is going to get the ball he just hit. Also notice that the paint job on the sleeve trim isn't the greatest, but it shouldn't be a deal breaker. The uniform looks exactly how it did from pictures I've seen of it. I always thought there was a logo on the cap, but upon further review I've learned that there wasn't in 1933. 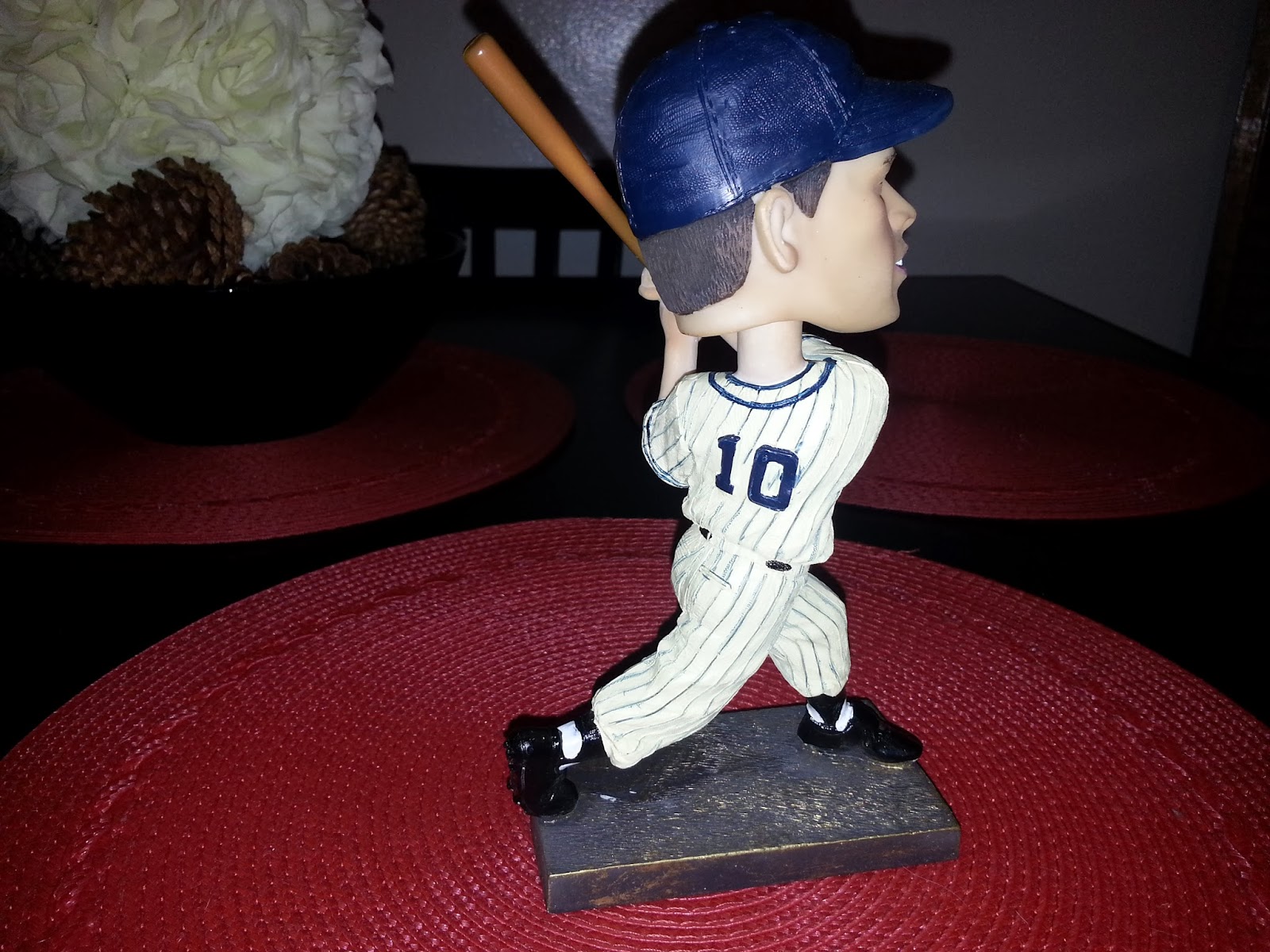 The back of the bobblehead shows Joe wore number 10 with the Seals. As we know, Joe wore 9 when he broke in as a Yankee, then switched to his now famous 5 the next season. Knowing he wore another number with the Seals is very interesting to me as I always thought he wore 9 or 5 with them. I also love the baggy bottoms the players wore back in the day. 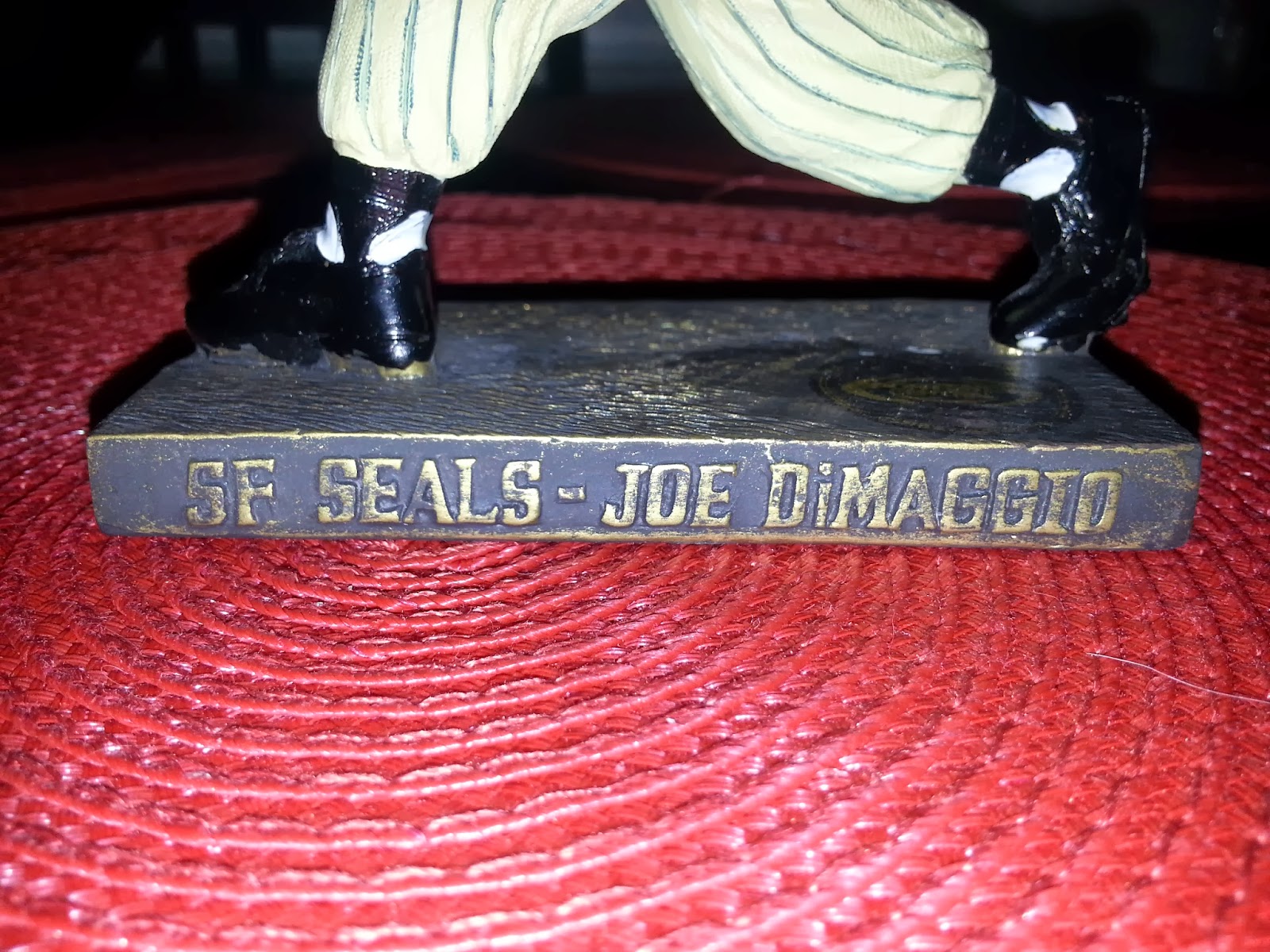 The base looks likei t's made of wood and has gold lettering on it stating that you indeed have a Joe Dimaggio of the San Francisco Seals bobblehead. 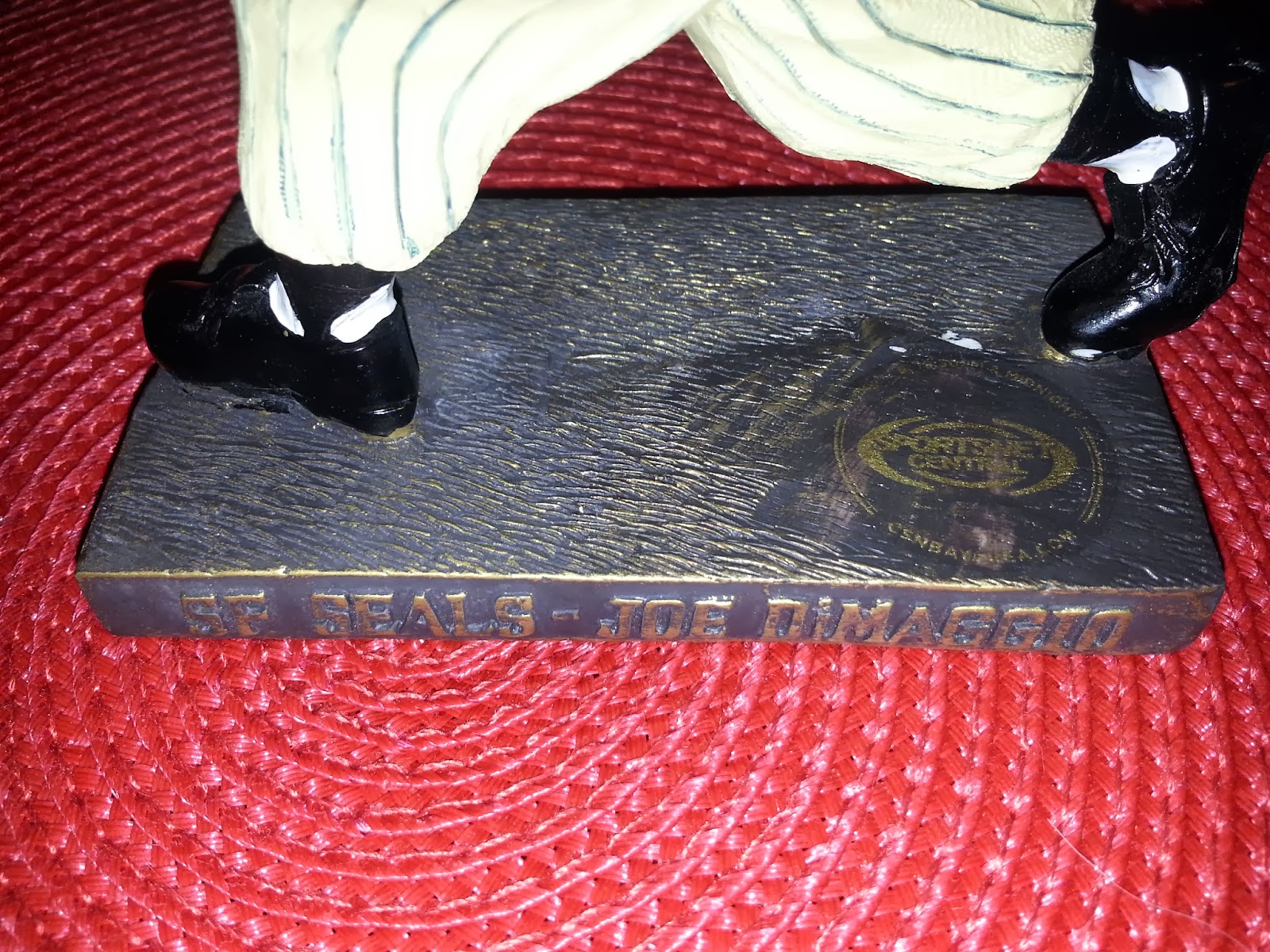 On the top of the base, right by Dimaggio's feet is the Comcast logo. No, the base isn't dusty or anything. It just looks that way.

I think this is a real fun bobblehead to own. It's a different Dimaggio piece to add to the Yankees collection. I don't own the Columbus Clippers Joe Dimaggio bobblehead they gave out several years back, so this is my first Dimaggio bobblehead. I'm tempted to hunt down the variant, which has the Italian flag painted on, which I think was given out during a Giants Italian Heritage Night. I'm just thrilled that I was able to add this one to my bobblehead collection and will have a permanent spot on my Yankees shelf.
Posted by Unknown at 10:11 PM