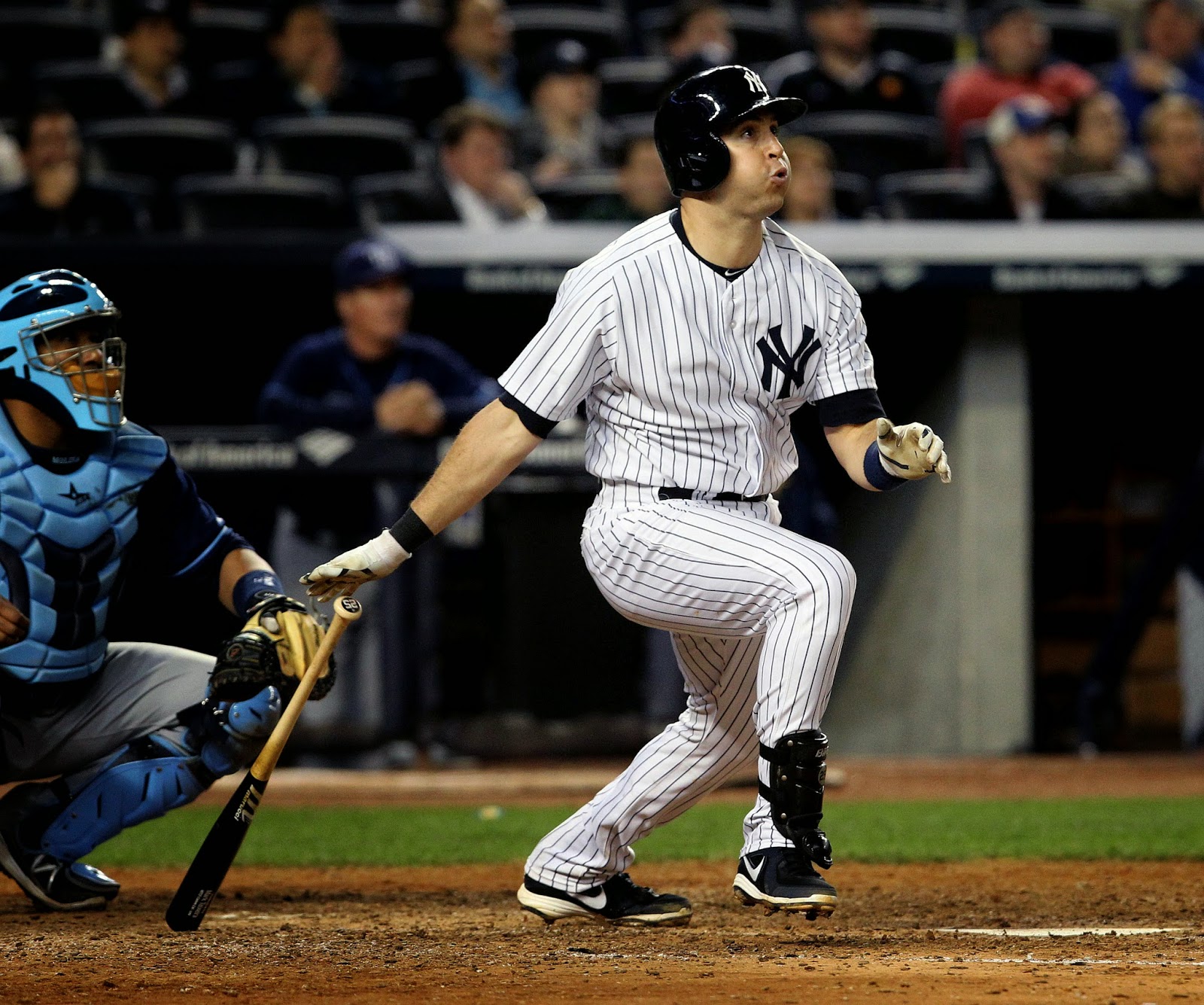 Back on Thursday, June 19th, the Yankees held their first bobblehead give away of the season. Now, as a bobblehead lovin' mofo, I was going to be there. Throw in the fact that it was Mark Teixeira Bobblehead night and I was practically scaling the wall to get my hands on one of these to add to my bobblehead collection. Thankfully, I was one of the first 18,000 fans to get to the Stadium early and Mr. Teixeira was added to my collection. I was then able to "enjoy" the game, watching the Yankees beat the Blue Jays in an important AL East battle 6-4. I say "enjoy" because the dude who was sitting next to me was invading my personal space by leaning on my arm, putting his back on me to take a picture of his group and opening his rather large book to read. I should have known he wasn't a baseball fan when he asked who Derek Jeter was.

But I didn't care. I had my bobblehead and I couldn't wait to get home, open it and put him on my shelf. When I opened the box, I was in for a bit of a surprise. 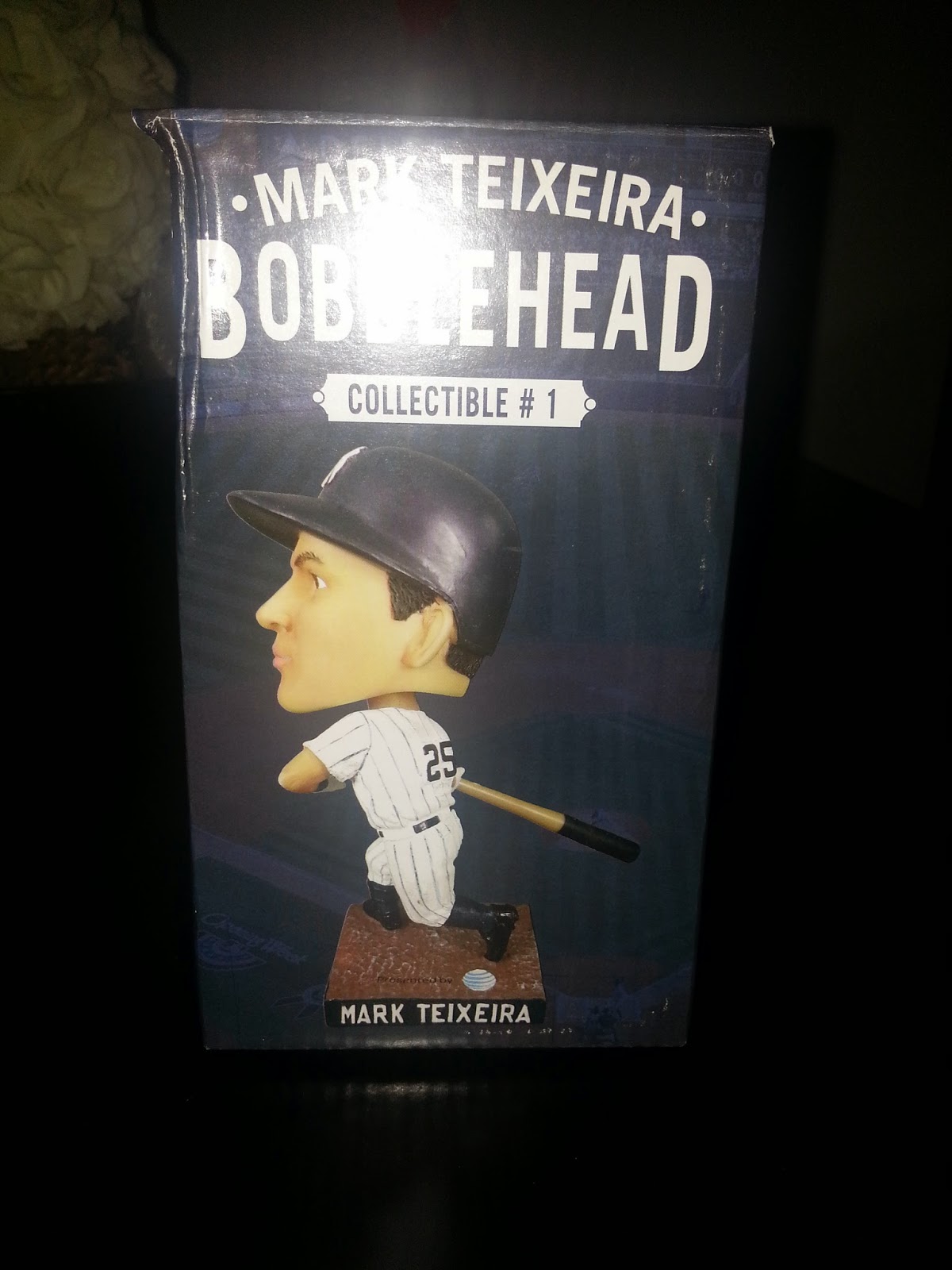 First off, let's take a look at the box. As you can see, I was given a box that was less than perfect. If I ever did want to resell this, the box would hurt the resale value on it. Most bobblehead collectors want the original box and for it to be in as pristine condition as it can be. This one falls short of the mark.

The front of the box has a picture that shows what the bobblehead inside will look like once you open it up. It also tell's you who it is and what number in this season's series it is. In this case, it's the first of 4 player bobbleheads to be given out this season. This doesn't count the Hello Kitty and Lucy bobbleheads that will be given out later in the season. 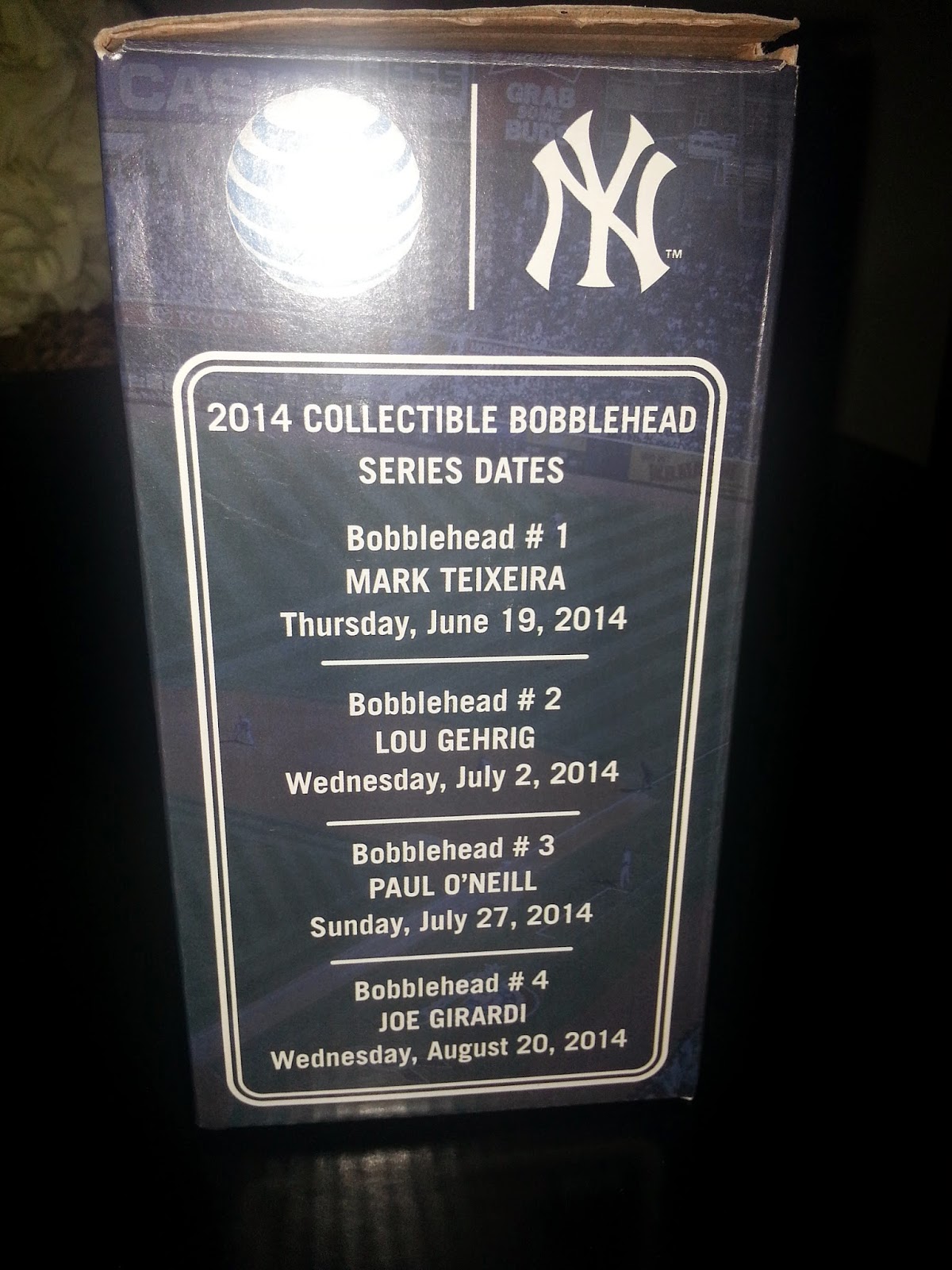 The box does have the listing of the rest of the player bobbleheads and the dates they will be given out. Right off the bat, I can see I will be missing the Lou Gehrig give away. Thank heaven for eBay. 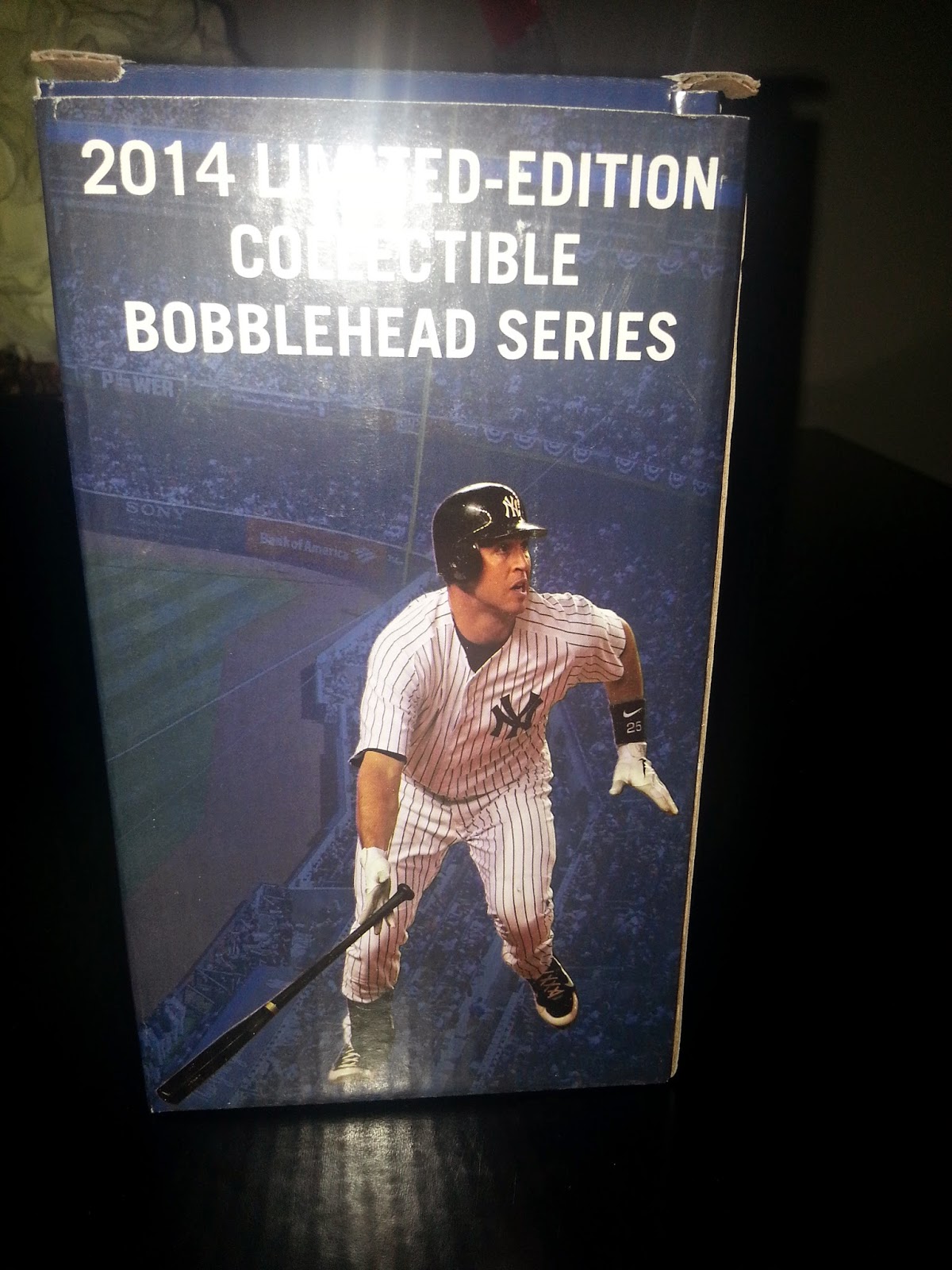 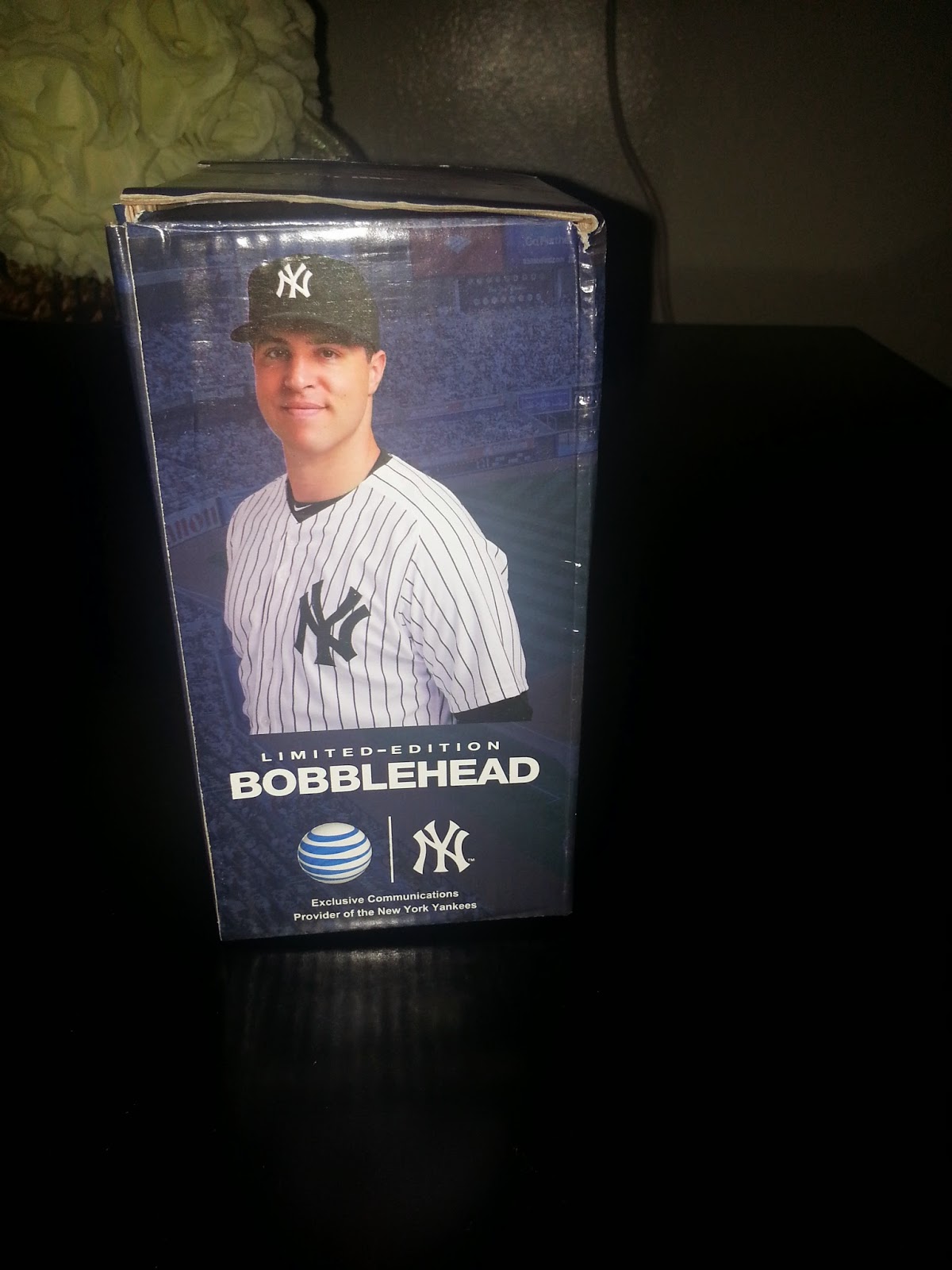 The other two sides of the box has Tex prominently featured, just in case you forget which bobblehead you are getting and when you see the bobblehead, you just might. 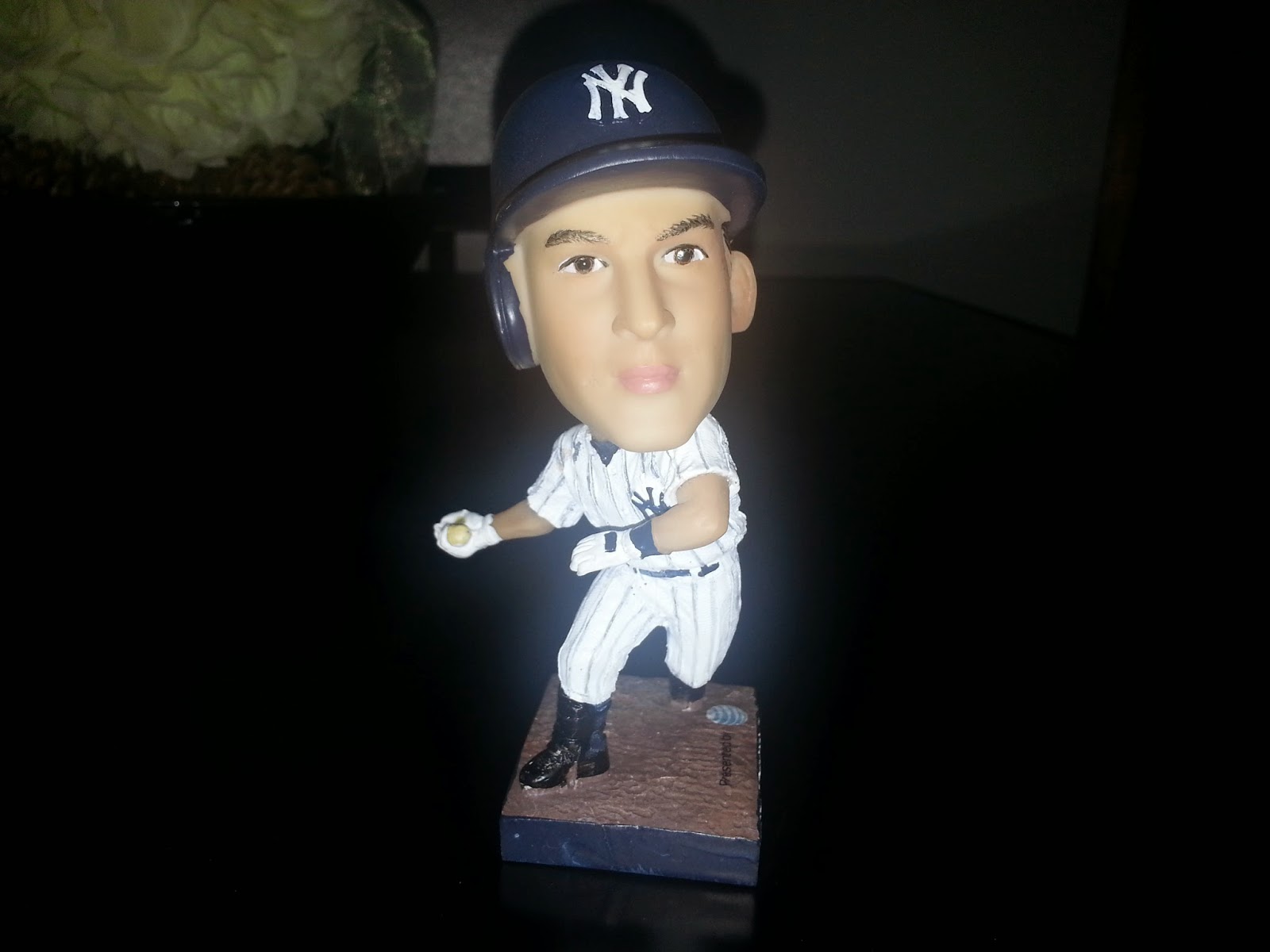 I'm not really liking this bobblehead. First off, I'm not crazy about the size. It's a few inches smaller than a regular size bobble. I don't understand why we have to get smaller bobbleheads. Is it a way to save a few dollars?

That's being said. I could get past the size if this bobblehead looked anything like Mark Teixeira to begin with. I'm shocked that Alexander Global would allow this off the assembly line. They are usually pretty good with the likenesses of players. This one falls way off the mark. No pun intended on that one folks. 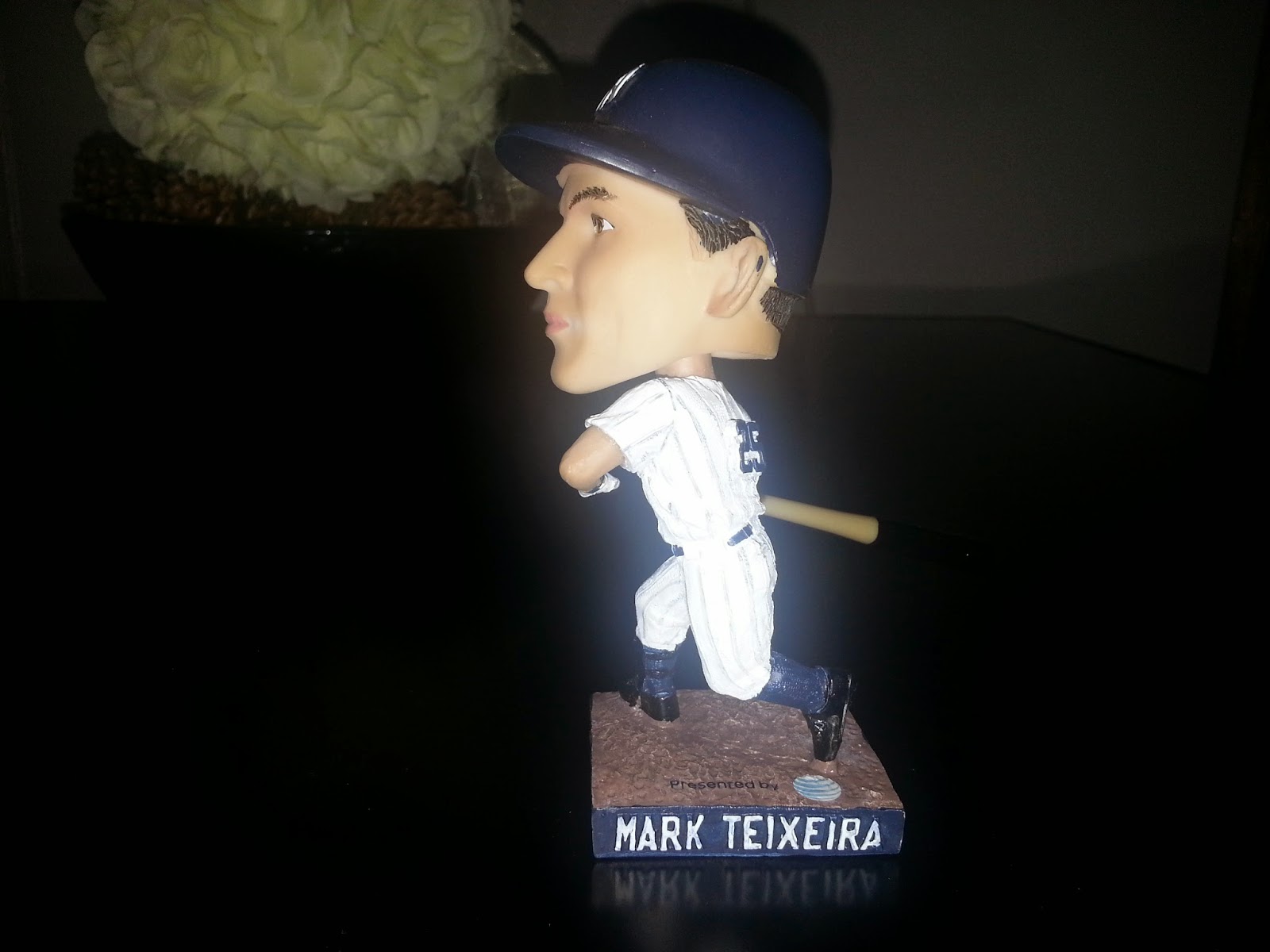 On one side of the bobblehead, you get the name of the player and the sponsor on the base it's self, which is AT&T on this particular bobblehead. The lettering looks kind of sloppy as well, The last part of the last name is so crooked that the A is almost off the base completely. Plus, the paint on the letters as well as on the figure its self is very sloppy. There is a sploch of paint right on the ear, the hair is missing pain in spots and the lettering looks like a five year old painted them. 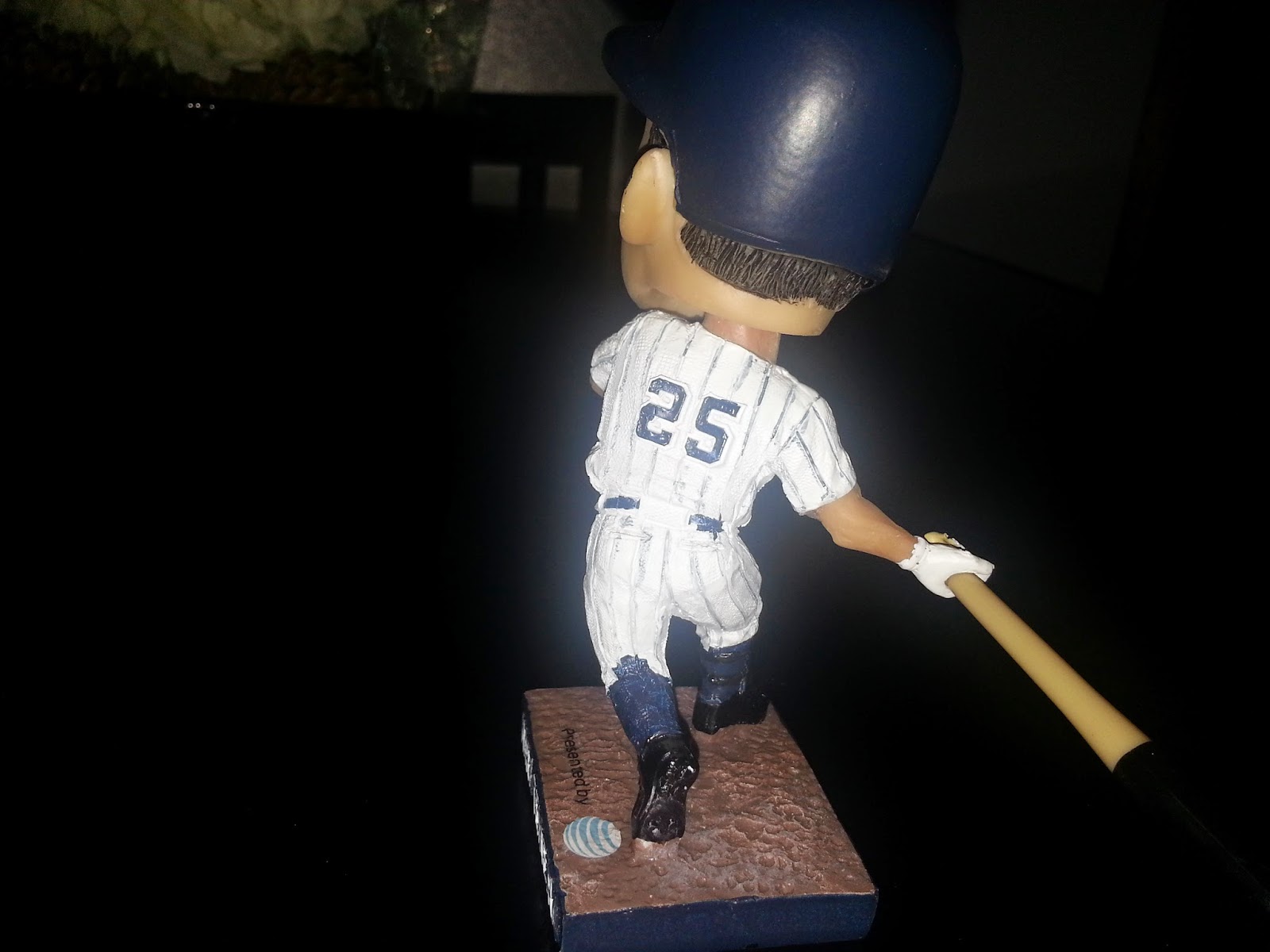 The back of the bobblehead is probably the best angle on this bobblehead. Numbers look fine and the pinstripes afre not crooked nor are they missing paint. The helmet is also nicely painted. The bat is screwed in, but it's not tight in it's hand, so if your are looking to pick up this bobblehead, your going to have to be careful with the bat. 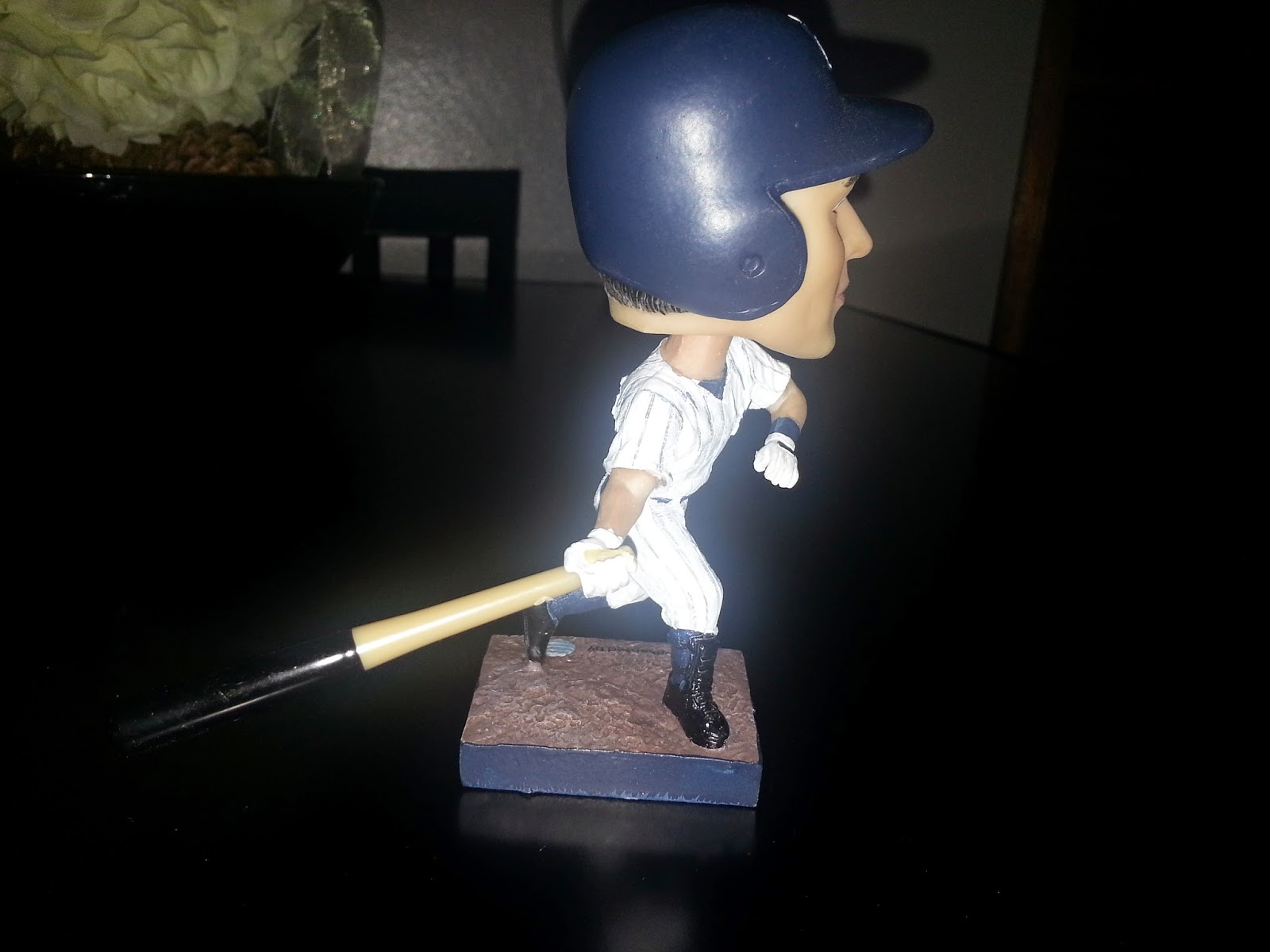 Maybe this is the best side. You can't see the face.

I don't know what happened with this bobblehead. Maybe it's just mine, but that one side, the main side, is terribly painted. I don't know what happened at AGP. They are usually a very reliable company when making these bobbleheads. Someone really dropped the ball on this one. The reaction I got when I opened the box is usually saved for Forever bobbleheads. Hopefully, someone got an earful regarding this one.

Regardless of how this one came out, I am looking forward to the other three bobbleheads, especially the Lou Gehrig which is commemorating the 75th anniversary of his famous speech. If you haven't seen the bobblehead, here's a picture of what fans will be given this Wednesday at 1:05 PM: 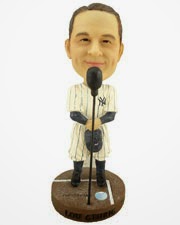 Man, I am going to hate missing this game.

Last year, AGP did a good job on the Jeter, Matsui, Rivera and Berra bobbleheads. Plus, I have loved their earlier bobbleheads that were given out at Yankee Stadium in 2002 and 2003. That's pretty much why I am giving them a pass on the Teixeira. Although I am pretty disappointed with how this one came out, I believe the next bobbleheads will be better and ones that will be worthy of being displayed in any bobblehead collection.
Posted by Unknown at 7:44 PM