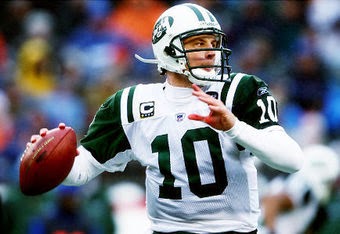 When I first restarted collecting cards back in 2003, I knew I would be collecting players that I admired. I knew I would start a Tino Martinez PC at some point and had ideas on a Roberto Clemente. On the Jets, I like Wayne Chrebet and he was also a player I wanted to collect, but I didn't start a Chrebet PC right away.

My favorite position in football is Quarterback. It's the glamour position in the game and I have seen some great QB's in my time as a fan. Montana, Moon, Bradshaw, Elway, Kelly, Manning and yes, even Brady (hacking) are just some of the greats I have seen play and just enhanced my love of the position.

As a Jets fan, I have seen some good QB's play under center for my team. When I first started watching the Jets, Richard Todd was the teams QB and he took us within a game of the Super Bowl back in 1983 before the Dolphins ground crew and AJ Duhe took us out. Then there was Ken O'Brien, who I don't feel gets the due he deserves just because he was in that heralded draft of 1983. The same draft that had quarterbacks like John Elway and Jim Kelly. The Jets, drafted Ken O'Brien at pick number 24. 3 picks later, the Miami Dolphins picked Dan Marino. O'Brien was still a good quarterback, made 2 Pro Bowls in 1985 and 1991, was the highest rated QB in the NFL in 1985 and was the first QB to pass for more than 400 yards in a game, which he did against the Seattle Seahawks in 1986. We also had Vinny Testeverde who also bought the Jets within a game of the Super Bowl in 1998, even leading the game at halftime. But no one was stopping John Elway and the Denver Broncos, who were on their way to win their second straight Super Bowl. I still hold a grudge against Denver for that one.

But in the 2002 season, the Jets were 1-4 and Coach Herman Edwards decided to start a young player from Marshal University named Chad Pennington. Pennington lead the Jets to a 9-7 record, winning the AFC East Title throwing for 3,120 yards, 22 touchdowns, 6 INT's and had rating of 104.2, a Jets record. He then lead the Jets to a victory over Peyton Manning and  the Indianapolis Colts 41-0. From that season on, I had a new favorite player and since I had just restarted collecting cards, I thought why not collect Pennington, so over the years I picked up a lot of Pennington cards, even sacrificing an Aaron Rodgers autograph card to get a Pennington autograph into my collection. Ok, maybe I could have gotten more for that, but I didn't care. I wanted that Pennington autograph.

When the Jets released Pennington in favor of Brett Farve, he signed with Miami and led them to the AFC East Title. As happy as I was for Pennington, I couldn't root for him due to my hatred of Miami and my Pennington collecting stopped that season. 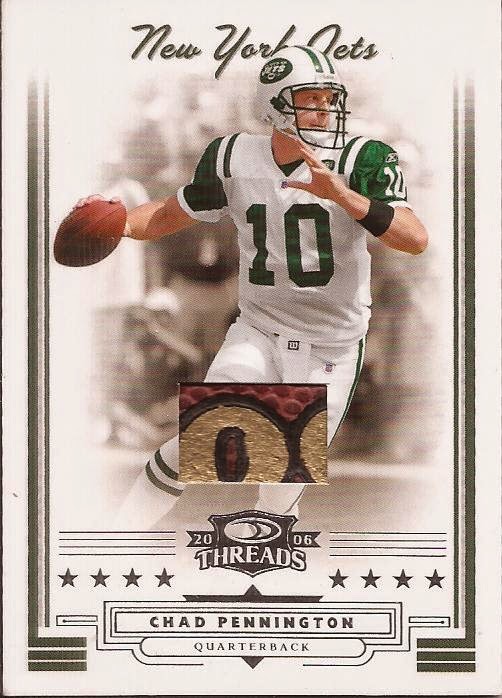 I grabbed this 2006 Donruss Threads card off eBay for a whopping $4.00. I just love the lettering on the piece of the football in this card. 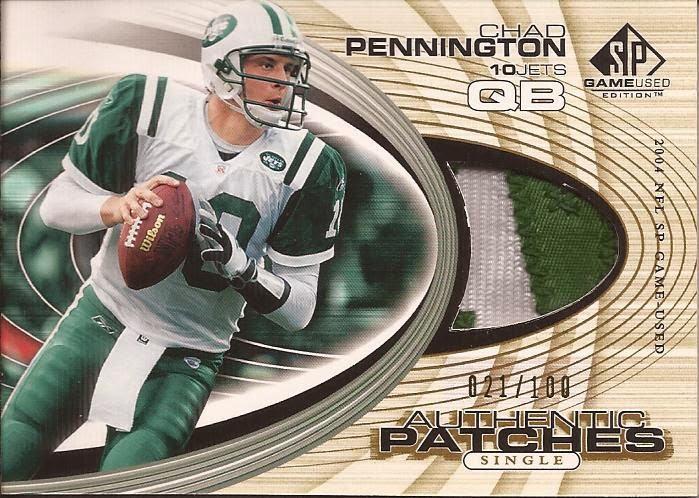 I love patch cards and this card has a piece of Pennington's name plate off his road jersey. 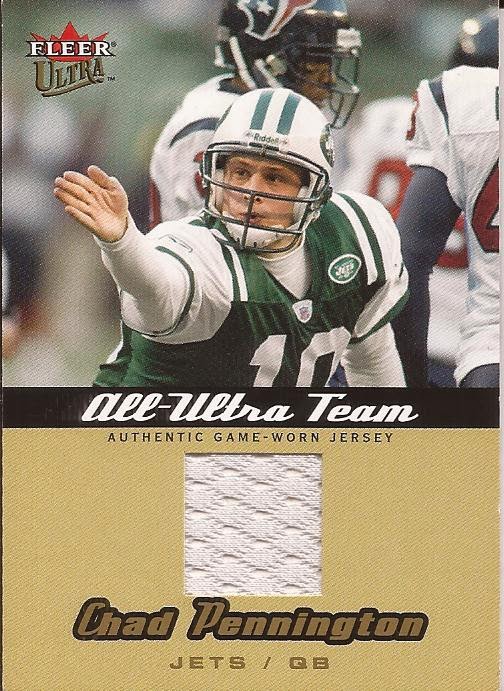 I just love this card for the picture alone. In a game against the Texans, Pennington scrambled for a first down and decided to let Houston know. 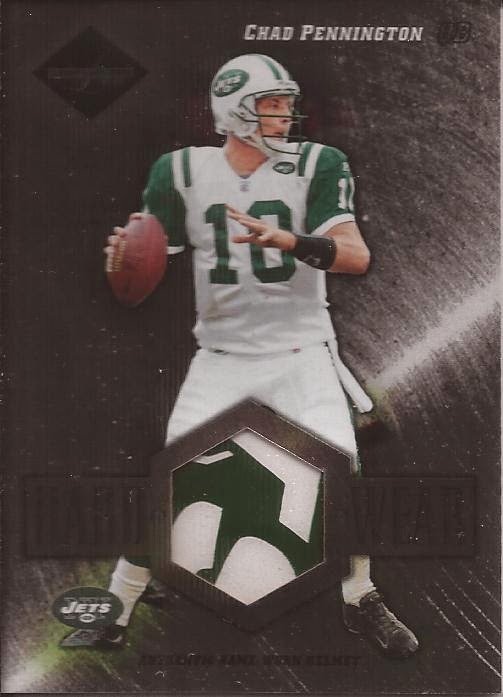 Probably my favorite Pennington card. I love this piece of game used helmet and love that you can see the T and S of the JETS logo. 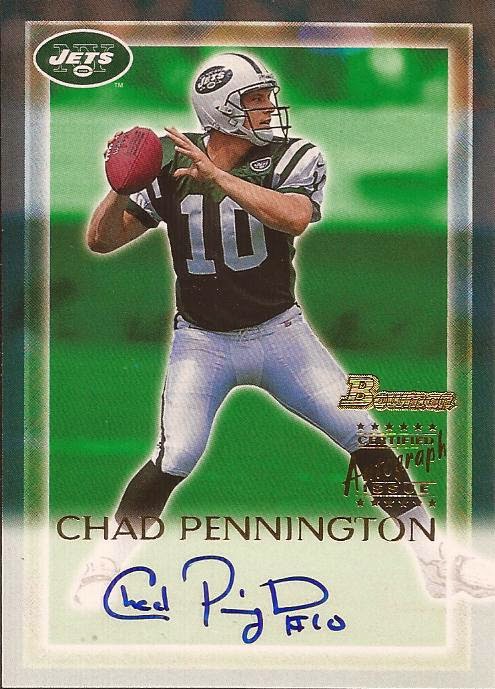 Simple, but I love this card. 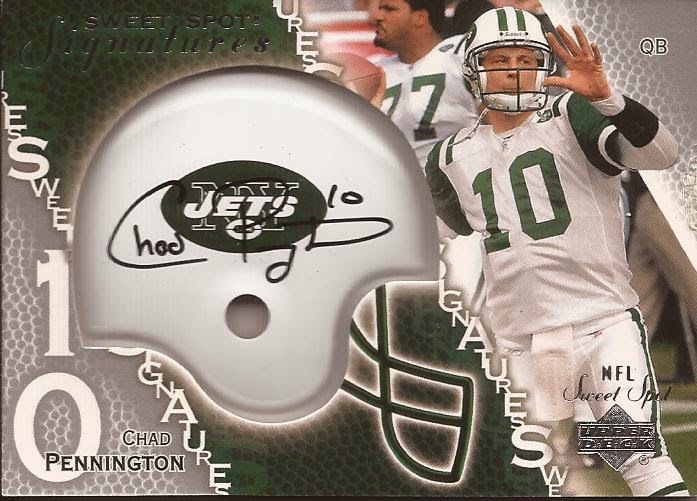 I have always been a big fan of these Upper Deck Sweet Spot Signature cards. I was thrilled to see that there was a Pennington card and added it to my Pennington collection. 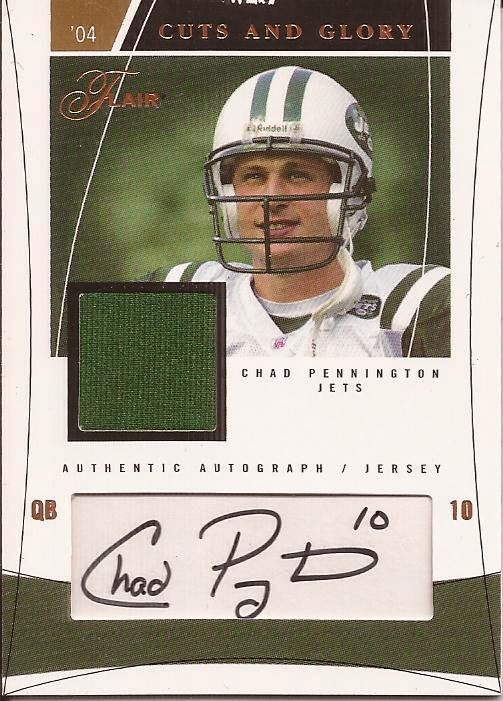 My very first Pennington autograph. Of course it was going to make my list.

Looking over my Pennington collection reminded me just how much fun I had hunting down cards on eBay, card shows and trading for them with other collectors. I really wanted to be THE Pennington collector and try to get every Pennington card ever made. I obviously fell way short of that goal, but I loved the pursuit.

I have been a Jets fan since the 1980 season and have seen a lot of great Jets, but Pennington is my favorite. He may not had the greatest arm, but when he played and was healthy, the Jets won. I often wonder had he stayed healthy where he would be among the the Jet QB's in Jet history. I believe he would have been right under Joe Namath as an all time great Jet quarterback. He had the smarts and I really think he could have won a title here. I would love to see him come back here as a coach a I think he would do very well. But whatever he decides to do, I will always be a Chad Pennington fan.
Posted by Unknown at 5:57 PM