Showing Off The New Swag

Now that Thanksgiving has come and gone, what's the best way to digest the turkey, stuffing, mashed potatoes and God knows what else was consumed?  Football? Beer? Leftovers? Nooooo! Picking new goodies for the Sports Room.

I went to the White Plains Sports Card Show on Thanksgiving weekend. Usually, I can find quite a few things to add to my various collections. Unfortunatel, this time around there was not a whole lot I wanted to pick up this time around. I did manage to go home with 2 autographed 8x10's of Former New York Jets 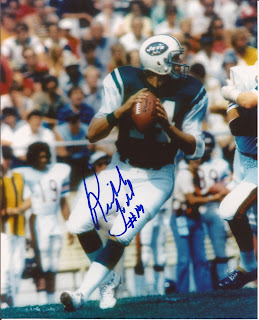 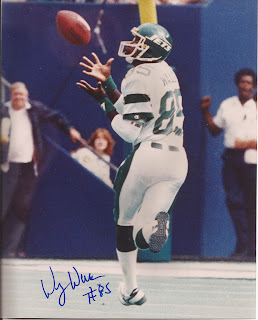 I also bought a DVD of the 1969 and 1973 New York Jets Season Highlight films to go with my 1964-67 Highlight films DVD. I love having these. It facinates me to watch these films as they not only show how the teams played that particular season, but looking at what people wore, how society was back then is a big thrill for me. I watch the Mets highlight films from time to time and when I found the Jets films I pounced on them.
I also got some TTM successes as well.
Michael Ray Richardson 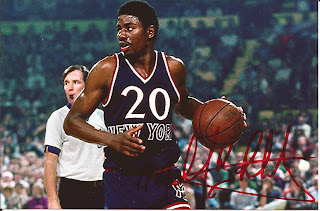 ﻿
For some reason, the pen he originally used didn't come out on the other picture, so he signed the dollar bill I sent for return postage 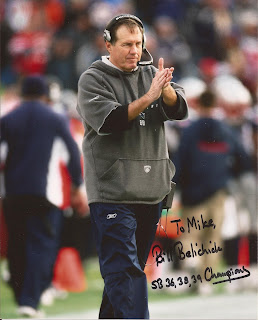 I originally asked him to sign a pic of him with a Jets helmet and a bookplate for my Jets project, but he didn't reurn either and sent this picture. Nice to add a future Hall Of Fame coach to my collection, but would have loved to got the book plate signed though.

I was also able to add a 2012-13 NBA Hoops Mike Bibby autographed card. 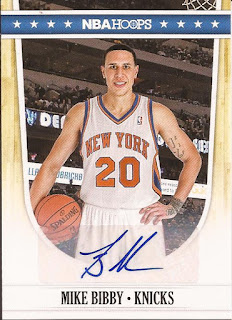 This was an ebay purchase. For less than 6 bucks dlvd, I couldn't pass it up. Another autograph for the Knicks PC.


Thanks for dropping by the Sports Room. Come back soon. Bring beer.