Recent Additions To The Sports Room.

To be honest, as of late, my sports pick ups have kind of slowed down. Most of my disposable income has been spent on my pop culture/Spider-Man/Batman/superhero collections. But, that doesn't mean I don't keep my eye open for some sweet deals for my sports collections. The past week, I was able to add a few pieces to my collections. 2 Islander autographs and 1 sports TTM.

The 2 Islander autographs are of players I grew up watching and have wanted to add to my Islanders collection for a long time. 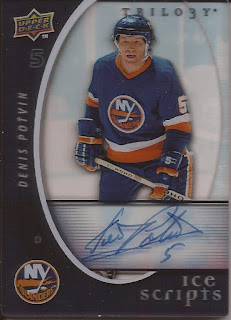 I'm so thrilled to finally have an autograph of the Captain of the Islanders dynasty teams I grew up watching. Denis Potvin was a 3 time James Norris Memorial Trophy winner as the NHL's top defenseman. He won 4 Stanley Cups with the Islanders and was elected into the Hockey Hall Of Fame in 1991. He also won the Calder Memorial Trophy as Rookie Of The Year for the 1973-74 season and was the 1st overall pick in the 1973 NHL Draft. When he retired, he was the NHL leader in goals and points by a defenseman, both has been since surpassed. I have fond memories of watching Denis Potvin play, but even fonder memories of watching him hoist the Stanley Cup over his head four straight years. 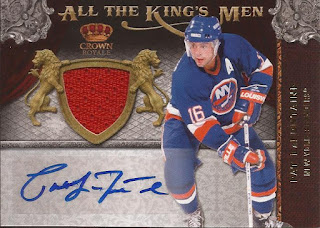 Pat LaFontaine was the only player to have ever spent his entire career playing for New York based teams, having played for the Islanders, The Buffalo Saberes and The New York Rangers. He was drafted 3rd overall by the Islanders in the 1983 NHL Draft. His 1.17 points per game is the best average for an American born player. Unfortunately, he suffered from concussions, which would end his career a bit too early. I remember when he scored the winning goal in the 4th overtime in Game 7 of the 1987 playoffs against the Washington Capitals which is now known as the Easter Epic as it started Saturday night and ended at 2am Easter morning. LaFontaine was a hard auto to get as he doesn't make apperances or sign TTM. He's only started signing certified cards, so I grabbed this one as soon as I could. 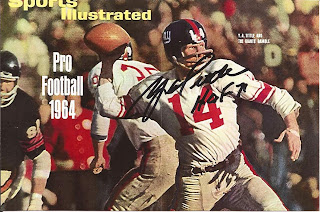 I got my first TTM in the mail in a few months. TTM, for those who don't know means Through The Mail. When I found out that Hall Of Fame QB Y.A. Tittle was signing ttm, I gave it a shot. I had a 5x7 printed out of this Sports Illustrated cover and sent it in along with a book plate for my Sports Illustrated Football book project and he signed both for me in a few months time. Tittle played for the Colts, 49'ers and Giants. He made 7 Pro Bowls, was a 2 Time MVP and was inducted into the Pro Football Hall Of Fame in 1971. Very happy to add his autograph to my collection.

I still have one more item coming to me. I hope to have it by Wednesday. Keep your eyes peeled for it.
Posted by Unknown at 11:20 AM