Showing Off My 5 Favorite Knicks Pieces

Yesterday was an awesome day. The Knicks opened the 2012-13 by steamrolling over the Miami Heat 104-84. Carmello Anthony..ahem, excuse me, Melo Anthony scored 30 points and grabbed 10 boards, Steve Novak Discount Double Checked 17 points off the bench, Raymond Felton scored 14 points and had 9 assists and Jason Kidd scored 12 points in his first game as a Knick. Heck, even Rasheed Wallace got into the act by taking the floor late in the game, per the fans request, and draining a three. It was a great way to open up the season by winning a game against the defending champions. Tomorrow, the Knicks will host the Sixers at the Garden with a Noon time tip off.

I have been a Knicks fan since about 1981-82. When I started watching the team, they were coached by Red Holtzman, in what would be his final season as Knicks Head Coach. They players like Michael Ray Richardson, Marvin Webster and Bill Cartwright. The next season, Hubie Brown took over and Bernard King joined the team and they made the playoffs and I was hooked. I watched Bernard King have back to back 50 point games, I watched Dave DeBusschere pound his fist as the Knicks got the first pick of the 1985 NBA Draft and used it to pick my all time favorite Knick, Patrick Ewing. I watched as players such as Charles Oakley, John Starks, Anthony Mason and later Larry Johnson, Latrell Spreewell and Alan Houston would be coached by Pat Riley and later Jeff Van Gundy would coach successful seasons in NY, making the finals twice. I watched the 4 point play against Indiana, The Dunk against Chicago and becoming the first NBA team to be the 8th seed in the playoffs and make it to the Finals. I lived through the Isiah Thomas mess, the regression of Stephon Marbury and the fire Isiah chants. I am tremendously excited about the upcoming season and hope to see the Knicks make another step toward an NBA Championship.

I have been collecting Knicks stuff since I got back into collecting sports cards. I have been able to add cards, autographs, posters, apparel and even a piece of the Garden floor. I'm going to now show off my 5 favorite pieces of my Knicks collection, which wasn't easy to narrow down. 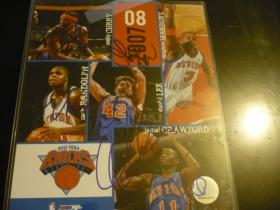 I picked up this multi signed piece from a noted autographer. This piece is signed by Stephon Marbury, David Lee, Eddie Curry, Jamal Crawford and Zach Randolph. I have matched the signatures up with certified autographs I have and I am confident that these are the real deal. 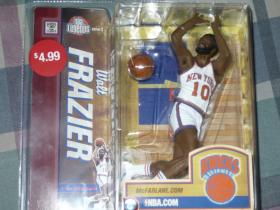 I love collecting action figures, bobbleheads and figurines. Having a classic Knick like Walt Frazier in my McFarlane collection is pretty awesome. I picked this figure up in Philadelphia, of all places. That might explain the price tag on it. 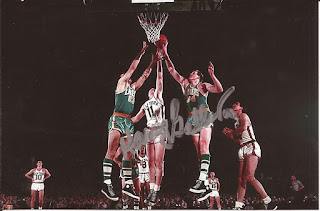 Again, I just love the classics. Harry "The Horse" Gallatin is a NBA Hall Of Famer who played for the Knicks from 1948 to 1957. He is a 7 time All Star who once pulled down a Knicks record 33 rebounds in a game. Mr. Gallatin signed this photo through the mail for me. I would love to get a mini basketball out to him very soon as I already have his permission to send him one. 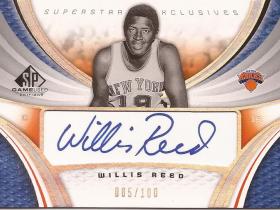 To have an autograph of the Captain of the championship teams is a thrill. I wasn't born when the Knicks won their first NBA Championship and was only 2 years old when they won their 2nd and last one, so I haven't been able to enjoy a Knicks championship. I do own the History Of The Knicks DVD set that has Game 7 of the 1969 NBA Championship in it's entirety so I can watch Reed limp down the tunnel as much as I want as well as the Knicks beating the Lakers for the title. 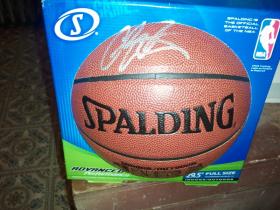 Thanks to a friend alerting me to a free signing, I was able to meet Carmello Anthony in October of 2011 at Modells in Time Square. I was shocked that it wasn't packed and was able to have Melo sign this basketball for me. It's my favorite piece in my Knicks collection and I am so very glad to have it.

With a new Knicks season, The Nets opening up the Barclays Center and becoming the first professional sports franchise to play in Brooklyn since the Dodgers left, basketball is hot in NY. Merchandise is flying off the shelves as fans are choosing sides; black and white for Brooklyn or a new blue and orange uniform for New York. As you can see, I have chosen my side along time ago and I am looking forward to 2012-13 season.