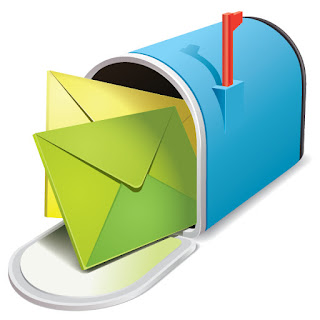 The last mail day before Thanksgiving produced some goodies for the Sports Room. 3 packages arrived in the mailbox. 1 ebay and 2 TTM's, one of which I thought I had lost. I was very pleased I got it back. I'm hoping this will lead to some of my older TTM requests to come back as well as my recent batch of requests. 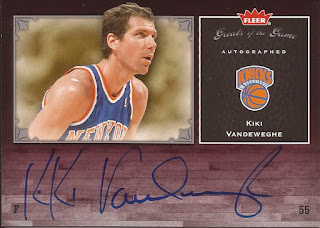 I was finally able to grab this Kiki Vandeweghe autograph from the 2005-06 Fleer Greats Of The Game. Been wanting to add Kiki's autograph to the Knicks PC for a while now and I was finally able to get this card for a great price. I've been seeing this card go for 10-25 dollars and that wasn't a price I wanted to pay. I waited it out and stole it for under 5.00 delivered.

Vandeweghe is a 2 time All Star who has played for Denver, Portland, The Knicks and finished up his career in Los Angeles with the Clippers. Kiki was an excellent scorer, averaging 19.7 points for his career. He's also coached the then New Jersey Nets and was a GM in Denver and New Jersey.

Staying with the Knicks, I got 2 photo's signed by Charles Oakley, sent care of his Car Wash in Yonkers, NY. 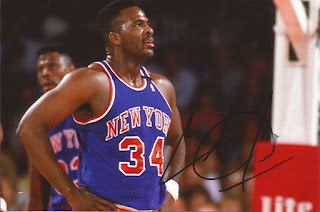 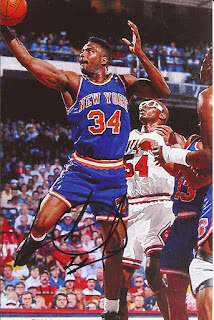 These came a lot quicker than I thought. Oak-Man's known for 30-100 day returns. These came back in 9 days. He didn't return the bookplate I sent for my Knicks book project I'm working on. I may resend with just the bookplate and see what happens.

A power forward, Oakley is best known for his time with the Knicks from 1988-1998. Oakley also played with the Bulls, Raptors, Wizards and Rockets. He was a warrior, throwing his body for loose balls and playing hurt. Oakley was the back bone of those 1990's Knicks teams and I'm very pleased to be able to add his autograph to the collection.

The 2nd TTM was a shock that I got it back, since it's was out for over a year. 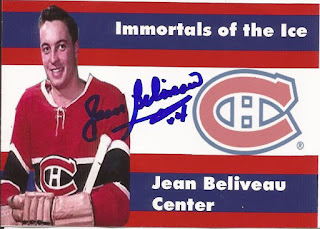 And signed a puck for me for my collection of pucks signed by players who scored 500 goals in the NHL. 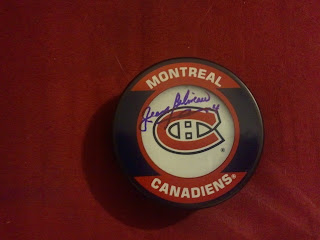 Reason why I was shocked to get this back was when I sent these out, Beliveau was a quick signer. Unfortunately, right after I sent my request out I learned he was very sick. I felt terrible for sending out my request and chalked it up as a loss. Even when I got the package, I figured someone was returning it for him unsigned. You can imagine how thrilled I was when I opened the package and saw my stuff signed.

Beliveau is considered one of hockey's all time greats. He played his entire career with the Montreal Canadiens, from 1950-1971. He is a 14 time All Star, He's won 2 Hart Trophies, an Art Ross Trophy, a Conn Smythe Trophy winner. He's second all time on the Canadiens list in points, assists and games played. He also is third in goals. He's won 10 Stanley Cups as a player and another seven times as an executive with the Canadiens. He was inducted into the Hockey Hall Of Fame in 1972.

It was a great day at the mail box. Now I can enjoy my turkey tomorrow and hope for more Friday and Saturday.

Hope you all have a great Gobble, Gobble Day. Don't drink and drive, consume mass quanties of food and enjoy football.
Posted by Unknown at 6:53 PM