Welcome Back To My Yankees Collection, Bernie Williams 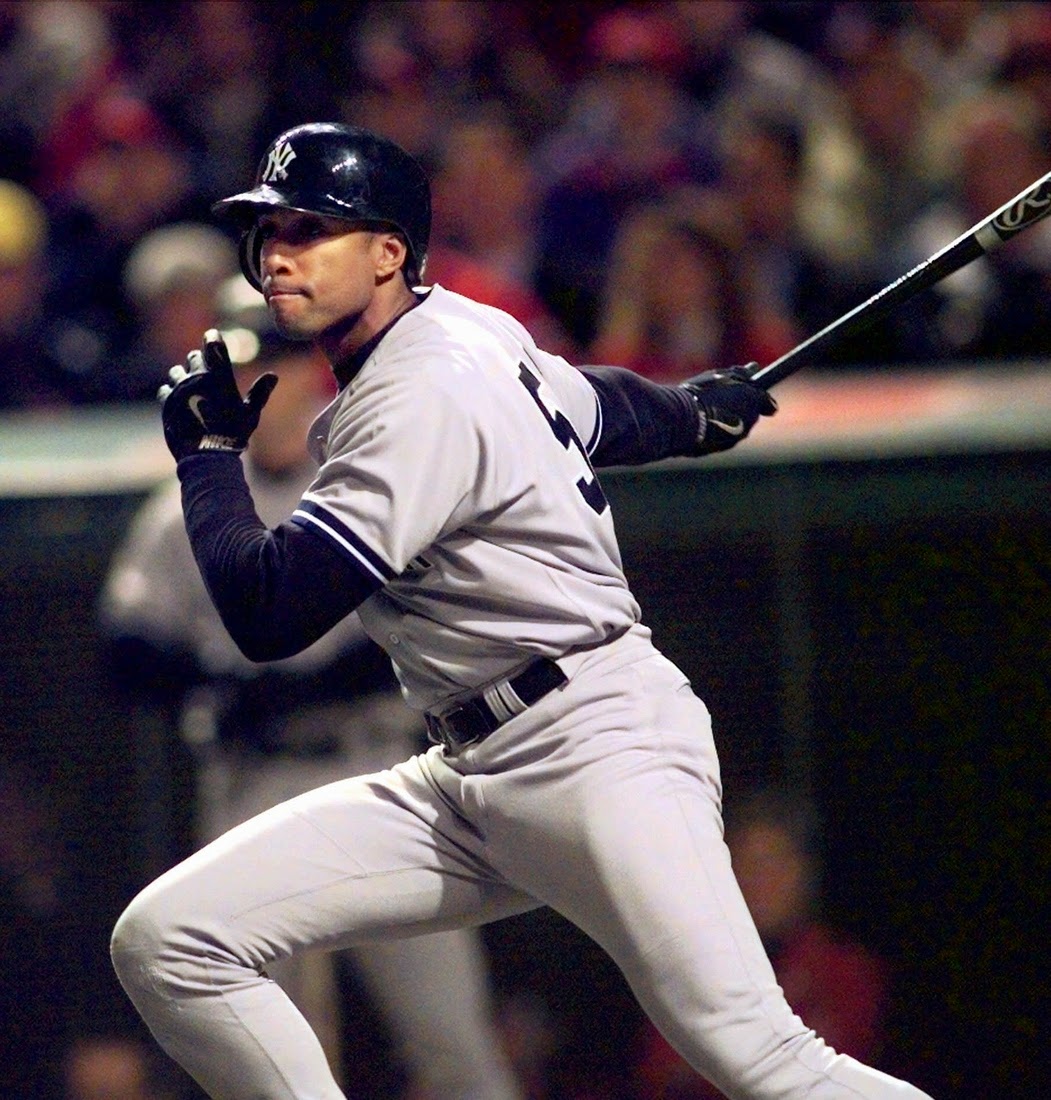 Aside from Bobbleheads, I love collecting figurines. I used to pick up every McFarlane Sports Pick Yankees figure that came out. The quality of the figures isn't as good as when they first came out and have a tendency to lean. I have a Jorge Posada that is literately using his bat to stay up. I only buy the ones I really want now.

I do love the Yankees figurines that are given out every year. ever since 2006, when the Yankees gave away a figurine of Derek Jeter in his "Jump Throw" pose, the Yankees have partnered with Sports Authority to give away these beautiful pieces, usually to the first 18,000 fans. I was at the first give away and loved the Jeter I got, which I still have. Unfortunately, the only other one I was able to go to was the Yankee Stadium give away in 2008 when I got to add a statue of the second Yankee Stadium to my collection.

A few years ago, I was able to pick up the second figurine that was given out in 2007, Bernie Williams. I actually had gotten a great deal for it and it was proudly displayed on my shelf, right next to the Jeter. Unfortunately, clumsy is my second middle name (Right after hungry) and while dusting the shelf, I accidentally knocked over Bernie and his leg went crunch.  I knew at that point it would be a while before I could pick up another Bernie statue.

Well, today I was able to re-add Bernie back to the Yankee collection. Say hello to my little friend! 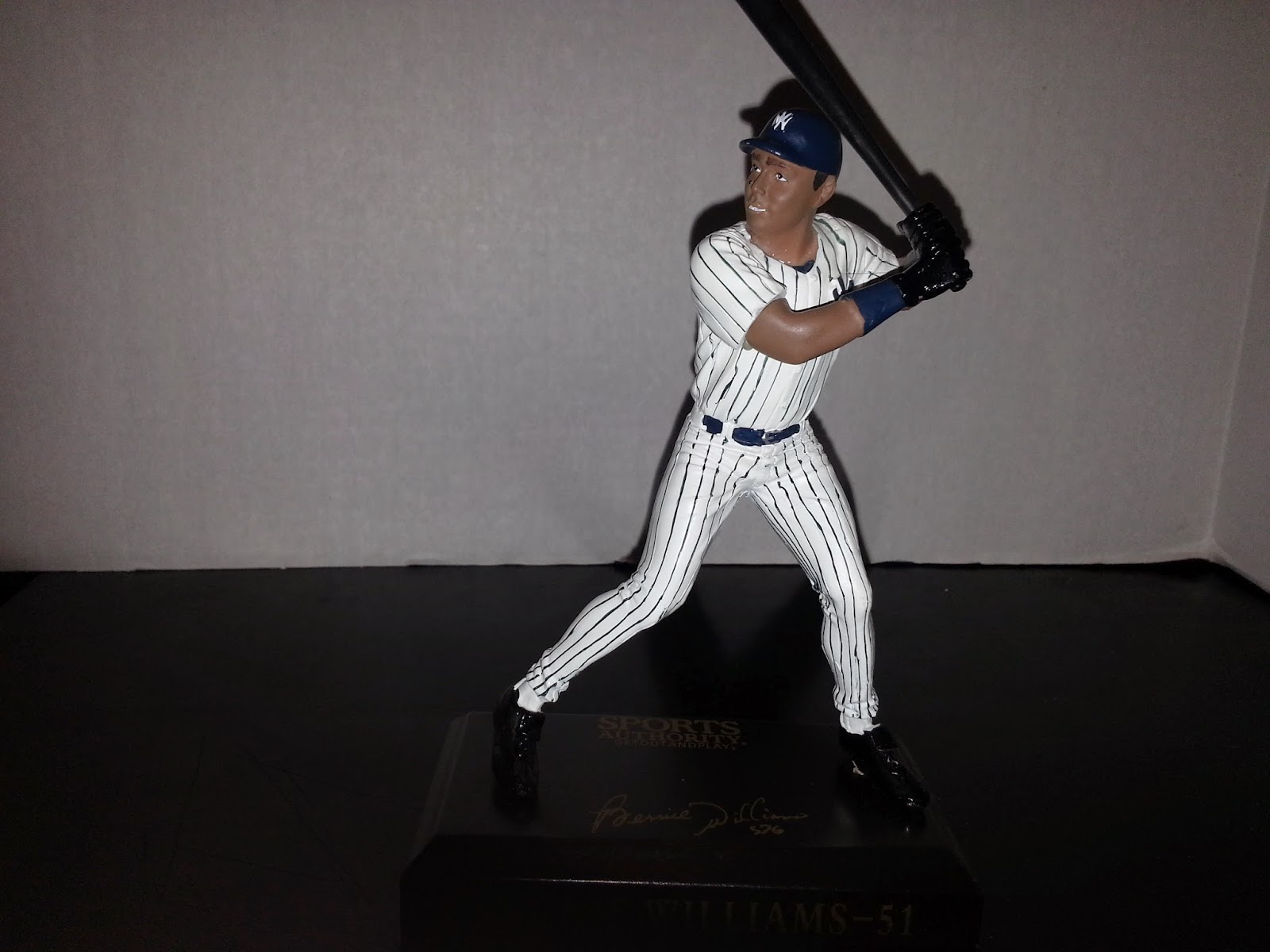 This is not a large figurine by any stretch, but it doesn't have to be. This thing is freaken killer! Love that it's in the classic Yankees home uni and Bernie is batting from the left hand side (He was a switch hitter, for the unknowing) and looks like he's about to mash a home run into the right field upper deck. 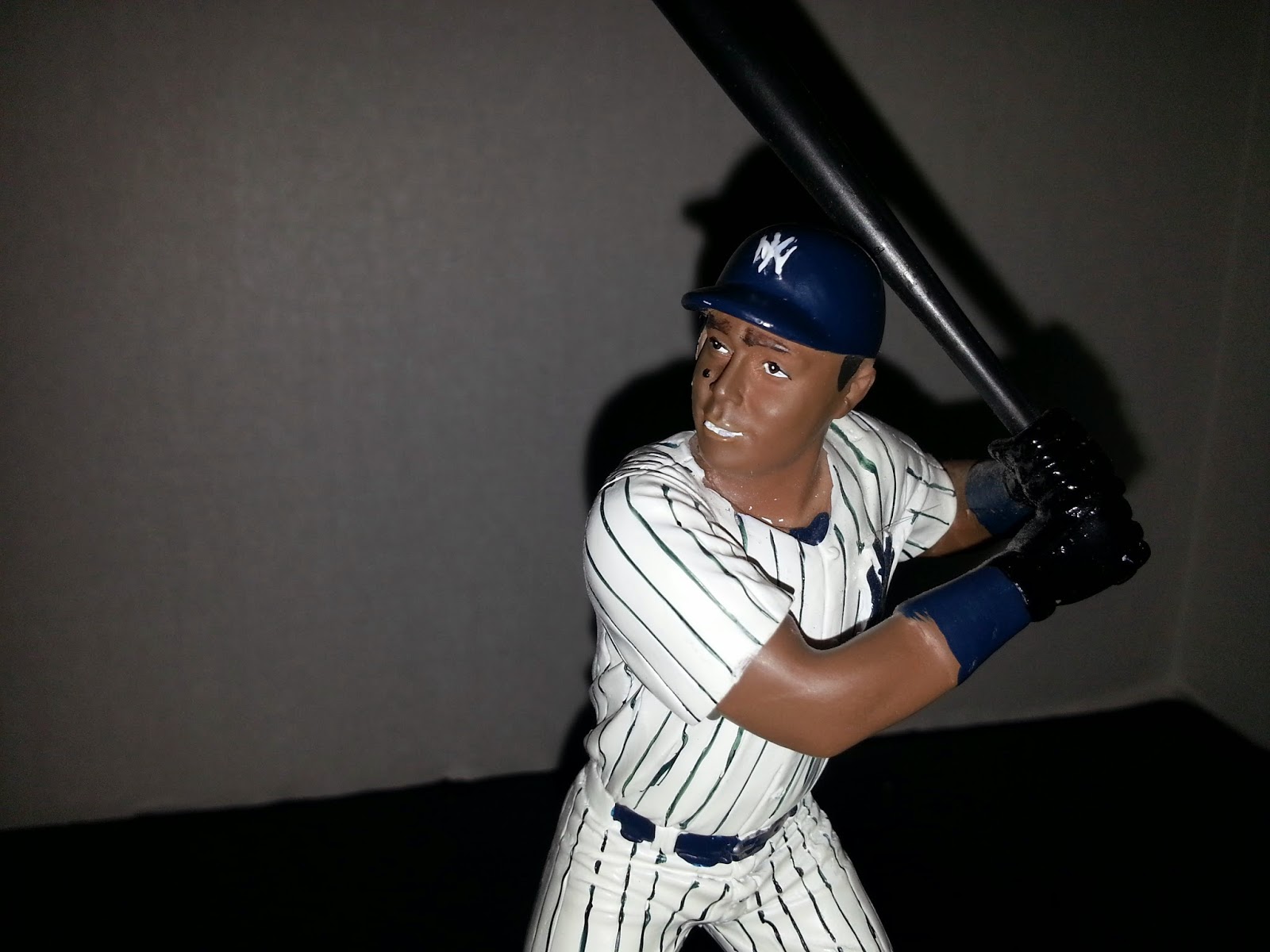 This figure was made by Alexander Global and if we know anything about Bobble Dobbles, then we know that they are close enough in the looks department. That is to say they are not 100% accurate, but close enough. This figurine is that exactly. 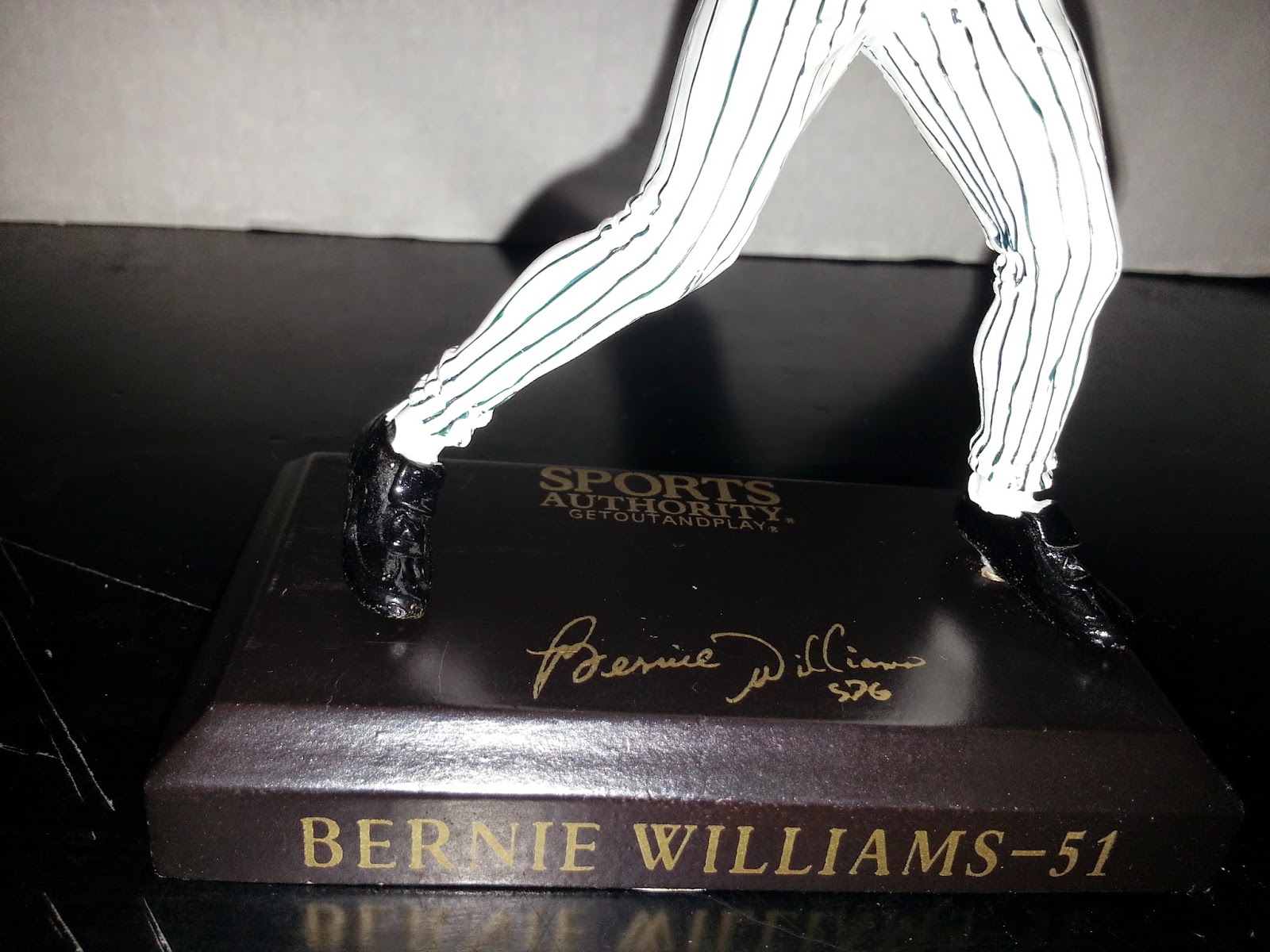 Base has the standard name of player, uniform number, sponsor and facsimile autograph. If I was into having my figurines autographed, I would definitely try to get Bernie to sign in the middle of the base in Gold Sharpie or Decco. 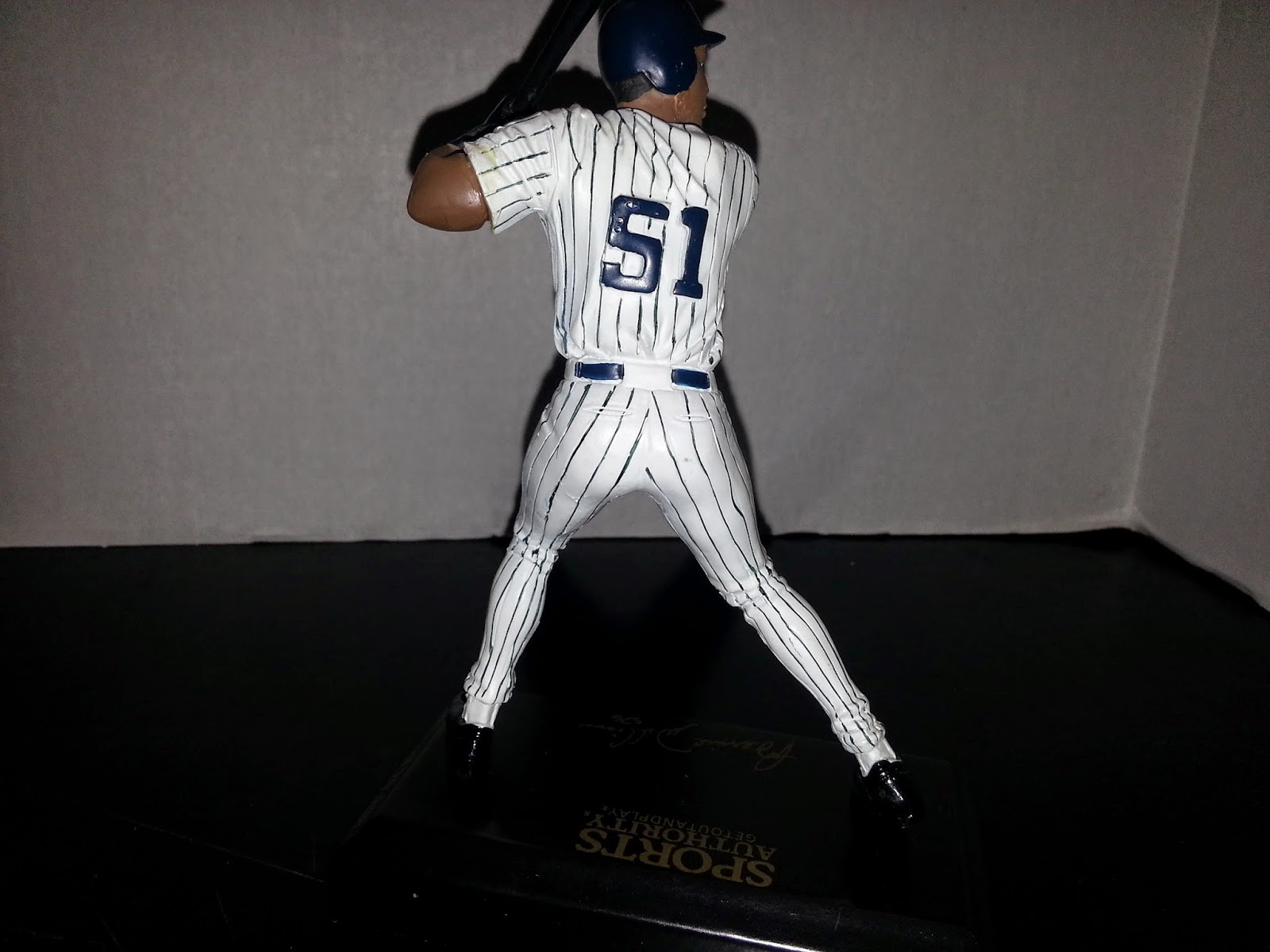 The back has that familiar number 51 that will be retired by the Yankees later this season. At first, I wasn't sure if I was ok with 51 being retired, but the more I think about it, the more I am OK with it because, my opinion only, he is the third best Yankee center fielder in their history behind Joe DiMaggio and Mickey Mantle. I'm sure that remark will spark some debates. 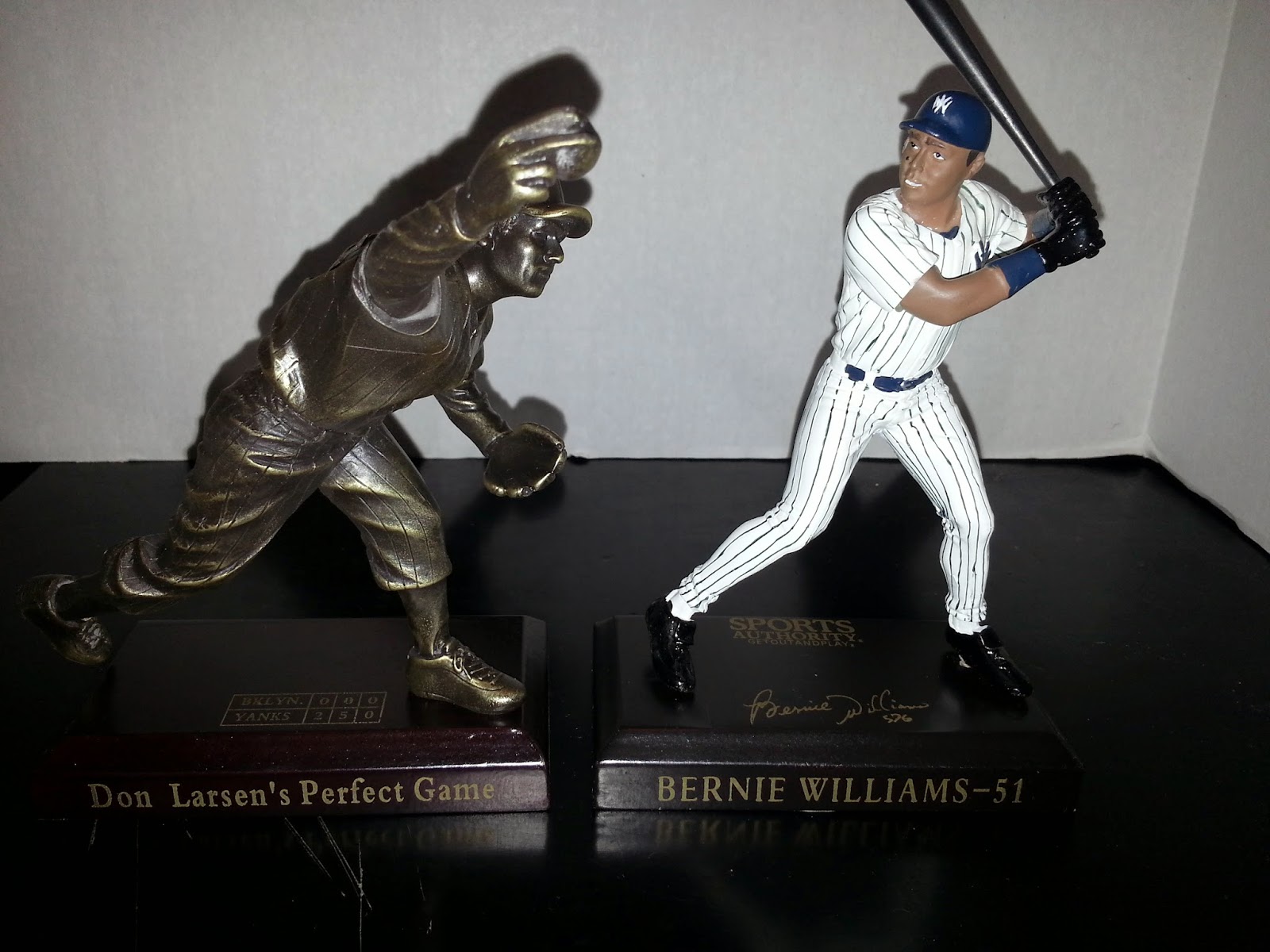 Here's a comparison with the Don Larsen statue I got at the 2013 All Star FanFest. 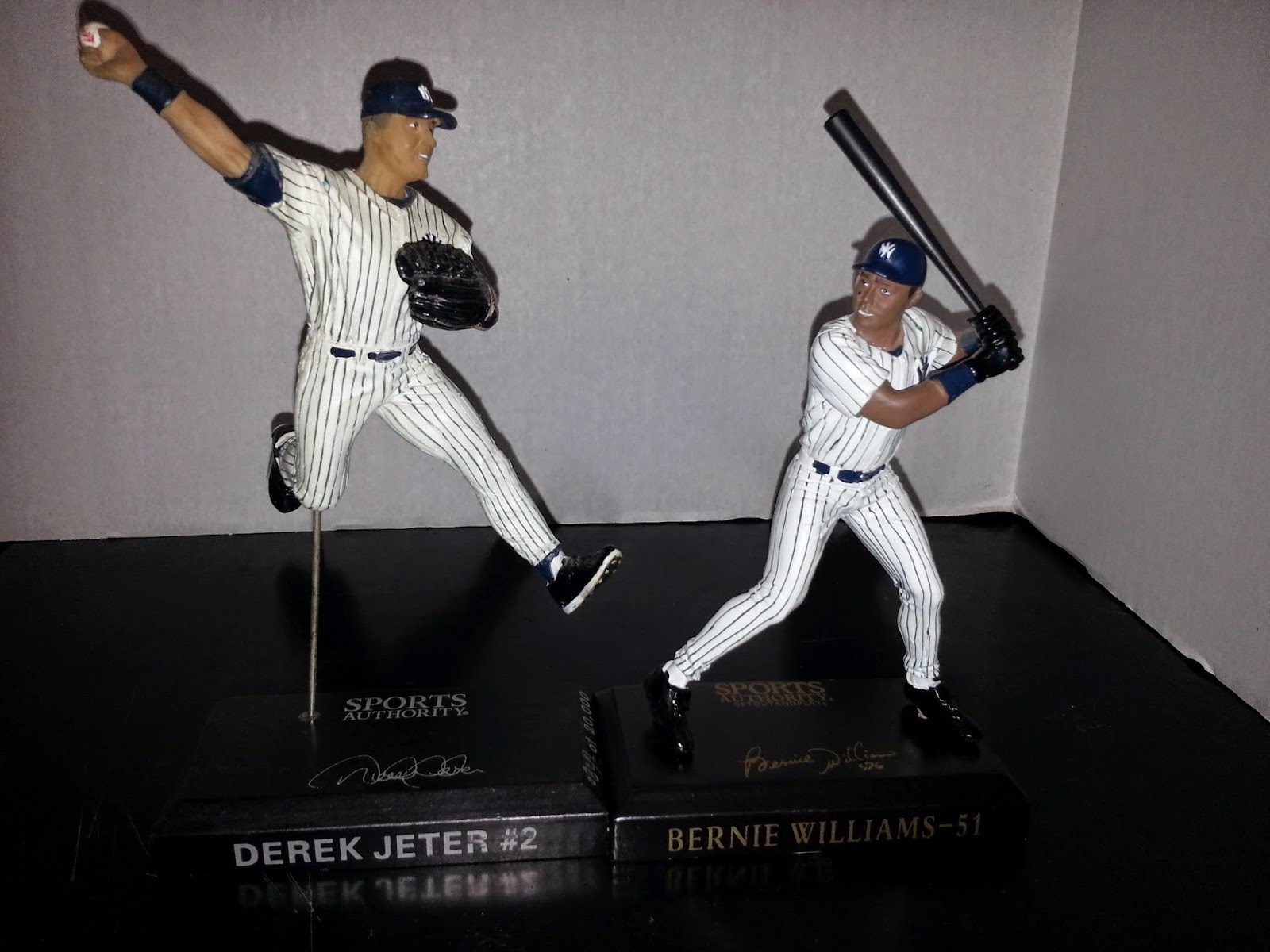 And here's the figure comparison with the Jeter figurine I got at the first give away in 2006. Remember what I said about likenesses being close enough with these? That goes double for this Jeter. Also, do not do what I did. Save the boxes, I was stupid and threw out both boxes because I needed room. I now know you should hang on to them.

Now that I have the Bernie back in my collection, I think I will be going for the others in the series. Here's the checklist:

Right now, the Teixeira and Pettitte are the more reasonably priced figurines, but with Pettitte's number also being retired this season, as well as Posada's, I can see these figurines going up in price.

I love it when I have a project to try and complete and I know there are other figurines that I will be going after. The Yankees also gave away some statues that resemble the Don Larsen I have. They were of the of players who were enshrined in Monument Park. Then, I want to grab the Heartland, Salvino and Sports Impressions (Not expensive) and Danbury Mint (expensive). Hopefully, I can grab as many of these pieces as I can and not have the dealers back the pieces away when they see me coming.
Posted by Unknown at 8:49 PM