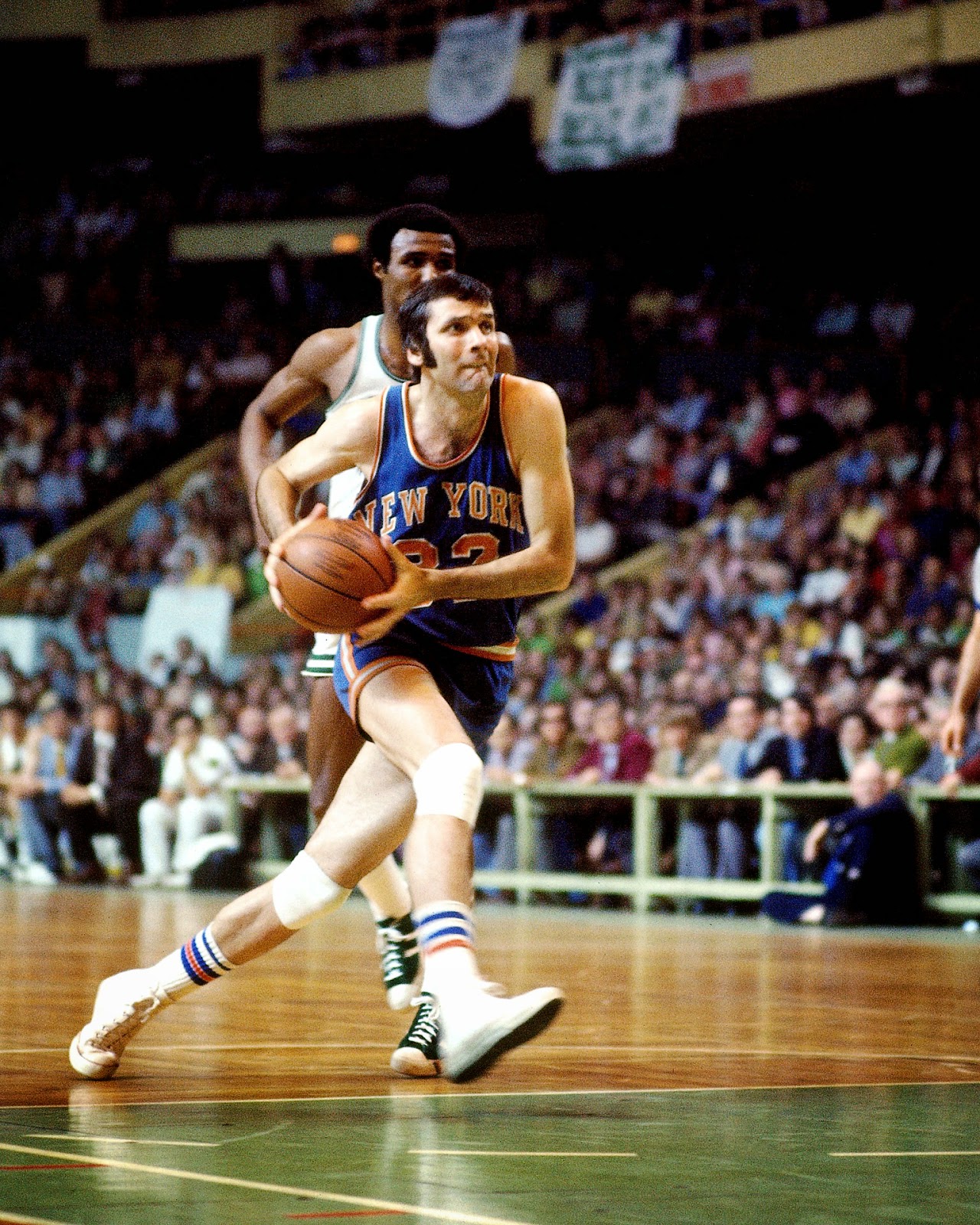 I'm a huge fan of the history of the New York Knicks, specifically their two championship teams. Back in 1969-70, the Knicks won the first of two NBA Championships. Led by the Captain, Willis Reed, Walt "Clyde" Frazier, Bill Bradley, Dave DeBusschere and Dick Barnett, The Knicks steamrolled over the NBA and beat the Los Angeles Lakers in 7 Games in an exciting series that saw Jerry West hit a half court shot to send Game 3 into overtime, Reed getting injured in Game 4 and making the miracle return for Game 7 at the Garden that shocked everyone, especially the Lakers who stopped their shoot around to watch Reed take warm ups when he emerged from the locker at MSG, then scored the first two buckets of the game before Frazier took over an dropped 36 points to seal the Knicks first ever championship.

One of my goals is to try to collect as many autographs of the players who played on those two Knicks championship teams. Today, I received another autograph to add to the collection when I got my most recent eBay win in the mail, a 2014-15 Panini Prizm Green Refractor autograph of NBA Hall Of Famer, Jerry Lucas. 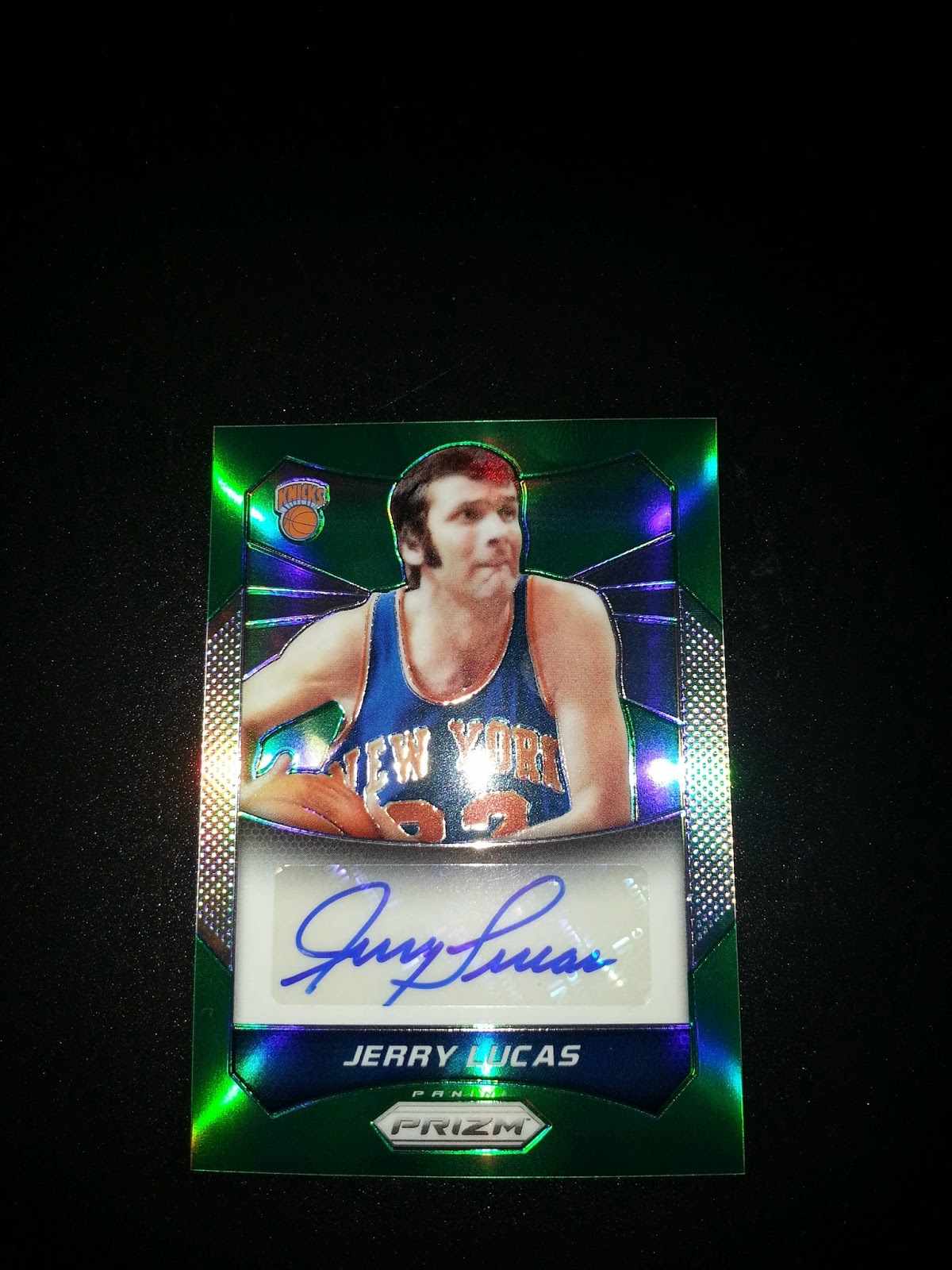 Lucas was traded to the Knicks prior to the 1971-72 season from Golden State for Cazzie Russell. He was a back up to Willis Reed, but Reed went down with an injury for the entire season and Lucas helped bring the Knicks back to the NBA Finals. Lucas led the Knicks in rebounding and was second in scoring and assists and was named the club's MVP. He would win his first and only NBA Title the next season. The Knicks made it to the Eastern Conference Finals before losing to the Boston Celtics in 5 games. After that season, Lucas retired from basketball and became an educator and a memory expert, writing three best sellers on the subject.

I have been wanting a Lucas autograph for a long time. Before his autographs were scarce and expensive. The only ones I found in my price range were his autographs on college products, which I wasn't picking up. I only wanted his autograph on a card with him in a Knicks uniform and thanks to my patience, he started signing for Panini and I was able to pick this up at a great price.

Now, I just need to find autographs of Dave DeBusschere and Bill Bradley at decent prices and I can move on to other players on those teams. There are certified autographs of DeBusschere as he signed before he passed away. Those are pricey, but  think I may be able to find one at a price I'm willing to pay. Bradley is a bit more difficult as I only seen his autograph on 2005-06 Topps Fan Favorites and that is a high dollar card. I do hope I can get lucky and snag it at a decent price, but his I may have to get on a card that is slabbed by PSA or a PSA authenticated signed book.

If you wish to learn more about the 1969-1970 and 1972-73 Knicks and have Netflix, I urge you to watch ESPN's 30 For 30 film called "When The Garden Was Eden". It's based on a book by the same name. Directed and narrated by uber fan Michael Rapaport, the film chronicles the history of the Knicks and interviews players from the two teams as well as other NBA players from that era and writers and announcers. It's a great watch from a super Knicks fan point of view. I highly recommend this if you have an hour to spare.
Posted by Yankeejetsfan at 9:08 PM