Bernie Is Not The Only New Addition. 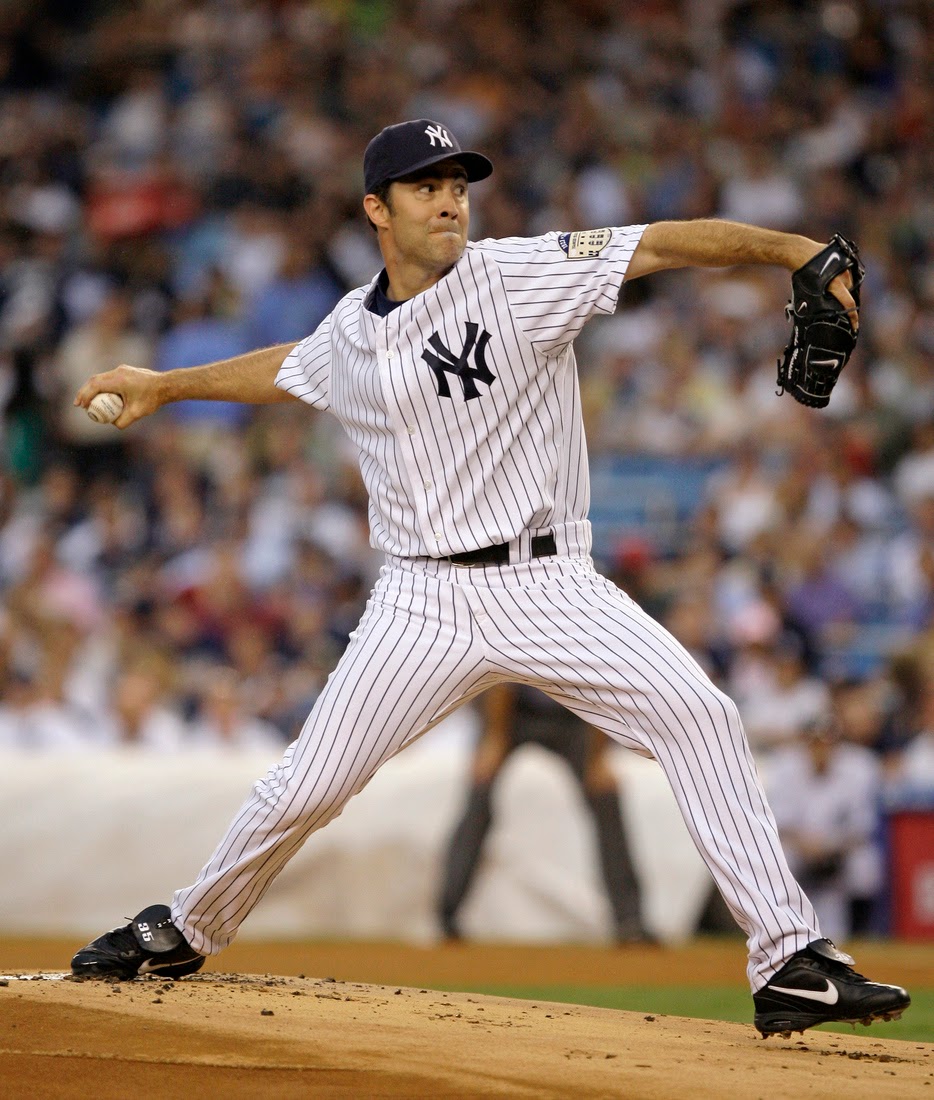 If you ask my opinion on who the best free agent signing Brian Cashman has made in his time as Yankees GM, I would say Mike Mussina. After the 2000 season, the only free agent I wanted was Mussina. The Yankees had a solid rotation of Clemens, Cone, Hernandez, Pettitte and Denny Neagle, but Cone was showing signs of slowing down, going 4-14 that season. In his walk year, you knew the Yankees would let Cone go and I was ecstatic when Moose was tabbed to be Cone's replacement.

That signing was a great one as Mussina went 123-72 in 8 seasons as a Yankee. His winning percentage in that time was .631 and he pitched to an 3.88 ERA. He also won 3 Gold Gloves and pitched in 2 World Series with the Yankees before winning 20 games in his final season in the Bronx before retiring.

As much as I liked Mussina, I never really picked up any Mussina merch. Aside from a McFarlane Sports Pick, a signed baseball and cards, there isn't a lot of Mussina in my Yankees collection. I have wanted a bobblehead of Moose for sometime, but never found one to add to my collection. 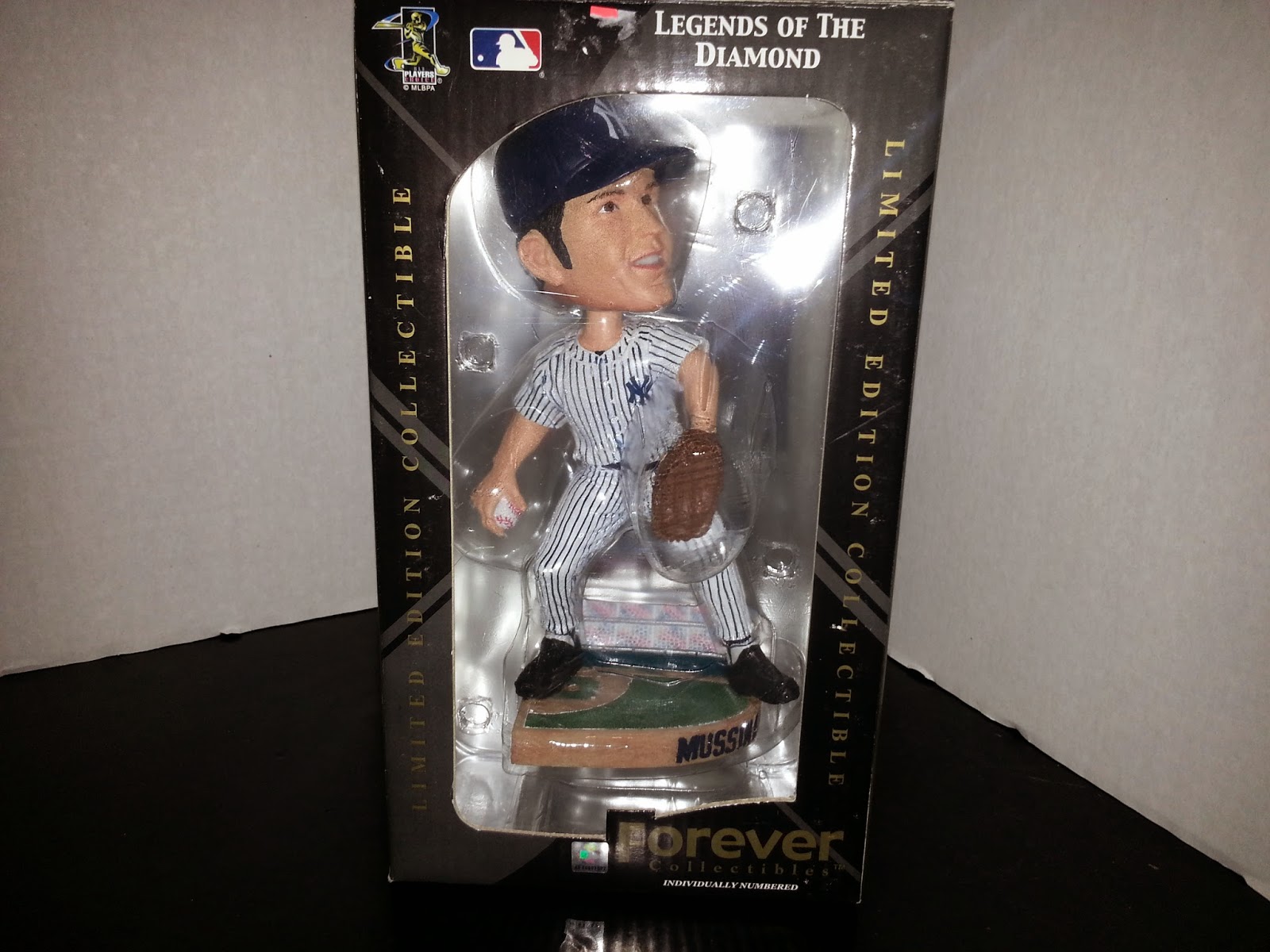 Arriving at my door the same day Bernie did was this sweet Forever Collectibles Legends Of The Diamond Mike Mussina bobblehead. This is a limited piece # to 5,000 nodders. I got 1350 of 5,000. The reason I got this was it looked a lot like Mussina. That is an area that Forever usually fails on, but here, they got the likness on point. 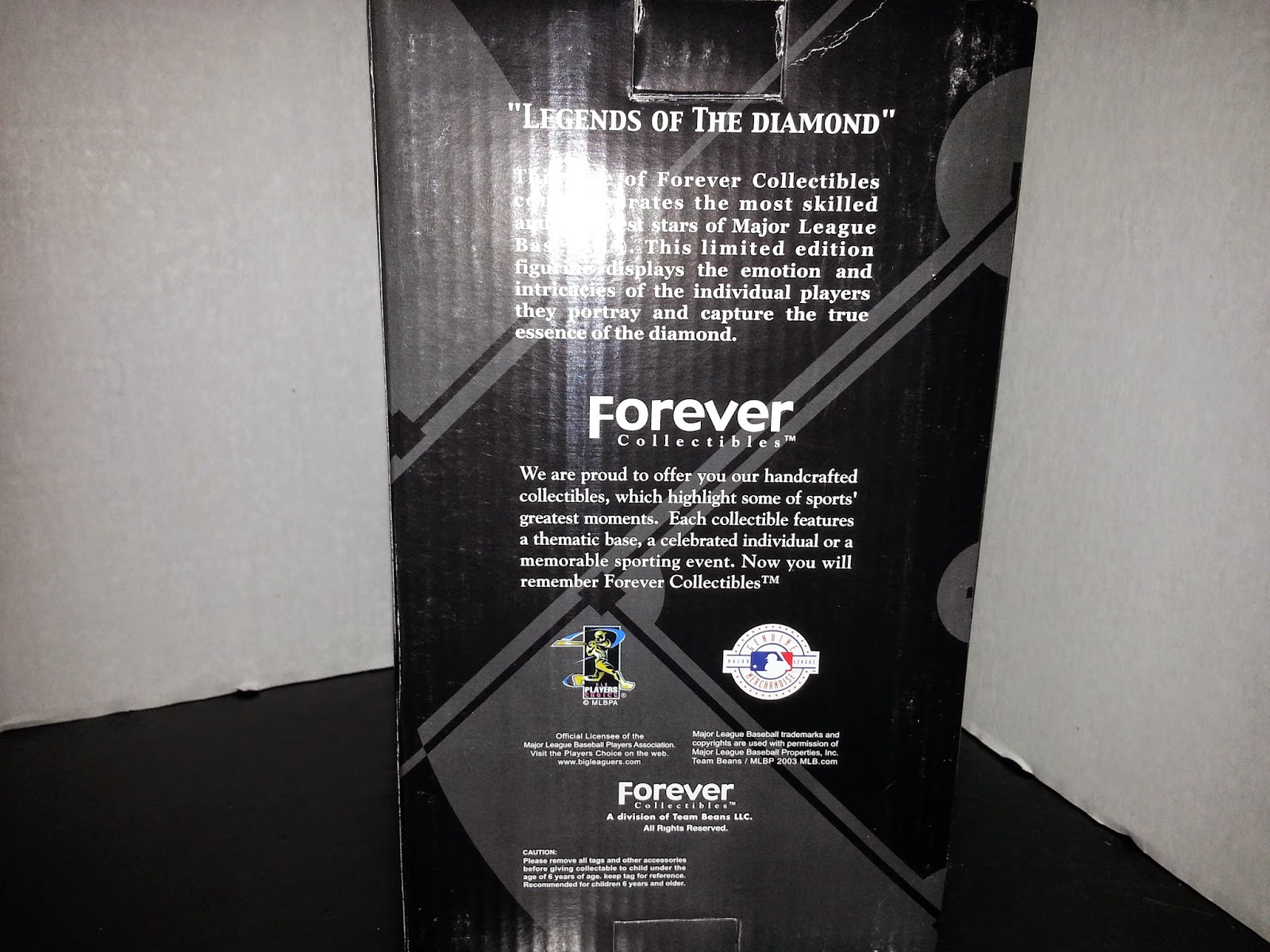 The back has a quick write up of what the Legends Of The Diamond line is all out as well as one about the company it's self. 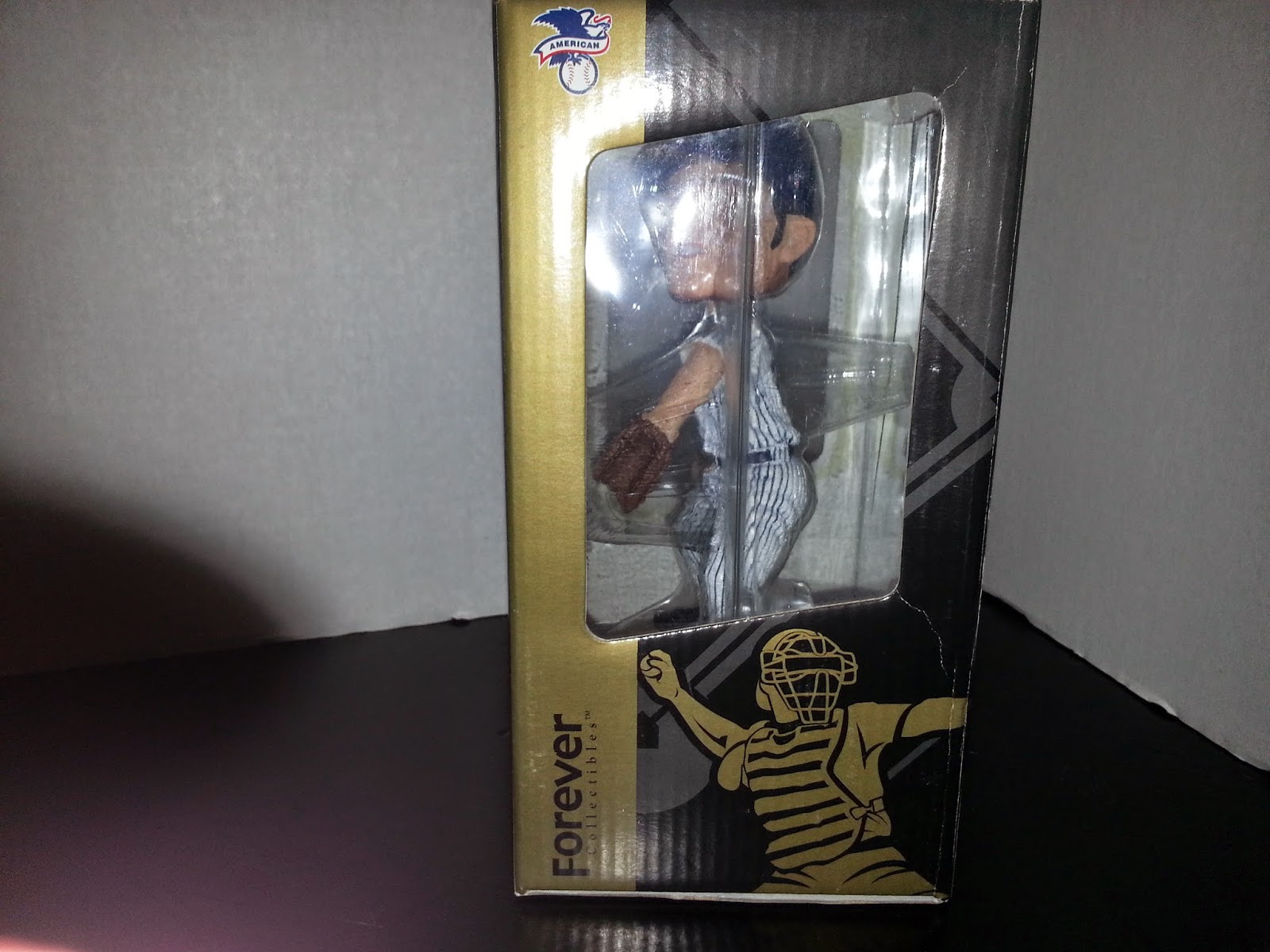 Both sides of the package feature the same art and cellophane window offering you more peeks at the bobblehead. 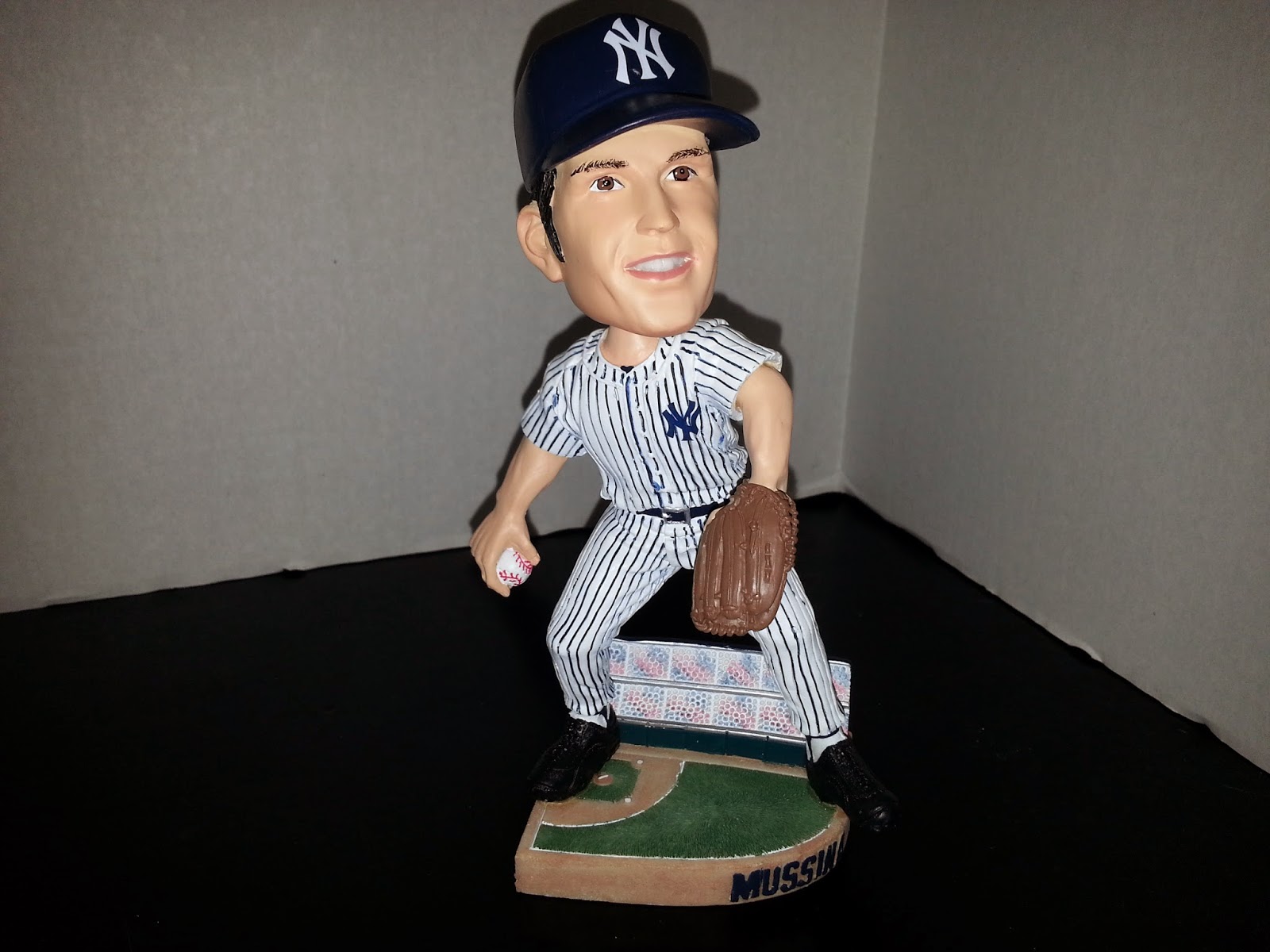 Out of the package this bobblehead looks even better than I thought. Love that it captures Mussina in mid pitching motion. Looks like he's ready to step off the mound and fire a strike to Posada. The bobblehead has some weight to it as well. 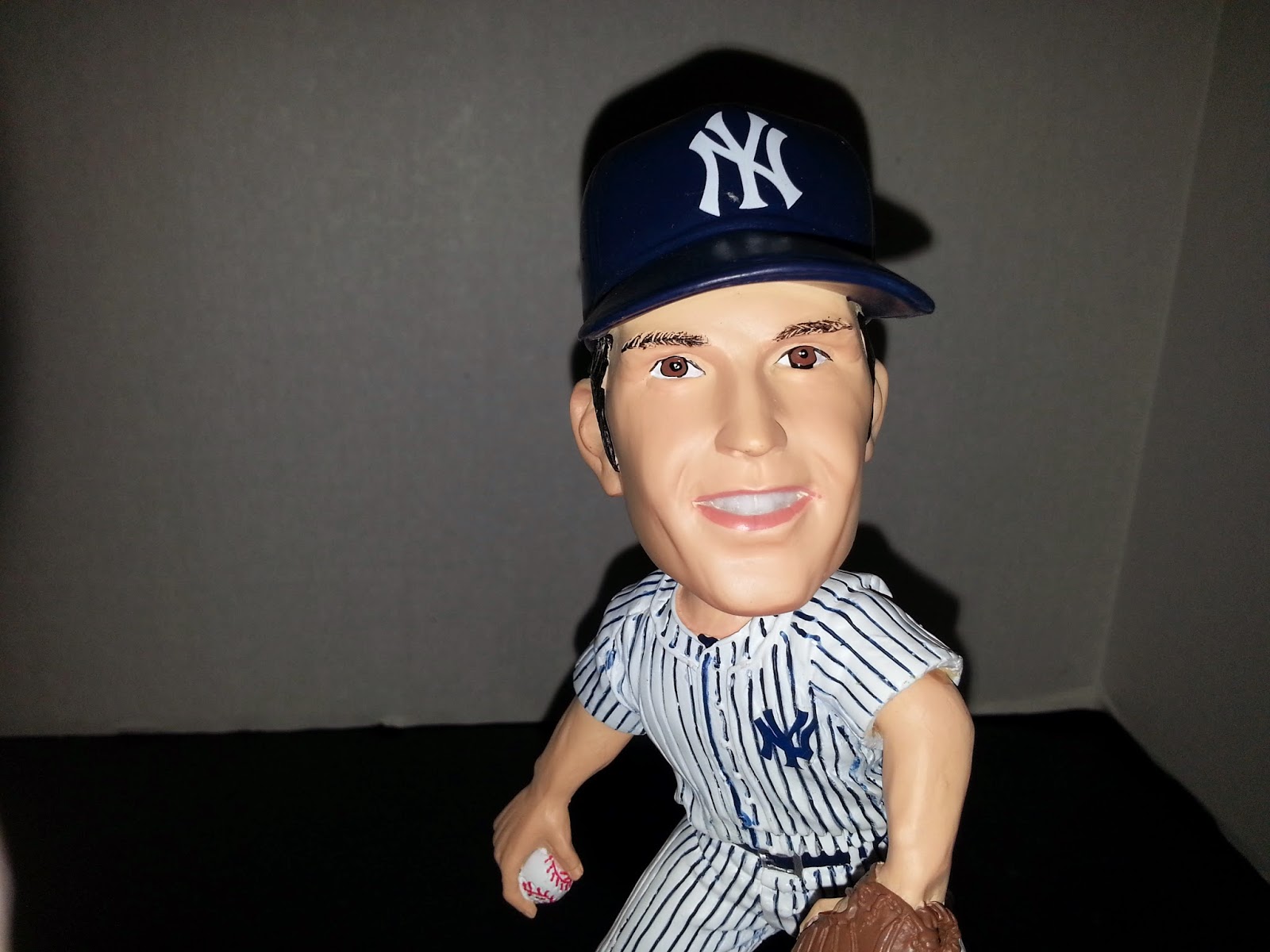 Like I mentioned before, I think Forever did a great job capturing Moose's likeness. I would probably say it looks better than most of their other efforts. I have a Forever Whitey Ford and Phil Rizzuto bobbleheads. Neither of them looked even close to the actual players. 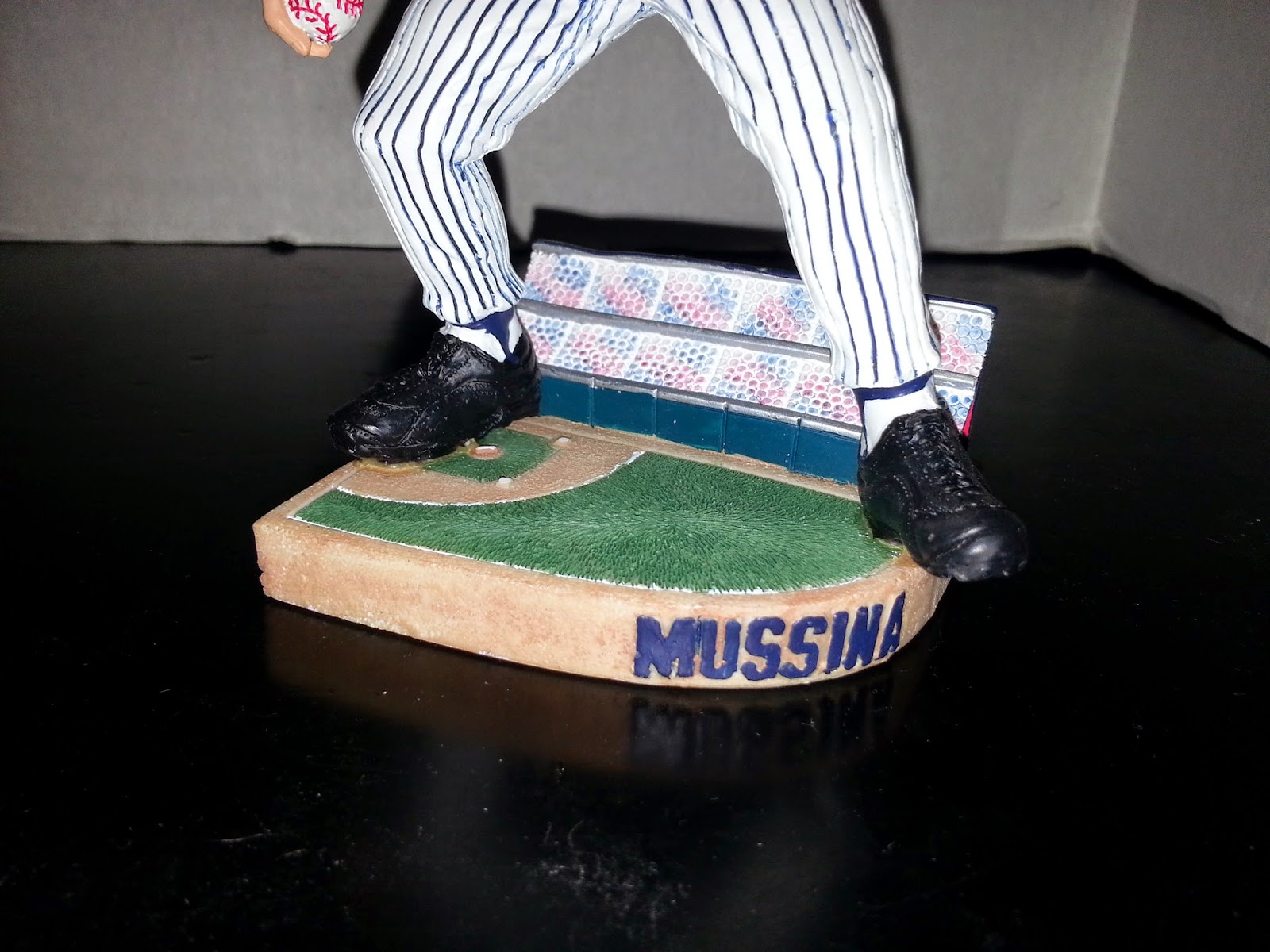 Another reason why I'm digging on this booblehead is the base. I love that it's a stadium with a diamond, grass and stands instead of a pitching mound or something. The one thing I will give Forever their due on is the imaginative bases they've used on bobbleheads and this one is no different. 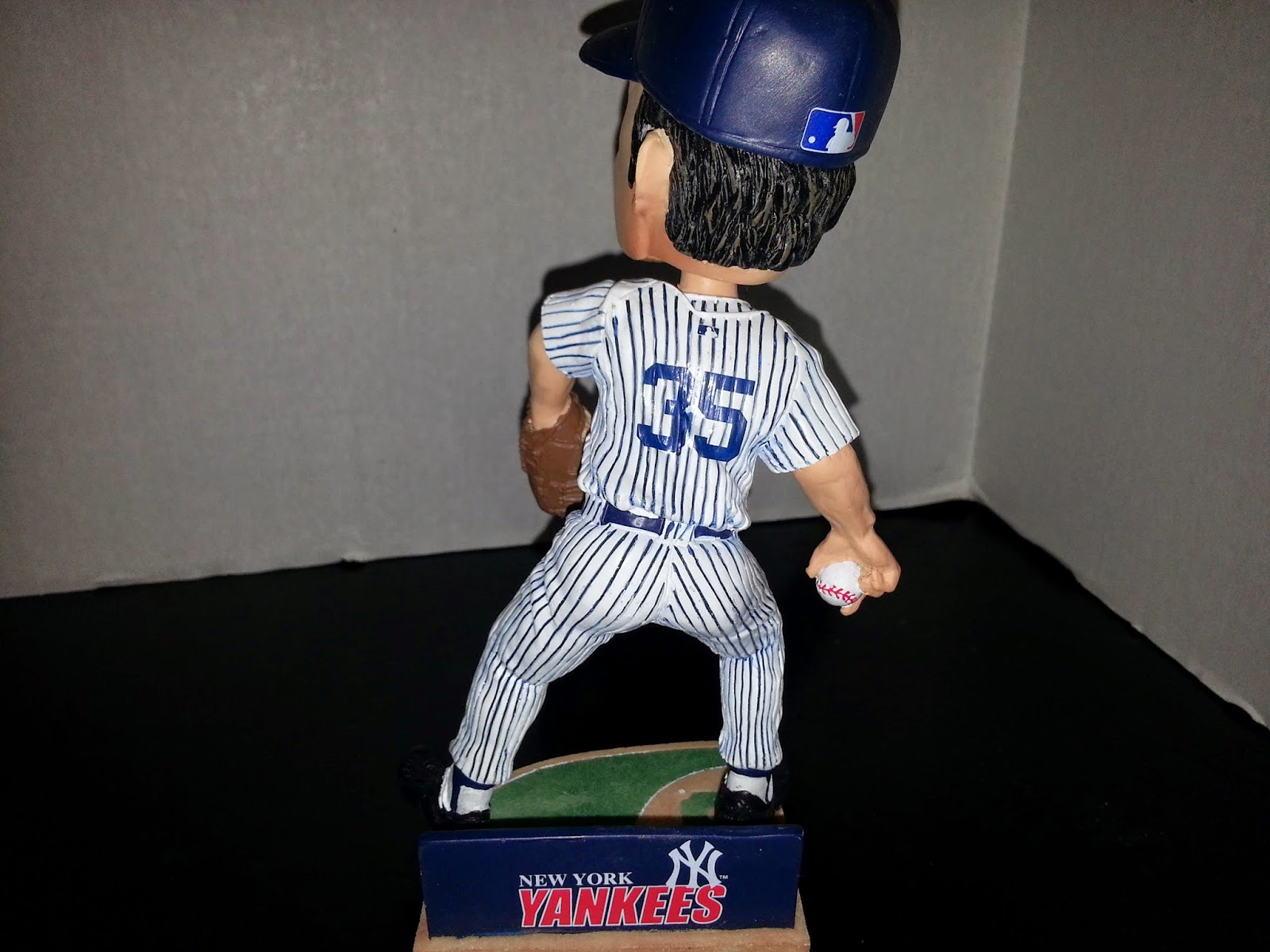 The pinstripes were painted on this bobblehead and Forever did a great job at it. The number in the back as well as the interlocking NY on the cap and front of the jersey are stickers. I really have no problem with that. I have seen the NY look so off on other bobbleheads and I would rather it look as good as possible.

I have to say that I am absolutely thrilled I now have a Mike Mussina bobblehead in my Yankees bobblehead collection. Especially one that looks as good as this one. It makes me less squeemish about adding more Forever bobbleheads into my collection. I do wish the Yankees would give away bobbleheads in this size instead of the mini ones they've been giving out the past few seasons. I almost wish Forever would start producing the give away bobbles, If the batch we get this season look anything like the Teixeira I got last season then maybe I will be wanting Forever to take over.
Posted by Unknown at 7:52 PM