The 2014-15 NHL season has been a very successful one so far for the New York Islanders. They are atop of the Metropolitan Division, a point ahead of the Pittsburgh Penguins and third in the Eastern Conference. They are one of the best teams in the NHL this season and the shock value of how good this team is has worn off and teams like the Penguins, Rangers and Capitals will be looking to knock the Islanders off the top of their perch in the second half. Now, aside from the excitement the second half of the season will bring as we well as the countdown to the final game at Nassau Coliseum, what else could possibly bring in big crowds to the Coliseum?

The Islanders announce not too long ago that there will be three bobbleheads given away in the upcoming weeks, with the first one tomorrow night. I bet these will be hot ticket items for every Islander fans as well as bobblehead collectors. I fall under both categories, so I want them all. 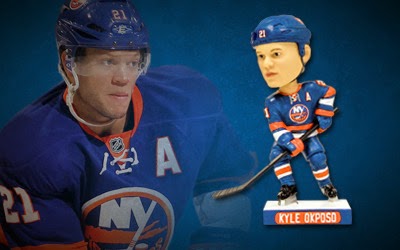 The first bobblehead being given out will be tomorrow night when the Islanders face the Columbus Blue Jackets. The Blue Jackets are near the bottom of the Eastern Conference standings, but usually pose a threat. Islanders did beat Columbus 5-2 during their first meeting back on January 10th. Okposo, who is second on the team in points, fourth in goals and first in assists, is currently out of action due to a detached retina. 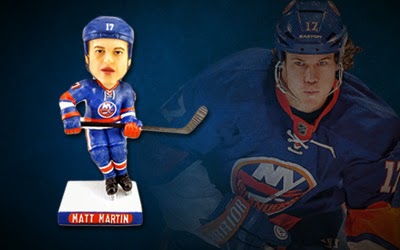 The next bobblehead will be given out in a couple of weeks when the Isles face the Carolina Hurricanes. This will be the fourth and final meeting between the two clubs. Currently, the Islanders are 2-0 against the Hurricanes this season, beating them on Opening Night, 5-3 in Raleigh and 4-3 at the Islanders home opener. Their next meeting will be in Raleigh on February 17th. On this night, the Islanders are giving away a bobblehead of their left winger, Matt Martin, one of my favorite Islanders, who holds the NHL record for most hits in a season with 374. He's also a practical joker snapping a selfie behind an unsuspecting fan wearing his jersey. 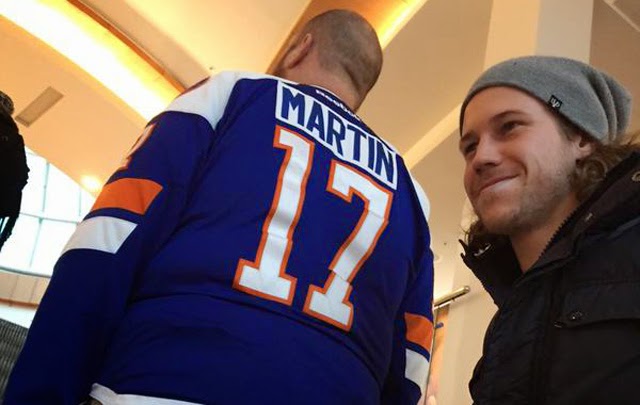 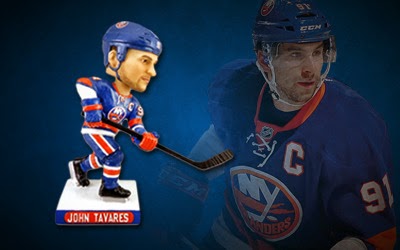 The final bobblehead will be of the Islanders Captain, and my current favorite player, John Tavares. When the Islanders announced bobbleheads, you had to know that John Tavares would be one of the ones they will be giving away. How could you not? He is currently 9th in the NHL in goals, 4th in power play goals and 8th in game winning goals. I expect him to turn it up in the second half and put up MVP caliber numbers. He may have to because this game might be meaningful in the standings. Detroit is no walk in the park, currently 5th in the Eastern Conference and 3rd in the Atlantic. The two teams have spit the season series so far at a game a piece, so both team will be looking to get a leg up in the season series.

Just by looking at these pictures, I love these bobbleheads. They look fantastic. Of course, I can't tell how big they will be. Are they full size bobbles or the mini's that teams like the Yankees have been giving out? Either way, I want them.

Unfortunately, I will be missing the Okposo give away tomorrow. Because the Coliseum is a trip and a half for someone without a car, I have to plan the trip accordingly. Transportation alone could be up to $30.00 round trip. Plus, being out of work, I cannot justify using what money I do have to go to a hockey game.

That said, I do not plan to miss the other two bobblehead giveaways. The Matt Martin giveaway will be my first ever trip to Nassau Coliseum and I will be looking forward to it. Being that I have never been to an Islanders home game before and knowing that this is their final season in Nassau before the move to Brooklyn, I will be dammed if I am not going to see a game at the old barn in their final season.
Posted by Unknown at 3:38 PM