In the team collector's group I'm a part of, our Pirate collector, Mark, who writes the great blog, Battlin' Bucs (check it out right here http://battlinbucs.blogspot.com/), asked a great question. Is there a project that you have always wanted to start, but never have for whatever reason? As soon as he asked, I knew of a few right off the bat.

1- Start A Collection Of Mascot Bobbleheads

I love mascots. I have been a fan of them for as long as I can remember and whenever one is close by, I try to get a picture with them. When the Yankees hosted the All Star Game in 2008, the mascots were all over the place at the Fan Fest, which was held at the Jacob Javitz Center. I was like a kid at a candy store, getting pictures with Mariner Moose, Southpaw and Slider, to name a few. I was disappointed that Mr. Met wasn't there. I did catch up with him later at Citi Field.

The Mets have a spot in the Kiddie pavilion in the outfield where you can meet Mr. Met and have your picture taken with him before the game. So, I went up and he was very nice to me. Gave me a hug and was ready to put his arm around me for the picture. Then my friend, who loves to stir crap up, decided to yell out "he's a Yankees fan!' Mr. Met looked at me, put his hands up, covering his eyes and shook his head. I told him that despite my allegiance to the Yankees, I still was a fan of his. Apparently, what I said did not appease him. 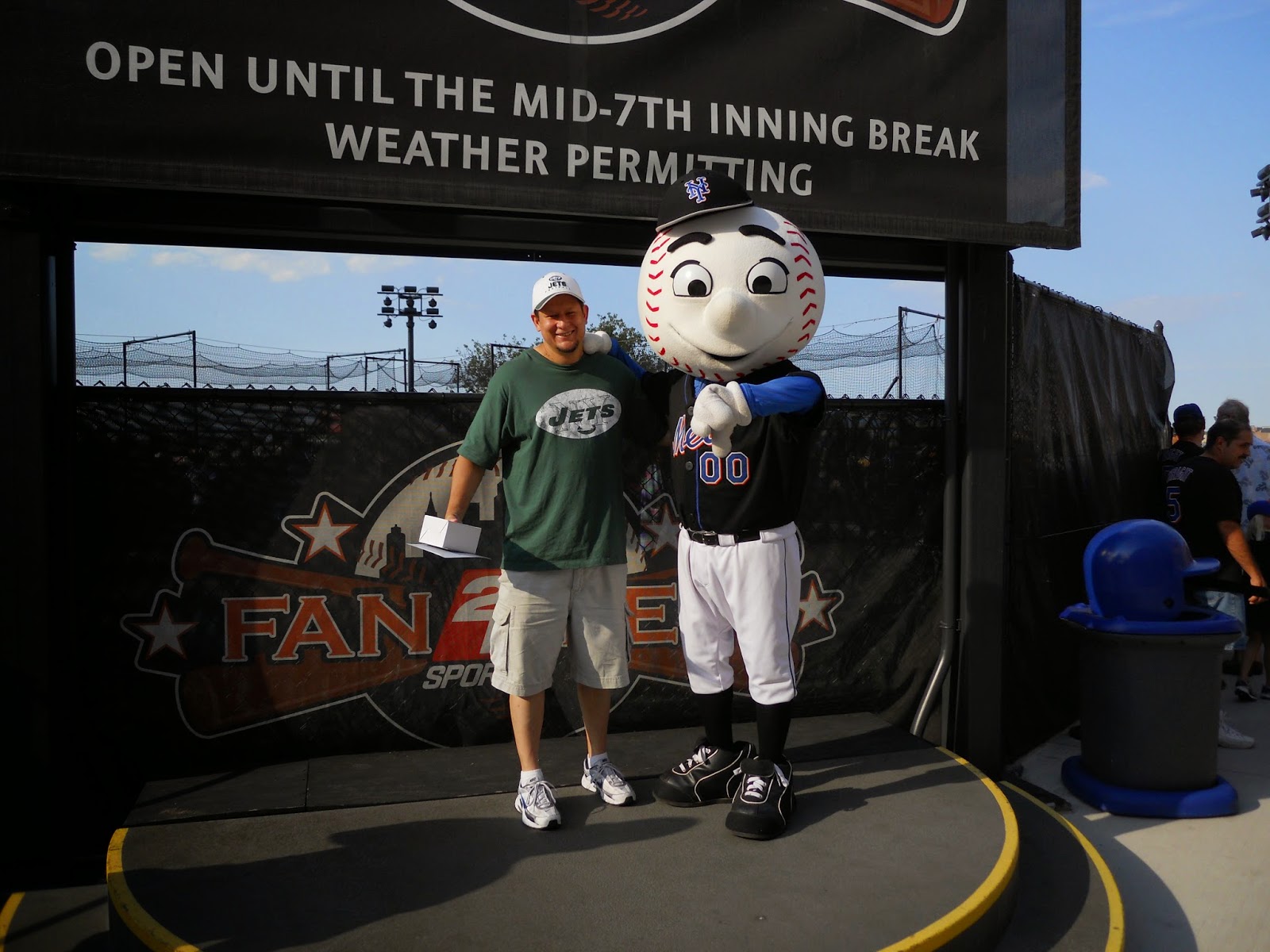 Despite Mr. Mets opinion of yours truly, I still have a couple of his bobbleheads in my collection as well as one of Mariner Moose. I would love to get a couple others. The Phillie Phanatic. Orbit, and, even though he no longer is a working mascot, The San Diego Chicken come to mind immediately. I was going to collect those Funko POP Vinyl mascots that came out last year, but I couldn't find any. The one I did find, Mr. Met, was at Citi Field and was pretty expensive.

2- Start A Bobblehead Collection Of Baseball Hall Of Fame Players

I live in New York City. I have never been to the Baseball Hall Of Fame. I know, I hang my head in shame over that fact. I plan to go one day soon and I'm hoping it's this year. Regardless, I have always wanted to start a collection of bobbleheads of players who have been inducted into the Baseball Hall Of Fame. This would give me an excuse to collect bobbleheads of some of the greatest players who ever played the game. Players like Willie Mays, Mike Schmidt, Johnny Bench, Roberto Clemente, Sandy Koufax and Tony Gwynn would all be able to be bought by me and added to a Hall Of Fame shelf or display case.

I do realize that I will have to add players from the Boston Red Sox. Player like Cy Young, Jimmy Foxx, Ted Willams, Yaz and Pedro Martinez would all have to be added to my Hall Of Fame collection. To be honest, I don't have a problem with adding Red Sox players because I plan to have a non biased Hall Of Fame collection. I will admit that I will have a problem with adding Pedro though. I really don't like him, lol.

My only prerequisite would be the bobblehead would have to match the cap the player went into the Hall with. So, even though I would love to have a Yankee Dave Winfield bobblehead in the collection, I would have to pick up his San Diego Padres bobblehead. There are players like Greg Maddux and Catfish Hunter I could take liberties with since they went in with plain caps. I will probably add the managers as well. The announcers may have to wait, depending on room.

I have long admired those who had the skills to take a figure or figures, rearrange parts, paint them up and create a fantastic figure for their collections. I've seen people do the same with bobbleheads. They will paint the figure into different uniforms, either print out the logo or use clay and have a totally different bobblehad.

My problem is I cannot paint to save my life. I have messed up walls. There is no way I can sit down with something a lot smaller and have something that looks like the awesome customs I've seen on forums like Spawn Boards and Jomo's Customs. I may make an attempt sometime soon. Depending on how good it comes out, it may never see the light of day.

4- Have My McFarlane Sports Picks Autographed

As an autograph collector, I am always looking for different ways to add unique autographs to my collection. A few years ago, I had the idea of paring autographs with McFarlane's Sports Picks figures I collected. I usually only collect Yankees, Jets, Knicks but I would pick up one if I got an autograph of a player who a had figure.

I was having trouble figuring out what to get signed to pair with the figure. I tried baseballs and that didn't work. I tried index cards and I couldn't figure out a nice way to display the two together. Certified cards didn't work for me either.

Then one day, I was at a card show and was looking at a few Salvino statues that I was interested in and it hit me.  I could get a "plaque" of some kind and have it attached to the front of the base of the figure and display it that way. Gosh, I thought I was a genius, strutting around the floor for the card show in a way that would make Ric Flair and Tully Blanchard proud. Then, I got on Jomo's Customs for the first time and saw that others had done it before. And actually figured out how to do it too. My ego deflated pretty darn quick.

Some customizers and collectors have the bases signed or they create special bases with a spot for signatures. For me, I like to have the autograph to be easily seen and if I have the figures on a shelf, you might not be able to see the autograph. The idea I like best is to use these: 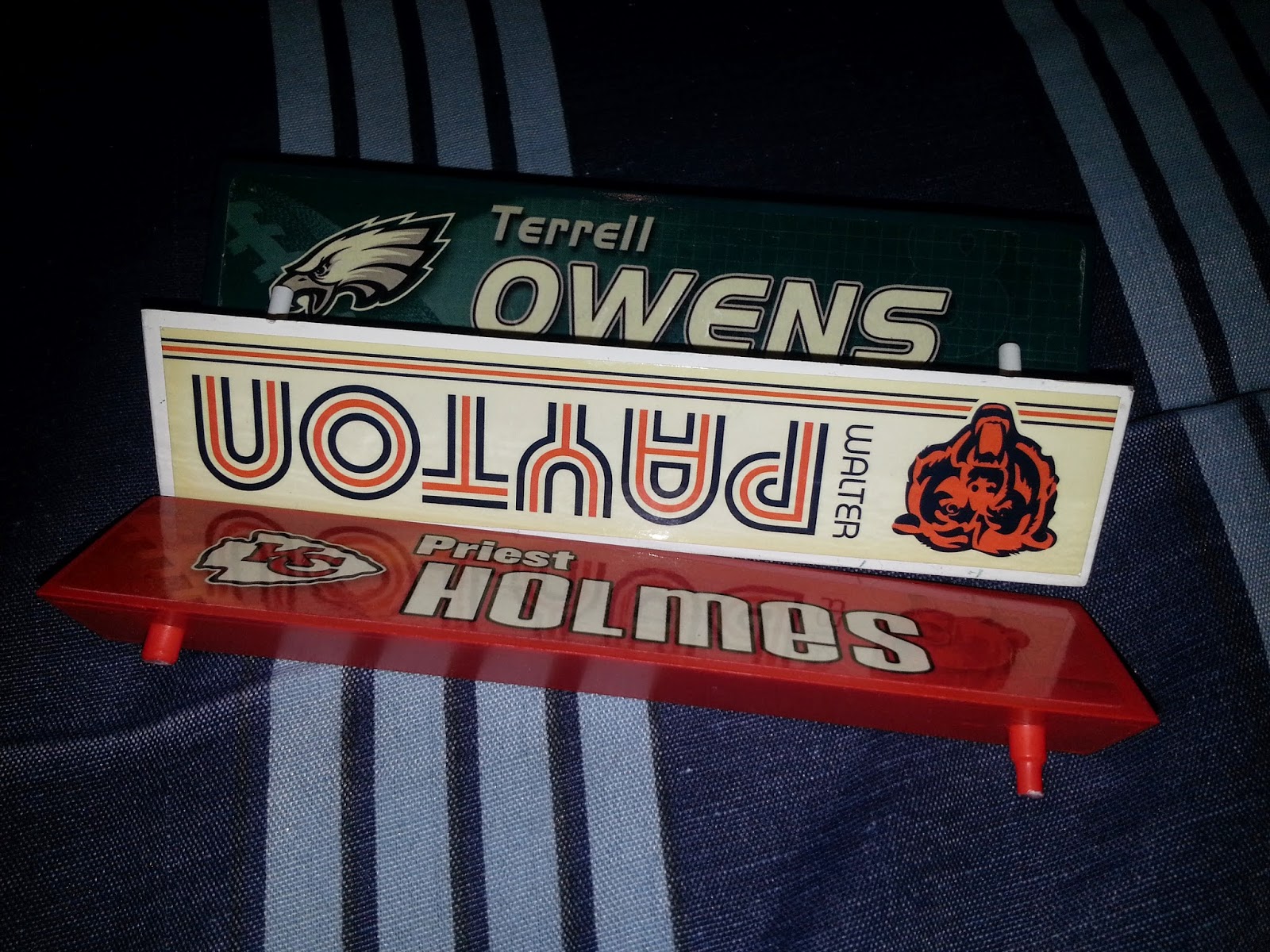 These are the name plates (I think that's what they're called) from the old 12 inch McFarlane's. I have seen customizers print out their own stickers for these, with a spot for the player to sign. Usually, the customizer will also customize the figure, but until I have the guts to try one, I will stick with SP's that have already been made. My problems are I don't know the dimensions of the stickers and my photoshop skills aren't the best. I have made some custom cards before, but never a sticker. If I can find out the dimensions of the sticker, I will be in business.

Just that one question got this ole brain of mine thinking. I'm always looking for ways to kill time as the older I get, the more at home I am. I grew up with an arts and crafts bug building model kits, drawing pictures, among other things. I would love to figure out a way to bring that side out of me and start some pretty cool sports related projects. Then maybe I will be able to buy stuff at Michael's and not just wander the aisles, having the employees give me the "he's a shoplifter" eye.