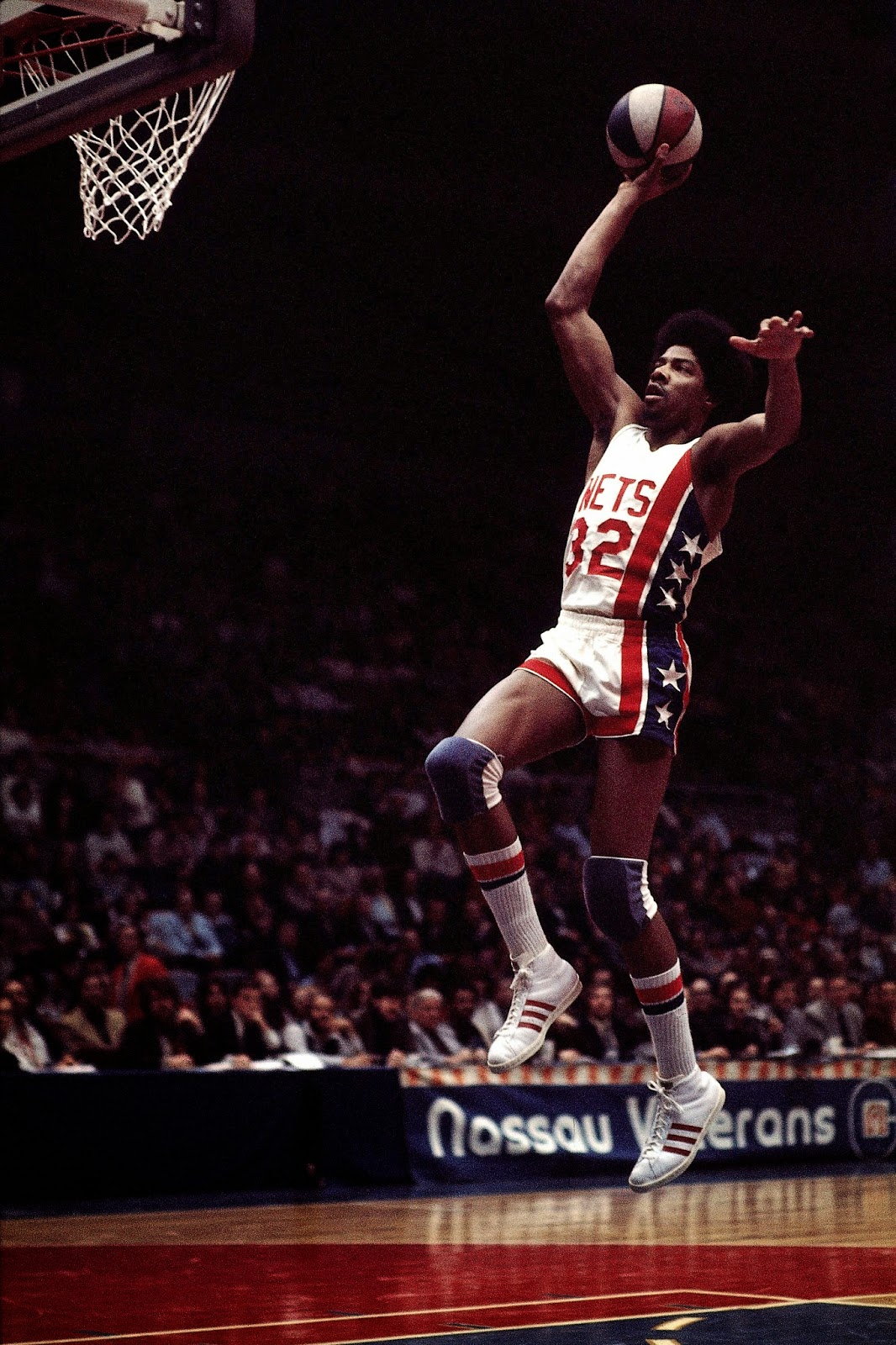 Ah, Valentine's Day. The day when many people stay with their loved ones, having a romantic day. Going out to dinner or a movie or just staying in the company with their one true love. Well, this Sexy Geek decided that while many were snuggled with their better half's, I would brave the 20 degree temperatures and snow and meet one of the greatest basketball players who ever lived. That would be Dr. J himself, Julius Erving.

Dr. Jay was making an apperance at Harman NYC as part of the NBA All Star Weekend. The All Star game is being held this year at Madison Square Garden as part of a joint venture of the Knicks and Brooklyn Nets. Many NBA players have been making apperances all over New York City these few days and although I was tempted to meet a few of them, only Dr. J could get me out of my warm home and into the colder elements to grab an autograph. So, a I hastily printed out a 11x14 photo (The one above) and off I went.

Harman is located on Madison Ave and 54th street. It was pretty easy for me to get to as I used to work not too far from there. When I got there, I was shocked at how few people there was lined up outside. I made it a point to arrive at least 2 hours early to beat the crowds. When I got on line, the store staff was ushering the graphers inside the store. Once inside, we waited in a designated area while being served pastries and hot chocolate. 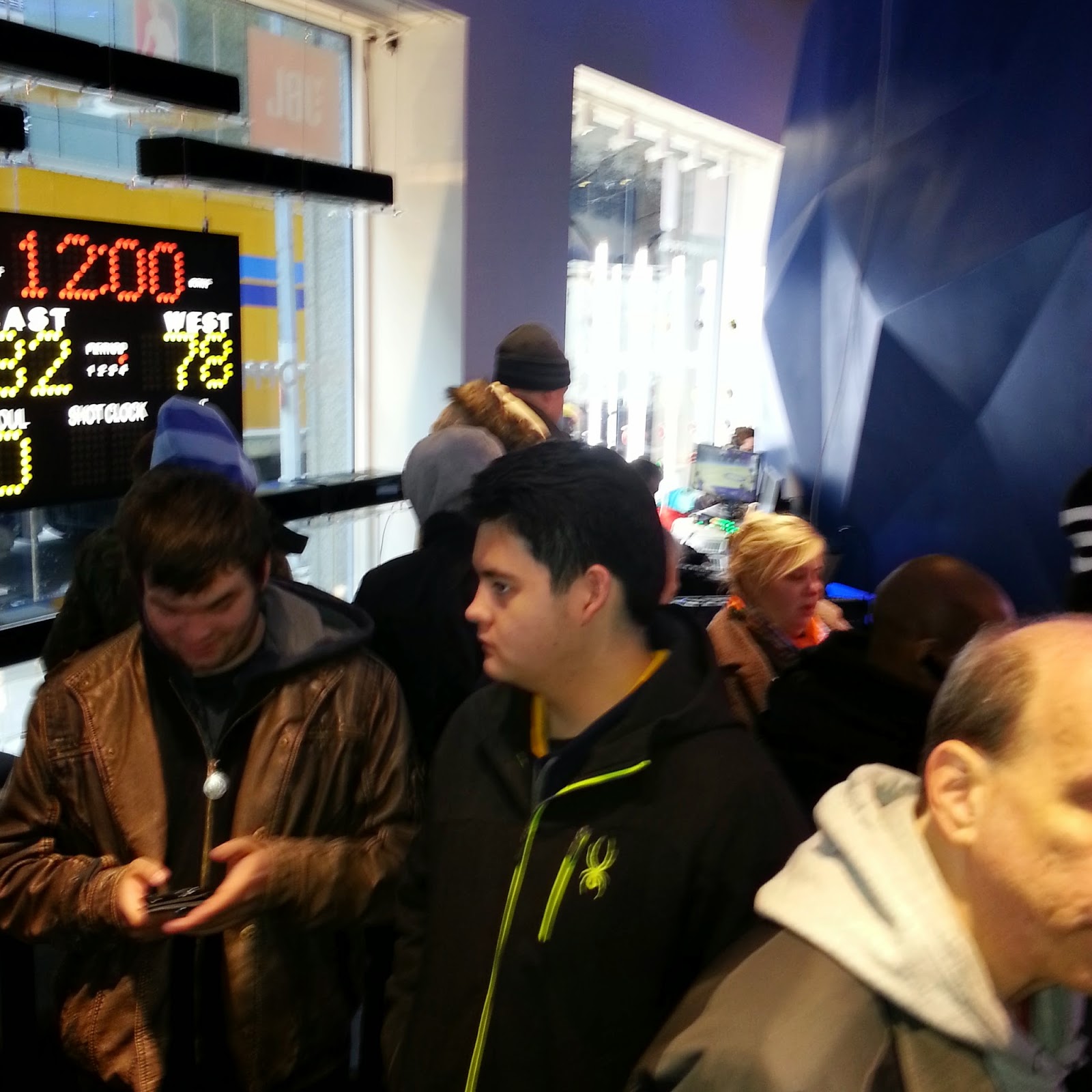 The group of graphers were the usual suspects I see at almost every event or outside any stadium or hotel I have gone to graph at. I made small talk with a few I knew and read my tablet while waiting for the festivities to begin. I'm currently reading "The Best In The World..At What I Have No Idea" written by one of my favorite wrestlers, Chris Jericho. His previous two books were smart, funny and highly entertaining and so far his third offering has not disappointed. 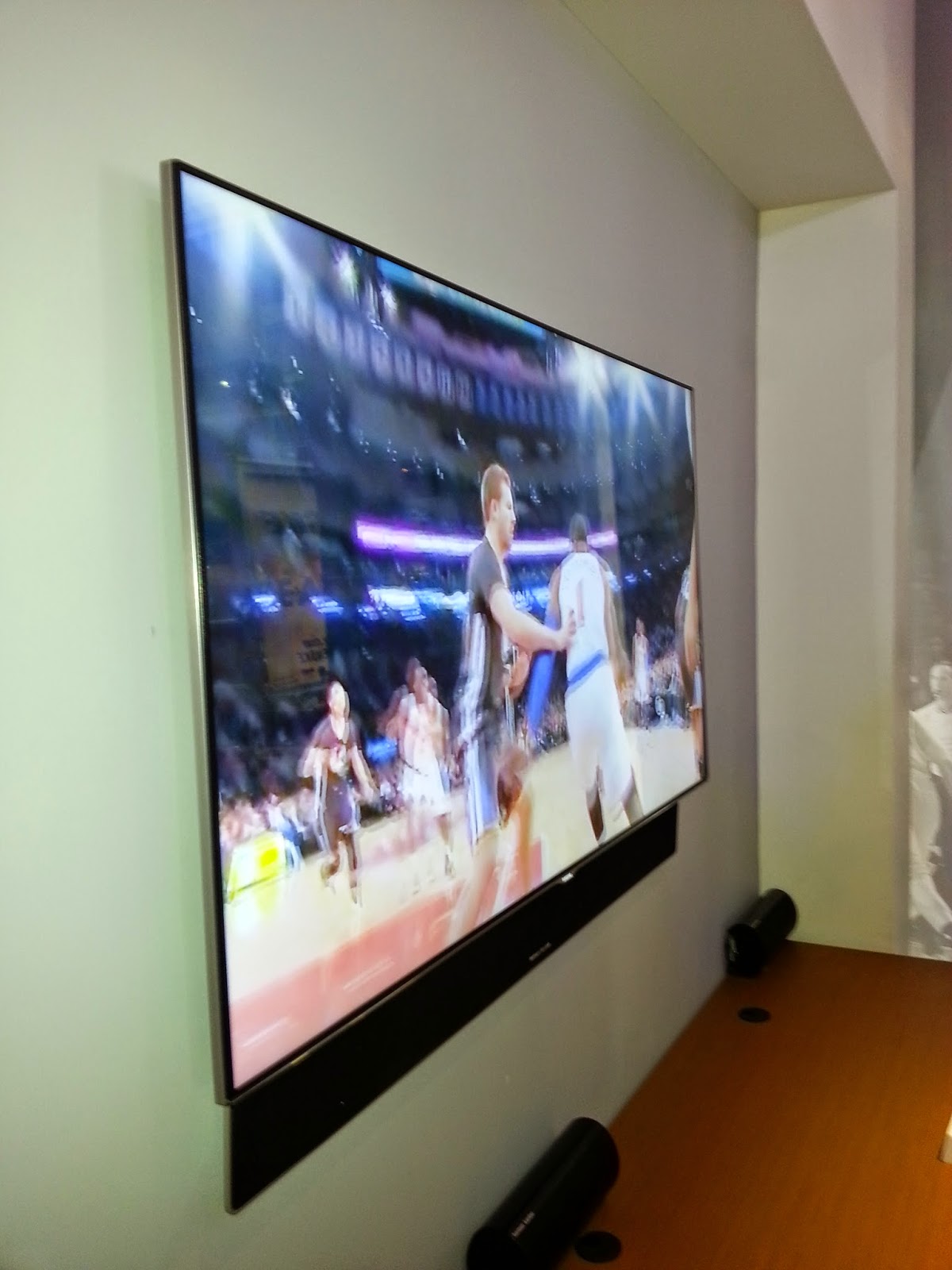 If one wishes, they could have watched NBA highlights while waiting in line. Of course, they were the same 5 minutes of highlights on a continuous loop that was replayed over and over. That get's pretty old pretty fast. 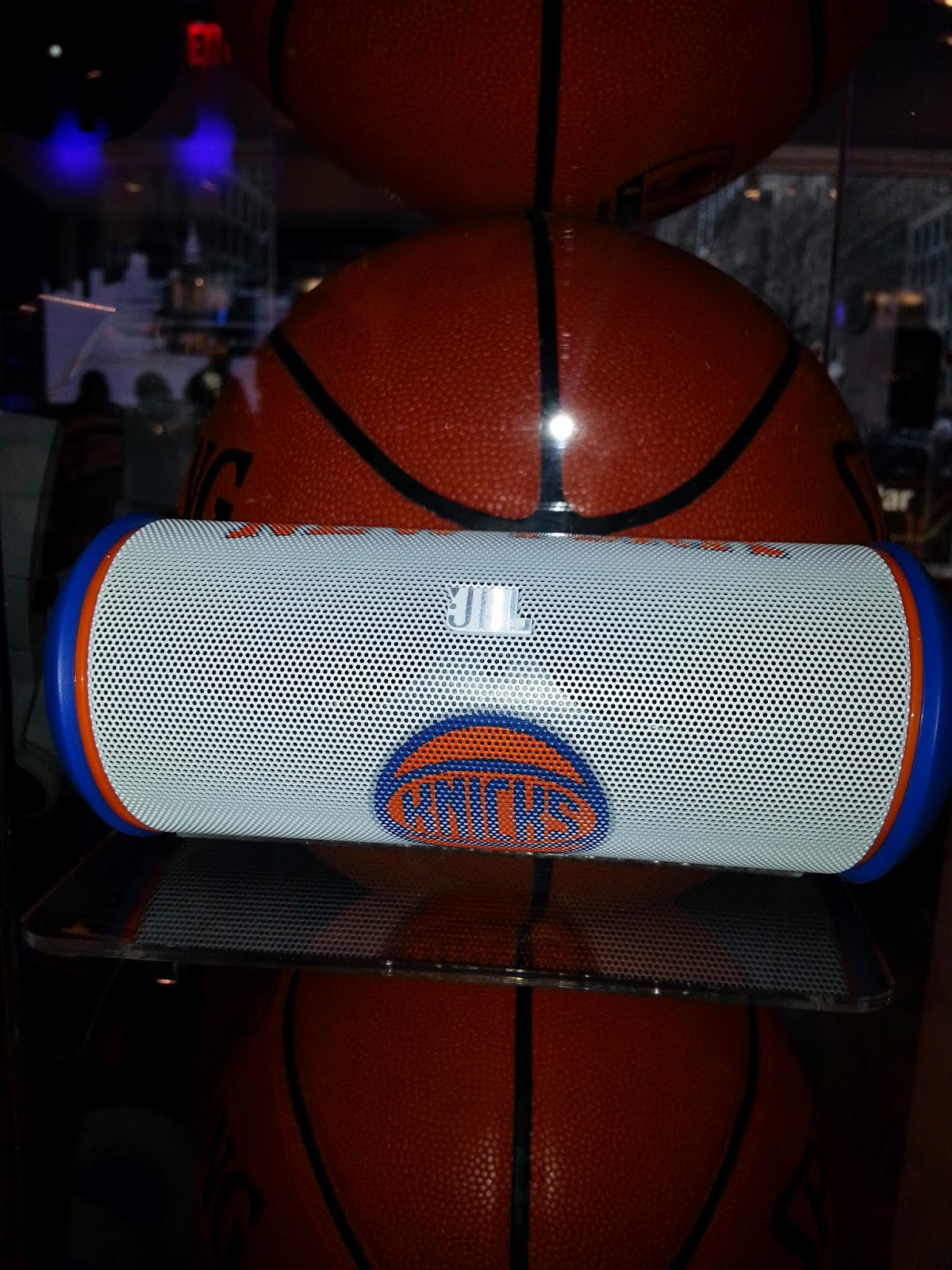 This speaker would be a sweet addition to the Sports Room here in the House Of Swag. 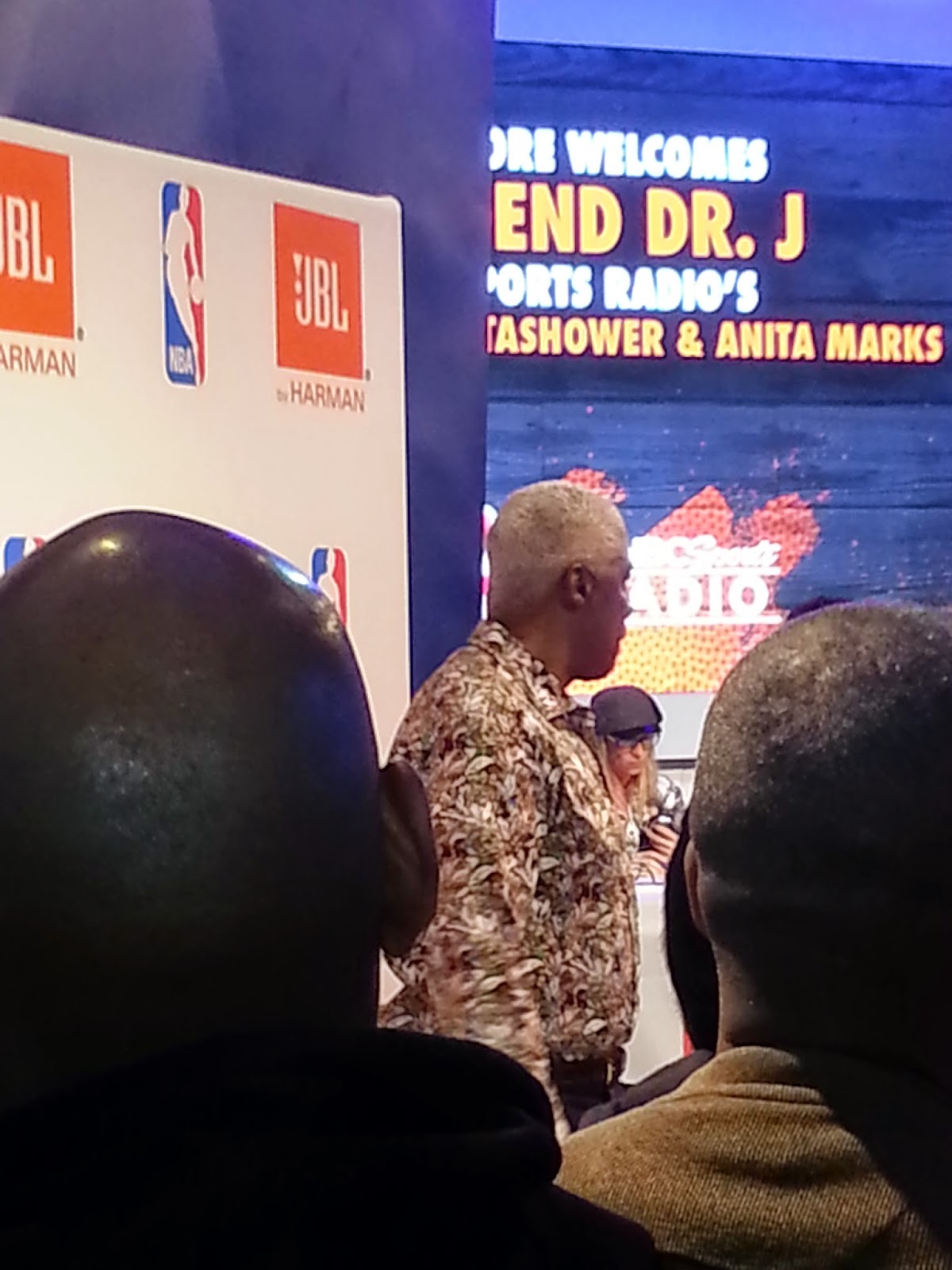 The signing was supposed to have been from 1-3 PM. Of course, 1 Pm rolls around and no Dr. J. The employees passed time by giving out speakers, headphones and Knicks tickets via a raffle. Finally, around 1:15, the man of the hour arrives and goes directly to a radio show that was emanating from the store. I understand that these players have to promote the All Star game and the festivities that take place before the game, but at least get there before your scheduled start time to take the interview. Most celebrities will want to leave at the appointed time, no matter what even if they were late starting the signing. OK, rant over.

After his radio spot, Erving came over to the table to start signing. Another problem arose when we were informed that he was only signing the 8x10's supplied by the store. I really wish the advertisements would state that when promoting the event. I wouldn't have had to run around to find a place that would print an 11x14 on such short notice and waste the money to have it printed up.

When I finally got to the front, I told Dr. J how I remembered watching him play for the New York Nets and being impressed with his dunking ability. I also told him it was an honor to meet him. He seemed like he appreciated the comments and shook my hand while posing with me for the picture. 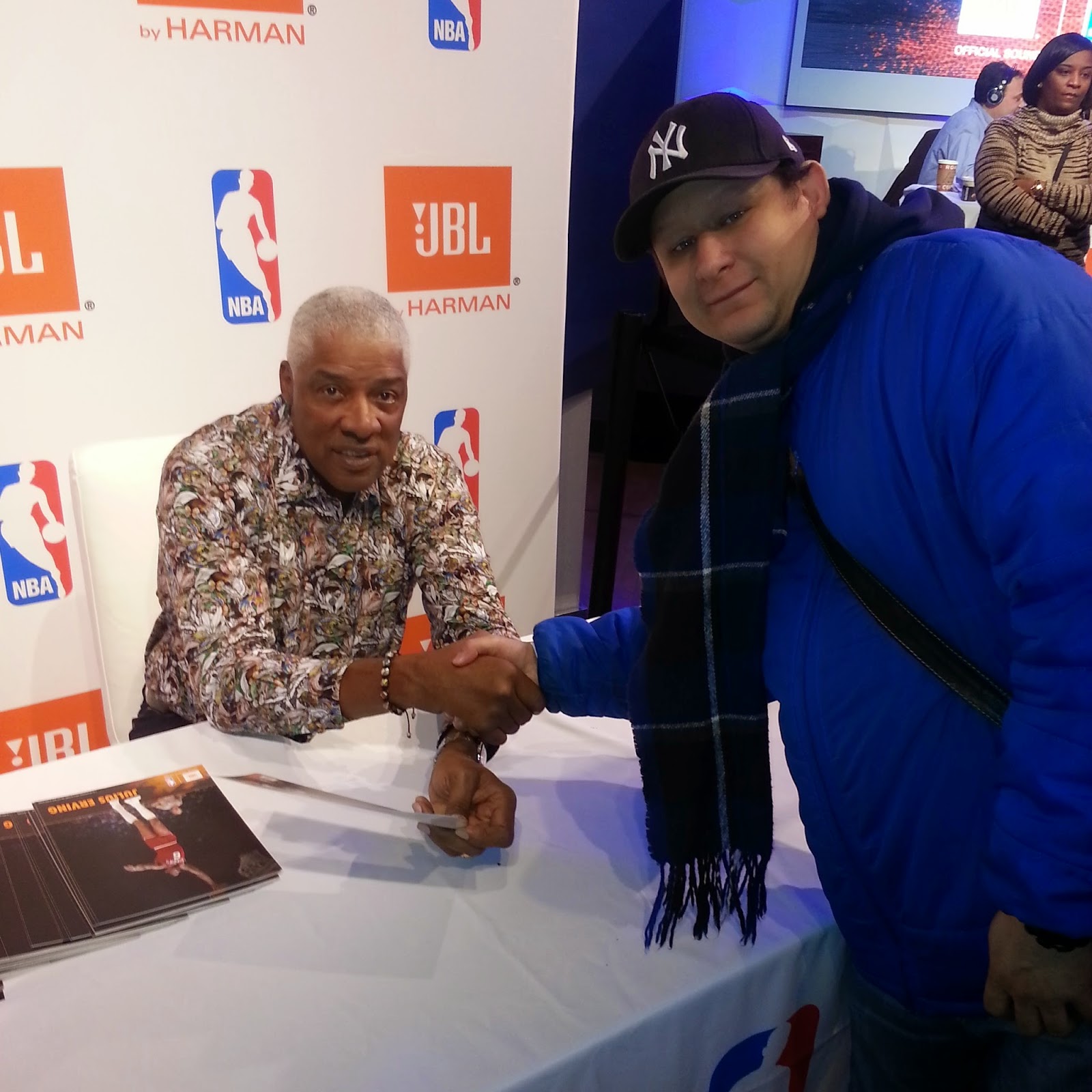 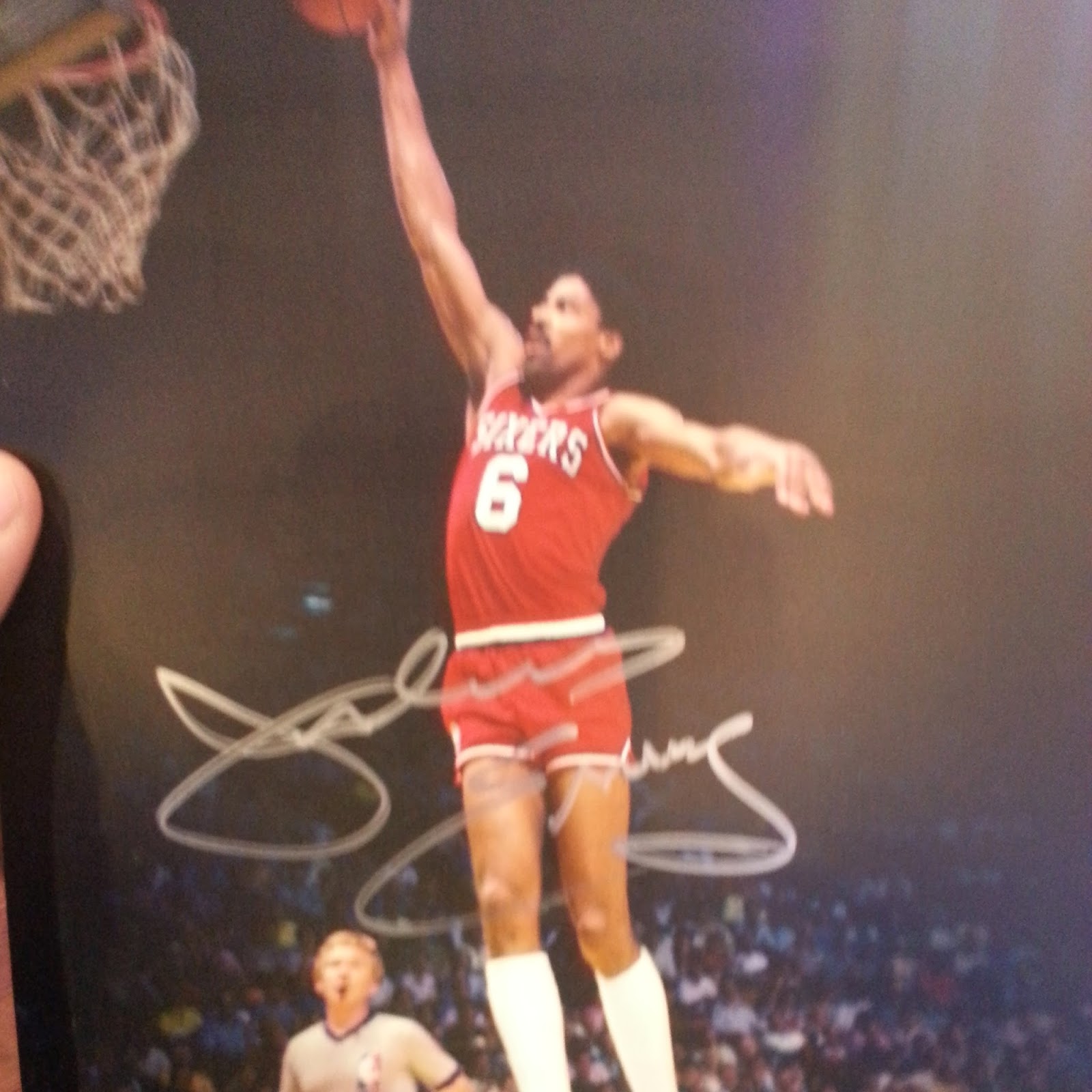 The photo is actually a lot nicer than I expected. It's still printed on that card stock that so many photos given out at these free events are printed on, but the store and corporate sponsor logo is a lot smaller than on other photo's I've received in the past. Still, you can't complain about getting a free autograph from an NBA legend like Julius Erving.

It was great to meet the good Doctor. I always try to make it to a signing to meet legendary players. You never know how long you have to meet them before they stop making appearances due to age or they just don't want to be bothered with signing autographs.  I honestly don't get out to as many appearances as I'd like to, but being able to ad Dr. J's autograph to my collection makes me want to go out and find more appearances.