More Vintage In My Jets Collection. 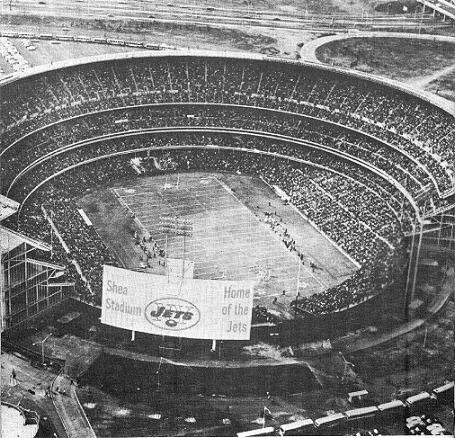 I may have been only one of a few Yankee fans who was saddened when Shea Stadium was leveled back in 2009. I mean, as a Yankee fan, I should have been dancing a jig when that old place crumbled to the ground. In it's final years, Shea wasn't exactly a great place to watch a baseball game. It was outdated, the bathrooms were terrible and the sound system was horrible.

I spent a lot of time at Shea Stadium, especially as a kid. My buddy's father took me to a lot of Met games, even getting to meet some of the players in between the dugout and locker room. I got to see the '86 Mets play there. I got to see players like Hubie Brooks, George Forster, Dave Kingman, Dwight Gooden, Darryl Strawberry, Gary Carter, Keith Hernandez, Bobby Bonillia, Mike Piazza, Jose Reyes and David Wright grace the Shea Stadium grass. But that is not why I wasn't too happy to see Shea go down in a pile of dust.

My first Jets game was at Shea. I don't remember the score. I do know the Jets lost to Buffalo, I think. I remember Richard Todd throwing a couple of picks that game and the defense getting burned on a couple of touchdowns. The crowd wasn't like any baseball crowd I've seen. They were a bit more loud and raucous. I was sitting in the upper deck, just above the Jets sideline. I may have been high up, but I felt like I was a part of the team and it cemented my love for the green and white.

The Jets played in Shea for only a couple seasons after, but Shea will always have a place in my heart as the home of the Jets. Whenever I find a piece of Jets memorabilia with Shea Stadium on it or having come from Shea, I always try to add it to my Jets collection. I have a Jets pennant with Shea pictured on it as well as a program from Shea. 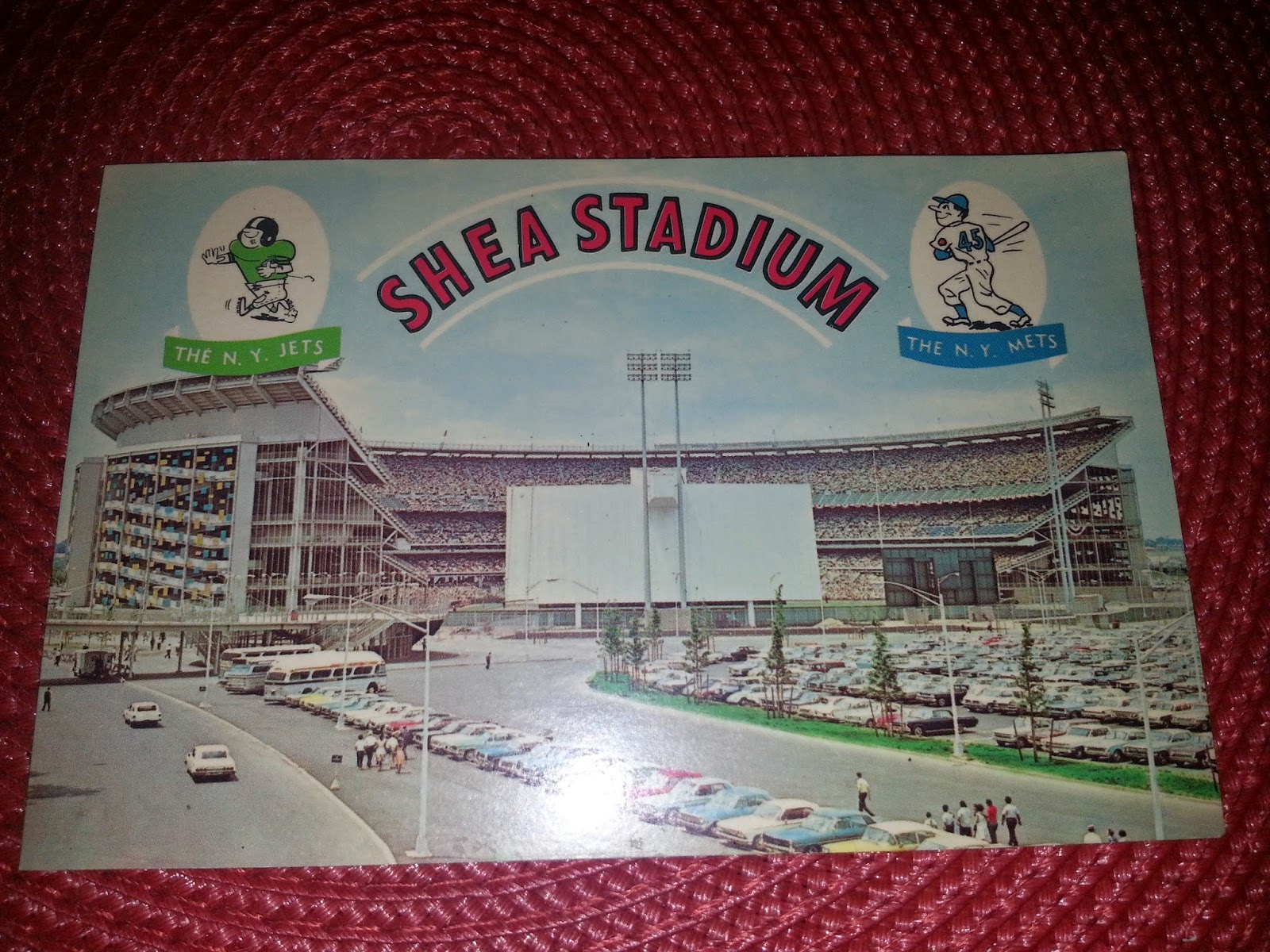 I have actually had this post card in my Jets collection for about 2 years now. I had been trying to win one off eBay, missing out a few times. I finally won one in really good shape for under 10.00, if I remember correctly. I have never been a post card collector before, although I had considered picking up some vintage Yankee Stadium post cards, but never pulled the trigger on any.

The post card above is dated 1964 and was released by Dexter Press, Inc. I'm guessing the picture was taken sometime during that '64 season as the stadium opened on April 17th, 1964. The post card gives you an idea what Shea looked like in it's first season in it's existence. The one thing I always liked was the hovering "speckle" Shea had in those days. I don't think they were still there when I started visiting the ballpark. I liked them more than the neon ballplayers they put up in Shea's later years. 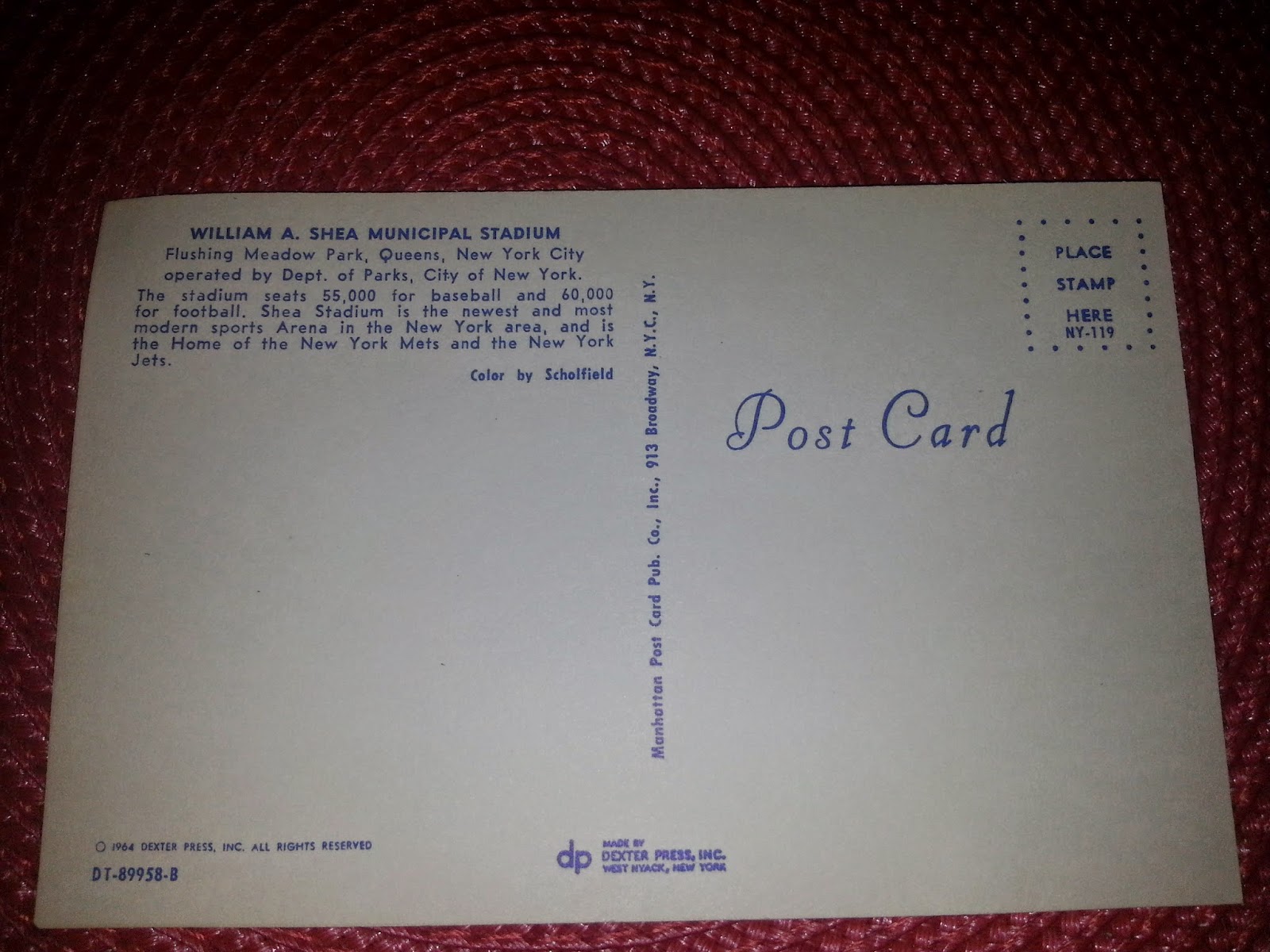 The back of the post card gives you a little bit of information about Shea; where it was located, how many it seats for both baseball and football, who played there and who added color to the photo (It was a company named Scholfield).

The reason why I picked up this post card was because there is a Jets presence on it. If you look on the upper left hand corner, there is a football player in a green jersey, running and carrying the pigskin with the words The N.Y. Jets underneath. Without that football player, I would not have picked up this piece. I am glad to own it as I am fascinated with Jets history and the post card is a unique piece to add to any Jets collection.

I will always look for vintage pieces to add to my Jets collection. If it has something to do with Shea then I will be quick to jump on it. There's not a lot of pieces left that connect the Jets to Shea Stadium, aside from programs and yearbooks. It's been 31 years since Leon Hess took the Jets over to Giants Stadium, so finding anything that has t do with the Jets and Shea is hard to find. But when I can add something like the post card, then I'll always do what I can to get it because Shea Stadium will always have a place in my heart. Just don't tell any other Yankee fan I said that.
Posted by Unknown at 2:14 PM