I Love To Get My Balls Signed...Baseballs, That Is. 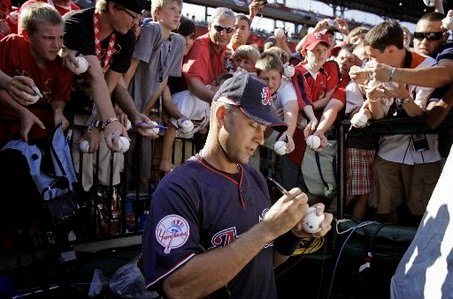 One of my hobby goals for 2014 is to get more autographed baseballs in my Yankees collection. In fact, I have made an ambitious goal for myself and that is to get as close to 100 signed baseballs from Yankee players, former and present, for the collection. I say it's pretty ambitious because I'm not what you would call an autograph hound. I don't go chasing players or wait at their hotels or hang out the ballparks before players arrive. Of course that's because I don't know where the player hotels are and it's difficult to graph at Yankee Stadium.

So, how do I add signed baseballs to my collection? Player appearances is one way. That's how I was able to get players like Hideki Matsui, Darryl Strawberry, Bucky Dent and David Cone to sign baseballs for me. Another way is card shows. The card show I go to usually will have 1 free player and if that person is what I deem "ball worthy", I will get them to sign or I will pay for the player if he's not too expensive. Some of the players I have gotten this way is Ruben Sierra, Bobby Richardson and Gaylord Perry. Then there is the TTM route. To be honest, I have lost more baseballs than gotten back, but a couple of the players I have gotten back were Mike Mussina and Jimmy Key.

So, here is the signed baseball collection right now: I have them on a shelf right over my bobblehead collection. I kind of think I'm running out of room. I probably have just that row to finish and that would be it. Another row might be pushing it.

So, which players do I want to add to the collection? Well, I have more than a few players in mind.

The Hall Of Fame Players

There are other players I want as well like Aaron Boone, Dave Righetti and Bobby Murcer. Players who may not have had hall of fame careers or won a championship here, but still made a difference in Pinstripes.

So, as you can see, I have some players to chase around if I want to get to my goal of 100 signed baseballs by the end of 2014. Right now, I'm at 42 baseballs, so if I'm going to get to 100, I better get my butt in gear. I consider myself rather fortunate that I am lucky enough to have the autographs that I do own. Hopefully by the end of the year, I will be wondering where am I going to display all the autographs. Then I will know that I reached my goal and can set my next goal. 200, here I come.
Posted by Unknown at 7:23 PM