The First Rule Of Fight Club Is You Have To Go To A Car Show To Meet A Knick! 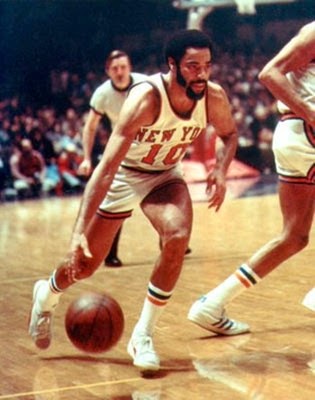 The New York Auto show is in full swing. The event is held at the Jacobs Javitz Convention Center every year and thousands of car enthusiasts visit the show each year to check out the new cars that will be released in the upcoming season and do other car related things. Being that I am not a car guy I have never been to the show. I don't own a car nor have I ever in my life. I have never worked on a car or even cleaned one. I do have a drivers license and can pump my own gas, so I at least have that going for me.

But I did attend the show today. Why, you may ask? None of your business!

OK, I'm just playing with you guys. Walt Frazier of the New York Knicks was appearing at the show today. He of 2 NBA Championship teams. He of the 50 greatest NBA Players of all time. He of awesome fashion and even better grammar was signing autographs from 1-3 at the State Farm booth and I was going to be there. Frazier has been on my want list for a while, so I made sure I was going to be there. 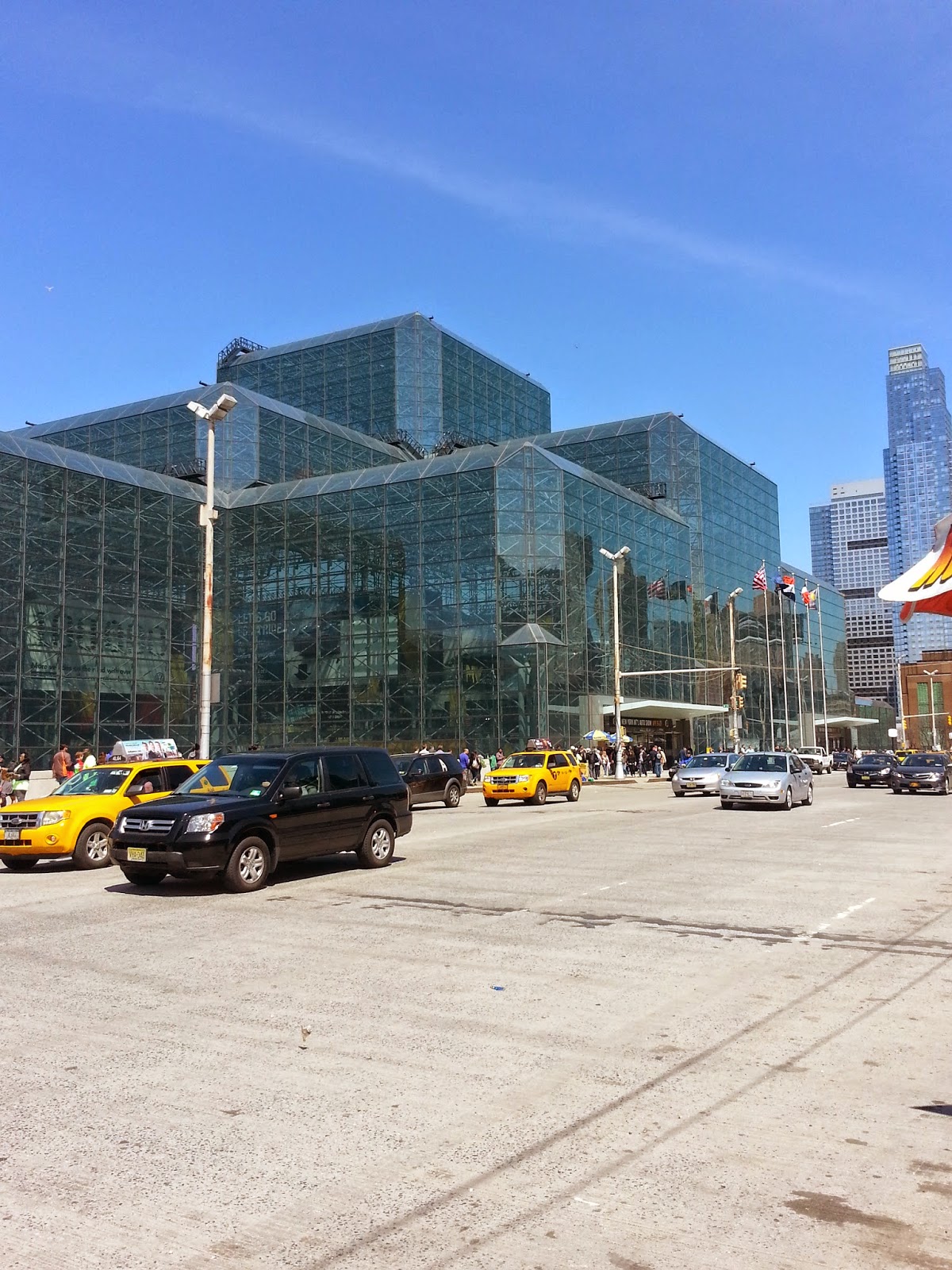 Thanks to New York Transit, I arrived at the convention center a little later than I expected to. For those who do not live in New York City, riding the subways on a weekend is one of the absolute worst things. There is always construction somewhere and it causes delays. So, it took me over an hour to get to my destination today. Thanks MTA.

After having my bag checked at the door and paying my $15.00 ticket for a show I had absolutely no interest in checking out, I made my way to the State Farms booth, which was on the same floor as the entrance, lucky for me. When I got on the line a little after noon, I was pretty close to the front of the line. 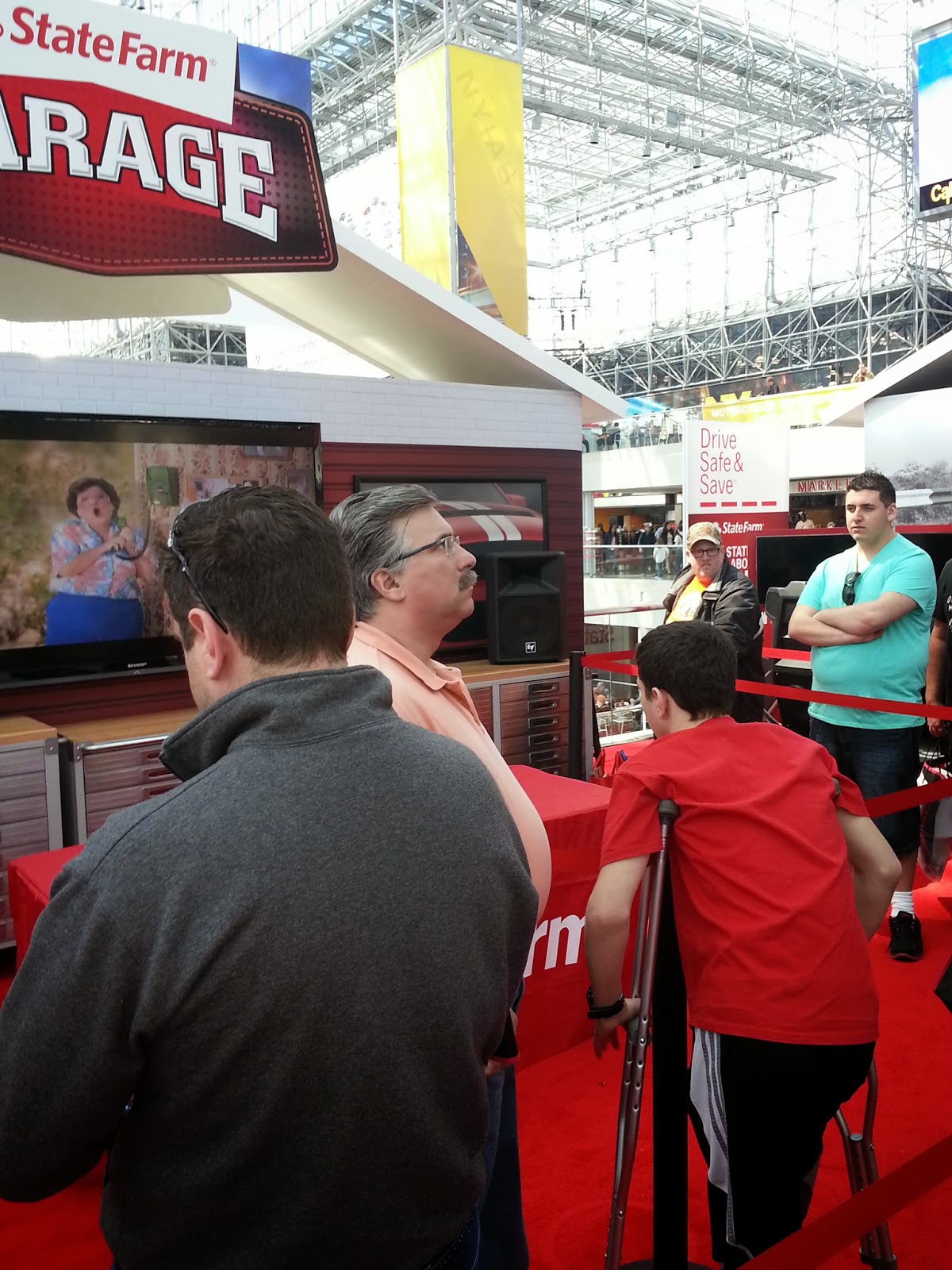 The front of the line was just a wrap around the ropes for me. Comfortable with this knowledge, I put my bag down and pulled out a book to read. I am currently re-reading the Last Night Of The Yankees Dynasty. It was a good read the first time I read the book and it is even better the second time around. I highly recommend it if you have not read it yet.

As it was getting nearer to showtime, I noticed the workers pulling out a couple of boxes of photos for Walt to sign. They were nice, except for the State Farm logo on the bottom of them. I had bought a mini basketball and my New York Knicks 50th Anniversary book that I am getting signatures inside. I was hoping to get "Clyde" to sign either one, but when I saw the pictures my heart sank. On one hand, I was thankful I was finally meeting arguably the 2nd greatest Knick after Ewing, but I really wanted Frazier to sign my items. Thankfully, it was announced that Walt would indeed sign what you had, but it was one per person, which I was fine with.

Around 12:55, I looked behind me and was shocked to see the line behind me. 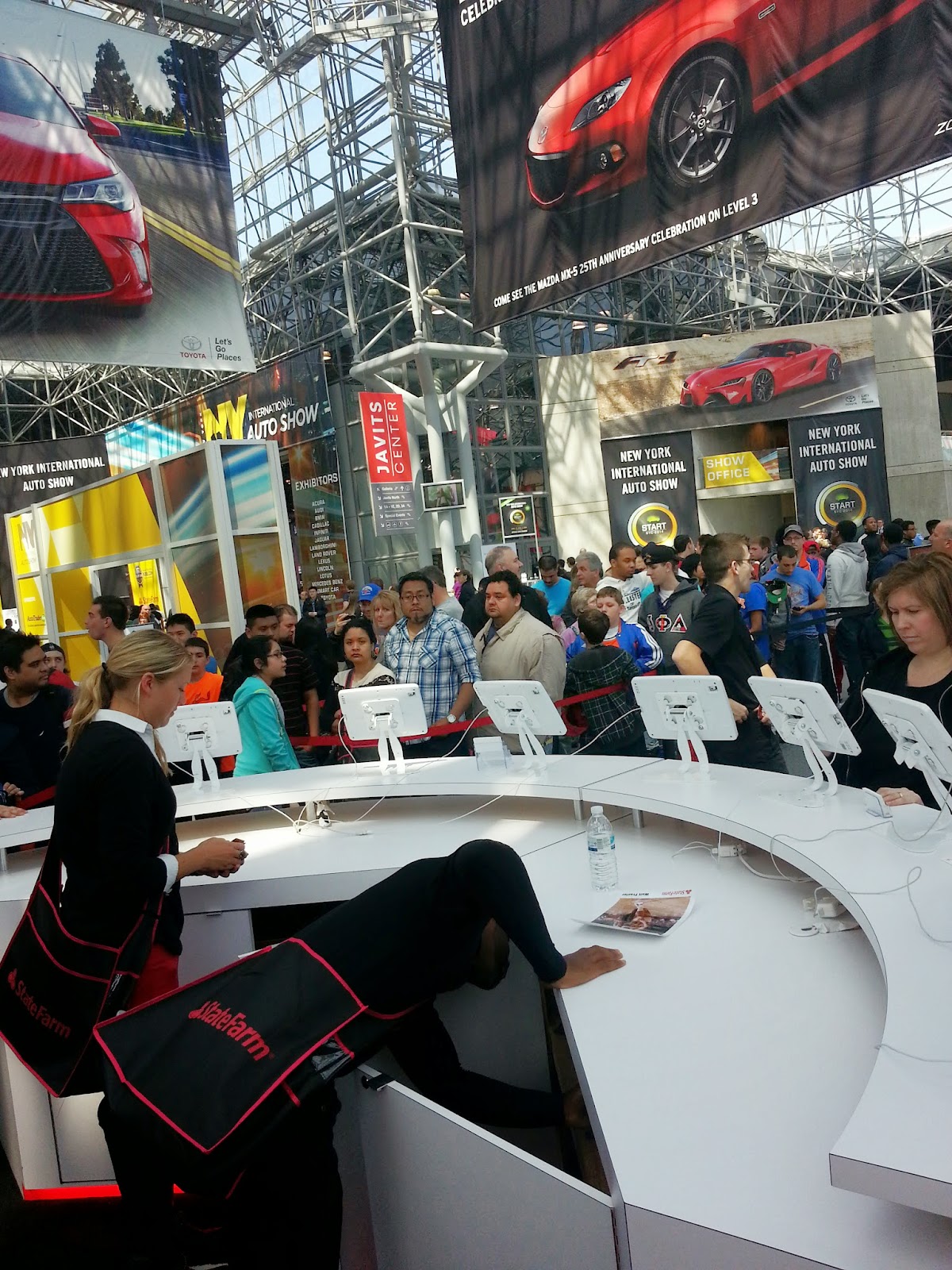 Quite the turn out. I shouldn't be surprised. The man is a Knicks legend and is still very popular with Knicks fans thanks to his contributions to Knicks broadcasts on MSG as a broadcaster. He even opened a restaurant in New York City called Clyde Frazier's Wine And Dine. I've been there before and it's a very nice spot. 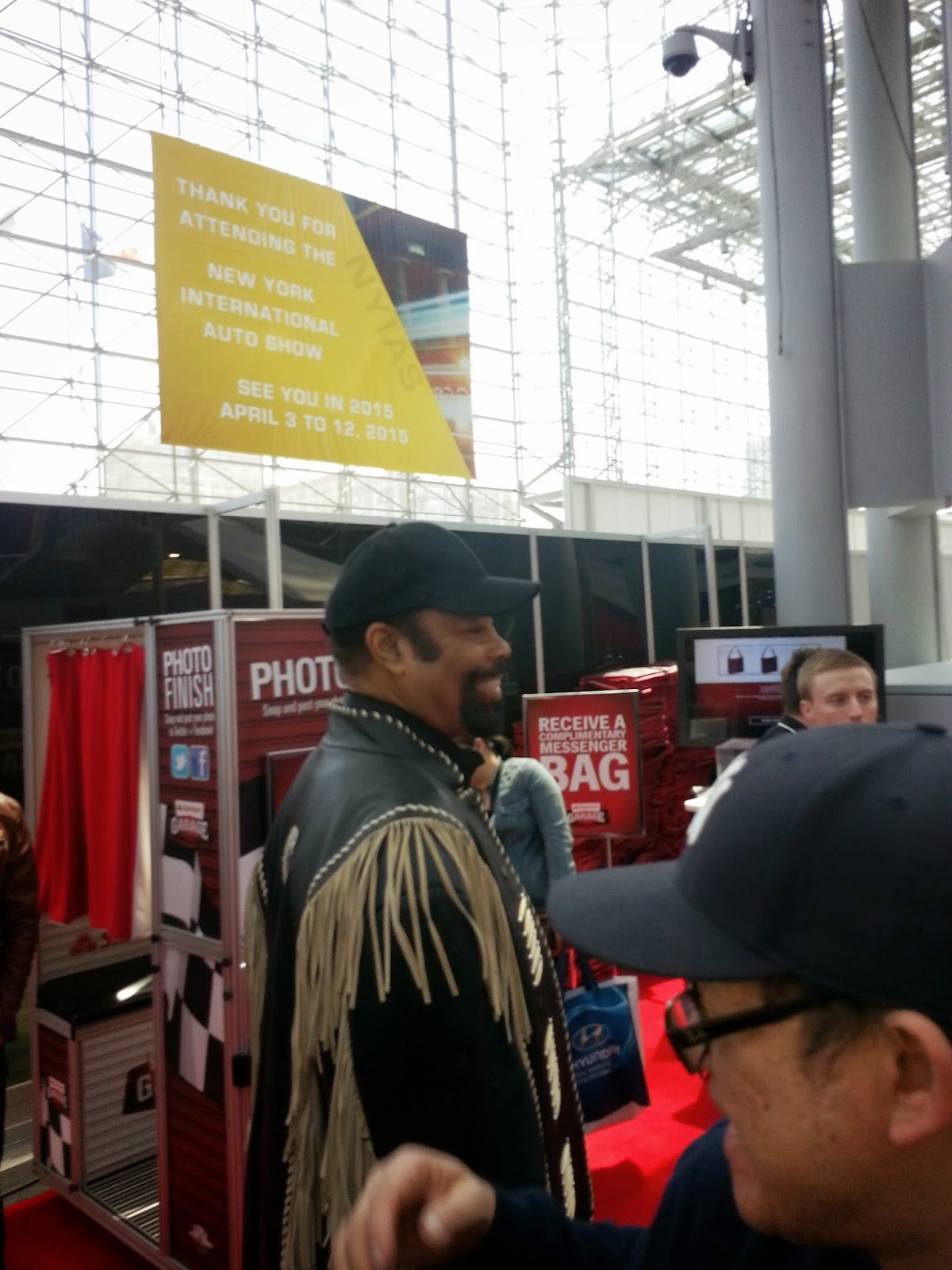 Right at 1 PM on the button, Frazier shows up. Check out his jacket. What did I say about his sense of fashion? Pretty sweet.

I was actully expecting him to be a bit late. As of late, whenever I show up for a signing the athletes are usually late. Although Hideki Matsui was on time, I figured it was a fluke and Walt would be a bit late. Nope. He was right on time and got right to work upon sitting down.

The line moved rather smoothly. Walt was interacting with the fans, smiling, posing for pictures and being the man I had heard he was. A very humble and gracious person. When it came to my turn, I decided I was going to take a picture with Walt, even though I rarely take pictures with the athletes. I was not passing that opportunity up. 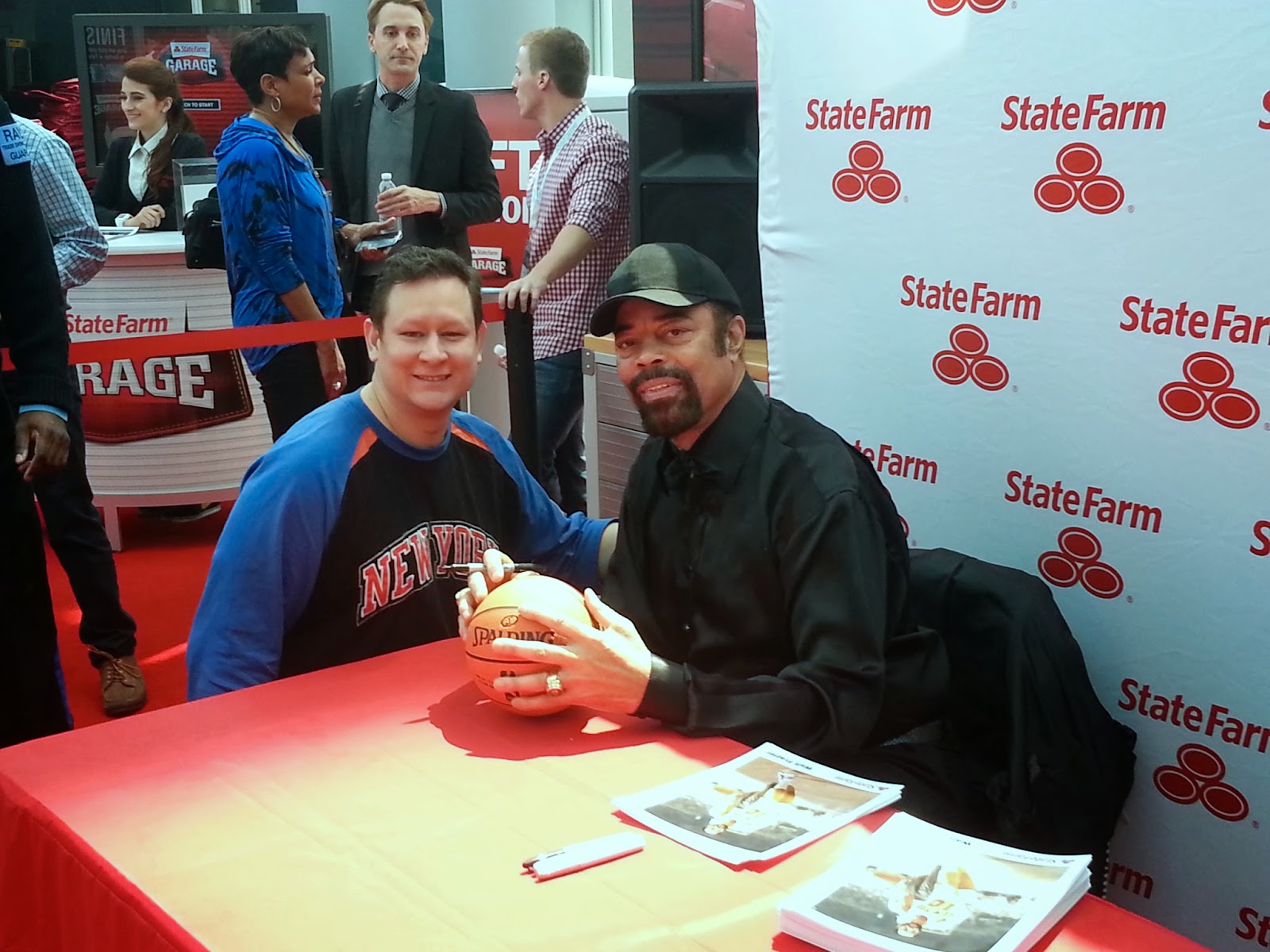 Before I got up there, I decided to have the mini basketball I bought signed. While he was signing, I told him what it honor it was to meet him and I loved his restaurant, which he told me he was going to after the signing. I probably should have gone to get him to sign my book. Once I left, I took a look at the ball and wasn't thrilled with it. 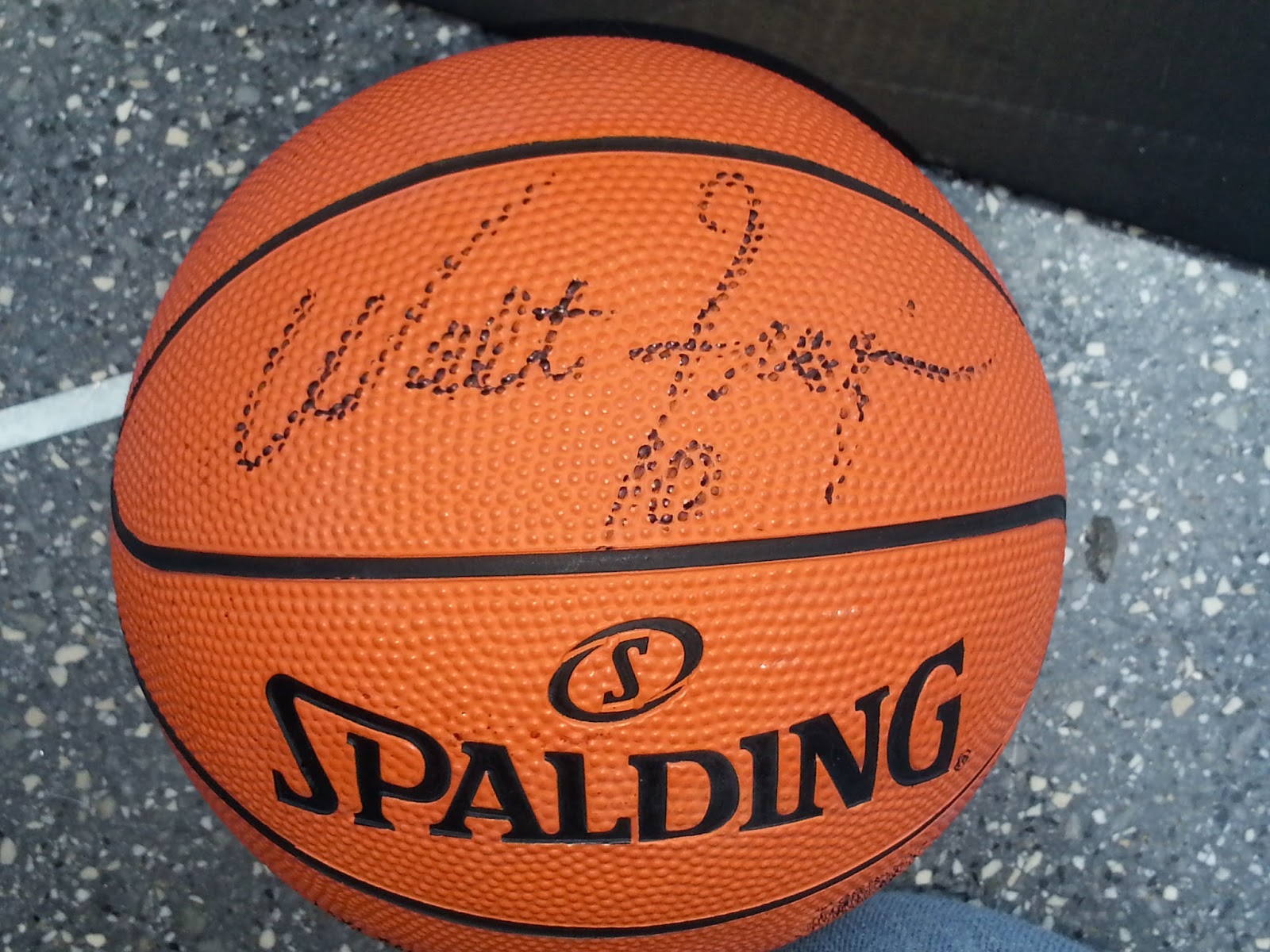 The signature is not as bold as I would have liked it to be because he used a blasted Sharpie marker. Not Walt's fault. That's all he had up at the table. The day prior, I was looking for Deco paint pens and most places I tried didn't have them. I went to the one place I didn't go to yesterday after I left the show and found a few. I guess I should have gone to the store yesterday after all. Maybe if I had, I would have had a better signature on my ball. Lesson learned.

After seeing how this ball turned out, I seriously thought about giving up getting signatures on balls. My other efforts, the Bernard King, Larry Johnson, Charles Oakley, Amar'e Stoudmire all came out disastrous. I'm going to try one more time, this time with a Deco. My Carmelo Anthony ball looks great and that's because he used a Deco. Same as Wayne Chrebet on a football. Those give me some hope.If not, it will be photos from here on.

Despite the signature, the day was a pretty cool day. I got to meet one of my all time favorite Knicks and even if the signature isn't the boldest, it will still look good on display when I get one up. A day like today, I'll take it every time.
Posted by Unknown at 9:07 PM