Another Former Yankee Is Added To The Sports Room 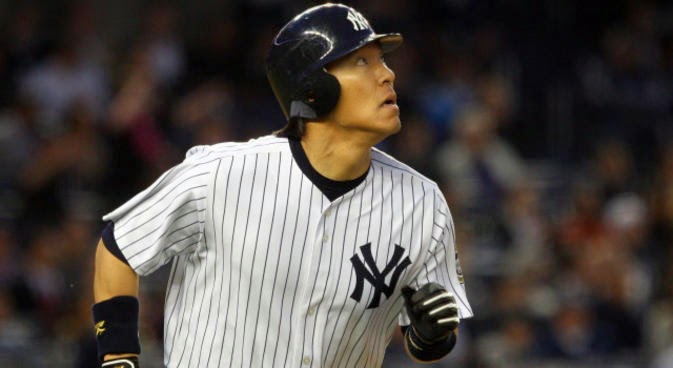 To be honest, I wasn't planning on writing this blog post tonight. I was going to save it for tomorrow because I am beat. I mean beat like a drum. I am so tired that nothing will wake me up tonight. Why am I so tired you ask? Well, read on and you shall find out.

Today, I attended the Staten Island Yankees ticket sale day. As much as I enjoy going to Staten Island Yankees games, and I try to attend at least 3 games a year, I wasn't planning on picking up tickets the day the tickets went on sale. I used to have a mini plan, then I just decided to g to the games I wanted to attend, which was cheaper in the long run for me. But really, why was I at today's ticket event if I wasn't planning on purchasing tickets until later?

If you said to meet Hideki Matsui, you win a pack of Pocki.

But, admit it, you guessed it when you saw the picture, right?

Yes, When I heard for the price of a 9.00 ticket, I could meet the MVP of the 2009 World Series, I knew I was going to be there. My friend said we had to be there early because it was probably going to be a mad house. It made sense to me. Matsui has not made any apperances to my knowledge and his autograph is one of the harder ones to get, so naturally, I expected a lot of people showing up meet him. So, we agreed to be at Richmond County Ballpark by 7 AM. 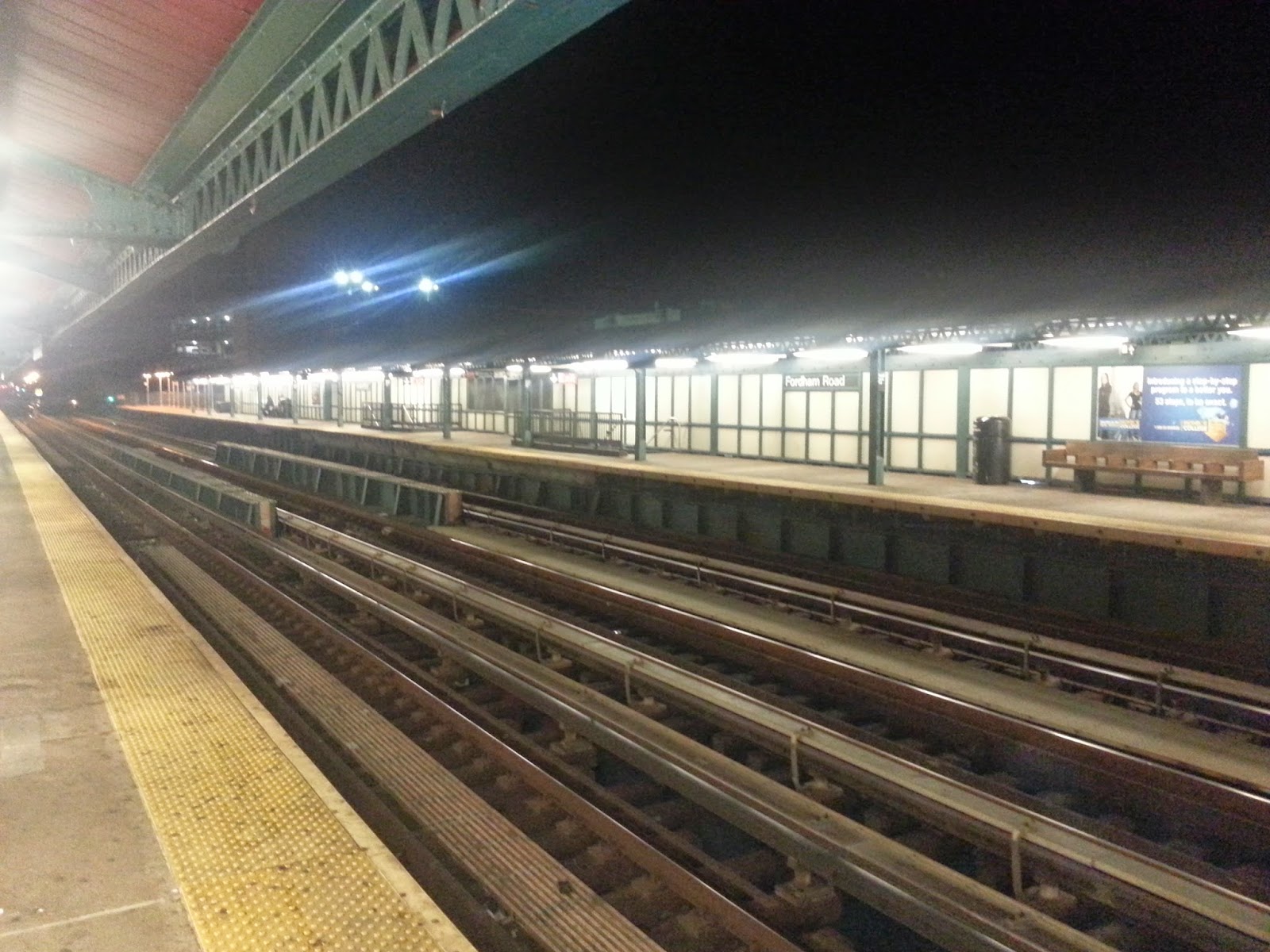 This is what I saw at 5 AM Saturday morning. At this point, I am thinking that I am out of my mind. I only had 3 and a half hours of sleep the night before. I was without coffee. I was the Walking Dead at this point.

The 4 train was going local and I was afraid I was going to be late because of it, but luckily, I made it to the Staten Island Ferry Terminal with about 15 minutes to spare. I met up with my friend and we boarded the ferry to make the boat ride to Staten Island.

When we got to the Ballpark, there was only about 10 people in line. most were friends of my friend, so for the next couple of hours, I hung out with them and we talked autographing. Which players they scored, who was a jerk about signing, so on and so forth. Little by little, people started showing up, but not the crowd I was expecting. 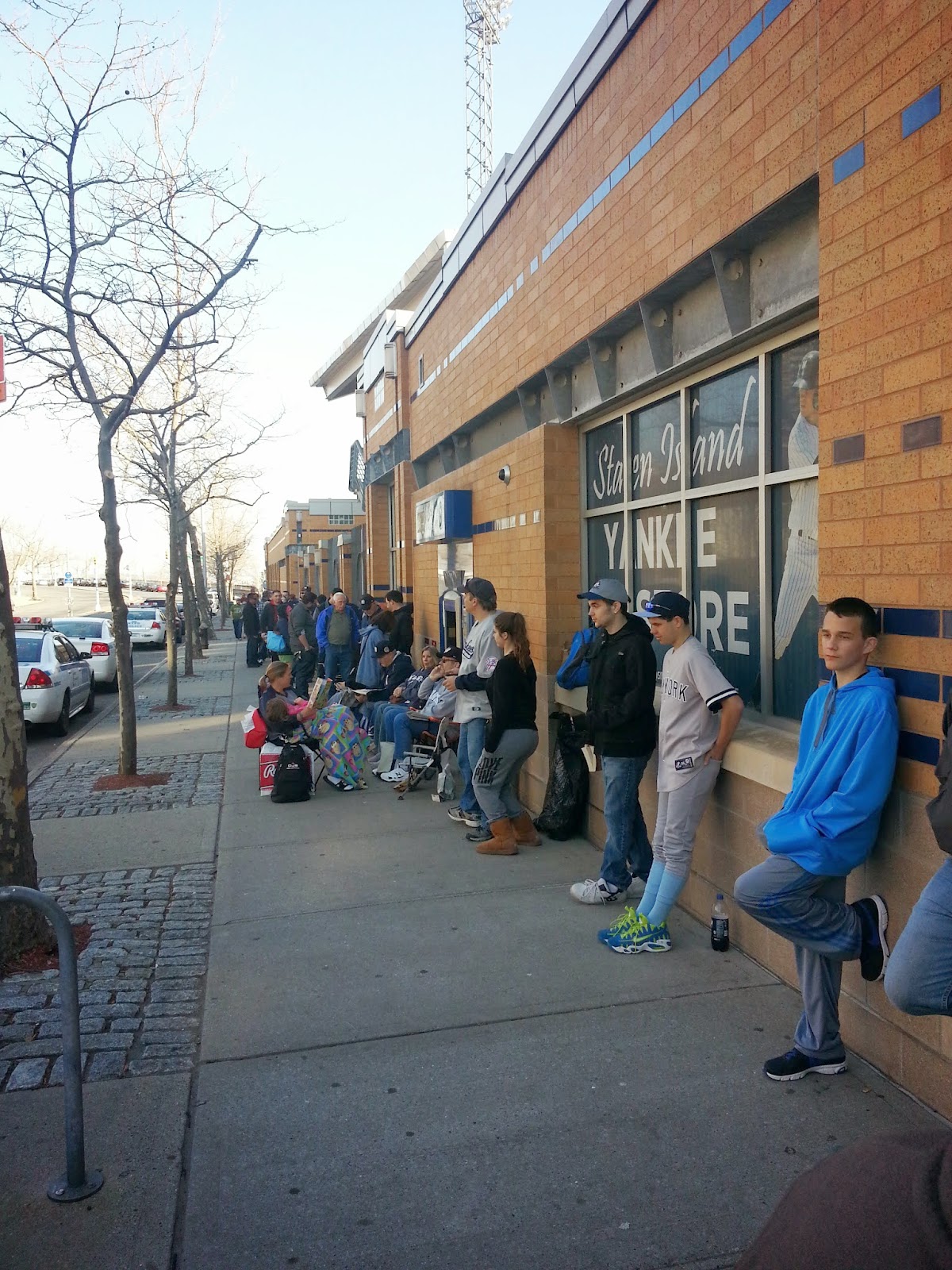 here's the line at about 8 AM. The line had about 50 people at this point. Final tally, I heard, was 125 people. Not nearly as many as I was led to believe. I probably could have slept an extra hour. 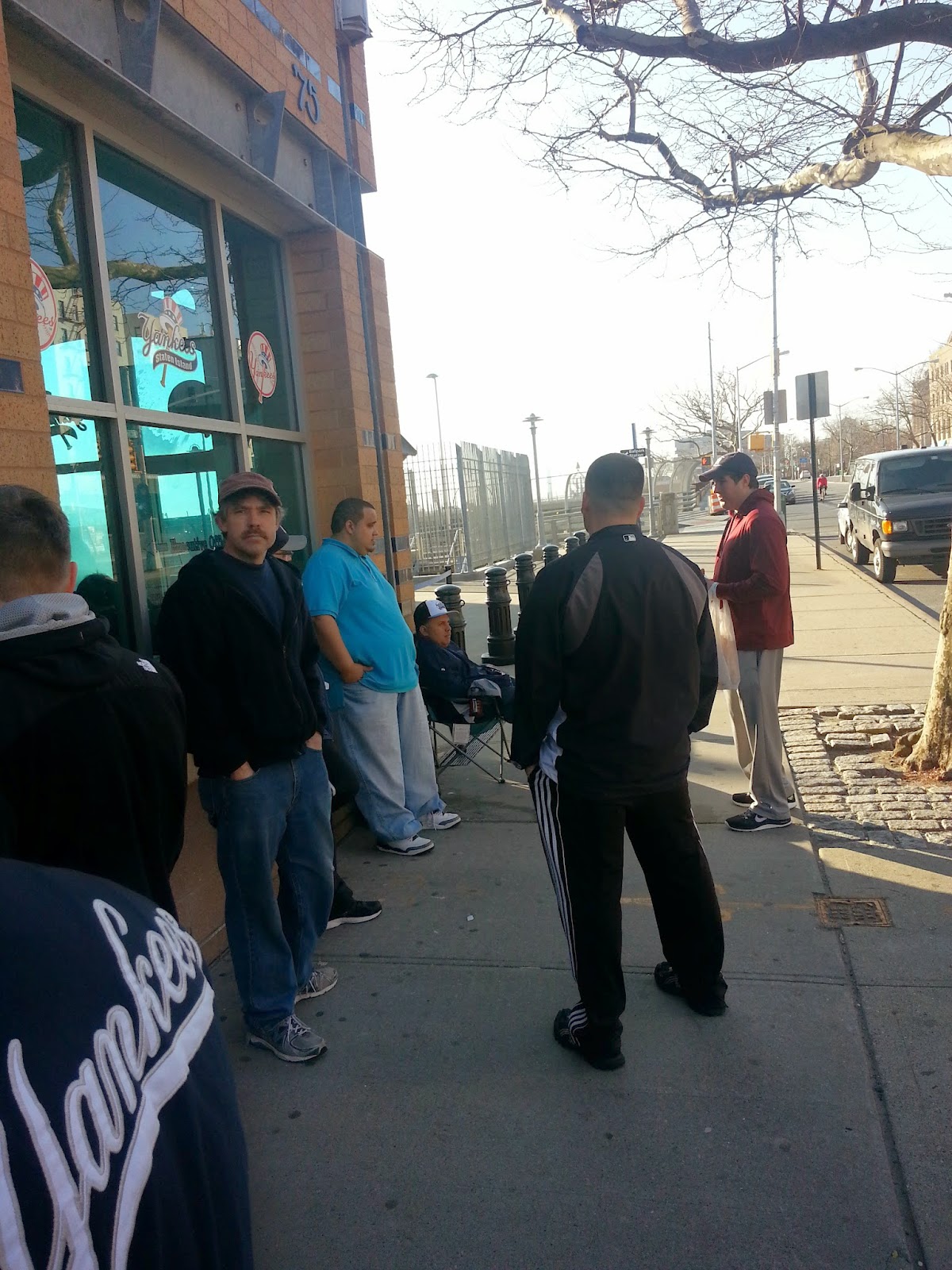 And there's the front of the line. In actuality, I'm fine with getting there uber early. When the ticket windows opened at 9 AM, I got my ticket for June 28th, Yankees vs The Cyclones, and walked into the ballpark and got on the second line that led into the team store where Matsui would be signing. 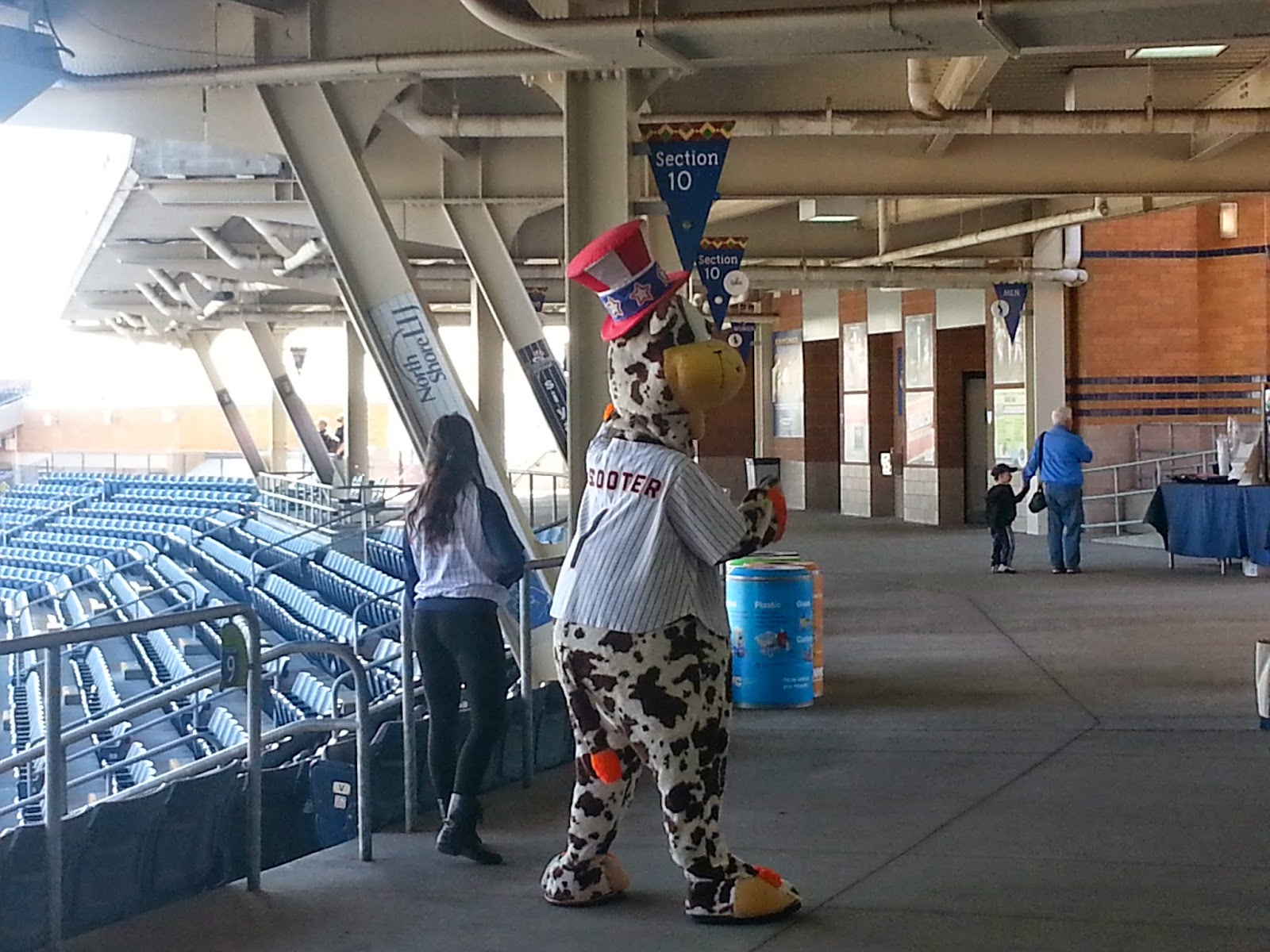 Once we were inside, we were entertained by the team mascot, Scooter, The Holy Cow who was getting his freak on, delighting the children with his antics, but also scaring the old ladies who came out for the signing. 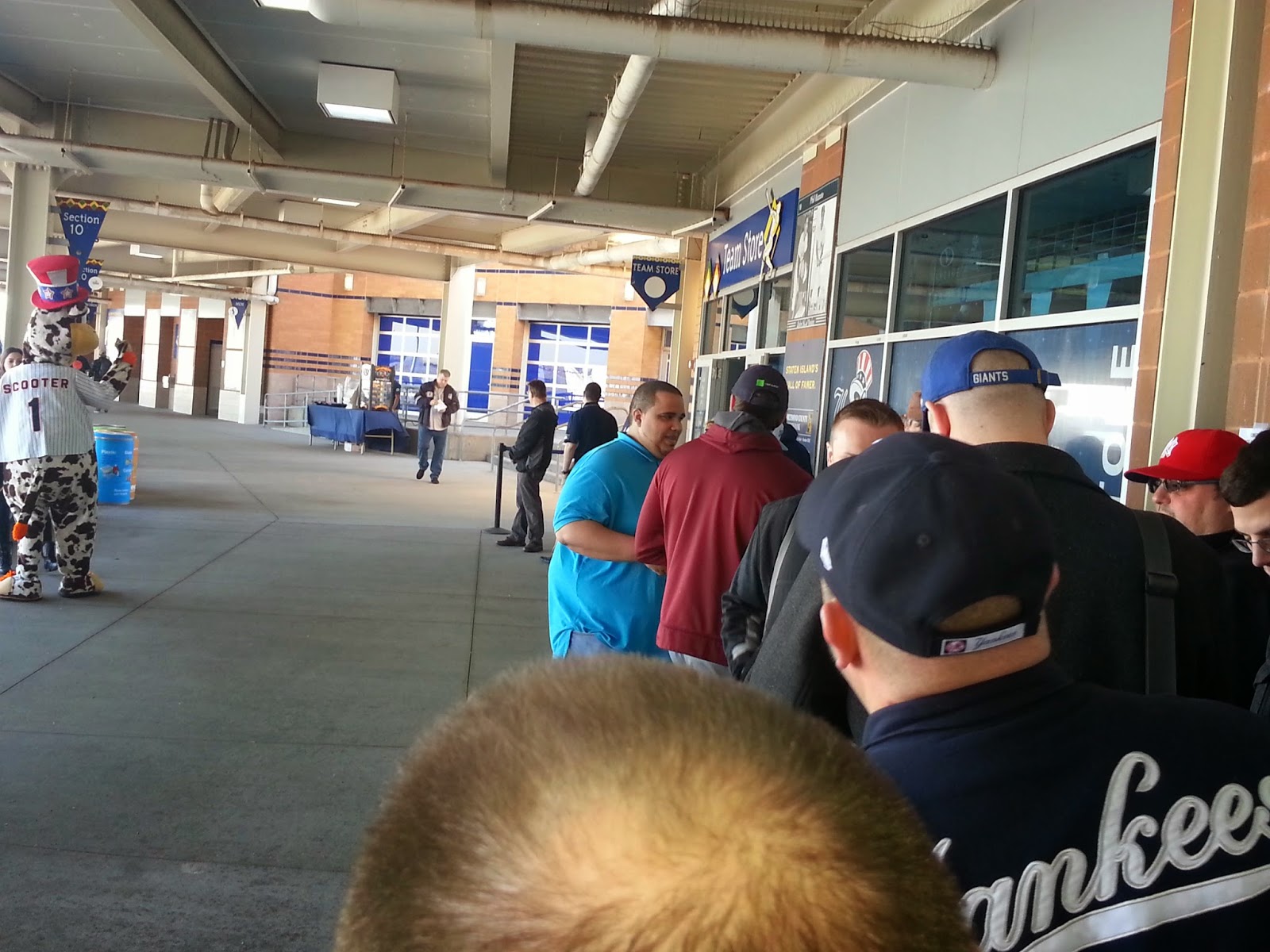 Once inside, the line moved pretty quick and before you know it, we were meeting Hideki Matsui. He was very kind, but quiet. He really didn't say too much. I do understand that his English isn't great, but he seemed like he understood what we were saying as he would sign inscriptions as instructed and would say thank you at the end of conversation.

I asked him for a 2009 World Series MVP inscription. I made the mistake of holding my pen and he thought I wanted him to sign with that pen and signed my ball in black ink, which I didn't want. But, it was my mistake for not paying attention, so I can live with the black ink autograph. I thanked him and went on my way. 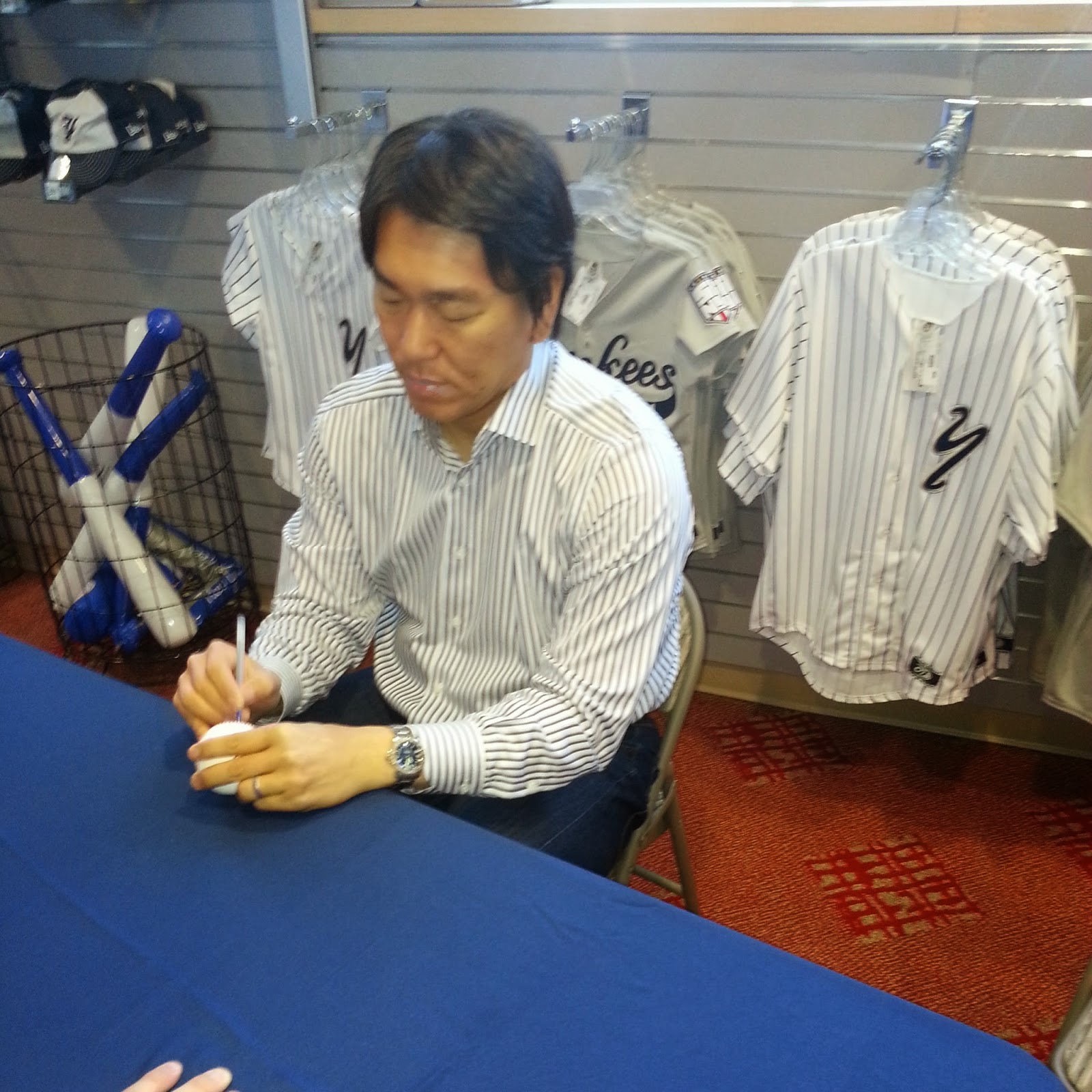 Once we left the team store, My friend and I looked at the line and decided we could actually buy another ticket and go back on line for another autograph before he stopped signing at 12:00. When we got back in line, it was only 10:30 AM.

So, this time, I bought a ticket for August 30th Against the Vermont Lake Monsters, bought a baseball at the team store and got back on line. The line seemed to be moving faster than before and before you could say "It's a Thrilla, By Godzilla", we were back in front of Matsui. This time, I made sure my pen was in my bag and I asked for a Godzilla inscription, which he obliged in blue ink. I shook his hand, thanked him for the years of service to the Yankees and was on my merry way.

So, as I finish this blog, at 12:41 on a Sunday morning, you can now understand why I am seeing vapor trails right about now. But, as tired as I am, I have these that will make me dream easier tonight. Number 42 for the Yankee Signed Baseball PC. 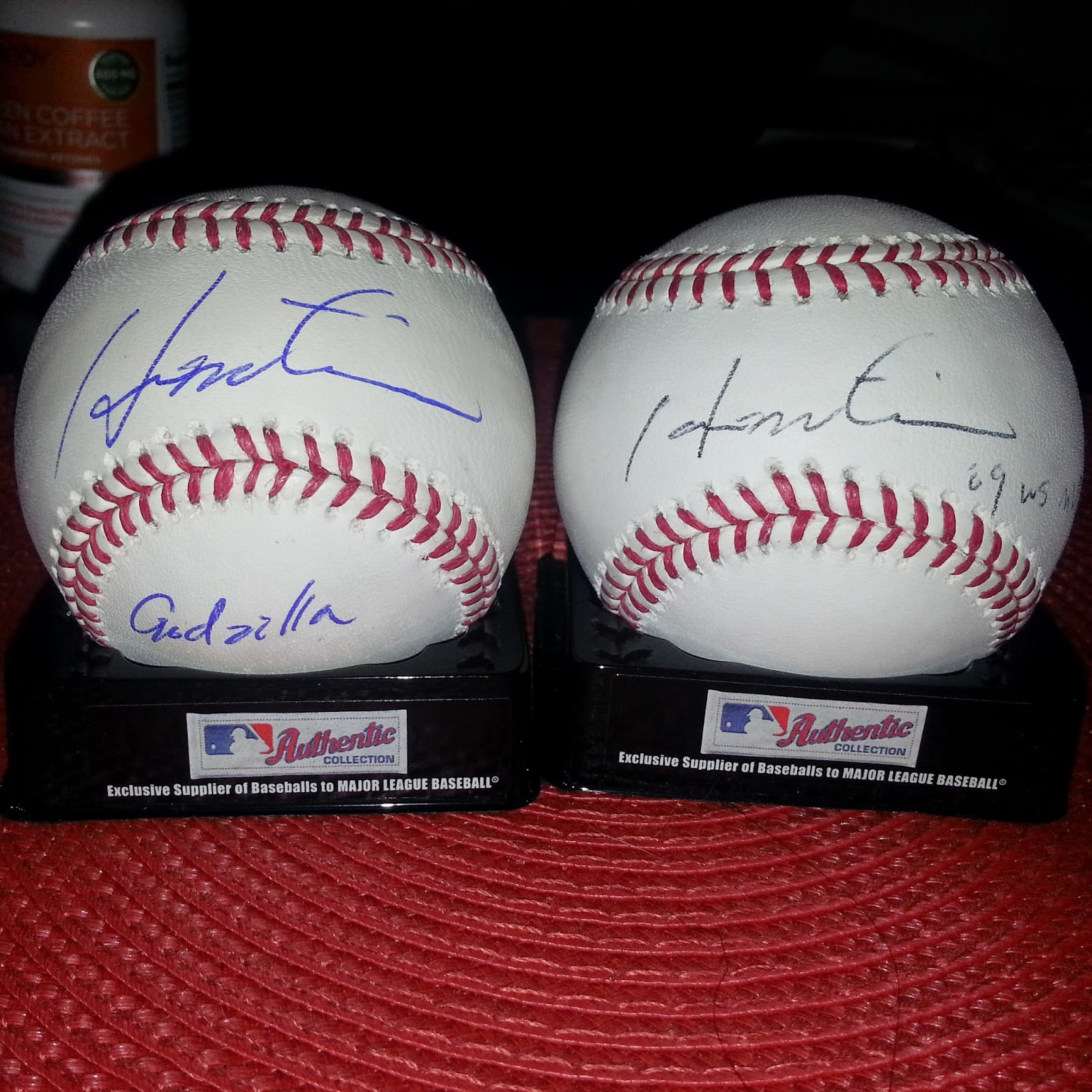