The Start Of My Roberto Clemente PC 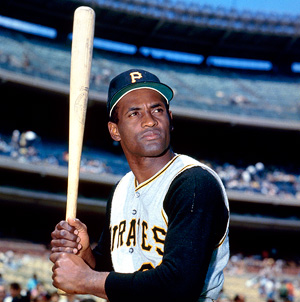 As a Puerto Rican American, I am fully aware of big baseball is in our culture. In Puerto Rico, Baseball is king. The first Puerto Rican born player in the Majors was Hiram Bithorn, who pitched his first game for the Chicago Cubs on April 15th, 1942. Since then, Puerto Ricans have played and flourished in the Majors. Players like Bernie Williams, Jorge Posada, Ivan Rodriguez, Roberto Alomar, Carlos Beltran, Orlando Cepeda, Edgar Martinez and the catching Molina Brothers. But to me, and most Puerto Rican baseball fans, the man is and will always be Roberto Clemente.

Clemente is widely considered to be the greatest Puerto Rican born baseball player who ever lived. Clemente is the first Hispanic born player to win a World Series as a starter, win a MVP award and a World Series MVP. He was a 15 time All Star, won 12 Gold Gloves and was a 4 time batting champion. He had a rocket for an arm and had 3,000 hits during his 18 year career, all with the Pittsburgh Pirates.

With all the accomplishments Clemente has on the baseball field, it's his charity work that I respect more. Clemente was very active in various charities and when he heard that supplies that were intended for the victims of a massive earthquake in Managua, which is the capital city of Nicaragua, never made it to them, he went on a charity mission to personally make sure the supplies would make it to the people who needed it most. Unfortunately, the plane, supplies or Roberto never made it to it's destination as the Douglas-DC7 that was carrying Roberto crashed into the ocean almost immediately after take off on New Years Eve 1972. Roberto's body was never recovered. He gave his life to help others and that is why Clemente deserves all the accolades he gets to this day and I feel his number 21 should be retired around the majors, but that's another discussion for another time.

I grew up idolizing Clemente, despite never seeing him play a baseball game, he died when I was just 1 year old. I read all the books that came I could get my hands on, I watched any documentary about him I saw on TV. At times, I would root for the Pirates when I watched Mets games, just because Roberto played for them. I even traded 10 baseball cards for a 1973 Topps Roberto Clemente card, which mysteriously found it's way into a former friend's baseball card collection, denying any wrong doing of course.

When I got back into collecting cards, one of the things I wanted to collect was Roberto Clemente. Of course, as I always do, I got side tracked building my Yankees, Jets, Knicks collections as well as my various player collections. Plus, prices for Clemente cards are pretty high. But I think I can build a really nice Clemente collection without spending a great deal of money. Here is what I have so far: 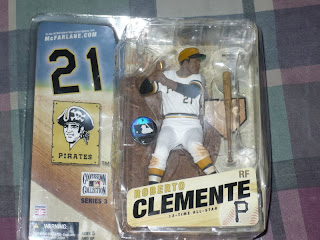 I bought this Clemente McFarlane figure when it was released. Unfortunately, the packaging was crushed under a heavy box. Stupid me. But this will be opened and displayed on a Clemente shelf I am planning on building.

Now, the cards. The cards I have are from recent releases, so I don't have anything mind blowing. But, they are very nice cards nonetheless: 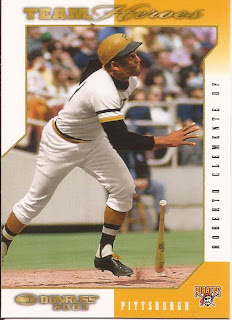 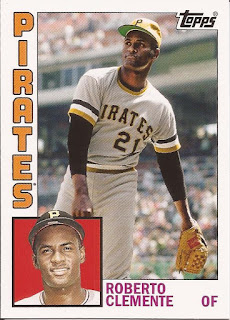 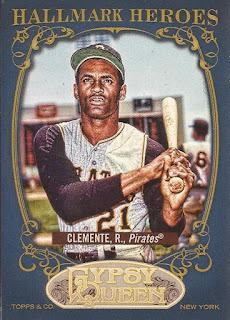 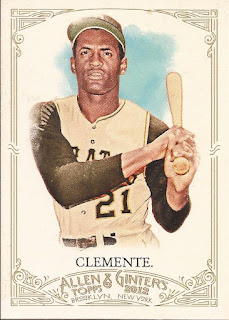 I see Topps used the same picture twice. I'm sure that is not the only time they pulled this stunt. 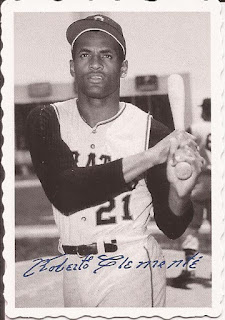 What did I tell you? 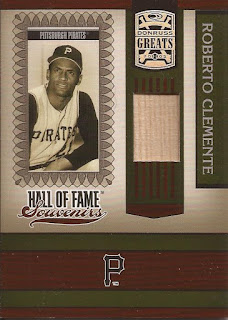 This card is my prized possession in my Clemente Collection. I pulled this card myself from a pack of 2005 Donruss Greats. You couldn't get card off me at no price. It's not worth much, monetary. But it's priceless to me.

I hope to one day be able to add the following in the upcoming months:

- A Mitchell & Ness Clemente Jersey
-Some vintage Clemente cards, if I can find them at a good price
-Some of the Clemente SGA bobble-heads and statues. I have seen some nice figurines and bobble-heads that the Pirates have given away over the years that are affordable. I would love to add them to my collection.

That is just the beginning of what I hope to be a wonderful tribute to a man who gave us his all. It's been 41 years since he left us way too soon. Not a day goes by when I hear his name being mentioned by a sports announcer, a player or someone who is just talking sports. Clemente left behind a terrific legacy, both on and off the field. One that lives to this day through the Roberto Clemente Award, through the Hispanic born players who cite Clemente as an influence and through fans like me who knows a great man when they see one.
Posted by Unknown at 8:56 PM