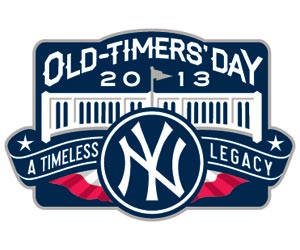 Today is one of my favorite days on the Yankees schedule. Old Timers Day. It's a day when I get to see players I never seen play as well as my personal favorites I did get to see. watching this game always brings me back to when I was a kid and when I first started watching the Yankees.

My first year as a Yankee fan was 1976. As a 5 year old, I was more into Spider-Man, Batman and other superheroes. I don't recall why or how I was watching the Yankee/Royals on October 14th, 1976, but there I was, sitting on my living room floor in front of the TV, watching game 5 of the ALCS. It was a game that would change my life forever. I really don't remember much about the game, but I do remember Chris Chambliss taking Royals reliever Mark Littell deep and bringing the Yankees back to the World Series. I remember running around like a moron, screaming and jumping around when the ball cleared the fence. I had no idea why I was so happy, but I was and I watched the Yankees get swept by the Big Red Machine Reds in 4 straight. The Yankees might have lost that game, but I was hooked for life.

As I was growing up, the Yankees were my life. I would watch the Bronx Bombers win championships and I would choose the players of those 2 Yankees championship teams that would be my favorites. My mom and her friends loved Reggie Jackson. As much as I admired Reggie, he wasn't my favorite. I was a huge fan of Graig Nettles, Goose Gossage and Bucky Dent, especially after I saw him take Mike Torrez deep in Fenway Park during the one game playoff in 1978. I also loved Thurman Munson and was devastated when he was taken from us in 1979.

My very first Yankees game was Tuesday, August 17th when the Yankees played the Royals. It was Pennant Night, which featured a team picture of the 1981 American League Championship team. I don't remember anything about that game, other than waving at a WPIX camera that was pointing at me. I do know the Yankees lost that game 8-4. I still have the pennant, although the condition is terrible. But, I will keep it regardless as a memory of my very first game.

The 80's were not to kind to my Yankees. There wasn't a team that won the AL East other than the 1980 and '81 teams. We did win 91 games in 1983, but finished third, 97 in 1985, but finished 2nd, 90 games in 1986 finishing 2nd. The other teams were barley .500 or under. We went through more managers than Za Za Gabor went through husbands. But I had my favorites during the 80's as well. I loved watching Rickey Henderson and I copied his batting stance whenever I played ball. I still loved Ron Guidry and he was pitching well in the 80's, winning 22 games during the 1985 season. Dave Winfield was a favorite and of course, we had the best player in baseball, Don Mattingly. Watching Donnie Baseball was a joy and I really wished we could have seen a healthy Mattingly for a lot longer than we were able to get.

The 90's didn't start out too good. The Yankees had a last place finish in 1990. But things looked up for the Yankees as they won the first American League Wild Card in 1995 but fell to the Seattle Mariners in an epic 5 game ALDS. The Yankees got the last laugh the next season, winning the first of 3 championships in the 90's, becoming the REAL Team of the 90's. I had my favorites, rooting for David Cone, Mariano Rivera, Jorge Posada, Andy Pettitte, Bernie Williams and of course Derek Jeter. I was telling my girlfriend the other day, I think I have seen just about 95% of Jeter's games. As much as I loved those guys, my favorite players were Paul O'Neill and Tino Martinez. I loved O'Neill's intensity. He always was thinking aout hitting, but he was a top notch right fielder, one who opposing players thought twice about running on. Fans from other teams thought O'Neill was a bit of a jerk for the theatrics when he struck out or made an out with runners on, but I would take 10 O'Neill's on my team any day. Tino was the guy who came after Mattingly retired and he did a great job taking over first. He played Gold Glove caliber first and swung a mean bat, hitting 44 home runs during the 1997 season, finishing second to Ken Griffey Jr for the AL MVP Award.

Today, my love for the New York Yankees is as strong at age 42 as it was when I was 6. It's been 37 years since I watched my very first Yankees game and I know if I live to be 95 I will still be wearing my pinstripes with pride. I will still buy their jerseys, pick up the bobble-heads and figurines, collect their baseball cards and chase after the autographs of former and current Yankees. I will always root for the Yankees, but that's what being a fan is all about. Not getting cynical when your team isn't doing well like some fans I have come across. Always rooting for them and giving the team your undying support. Yes, I love the Jets, Knicks and I root for the Islanders. But the team that has my heart and always will is the greatest franchise in professional sports, The New York Yankees. Watching Old Timers Day always reminds me just how much I love this team.
Posted by Unknown at 11:08 AM