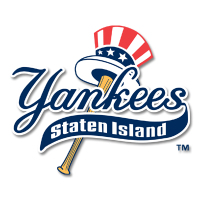 Here are the dates and players featured:

I'm up in the air about the selection of players they used. Brett Gardner, I do agree with. Fransisco Cervelli, while is a nice backup catcher, is not one of my favorite players. Hate his hot dogging. James Molinaro?? I didn't even know who he was until I looked him up and found out he is the Staten Island Borough President. Almost seems like a waste of a bobblehead to make one of him when only he and his family will care about it. Maybe I am being too harsh here, but when you have players like Robinson Cano, Chen Ming-Wang and David Phelps, who have played on your team before, it almost seems like they are players who should have had bobbleheads made before the Staten Island Borough President had one made up. I will get Cervelli and Gardner and take a wait and see on Molinaro. I wish I could show you pictures, but the SI Yankees haven't posted any as of today, which worries me.

I was a partial season ticket holder with the club for 5 seasons. Every year, when I was asked what promotions I would like to see, I always asked for bobbleheads and we never got them. I did get a mini Scooter The Holy Cow bobblehead as a gift from my ticket rep, but we never got any bobblehead promotions until now. I just wish the selection was better.

A picture of the Cervelli bobblehead has popped up on the Staten Island Yankees website: 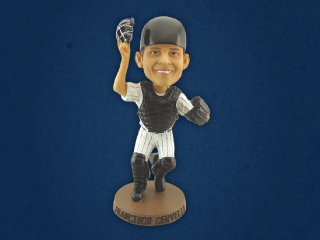 It's a nice bobblehead. Doesn't really look like Cervelli, but I do plan to attend the game and pick up one for my bobblehead collection.
Posted by Unknown at 12:00 PM