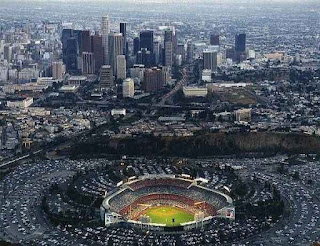 Los Angeles. The City Of Angels. The second most populated city in all of America. Always seemed out of reach to this life long New Yorker. I have always wanted to visit the city that the Red Hot Chili Peppers sang about in "Under The Bridge", but something called money always got in the way. As in I never really had it. It started to look like I would never make my way down to Cali.

Then, this wonderful thing called Twitter came into my life. I found myself tweeting all the time and in time, I started making friends through twitter. It was great. I was tweeting stuff that no one else, save me, cared about. I met like minded individuals on Twitter. I started making Yankees friends, Jets friends, Knicks friends, Islanders and Devils friends, fellow card collectors would tweet with me. It was fantastic.

The one day, she tweeted her way into my life.

This wonderful, gorgeous Yankees fan became a friend and in time, we started sending personal messages to each other talking about the Yankees, Avengers, each others lives and other stuff. Messages led to texting, then to phone calls. We spent so much time talking on the phone. One day, I knew I had too meet her.

Plans were made and I soon found myself on a plane toward Los Angeles. Since I was going to out in L.A., I knew I had to check out the sports arenas and stadiums. This was a dream come true for me. I would finally see all the stadiums and areas I had only seen on T.V. This sports geek was beside himself with excitement.

The first day I was there, I got to see 2 major house of sports for Los Angeles. 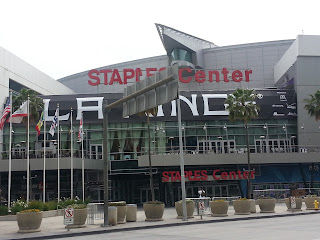 First up was the Staples Center. Home to the Los Angeles Lakers, Clippers, Kings and Sparks. The arena opened in 1999 and still has the look of a brand new arena. Oh look, there is a L.A. Kings banner greeting me. And here I am, still sore about last years Stanley Cup. Great way to greet a visitor. 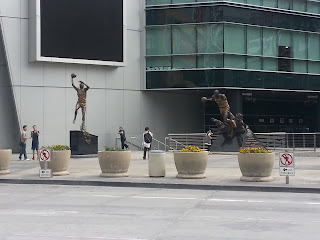 I think the statues are of Kareem Abdul Jabbar and Magic Johnson. I'm sure we will see a Kobe statue out there soon. How about statues of Jerry West, Elgin Baylor and Wilt Chamberlain? I also think Marcel Dionne and Wayne Gretzky should get one also. 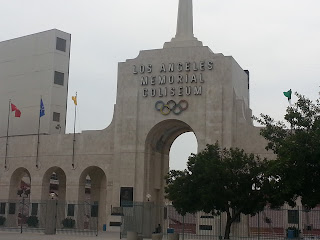 Next up is a personal house of horrors for this Jets fan. The Los Angeles Coliseum. Teams like the Dodgers, Chargers, Rams and Raiders have called this home at one time or another. I have watched the Jets play the Raiders at the Coliseum on T.V. many a time and it usually wasn't pretty. This National Landmark has hosted Super Bowls, World Series and the Summer Olympics. It's currently the home of the USC Trojans.

The next day we took a drive over to Anaheim so I could check out Angels Stadium of Anaheim. Growing up watching the Yankees play the California Angels (and yes, I still call them the California Angels), it's a place I have always wanted to visit and now I was going to. 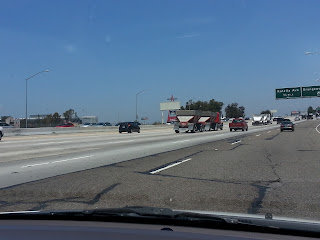 As We got closer, we could see the famous A that used to be on top of the scoreboard. It now sits in the parking lot entrance, greeting fans. 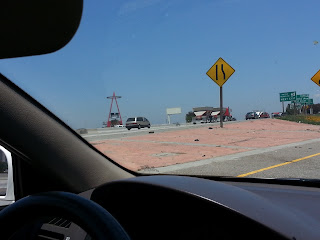 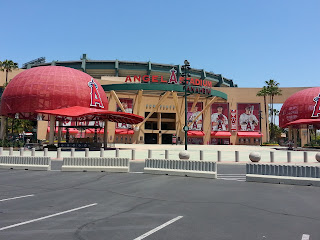 There was no game. The Angels were in Chicago that day, I think. But we took the opportunity to look a round a bit. 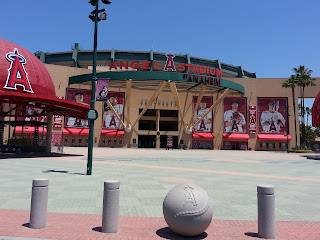 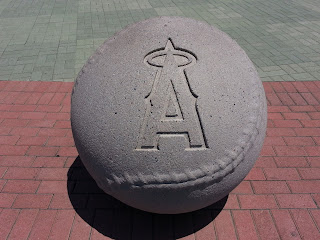 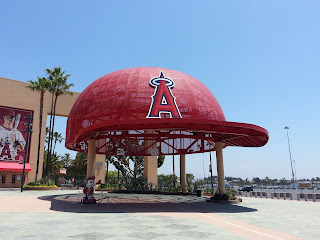 I used to think those giant caps were kind of corny, but after seeing them in person, I kind of like them now. 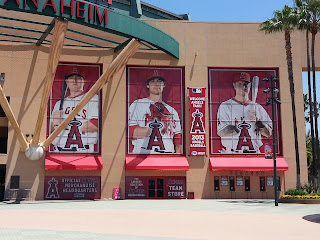 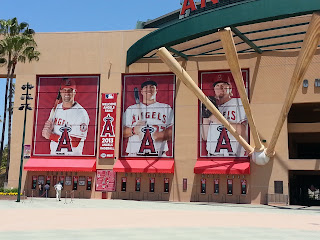 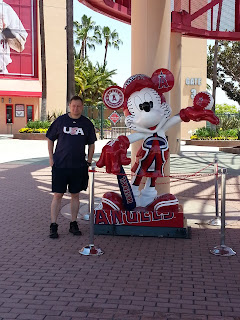 Yes, I know, the chicken legs need a tan.

After taking pictures, we went inside the gift shop for some swag to take home to commemorate my firt visit to The Big A. All I have to say is, a whole lot of red. And I'm a Devils fan. 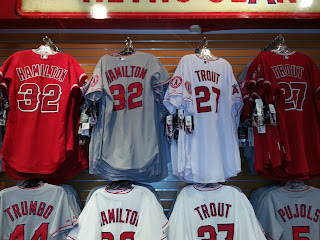 And here is what I wound up taking home 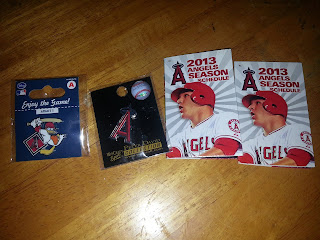 Just 2 pins and a couple of pocket schedules for the collection. I actually wanted to pick up a bobblehead of Mike Trout, but I was afraid of it breaking on the way back to NY, so I went light.

Come to think of it, why didn't I go into the Staples Center's team shop and get some swag from there? I guess I didn't think of it.

That is part one of my trip and tour of various LA Sports meccas. Tomorrow, I will be part 2, Dodger Stadium.
Posted by Unknown at 8:52 PM