Mail day Of Two Players Who No Longer Play In NY

Ah, the mail day. Nothing makes me happier than opening my mail box and finding a package other than bills. As of late, I haven't been able to add anything new to my various card collections, but a few days ago, over on Sports Cards Forum, I was offered a deal that I just could not say no to. The price was right and the cards have found a home in two of my card collections. 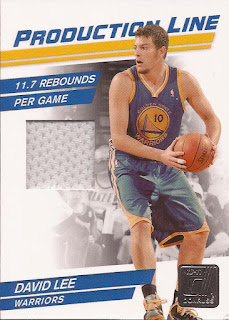 First up is a 2010-11 Panini Donruss David Lee Production Line Game Used card. As of late, I have been trying to stay away from picking up game used cards as the rumors have it that some of these cards aren't exactly game used. Uniform collectors are no doubt breathing a sigh of relief over this, but that means I may possibly have a ton of cards that may or may not be utter garbage. I tend to think that they are actual game used jerseys unless otherwise noted. Maybe that makes me gullible, but I don't care. Ignorance can be bliss. This card is numbered to 399. 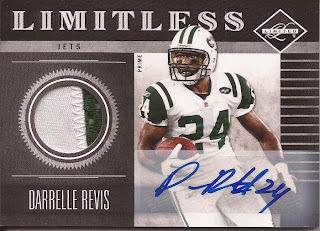 Finally, I was able to add a Darrelle Revis autograph to my Jets collection. I felt like I was Revis Island as getting a Revis autograph proved to be very elusive. I had one one on ebay a few months back only to be stiffed by the seller. Other attempts to add a Revis autograph to my collection proved to be futile. I was able to get the Revis card from the same guy who sold me the Lee card. Originally, he asked me to look through his Photobucket to look at Knicks cards and I had settled on the Lee and a Patrick Ewing game used card. I found the Revis while looking through his football bucket. At the time, it was going to be sold to someone else, but that person dropped out, leaving Darrelle all to this die hard Jets fan. Unfortunately, the Ewing could not be found, but that's OK, I can finally leave Revis Island like Revis left the Jets. Too bad I have to finally get Revis after he is traded. I still think that's a bad move by the Jets. By the way, this card is numbered to 10.

It's been a while since I was able to add some really cool cards and I am very happy I was able to add these to my Jets and David Lee collections. Money has been tight and may be even tighter this summer, so my card additions might be slim for the season. But between trades and the members of my baseball card group, I still should be able to add some cool cards to my various collections. I also have the Yankees bobble-head give-a-ways to attend this summer, so there should be some new goodies added to the Sports Room and I cannot wait.
Posted by Unknown at 6:57 PM