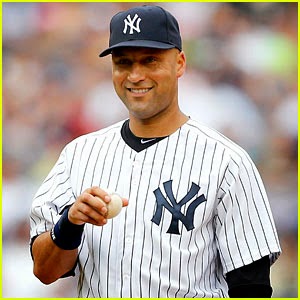 Yesterday was a pretty emotional day in the sports room as I got to watch Derek Jeter's final game in Yankee Stadium. It was a game that had it's highs and lows and everything in between. At the end of the evening, it was the Captain who took matters into his own hands and drove home the winning run in the bottom of the 9th to win the game for the Yankees. Watching the team mob Jeter after and then watching him embrace members of the Core Four, Tino Martinez, Joe Torre and Gerald Williams then walk to shortstop one last time had this geek pretty choked up.

So today, I wanted to celebrate the career of one the greatest Yankees to ever don the pinstripes by doing something that just screams out Sexy Geek. 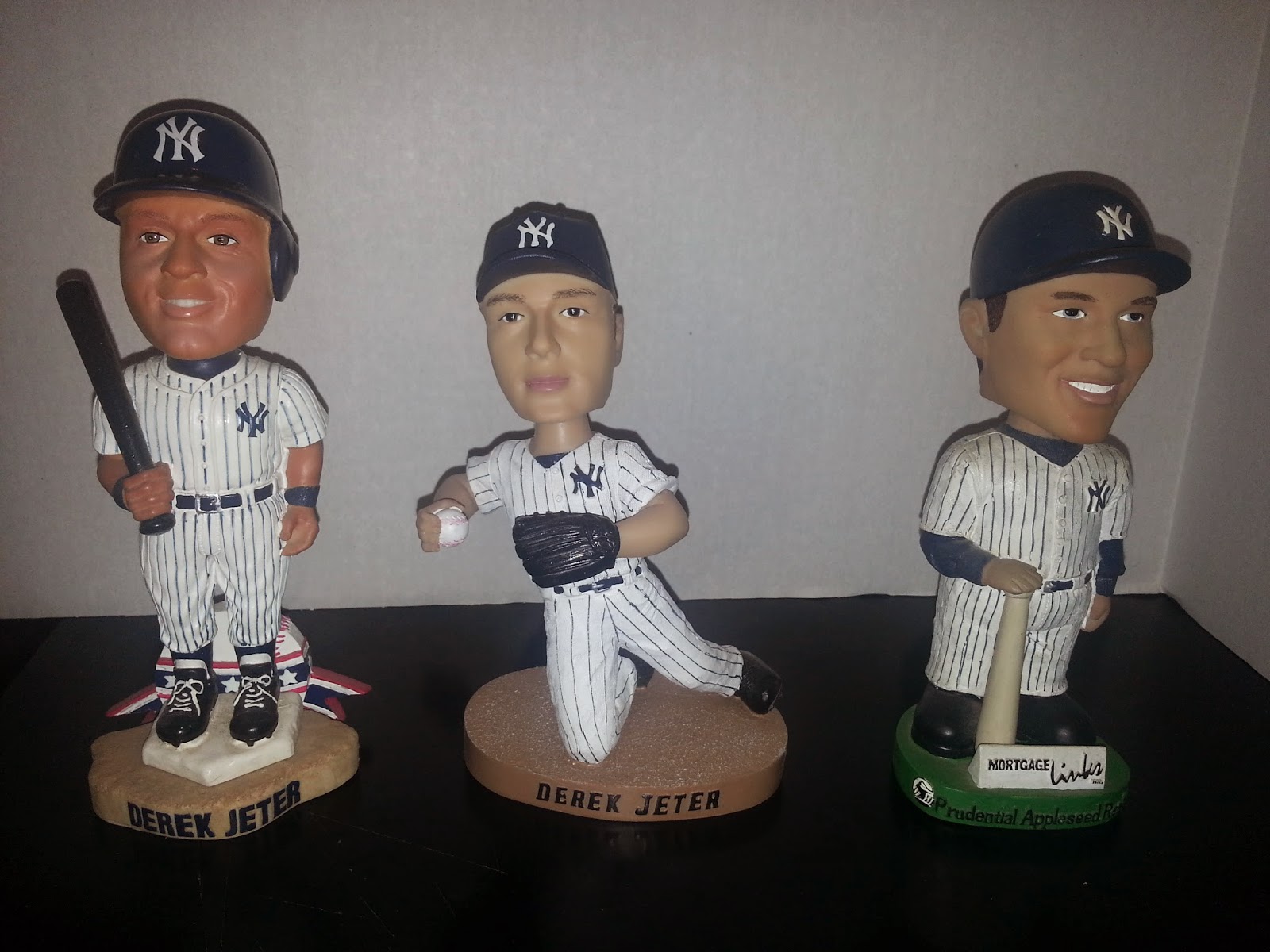 I'm going to show off my Derek Jeter bobblehead collection.

Now, I know my collection is not as large as most Derek Jeter fans. I have been concentrating on adding other Yankees to the bobblehead collection. I will say this though, Jeter is the player I have the most bobbles of in my collection. A big fat 3 bobbles. 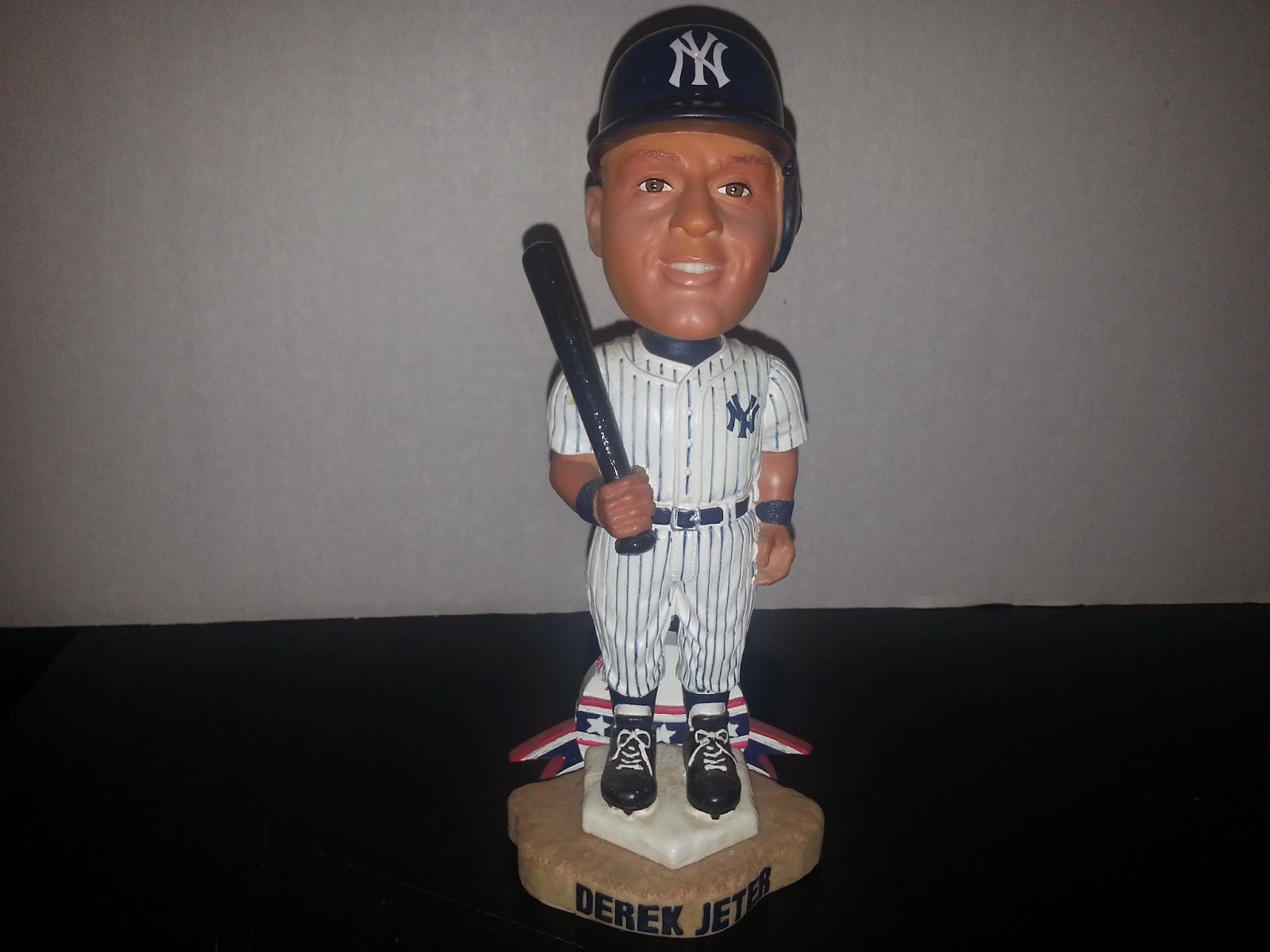 This was my first Jeter bobble I picked up, which was one one of my very first bobbleheads I bought. This is a Forver bobblehead and in an odd way looks more like Derek than any of the other bobbles I own.

I picked it up at one of the Westchester Sports Card Shows along with Whitey Ford and Phil Rizzuto Forever bobblehead figures, none of which look anything like either one of them. This one is a fairly decent likeness. 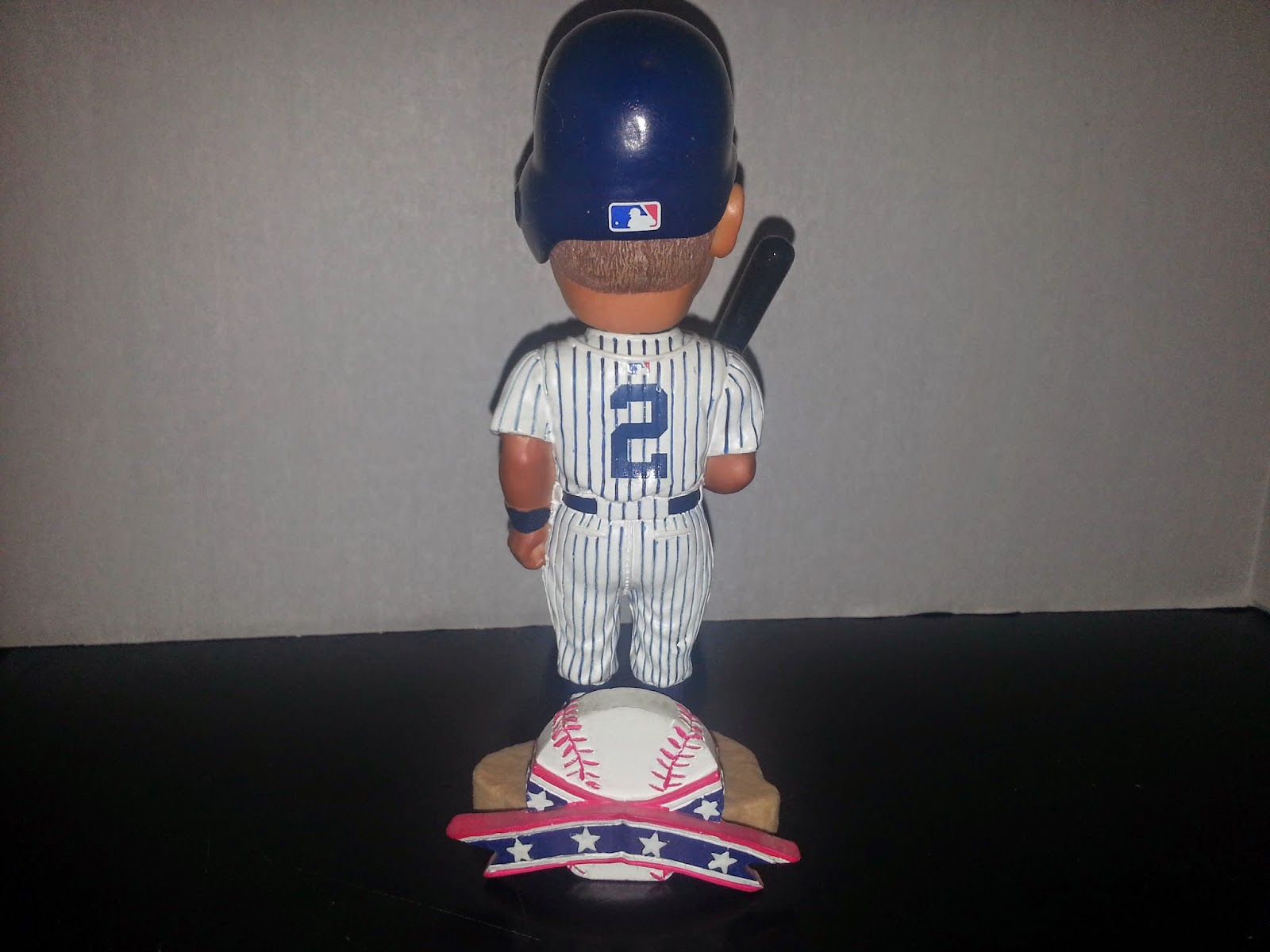 The back has Jeter wearing his # 2 in his glorious Yankee pinstriped on a base that has a baseball and what I guess is a ribbon, It's not one of my favorite Jeter bobblehead figures, but I am glad to own it. Being that it is one of my first ones it has special meaning to me. 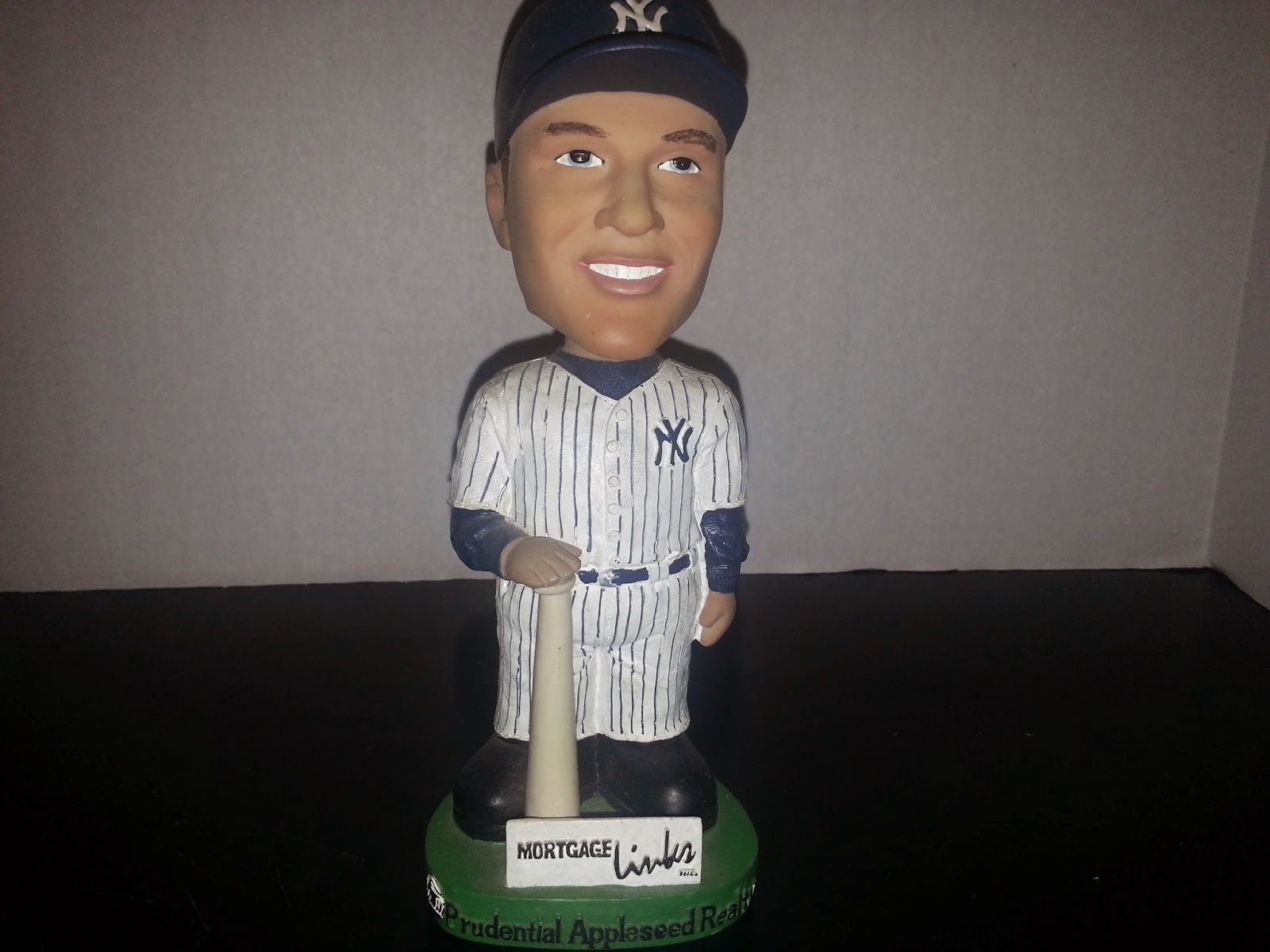 This one was my first Jeter bobblehead that I bought off eBay. It's a 2001 Staten Island Yankees SGA. As much of a fan of the SI Yankees that I am now, I didn't get to a game until 2007, so I missed out on this giveaway. When I found out that the SI Yankees gave out a Jeter, I had to have one and hunted one down that was in my price range. 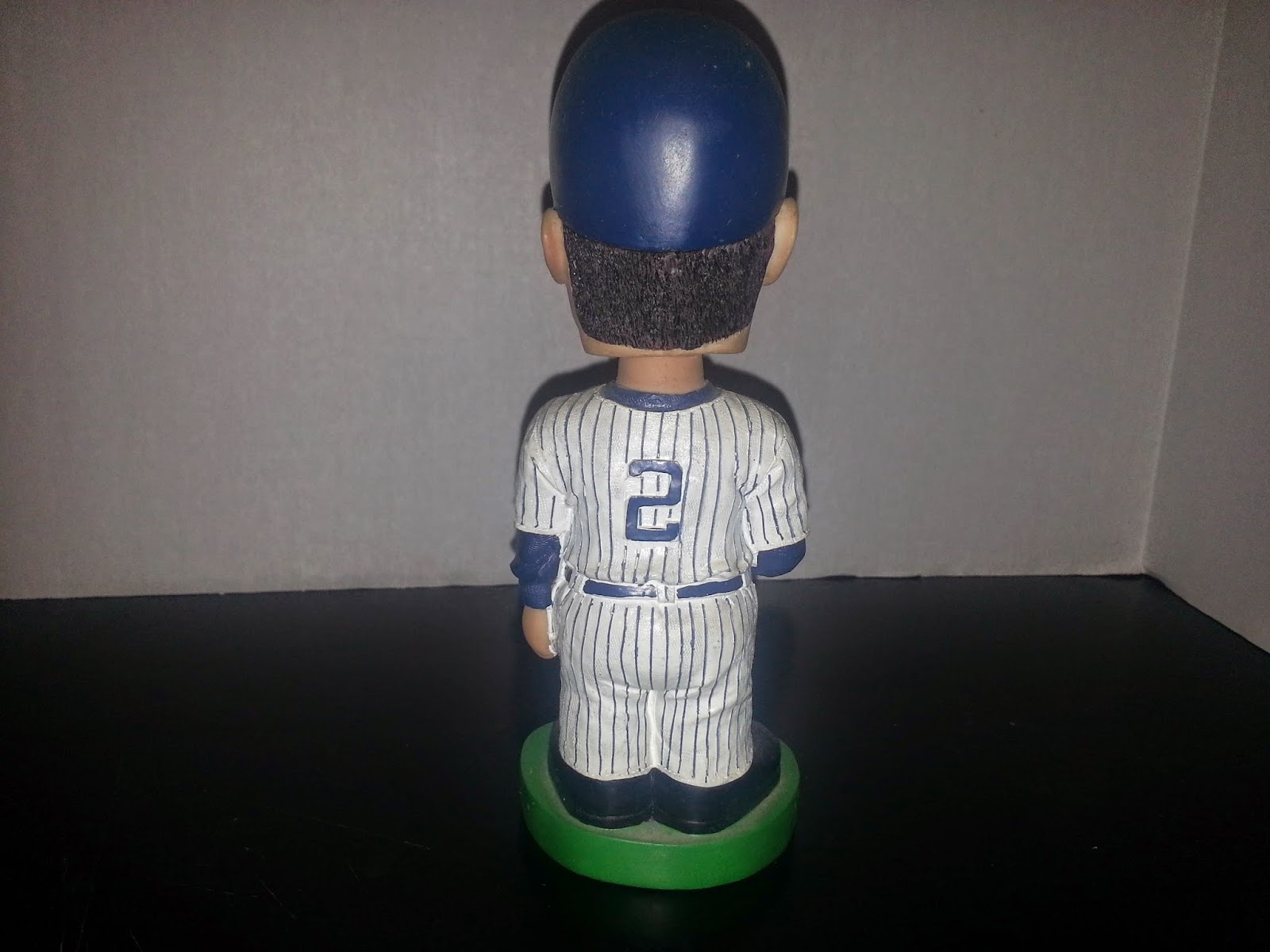 I have always preferred Alexander Global bobbleheads to Forever. Not because I think that their better bobbles. I just love the squatty bodies and almost there likeness that these bobbleheads possess. Unfortunately, their latest attempts at realistic bobbleheads are falling short of the mark. If you don't believe me, take a look at my review of the Mark Teixeira Yankees bobblehead giveaway from this season, Yeesh. 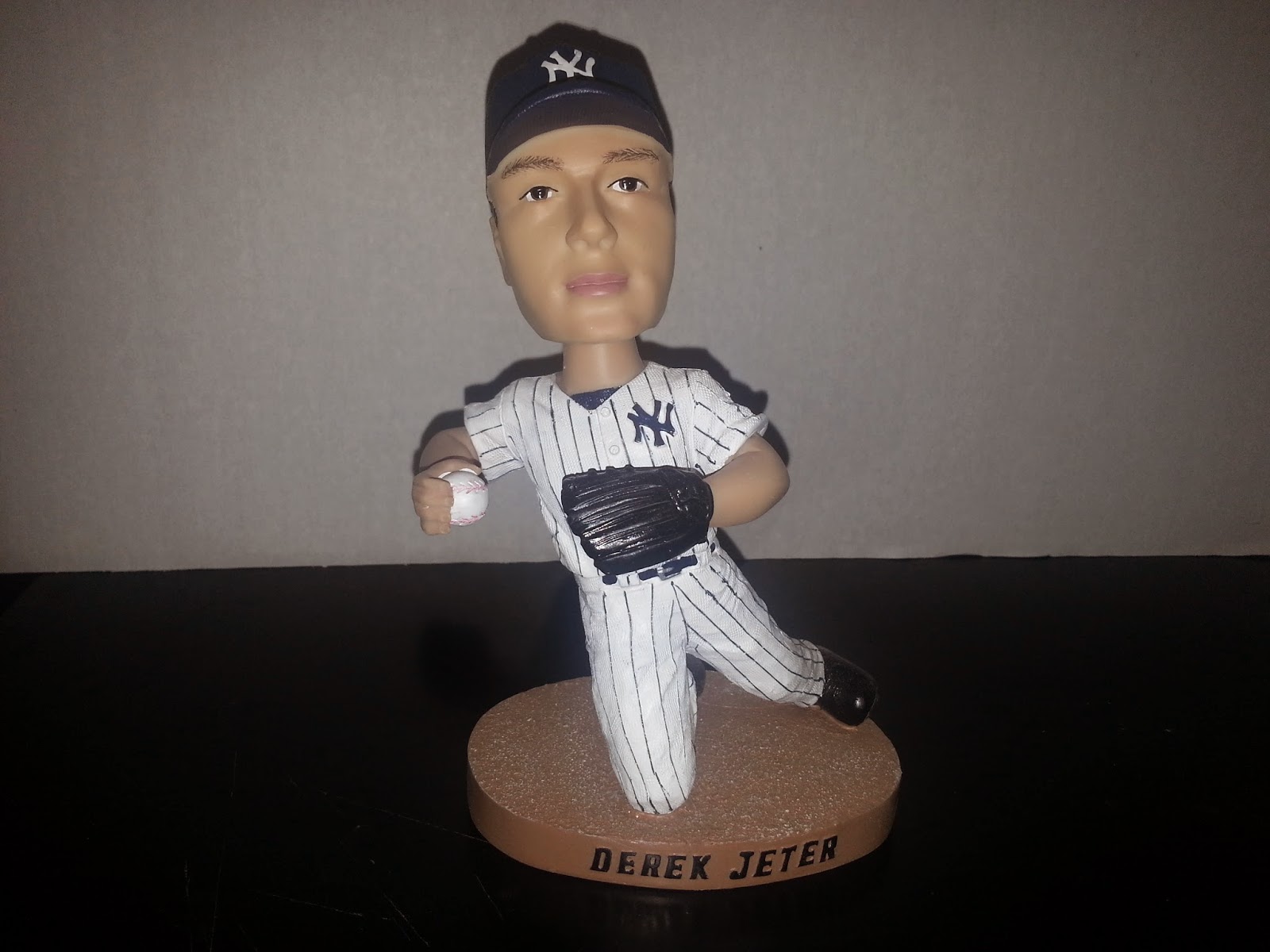 Probably my favorite Jeter bobblehead in my collection. This is a Bobble Dobble Jeter, which is also put out by Alexander Global. I really like the action pose that Derek is captured in. Maybe the face doesn't look too much like Jeter, but I don't really don't mind. 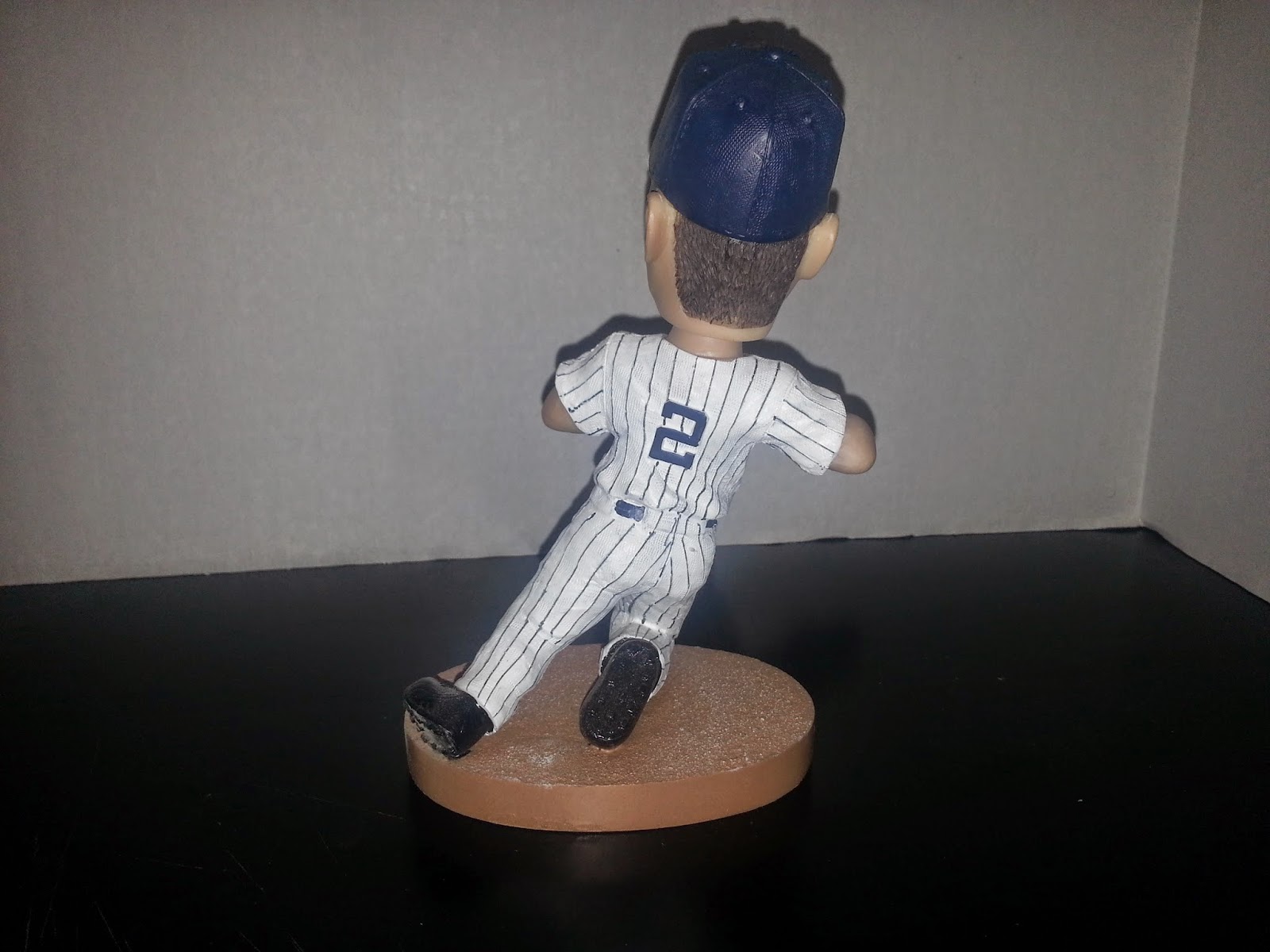 The back is one of the more streamlined figures you will find from Alexander Global. I also have a Jason Giambi Bobble Dobble. There are a couple other I want including the Hideki Matsui fielding, Reggie Jackson and Lou Gehrig Bobble Dobbles.

Although my Jeter collection may not be as large as other collections I am proud to own the ones I do have. I do plan to add some more Jeter bobbleheads soon like the Yankees Universe bobble, the Yankees SGA and a couple of the Jeter Last Season bobbles. I just also saw that there was a September Bobblehead Of The Month, which is a Jeter as well. So, I won't be without choices of quite a few different bobbleheads. With this many choices, I know the Jeter part of my bobblehead will grow and grow fast.
Posted by Unknown at 5:55 PM