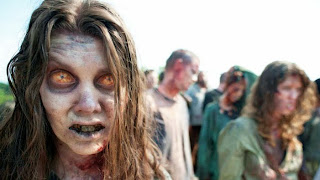 Even Zombies like sports. At times even, some sports teams resemble zombies, trudging along a season as they play emotionless ball. The only difference is the players won't eat your brains. Unless your Dennis Rodman.

Just in time for Halloween, Forever released a set of Zombie figurines dressed up in your favorite team colors. They released sets for MLB, NFL, NBA and NHL. Modell's here in NYC has them for $5.00, so I managed to grab the Yankee figurine and get it home as it was moaning "Brains" and "Arod". 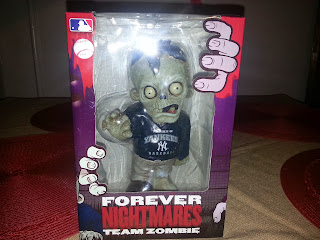 Here is the zombie, which I have dubbed Zack, in it's package. Nice colors on the package, depicting a sunset as Zack the zombie is wandering around looking to score tickets and munch on some brains. 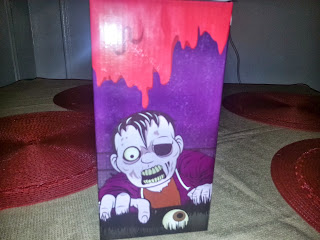 Here is one side of the box. Wonder if the zombie is reaching for the eye to reinsert it or eat it. 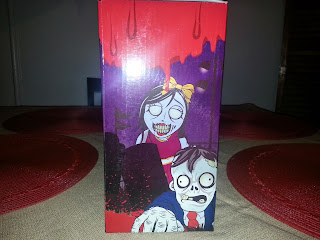 The other side of the box. I guess their team won. Or maybe they're at Sears taking the family portrait. 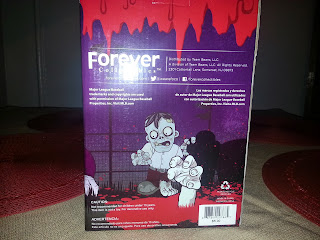 And the back of the box. The hand coming up from out of the grave reminds me of the old horror movie show Chiller Theater when at the beginning of the show, a hand would come out of the grave and feel around. I don't remember the rest because I either ran out of the room or fainted. I'll be right back. 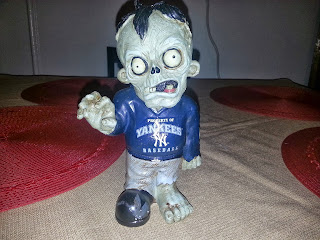 And here is Zack in all his zombie glory. Uh oh, looks like someone forgot his other shoe, For shame Zack, for shame. 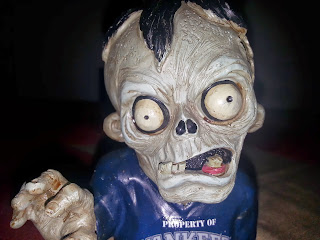 Would you look at the kisser on Zack? Suddenly, that person your buddy wanted to hook you up with doesn't seem so bad all of a sudden, huh? 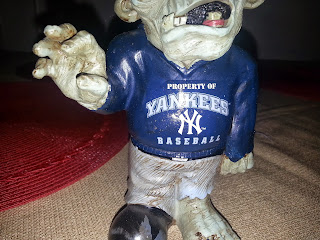 Check out the Property Of The Yankees sweatshirt Zack is sporting. Looking sharp. I used to have the same sweatshirt. Hey, wait a minute... 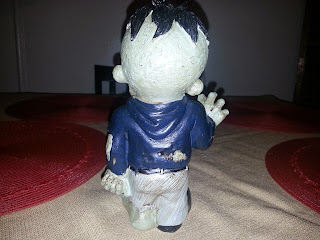 The back of the figurine. Zack, you really need someone to sew up that sweatshirt for you. And get some color while you're at it. 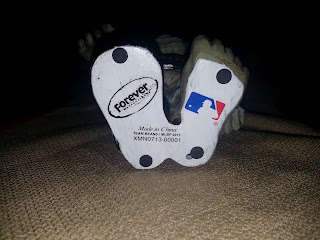 The bottom of the figure has the Forever and the MLB logos stamped under Zack's feet. After a long day of wandering around and munching on brains, we find the zombie, lying down and trying to get some rest.

I think Forever did a great job with this figurine. The sculpting was outstanding and the paint job was flawless. I would definitely pick up the figurines of my other favorite teams. I will be displaying Zack on my Yankee bobblehead and statue shelf. I would definitely recommend these for your collection before they go wandering off.

And if you wake up and find bite marks on your figurines, I would suggest you run out of your place and not come back.
Posted by Unknown at 7:19 PM