Clyde Is Stylin' And Profilin' 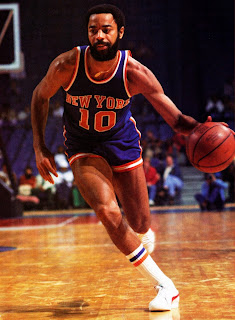 If you are a fan of basketball, especially New York Knicks basketball, then you know the name Walt "Clyde" Frazier. Most Knicks fans know him as a color commentator on Knicks television broadcasts with Mike Breen. The duo has been together for a number of years, first on the radio then moved to MSG broadcasts. Walt is known for his unique style of calling a game, especially his perchant for rhyming during the telecasts. Phrases such as "dishing and swishing", "stopping and popping", and "winning and grinning" make Walt a special breed of broadcaster.

Before Walt was a broadcaster, he was one of the games greatest players. He was drafted 5th overall in the 1967 NBA Draft by the Knicks out of Southern Illinois. During his 13 year career, in which he played for the Knicks and Cavs, Walt was a 7 time NBA All-Star, winning the All Star MVP for the 1975 game. He was also named to 7 NBA All Defensive First Teams, 4 All-NBA First Teams, 2 All NBA Second Teams and won 2 NBA Titles, both with the Knicks. His number 10 has been retired by the Knicks. He was named one of the 50 Greatest players in NBA History and has been inducted into the Naismith Memorial Basketball Hall Of Fame.

So, how do you honor one of the greatest point guards in the history of the game? You give him his own bobblehead, of course.

And not just any bobblehead, oh no. The Knicks got creative with this bobblehead.

Another thing that makes Walt unique is his sense of style. Over the years, Walt has shown a certain flair in the clothes he wears. 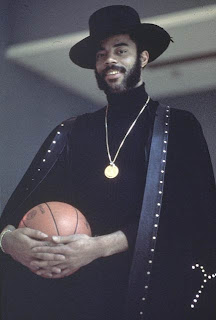 If Walt wasn't a basketball player, I totally could see him playing in a funk band of some kind. 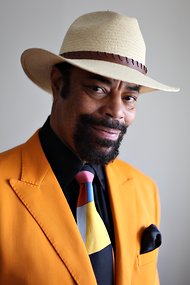 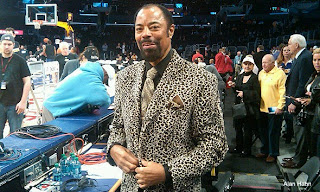 I don't call Frazier the Don Cherry of Basketball for nothing. 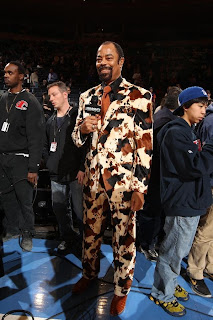 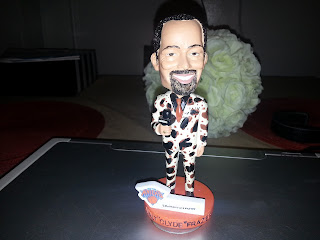 And here is the bobblehead.

I thinkl this is one of the Knicks best bobbleheads, The facial sculpt has a great likeness to Walt. The suit is well done and the paint job was done very well.There isn't anything to complain about with this bobblehead. 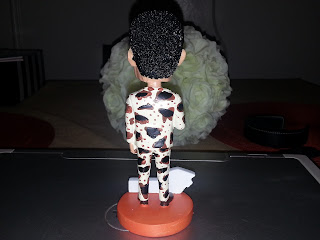 The back of the bobblehead, showing off the suit in all it's glory. 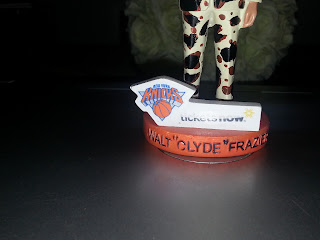 The Knicks orange base with his name done in black and the Knicks logo on top. The sponsor's name is coming off though. That is probably the only flaw in this bobblehead. If I wanted to, I might be able to wipe off the sponsor name and use the base for his autograph.

I love the bobblehead. Like Walt, it's unique from any bobblehead I have seen before. I am very pleased I was able to add this to my Knicks bobblehead collection. Hopefully, I can add his first SGA bobblehead to the collection next.

You have to admire Walt for his style and his willingness to have sofa fabric made up into a suit for public display. But when you are beloved b basketball fans around the world then I guess you can wear whatever you want. Walt Frazier is a one of a kind personality and he will forver be a New York Knick.
Posted by Unknown at 9:28 PM