I recently had the opportunity to add some new autographs to my Yankees, Knicks and Baseball Hall Of Fame collections and I jumped at the chance to do so. I have been cutting back on adding any new cards to my collection because I want to be able to clean up the mess of cards I have before I go out and add more to my collection. I have about 30 plus boxes filled with cards, so if I can make some room before adding more to my collection, it would be great.

But autographs are different.

I don't think I could stop collecting autographs. Along with baseball cards, I have been collecting autographs since I was a kid. I remember waiting outside the players entrance at the old Yankee Stadium and getting players like Lou Pinella, Roy White, Bucky Dent to sign. I also had to deal with rejection when my favorite player at the time, Graig Nettles, turned me down flat. I was 12 years old, you mook. No, I harbor no ill will toward Nettles especially since I got him to sign a bunch of times later in life.

I recently won 2 auctions on eBay and added 2 autographs to my Knicks collection. 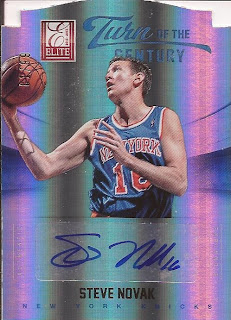 I've been wanting to add an autograph of Steve Novak for a while now. Surprisingly, I had seen some autographs cards of his finish in the 12.00 to 15.00 range and I really didn't want to pay that much for him. I waited until I could grab this one for less than 3.00, shipped. Novak was pretty dangerous from behind the arch and now Novacaine will be bringing his "Discount Double Check" to Toronto. I wish him the best, just not against the Knicks. 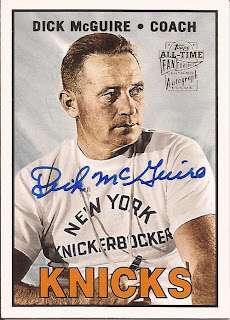 I didn't really need a Dick McGuire autograph since I got him a few times through the mail before his passing. But anytime I can see a Hall Of Fame player's autograph for around the same price that I paid for the Novak, I'm jumping on it. He was a seven time All Star, played in 3 NBA Finals in the 50's and had his number 15 retired by the Knicks. I have been wanting to collect the autographs of some of the early Knicks stars and McGuire was certainly one of them.

I recently made a deal with my good friend and fellow blogger, Dodgerbobble for some autographed baseballs I needed for my Yankees and Baseball Hall Of Fame Collections. Thanks to Josh, I was able to add these two autographs to my collections: 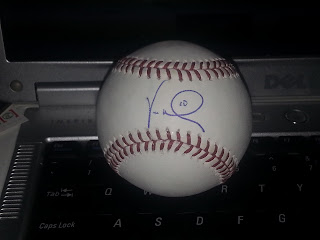 Vernon Wells came over to the Yankees in a trade with the Angels to play left field when Curtis Granderson went down during spring training. Wells, even though he had a good spring, was thought to be nearing the end when the Yankees got him. He's currently platooning in left field with Alfonso Soriano and is hitting .246 with 11 home runs and 42 RBI's. Although his number is not 10 with the Yankees, I'm still glad I could add this autograph to my Yankees collection. 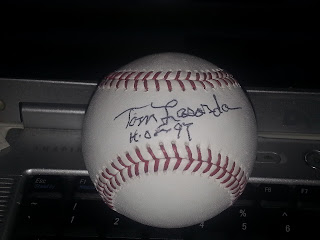 Here is an autograph I didn't think I would have in my collection. Josh was kind enough to trade me this Tommy Lasorda signed ball for my Hall Of Fame collection. It's got a Steiner hologram and Steiner certification to go along with it. Even if it didn't have it, I would have still pulled the trigger on the deal as I trust Josh. Thanks for the deal, buddy.

This past Saturday, I went to the East Coast National, which was held at the Westchester County Center. Gaylord Perry was doing a free signing at the show, so I went early because I knew that there would be a long line to get a free autograph of a Hall Of Fame pitcher. 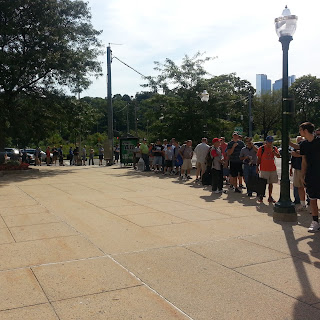 And I was right. Lucky for me, I was closer to the front of the line then the back. And after about a 2 and a half hour wait, I scored Perry's signature on a baseball 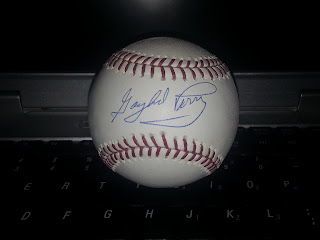 He didn't put the HOF inscription on the ball because that wasn't free. I would have had to had paid 10.00 for it. Since it doesn't have the inscription, I am counting this toward the Yankees collection. This is number 35 in the Yankees signed baseball collection.

Being able to add 3 signed baseballs to my collection made me hungry for more. I will be keeping an eye out for player appearances and I may even try to wait outside Yankee Stadium and hope a player may actually come out and sign. I'm sure I have a better chance of Derek Jeter inviting me into the ballpark as his guest than that happening. But if it did, it would take me full circle to when I was a kid, clutching my bag full of baseball cards, hoping for a Yankee to come over and sign his name on my card.
Posted by Unknown at 8:17 PM