The Start Of A New Collection: Pocket Schedules 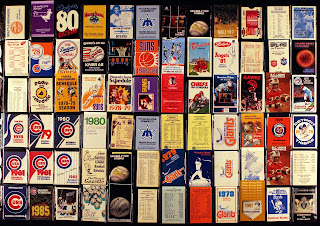 I recently embarked on starting 3 new collections; 2 for the Yankees PC and one of a player that never played a game for the Yankees. Today, I am going to discuss my new Yankees pocket schedule collection.

Collecting pocket schedules is something I have thought about collecting, but never really pursued them the way I would an autograph or a bobble-head. I always picked up a pocket schedule when I went to a Yankees game or was in a team store. I would pick it up, look it over then just casually put it aside, never really looking at it again.

I remember as a kid eagerly awaiting the release of the Preliminary schedules the Yankees would release in February. I remember going to Yankee Stadium with my buddies to pick up these larger schedules that would give you the dates of games, price of admission and would hawk their season ticket packages. As a kid, I would always look for the SGA dates, but those were never released on the preliminary schedules. I always saved them until my mom would tell me they were clutter and toss them out. I wish I still had them.

I have always wanted to collect yearbooks and programs, but with the prices on those being a bit high, I realize that pocket schedules fit my budget and also gave you a glimpse into where the team was at that point in their history. It's pretty cool looking through them, seeing where the team was on my birthday, what they gave out that year and the price of tickets at that point. The prices have skyrocketed from when I started going to games, I can tell you.

I don't have many in my collection right now, just 9 schedules, 6 of them are Yankees . I am pretty sure I have more somewhere, but here are the ones I have right now: 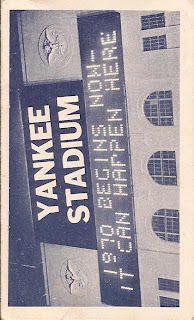 1970 Yankees Schedule. This I just picked up of eBay for a low price. I had seen other 1970 schedules go for as much as 20.00 and that was a price I was looking to avoid. I got this one for under 5 bucks and the seller included a 1966 Topps Yankees Team Card which I need for my Yankees card PC. 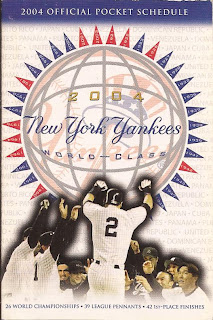 2004 Yankees Schedule. I had this one in a drawer with some other pocket schedules. The condition is not bad, but not great. There's fraying on the top of it. When I can, I will replace this one. 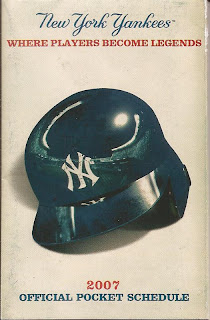 2007 Yankees Schedule. Another which falls into a less than perfect conditioned schedule. 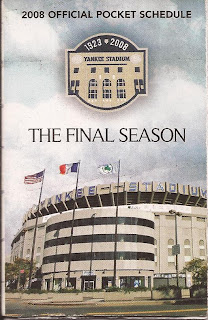 2008 Yankees Schedule. As with the others, the condition is not the greatest. Fraying on the bottom of the schedule this time. This season is near and dear to my heart. I got to the Futures Game for All Star Weekend and got to enjoy my final few times in a place I considered my second home. I am not ashamed to say I cried while watching the Yankees take the final lap around the Stadium as Frank Sinatra's "New York, New York" played in the background. I miss that place to this day. 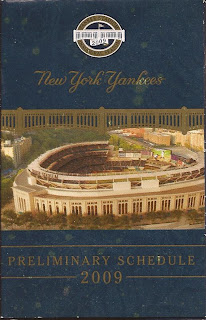 2009 Yankees Preliminary Schedule. Without a doubt this is in the worst shape of all my schedules. Would actually be in perfect shape if not for all the water marks on it. The good thing about collecting pocket schedules is that these are all easily replaced at a great price. 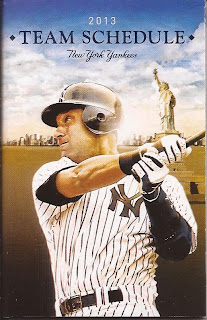 2013 Yankees Schedule. Picked this one up at the Yankees team store recently. The Yankees have started printing up multiple schedules with different players on the cover. I have this Jeter. 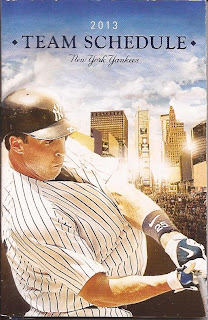 And this Teixeria, which I keep in my Teixeria PC Binder along with the 2008 Braves Schedule with Tex on the cover. I also picked up an Andy Pettitte Schedule which I forgot to scan.

I also have a few non-Yankees pocket schedules: 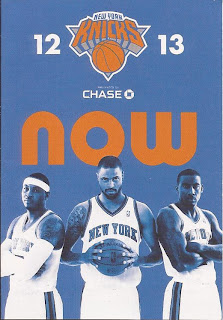 2012-13 New York Knicks Schedule with Carmello Anthony, Tyson Chandler and Amar'e Stoutmire on the cover. Grabbed this at MSG when I was in the area. I also grabbed a 2012-2013 New York Rangers schedule which is definitely for trade. 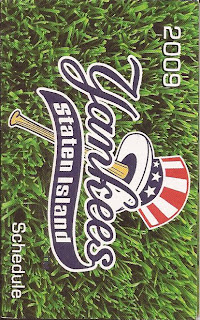 2009 Staten Island Yankees Schedule. I was a season ticket holder with them for 5 years and this is the only schedule I managed to pick up. I will pick up this years when I take in a game, for sure. 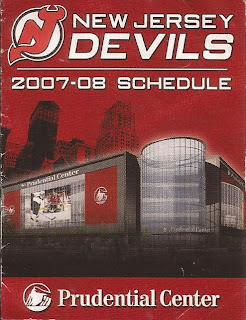 2007-08 New Jersey Devils Schedule. It's beat up, that's for sure. But I won't be replacing it as it's from my very first Devils game. I have been a fan since the 1990-91 season and never made it out to the Meadowlands to see a game, but went to the celebration they had for the 2002 Stanley Cup, go figure. I had this schedule in my pocket the whole game and it came out in pretty bad shape because of it. Because of the sentimental value, it will stay in my collection.

My goal with my Yankees pocket schedule is to collect from 1970 seasons to present day, same with the Jets and Knicks. With the Devils, I'll start with their first season and move on from there. I just need to find pocket pages that fit them as the nine pocket pages are too small for the current schedules.

I am looking forward to add to my pocket schedule collection. I think it's a fun and cheap way to enjoy your teams history as well as they are cool to look through. If you also collect schedules, leave the link to your collection in the comments below. I would love to look at your collection.
Posted by Unknown at 8:27 PM